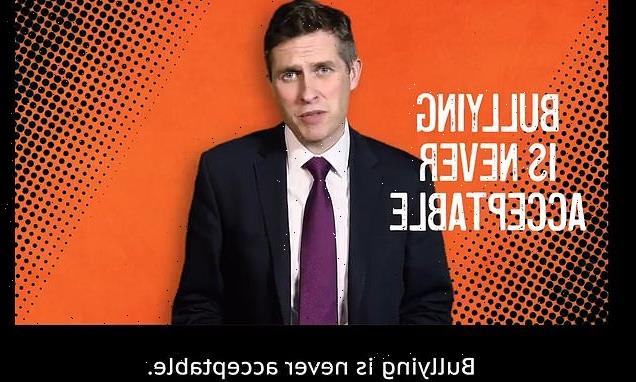 Disgraced former minister Sir Gavin Williamson has been accused of ‘rank hypocrisy’ after a video of him fronting an anti-bullying campaign emerged.

The 46-year-old was last night forced out of a Cabinet role for the third time in three-and-a-half years as he faced a slew of allegations about his behaviour.

Sir Gavin, who was only appointed as a Government minister by Rishi Sunak two weeks ago, has now quit after sending expletive-laden messages to a fellow Tory MP.

He also faced claims he told a senior civil servant to ‘slit your throat’ and ‘jump out of the window’.

The ‘bullying’ claims against Sir Gavin have exposed the Prime Minister to intense scrutiny over why he appointed him to a Cabinet Office role in the first place.

Critics have also now seized on a 2020 video in which Sir Gavin, who was education secretary at the time, fronted a campaign for that year’s ‘Anti-Bullying Week’.

In the video, Sir Gavin declared: ‘Bullying is never acceptable.’

He also laid out Government’s plans to ‘improve behaviour in every school’ to make ‘classrooms calm disciplined places’.

‘I want children to be able to celebrate their differences and what makes each of them unique,’ he added.

‘Working together, we can make sure every child grows up feeling confident and free to be themselves and stamp out bullying.’ 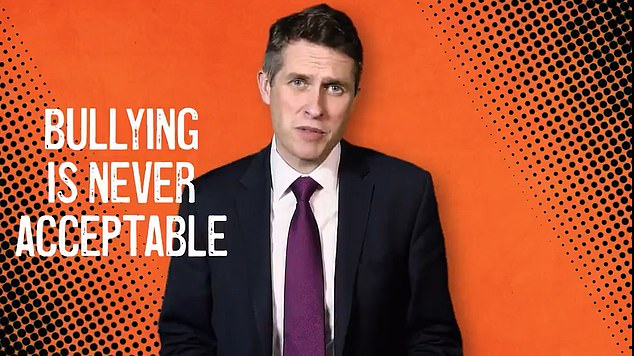 Critics have seized upon a 2020 video in which Sir Gavin Williamson, who was education secretary at the time, fronted a campaign for that year’s ‘Anti-Bullying Week’ 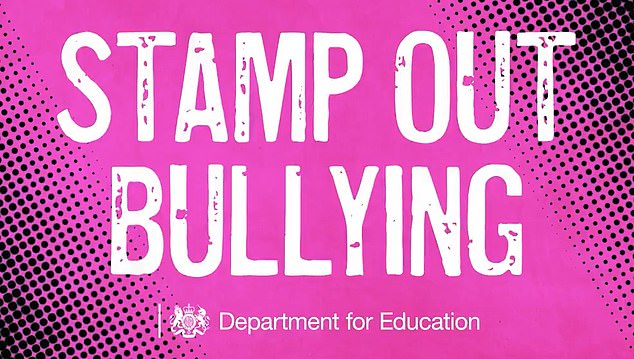 ‘I want children to be able to celebrate their differences,’ Sir Gavin said in the video. He is now facing claims he used ‘salacious gossip’ – including about sexual preferences – as ‘leverage’

Other allegations to have emerged against Sir Gavin in recent days included claims he boasted of ‘owning’ an MP given help when they encountered financial difficulty.

He was also said to use ‘salacious gossip’ – including about people’s sexual preferences – as ‘leverage’ against others when he was Tory chief whip.

And Sir Gavin was claimed to have sent a sweary email in 2016 referring to a female civil servant’s inquiry about why a minister had to change travel plans to attend a vote.

‘Always tell them to f*** off and if they have the bollocks to come and see me. F****** jumped up civil servants,’ he was said to have written.

Commenting on the 2020 anti-bullying video filmed by Sir Gavin, Liberal Democrat MP Munira Wilson said: ‘This exposes the rank hypocrisy and double standards at the heart of this Conservative government.

‘Gavin Williamson himself admitted that bullying is never acceptable.

‘Schools rightly have a zero tolerance approach to bullying. But once again it seems it’s one rule for Conservative ministers and another for everyone else.’

In the same week as Sir Gavin’s anti-bullying video was published in 2020, Mr Sunak also sent a Facebook post in support of Anti-Bullying Week.

Sir Gavin is facing a series of investigations into the allegations against him.

The offensive messages he sent to former Tory chief whip Wendy Morton earlier this year, in which he moaned about being excluded from the Queen’s funeral, are being probed by Conservative Party officials.

Ms Morton is also said to have reported them to parliamentary authorities.

And last night the former Ministry of Defence official who was allegedly told by Sir Gavin, when he was defence secretary, to ‘slit your throat’ also lodged a formal complaint to Parliament’s Independent Complaints and Grievance Scheme.

‘This was an incredibly difficult period for me. Gavin Williamson’s words and actions had an extreme impact on my mental health,’ they said. 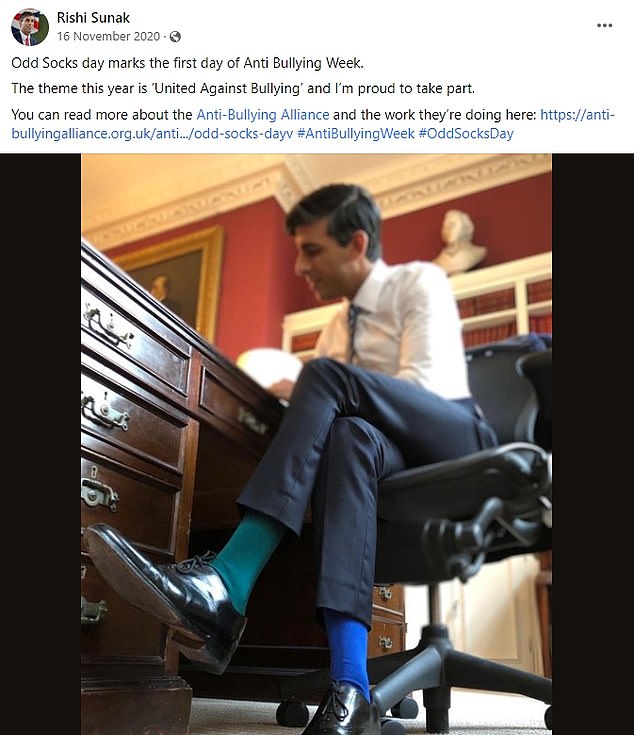 In the same week as Sir Gavin’s anti-bullying video was published in 2020, Rishi Sunak also posted on Facebook in support of Anti-Bullying Week 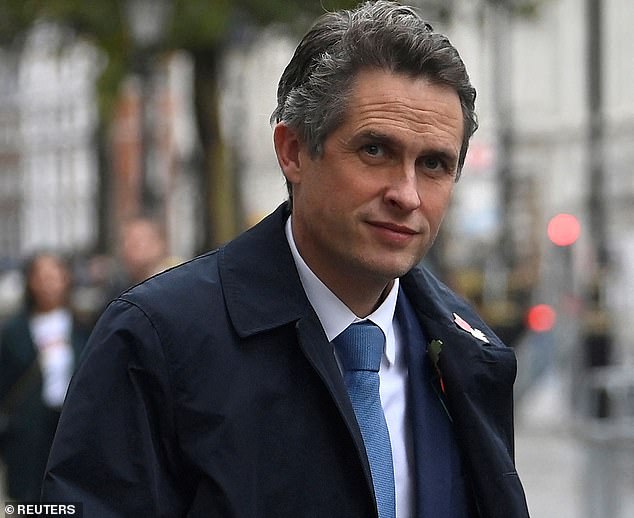 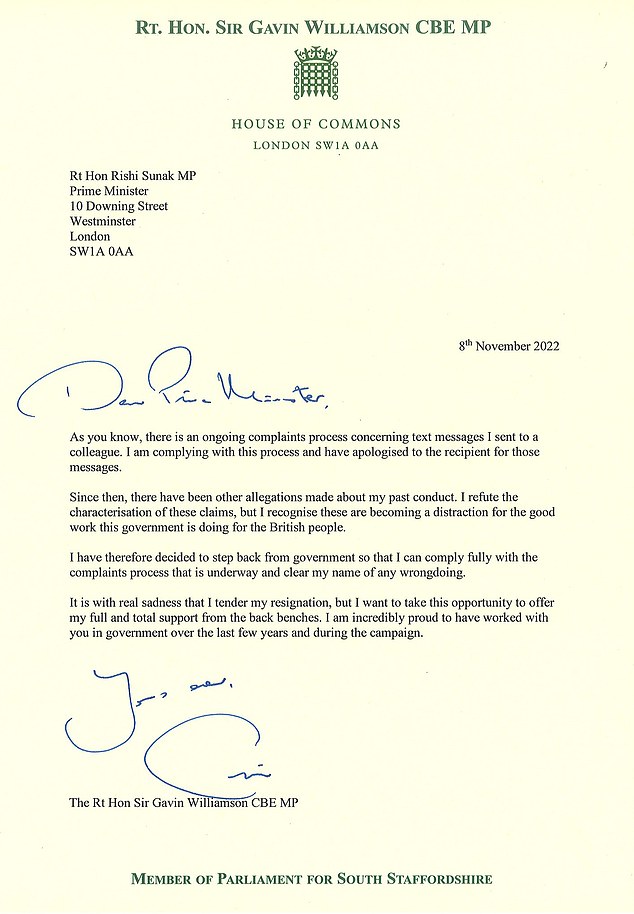 In his resignation letter to the PM last night, Sir Gavin said he had apologised to Ms Morton over the expletive-laden WhatsApp messages he sent her.

He added: ‘Since then there have been other allegations made about my past conduct. I refute the characterisation of these claims, but I recognise these are becoming a distraction for the good work this government is doing for the British people.

‘I have therefore decided to step back from government so I can comply fully with the complaints process that is under way and clear my name of wrongdoing.’

In reply, Mr Sunak said it was ‘with great sadness that I accept your resignation’.

Sir Gavin was sacked as defence secretary in by former PM Theresa May in 2019 following the leaking of confidential National Security Council information.

And he was dismissed as education secretary by Boris Johnson last year following what was widely viewed to be his disastrous handling of school closures and exams during the Covid crisis.