In a storage container on a property in Melbourne’s outer north was an arsenal of weapons fit to arm a platoon. It concealed dozens of semi-automatic handguns and revolvers, Israeli-style machine guns, shotguns, rifles and a machine gun powerful enough to be fitted to a Spitfire fighter plane.

Knives, bows, arrows, slingshots, inert improvised explosive devices, detonators, ammunition, a ballistic vest and four kilograms of precursor chemicals used to manufacture explosives were also among the cache, which was so significant it took officers two raids of the property to uncover it all. 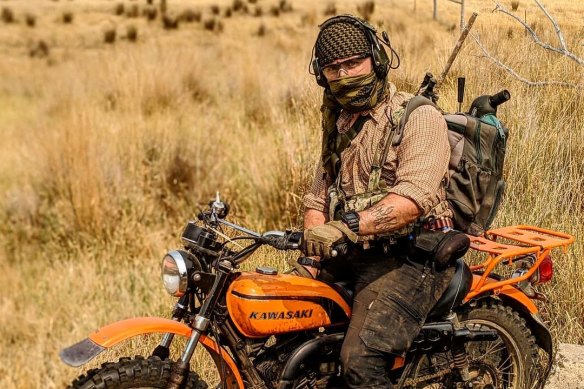 The haul immediately raised questions about the origins of the weapons and about how illicit firearms, including high-powered rifles and sub-machine guns, end up in sheds and suburban Melbourne streets.

Since the start of this year, there have been 11 fatal, and 15 non-fatal, shootings in Victoria. Guns have been used to scare the driver of a luxury car during a road rage attack, settle disputes among warring suburban gangs, commit murder and carry out the attempted hit on ex-Mongols bikie Suleiman “Sam” Abdulrahim.

Known as “The Punisher”, Abdulrahim was sprayed with bullets as he drove from a funeral in Melbourne’s northern suburbs in June. His two masked attackers spectacularly crashed their getaway car into a fire hydrant as they fled the scene before carjacking a woman and child at gunpoint.

The pair fled overseas within hours and are yet to be arrested and charged by police. Abdulrahim survived the attempted hit despite being critically injured.

More than 25 years after the Port Arthur massacre and the ban on assault rifles, Victoria still has a gun problem. Police statistics show gun offences are rising after a lull during the pandemic.

In the past week, authorities seized 80 firearms, 18 imitation weapons and 75 guns in the state as part of Operation Athenea, a nationwide campaign to clamp down on the making and trading of illegal firearms.

There are about 3.5 million registered firearms in Australia and a quarter of a million illicit ones. Associate Professor Philip Alpers, who maps the use of guns in Australia and other nations, said many of the guns now used by criminals in Melbourne had been in Australia for years. 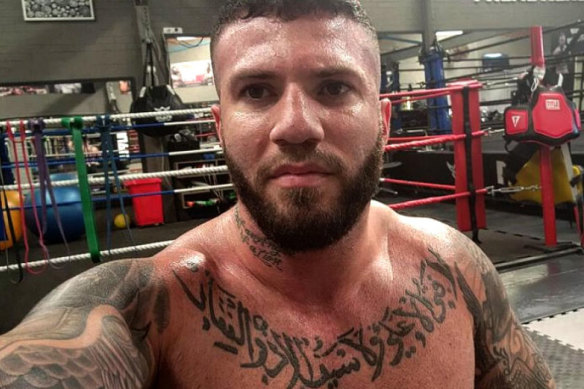 Sam ‘The Punisher’ Abdulrahim in a photo from his Instagram page.Credit:Instagram

They are “grey market” firearms – guns once sold legally that weren’t handed in during the government’s 1996 buy-back program.

“One of the guns they found was a revolver, a fearsome-looking thing from the Boer War,” he said. The bitter colonial war between Britain and the self-governing Afrikaner republics in South Africa ended in 1902.

Alpers said a gun had a long decay curve, meaning “if you look after it, keep it oiled, prevent it from rusting and don’t fire it too much, it will last centuries”. This makes them prized commodities among criminals, who often source them from the black market or steal them from licensed shooters.

Sawn-off shotguns have become the weapons of choice for criminals. Police intelligence suggests crooks cruise the streets of small towns looking for vehicles parked in driveways with the bumper stickers of gun manufacturers, which indicate the occupant likely has guns. 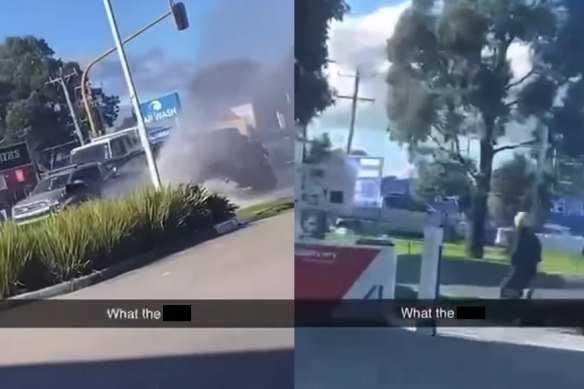 Images from a video showing the crashed getaway vehicle and one of the masked gunmen running from the scene after allegedly shooting Abdulrahim.

Once they crack open the gun safe, they often cut the barrel and handle of the shotgun, both illegal modifications, so the hunting tool can be tucked into a belt and quickly drawn.

Alpers said criminals were also increasingly looking overseas, including the United States, for crucial parts, such as barrels, triggers and breeches. Those are often sent in separate parcels or smuggled inside sea containers through Australian ports.

Intelligence from the Australian Border Force indicates the bulk of firearms and parts smuggled into Australia come disclosed as other cargo from China.

“A lot of those containers can’t be X-rayed to the degree of sophistication and strength that you need to pick up a part that small, so if you’re importing a car, you might hide an entire gun inside the engine block,” Alpers said. 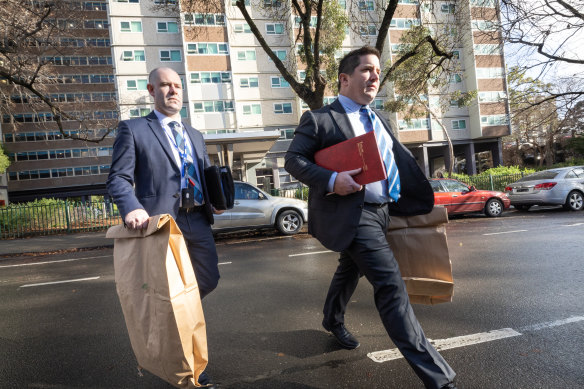 Investigators leave a public housing block in Fitzroy after a man was shot dead nearby.Credit:Jason South

Once the parts have made it to their destination, criminals use blueprints available online to build “ghost guns”; firearms that don’t have a serial number and cannot be traced. Most recently, this has included using 3D printers to manufacture the body of a weapon.

In the past, 3D-printed guns were notoriously unreliable, exploding on the shooter’s hands or backfiring. However, Alpers said designs were becoming increasingly sophisticated and incorporated breeches and barrels made of steel that turned them into semi-automatic weapons.

Law enforcement agencies are growing more concerned about the homemade weapons falling into the hands of organised crime syndicates after making significant seizures in Victoria, NSW and South Australia.

“In my career, this is really recent technology. It’s concerning,” Victoria Police Crime Command acting commander Paul O’Halloran told reporters. “We need to do everything we can to prevent this from occurring.” 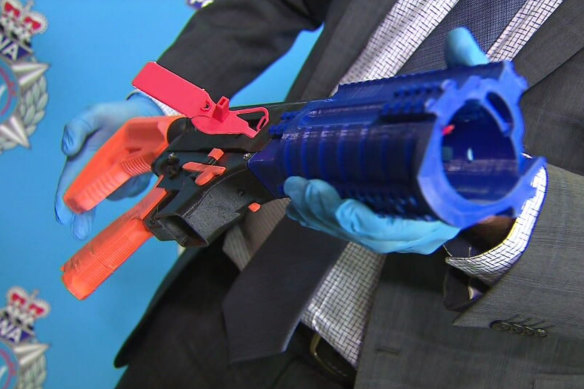 West Australian police recently confiscated from a teenager a 3D-printed semi-automatic assault rifle capable of firing 15 rounds of ammunition in a single pull of the trigger. The toy-looking weapon had allegedly been printed and assembled by the 18-year-old at a home.

In Victoria, police uncovered a gun-trafficking outfit operating out of two homes in Melbourne’s northeastern suburbs last week. The arsenal of 48 guns included eight homemade firearms, four of which were military-style weapons. It is alleged that 3D printers were also used in the operation.

“There’s no doubt at all there’s a worrying trend about illicit firearms coming into the country, and, of course, they have to be illicit because once they get here, they’re banned,” he said. 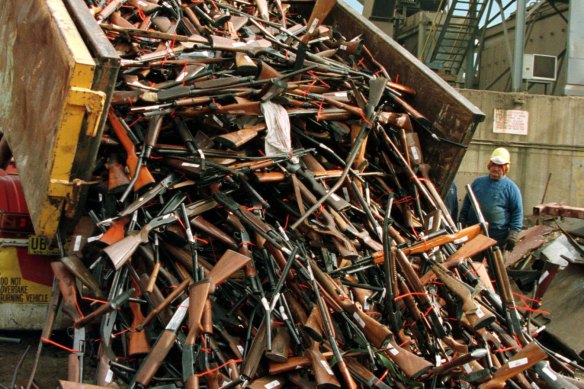 A truck unloads prohibited firearms at a scrap metal yard in 1997 after the Port Arthur massacre a year earlier.Credit:Reuters

While the number of firearms intercepted at the border has dropped in the past two years due to pandemic-related disruptions to air mail and shipping routes, Australian Border Force officials nabbed more than 970 undeclared guns, parts and accessories at the border in the past financial year alone.

Those were in addition to more than 1000 illicit guns confiscated by Victoria Police in 2021.

Data from the Coroners Court of Victoria shows guns are far more likely to be used in self-harm incidents than fatal shootings. Since the start of the year, 11 people have died in shootings, compared to 26 instances of suicide.

However, statistics indicate gun violence is on the rise following the lockdown lull, which saw fatal shootings halve from 16 in 2019 to eight each year in 2020 and 2021. Gun violence tends to follow a cyclical pattern, with spikes in shootings followed by periods of relative calm.

Graham Banks, acting superintendent at Victoria Police’s anti-gangs division, believes firearm prohibition orders are making a dent in gang-related shootings. When a person has one of these orders imposed on them, they are prevented from acquiring or carrying a firearm, and police have additional powers to search them if they suspect they might be breaching the order.

There are more than 1600 active orders in Victoria which have led to police taking about 150 illicit firearms, parts and ammunition off the streets since the program was introduced in 2018.

“History has shown time and time again that when violent criminals have access to illicit firearms, it will often end in tragedy,” Banks said. “Where firearms are involved in an incident, often only millimetres decide the deadly consequences.”