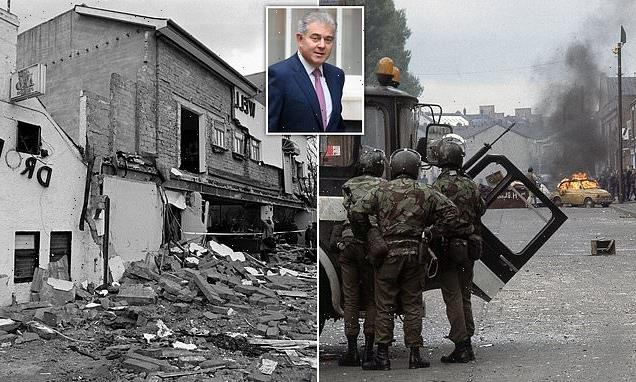 The Government is set to commission an official history of the Troubles to deter fears of revisionism aimed at changing the narrative of the conflict in Northern Ireland.

Northern Ireland Secretary Brandon Lewis has developed proposals that would see a ‘balanced’ team of historians, independent from ministers, draw up an official record of events from the 1960s to the Good Friday Agreement in 1998.

The record is expected to take years to complete and will cover the role of the Government and Armed Forces in the protracted conflict, including Bloody Sunday in 1972 which saw 13 civilians shot dead by troops.

It will also seek to prevent what ministers deem revisionist history from clouding or playing down the impact of IRA atrocities and terror attacks, according to sources cited by The Telegraph.

It comes after the Government announced earlier this year it would introduce a statute of limitations to end criminal prosecutions of crimes committed during the Troubles. 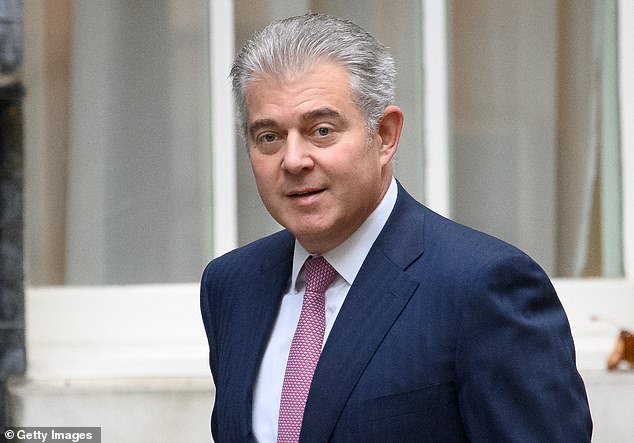 Northern Ireland Secretary Brandon Lewis has developed proposals that would see a ‘balanced’ team of historians, independent from ministers, draw up an official record of events from the 1960s to the Good Friday Agreement in 1998 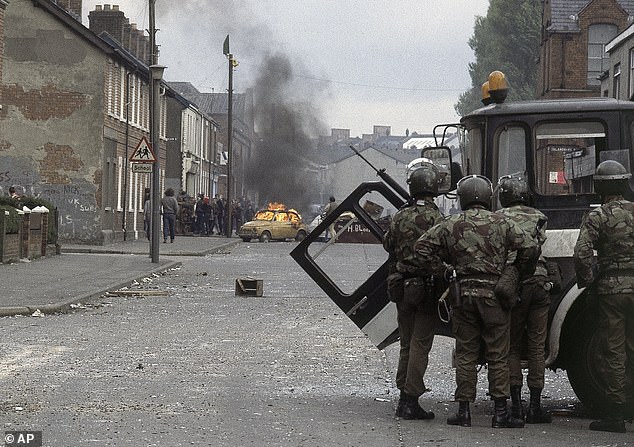 In this May 5, 1981 file photo British troops, in foreground, clash with demonstrators in a Catholic dominated area of Belfast, Northern Ireland 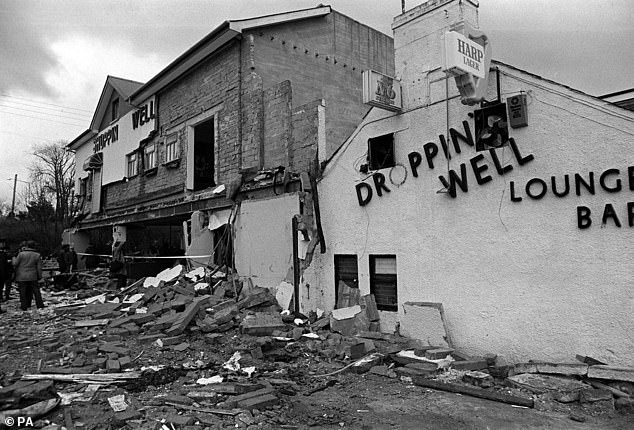 Photo dated December 7, 1982, showing the devastation caused by a time bomb exploded by the Irish National Liberation Army the evening before at the Droppin Well pub in Ballykelly

The plans being drawn up by Lewis signify another push to ‘draw a line under the Troubles’ – a statement made by Prime Minister Boris Johnson in July when the Government confirmed it aims to ban further prosecutions for crimes dating back to the conflict.

The compilation of historical records, footage, images, documents and other materials is expected to take several years and would be similar to the Government’s drive to document and chronicle the First World War in the years following the bloodshed.

The move is likely to be received positively by Unionist parties, who believe that Republicans have tried to play down the role of the IRA in the conflict, but is equally expected to incur a considerable backlash from the nationalist party Sinn Fein.

The Government’s intention to introduce a statute of limitations concerning the Troubles has drawn criticism from all sides, despite Lewis and Boris Johnson insisting the amnesty would allow those involved in the conflict on all sides to escape investigation.

The effective amnesty will apply to British veterans, former members of the security services and Royal Ulster Constabulary, as well as the IRA and loyalist paramilitaries.

Lewis believes shifting the focus from legal battles over events decades past towards a process of information collection and recognition would better allow families and communities affected by the conflict to move on.

‘We know that the prospect of the end of criminal prosecutions will be difficult for some to accept, and this is not a position that we take lightly,’ said Lewis in July.

‘But we have arrived at the view that this would be the best way to facilitate an effective information retrieval and provision process, and the best way to help Northern Ireland move further along the road to reconciliation.

‘It is a painful recognition of the reality of where we are.’

Meanwhile, a group of historians are expected to be appointed by the Government on privy council terms to undertake the project of information collection and collation.

The panel was created to develop plans to mark 100 years since the creation of Northern Ireland ‘in a spirit of mutual respect, inclusiveness and reconciliation’.

Northern Ireland celebrated its 100-year anniversary on 3rd May 2021.

Johnny Mercer calls for justice over the IRA murders of three British soldiers, as it is claimed a prime suspect has yet to be interviewed by police

Former Veterans Minister Johnny Mercer is calling for a prime suspect in the IRA murders of three British soldiers to face justice – more than 18 months after he was discovered by The Mail on Sunday. 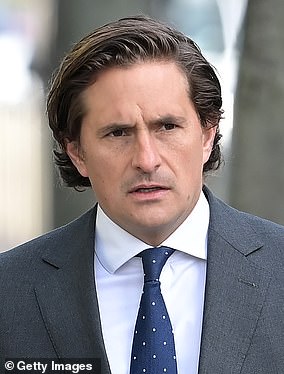 Police have now concluded a fresh review into the murders of soldiers John and Joseph McCaig, aged 17 and 18, and their friend Dougald McCaughey, 23, in March 1971, which was launched after the Mail on Sunday’s revelations.

But it is understood that suspect Anthony ‘Dutch’ Doherty, a former IRA man who was arrested over the killings in 1971 but later escaped jail and was never prosecuted, has not been interviewed by officers as part of the inquiry.

The families of the three victims, all off-duty members of the Royal Highland Fusiliers, and Tory MP Mr Mercer, a former Army officer, are now urging the authorities to act.

‘It has been over 18 months since The Mail on Sunday tracked down one of the key suspects in these horrific murders, and still no action has been taken by the authorities’, said Kris McGurk, on behalf of the soldiers’ families.

‘We will continue to fight for justice and are simply asking those with the proper power to help us achieve this.’