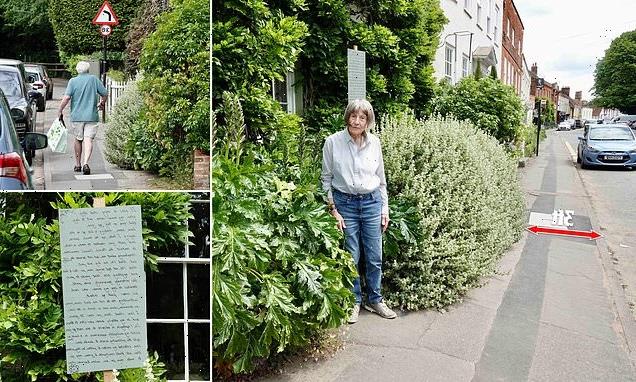 Grandmother, 84, defies council’s ‘health and safety’ order to cut back shrubs in her front garden because they partially blocked pavement

A widowed grandmother is defying an order to cut back shrubs in her front garden after her local council ruled they were a ‘a health and safety’ hazard because they obstruct the pavement.

Becky Curtis, 84, regularly gets admiring comments from neighbours and passersby who are impressed by the plants outside her Grade II listed 18th century home in the Constable Country village of Dedham, Essex.

But plentiful rain in recent weeks has led to the foliage spilling over her 30 inch high wall and on to the pavement more than it has in previous years.

Green-fingered Mrs Curtis insists there is still a three foot gap clear of any obstruction, enabling people to walk past without any problem. 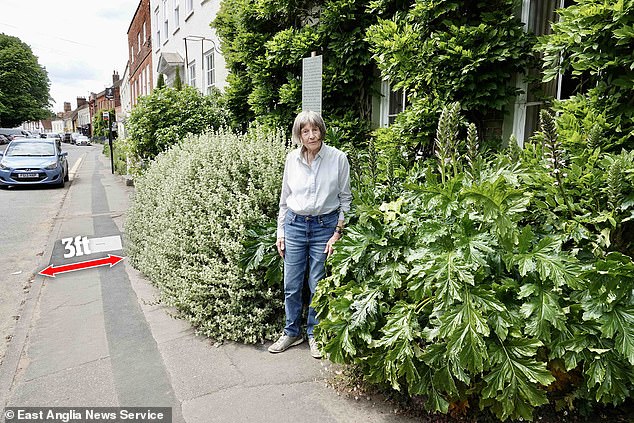 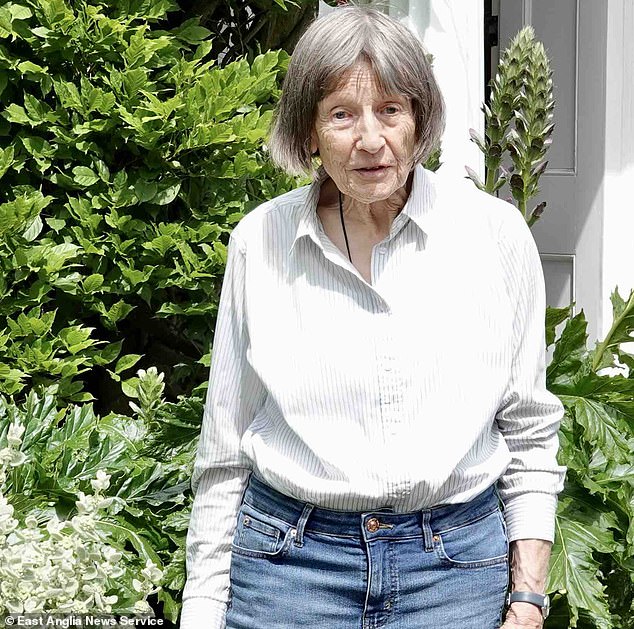 Becky Curtis, 84 (pictured), says there is still a three-foot gap for pedestrians to pass on the pavement unimpeded – and the shrubs are only slightly further out than in previous years

But Dedham parish council has ruled that her balotta, acanthus and choiysa plants are a potential danger and need to be urgently cut back to clear the footpath in front of her south-facing garden.

Mrs Curtis was shocked to receive a letter from the council clerk telling her that ‘various complaints’ had been received about vegetation ‘encroaching on to the pavement’.

The letter stated: ‘Please can you cut back the overhanging vegetation so as not to obstruct the pavement for pedestrians. Thank you for your co-operation with this.’

Mrs Curtis, who had horticultural training in the 1950s, is resisting the demand with the support of many villagers.

She fears any large scale pruning will deprive local bees of their annual feast on the pink flowers of her two giant balotta plants when they bloom later in the summer.

Mrs Curtis said: ‘I always cut back the balotta as hard as I can without killing it every Autumn, and I don’t see why I should do it before it has even flowered. We must do what we can to help the bees. 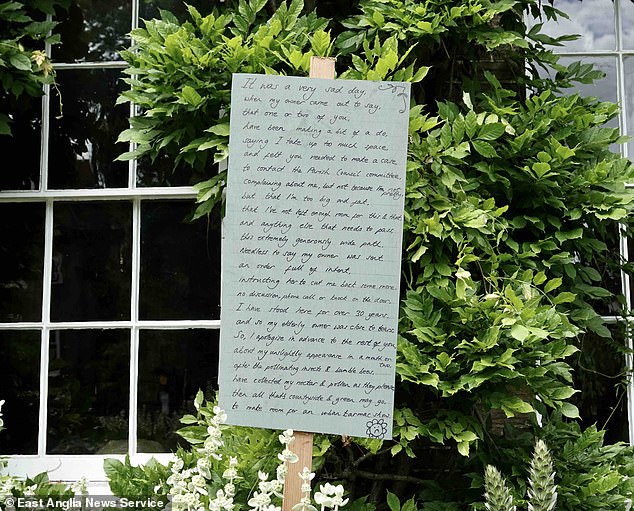 Mrs Curtis’ daughter-in-law has written a poem in support of the plants, which is on a sign outside her mother-in-law’s house

‘I was quite taken aback to receive the letter saying the council had received complaints. They didn’t say how many complaints. I guess it might only have been one person.

‘I spoke to a lady from the council, and she told me that I had to comply as it was a health and safety issue.

‘I was told that if somebody had two children and a push chair and a dog they might find it difficult to pass.

‘But the more I thought about it, the less I wanted to do it because it will just look horrible if I cut it back now, so I am going to leave it for the moment.

‘Everyone I have spoken to is absolutely supportive and believes that the council is talking rubbish.

‘People are not sure if the parish council actually has the power to force me to do anything.

‘The lady from the council told me that there needed to be room for people with prams and dogs to walk past, but there is still plenty of space on the pavement.

‘I am a bit stuck because the council will be furious if I do nothing, and if I cut it back then people will say, “Why did you do that?”‘

Mrs Curtis, a widowed mother-of-two with five grandchildren, was born in her historic family home in the village High Street before moving out and then returning around 50 years ago after she had been married for five years.

She planted her array of shrubs in her front garden 30 years ago alongside plants which have grown at the house for more than 100 years.

She is a long standing member of the Dedham Horticultural Society, and said people often stop by her house and ask about her garden.

‘The plants have always grown over my wall, but they are just six or seven inches further out on to the pavement this year because they have grown bigger and bigger with all of the rain we have had.’ 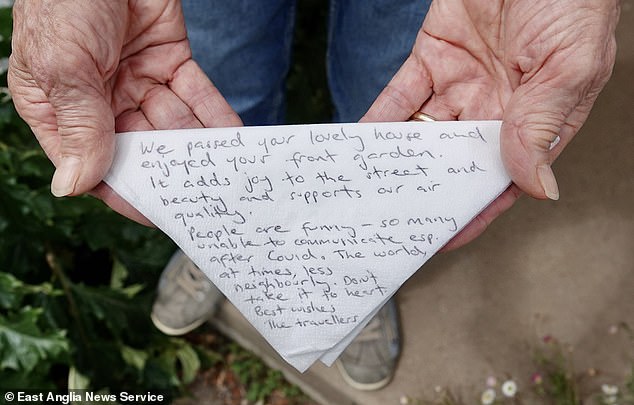 Mrs Curtis received an anonymous note from a visitor in support of her plants, which said: ‘The world [is] at times, less neighbourly. Don’t take it to heart’

Mrs Curtis’ daughter-in-law has written a poem on a sign in support of her plants, and placed it in her garden so it can be read by tourists who are attracted to Dedham and its surrounding countryside which featured in works by artist John Constable.

A visitor to the village even posted a napkin through her door with a handwritten message on it, saying: ‘We passed your lovely house and enjoyed your front garden. It adds joy to the street and beauty, and supports our air quality.’

It went on to say: ‘The world [after Covid is] at times less neighbourly. Don’t take it to heart.’

Mrs Curtis’ neighbour Lucy Casey, 45, said: ‘The plants are beautiful and do not cause any trouble at all.

‘Everyone I have spoken to thinks the council is crazy. It is ridiculous that they are being so officious.

‘Several people complained about the lack of parking for residents who do not have driveways. The council did not seem at all interested in that, but they are happy to make a fuss about some harmless plants.’

Mary Jones, 63, from Purley, Surrey, who was visiting for the day, said: ‘It is a stunning display. The balotta looks lovely and it would be a shame to destroy it now by cutting it back.

‘There is a loads of space on the pavement. You could easily get past in a wheelchair or on a mobility scooter.’

Dedham parish council clerk Carol Harbach insisted that the council was entitled to take action over pavement blockages in some cases, but was unable to comment on what enforcement action could be taken.

The council said in a statement: ‘We have received a number of complaints by other residents and we don’t ask people unless it is a health and safety matter.

‘We are obliged as a council to undertake these requests to cut back vegetation when it is overgrown.

‘It is something which is obstructing the footpath and we have an obligation to deal with hedges and keep the footpath safe.’