“Something good came from evil, which is loyalty,” Guaido told ABC News.

Guaido, 35, also defended his opposition party’s efforts and cautioned critics to be patient.

“We would obviously like for Venezuela to have changed already,” Guaido said in an interview. “We would like for the usurpation to have ceased, of course. Not just me but all Venezuelans. This is pending, but it’s under construction.”

The ABC News interview came on Thursday amidst one of the most tense and uncertain moments in a landmark week marked by frustration, uncertainty and feverish geopolitical intrigue. New street protests called for by Guaido were expected to fill the streets in top cities like Caracas and Maracaibo this weekend.

Earlier this week, the nation’s spy chief reportedly defected — or at least has disappeared — and a popular opposition leader freshly-sprung from years of house arrest and banking on an imminent overthrown of Maduro was forced to pivot suddenly after emerging triumphant from detention — and seek immediate refuge at a Spanish diplomatic residence in Caracas. Meanwhile, wary U.S. officials continued to privately debate a host of unpalatable options to finally force the 56-year-old strongman from office.

For his part, Maduro remained defiant on Saturday, warning in a speech to his nation’s armed forces at a military base in northwest Venezuela to be “ready” for the possibility of a U.S. military intervention, according to Agence France Press.

He urged the military “to be ready to defend the homeland with weapons in your hands if one day the US empire dares to touch this territory, this sacred earth.” 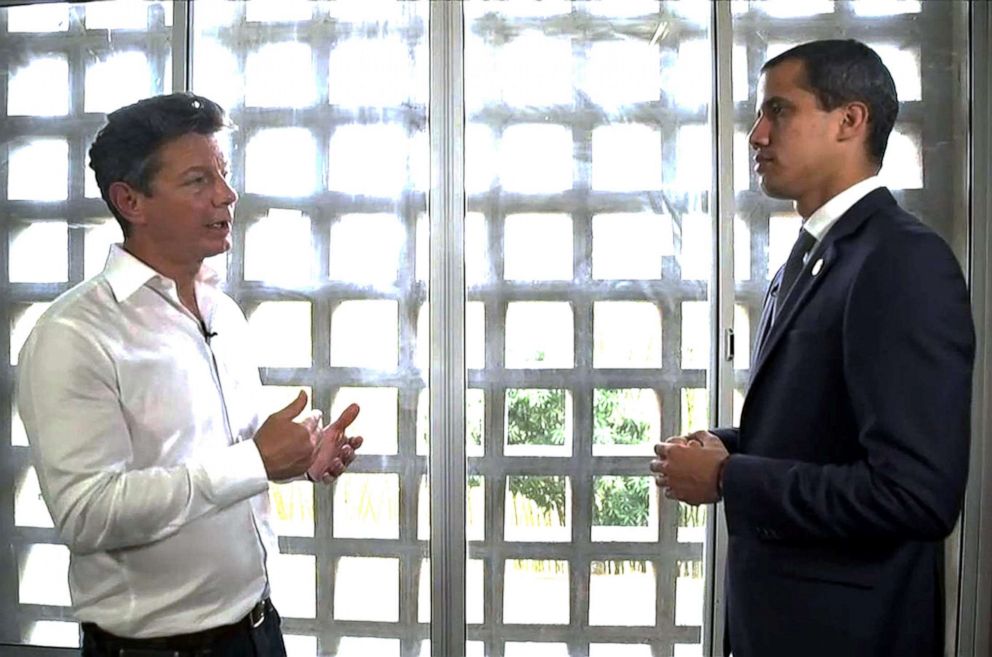 “As citizens, our weapon — the tool we have to express ourselves — is peaceful protest, civil, non-violent, like we’ve been doing all these years,” the opposition leader said. “We’ve built a majority. We have manifested our discontent. We have achieved getting hold of parliament. We have succeeded in getting support from the armed forces.”

“So it’s our weapon, we have used it, and we will continue to use it until we get our freedom.” 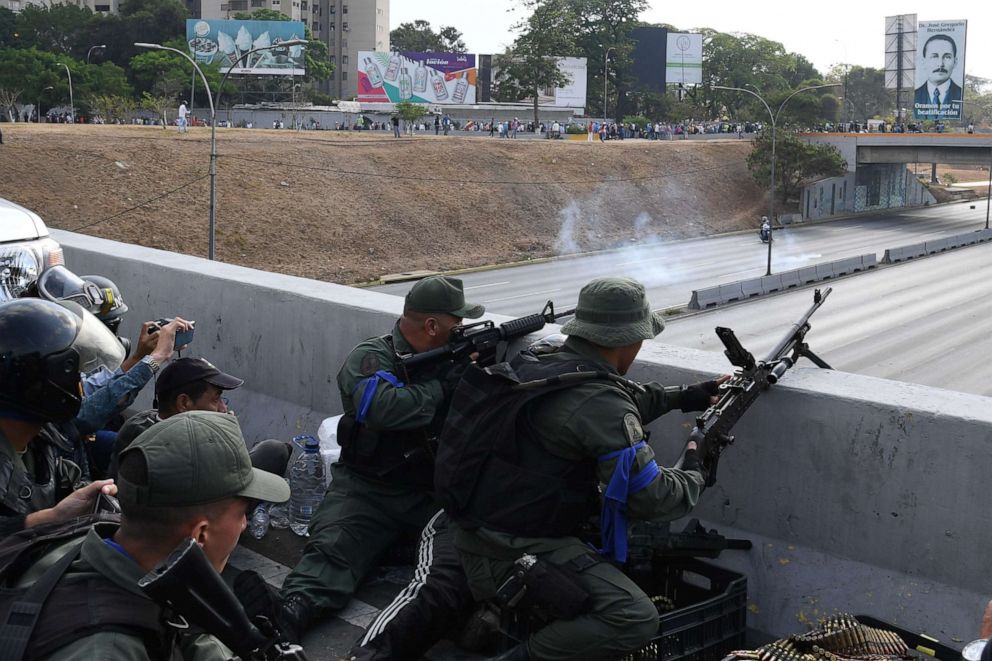 Guaido also continued in the interview to urge Maduro loyalists — particularly those in the military — to defect and force Maduro out.

“Those who are on the side of the constitution, on the side of the Venezuelan people…we would be willing to talk to all of them,” Guaido said. “We expect that…they’re still in a phase of rumors and doubt among themselves while we are very clear in our objective, our way, our direction, and we would like for there to be many more of them to guarantee a democratic and peaceful transition in Venezuela.”

Guaido told ABC News he is not opposed to outside military intervention – an option frustrated U.S. officials continue to insist remains on the table — because social conditions within the country are deteriorating by the day.

“All the options are on the table because we must evaluate all of them responsibly — since we’re already paying a social toll, when there already are kids dying of hunger, when there’s … 25% of the population — seven million Venezuelans — at risk of death, when there are four million [Venezuelans] who have fled, the largest migration in our region and the second biggest after Syria.”

“So at this moment if you evaluate for example, the economic indicators in Venezuela when it comes to GDP contraction: 60% in six years,” he said, referring to the nation’s gross domestic product. Economists define a country’s GDP as being in contraction if it declines in two or more consecutive quarters of a given financial year.

“This is the sixth consecutive year that our economy is in free fall,” Guaido said. “And inflation at 2.3 million%, hyperinflation — and it’s projected to reach 10 million! There’s no access to basic services, no electricity in several states in the country. You can only compare this to war-torn countries. And the only intervention that exists today in Venezuela is from Cuba who come here to do military intelligence and counterintelligence against Venezuelan soldiers, which makes them scared by the way and Russian military planes coming into Venezuela.” 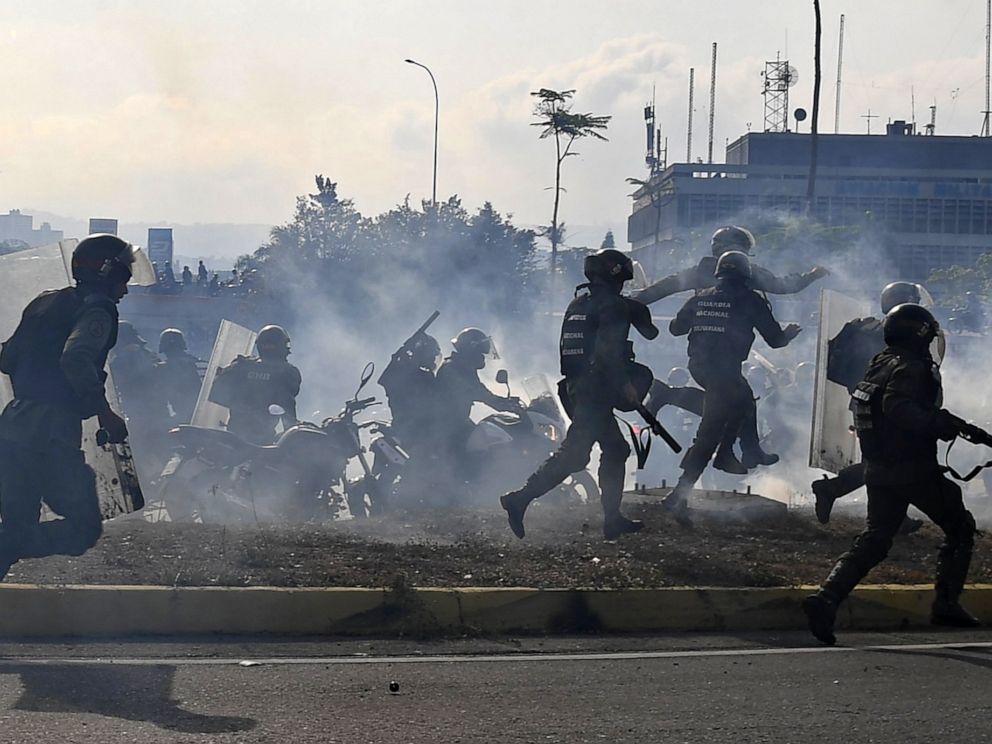 Earlier this week, U.S. Secretary of State Mike Pompeo charged that Russia had blocked U.S. efforts to get Maduro out of the country, persuading him at the last-minute not to take a waiting plane to Cuba.

The opposition-controlled National Assembly declared Guaido interim president in January, but months of demonstrations and U.S. sanctions have not forced Maduro from his grip on power — even after a major uprising Tuesday.

That’s in large part because of Russian support, according to U.S officials. Russia sent at least 100 troops to rendezvous with Maduro’s security forces in March, and Russian officials have shielded him from sanctions or penalties at the United Nations Security Council, transferred his government’s assets to protect them from U.S. economic pressure and reportedly even convinced Maduro to stay in power this week — after Guaido and the U.S. prematurely claimed that he’d won the allegiance of some top Maduro aides and a key portion of the military.

Experts say that Venezuela is has been intertwined with Russia for decades — through oil, arms and geopolitical imperatives.

Russia owns a significant portion of Venezuela’s oil fields in Venezuela through a state-backed oil firm, Rosneft, has sold billions in military equipment to the South American nation and loaned Maduro’s regime billions more – much of it still outstanding.

Guaido said that regime change is vital to turning the long-troubled South American nation around. 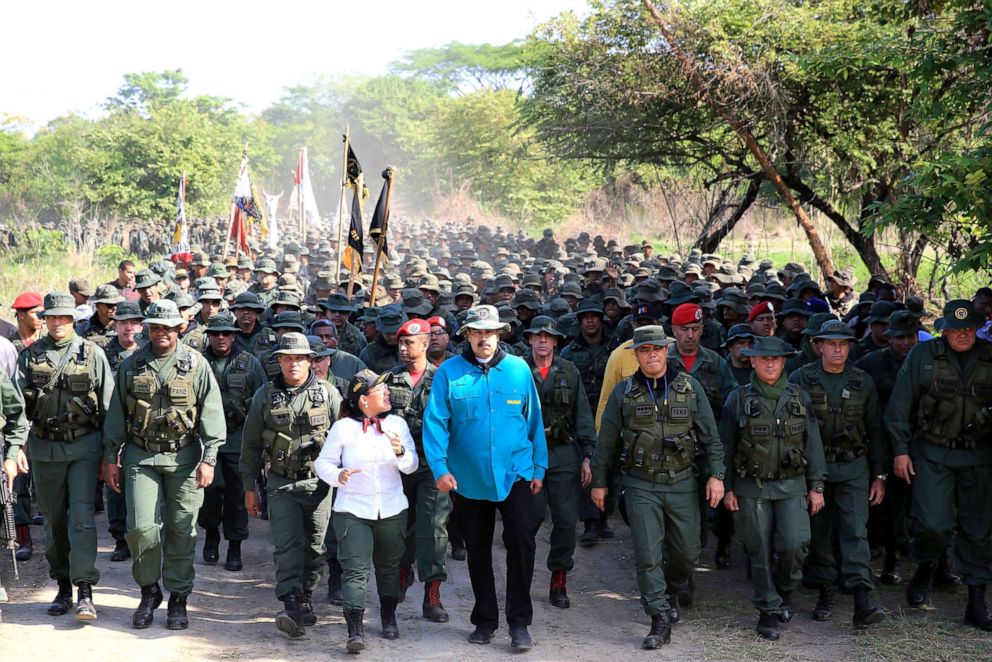 A plot for some of Maduro’s top aides to defect this week to the side of the opposition party appears to have come apart in the 11th hour, according to multiple new reports — possibly in part due to distrust between the aides and U.S. officials, among other things.

Weeks of secret talks between the top aides and opposition leaders — including long-detained but recently-freed Leopoldo Lopez — culminated in a roughly 15-point document which guaranteed Maduro loyalists like military general Ivan Hernandez, defense minister Vladamir Padrino Lopez and Supreme Court chief Justice Maikel Moreno not just a place in the planned, post-Maduro interim government, but a promise that they won’t be prosecuted, the Associated Press reported on Saturday.

All three officials have to date remained publicly loyal to Maduro. A fourth top aide, who heads Venezuela’s intelligence agency, General Manuel Figuera, did break rank and has since disappeared, according to the AP. 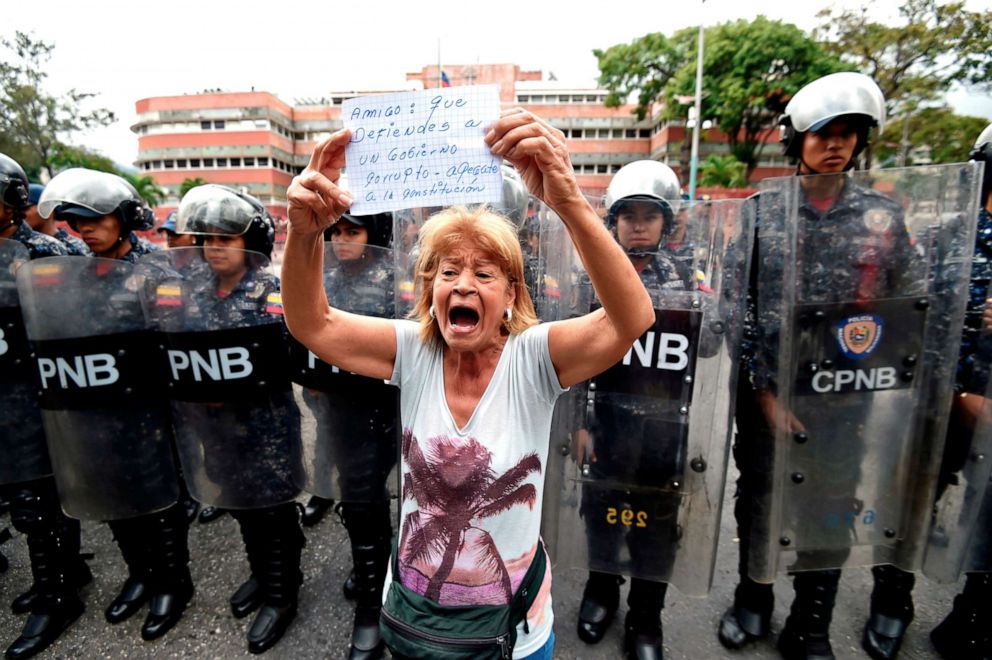 Lopez, a Guaido mentor who had been detained since 2014 and under house arrest since 2017 for organizing marches against Maduro – only to be freed this week — told the Associated Press that he had been secretly speaking with top Maduro loyalists about defecting to the opposition’s side for weeks.

U.S. special envoy Elliott Abrams told the AP that a document had even been written up that codified the promises and guaranteed “a dignified exit for Maduro.”

“I am told the document is long – 15 points, I think – and it talks of guarantees for the military, for a dignified exit for Maduro, and Guaido as interim president,” Abrams told the wire service.

One former U.S. official who spoke to the AP on background suggested that distrust between Trump administration officials and Maduro’s inner circle has contributed to top Maduro aides’ reluctance to make the leap and abandon the embattled Venezuelan dictator. 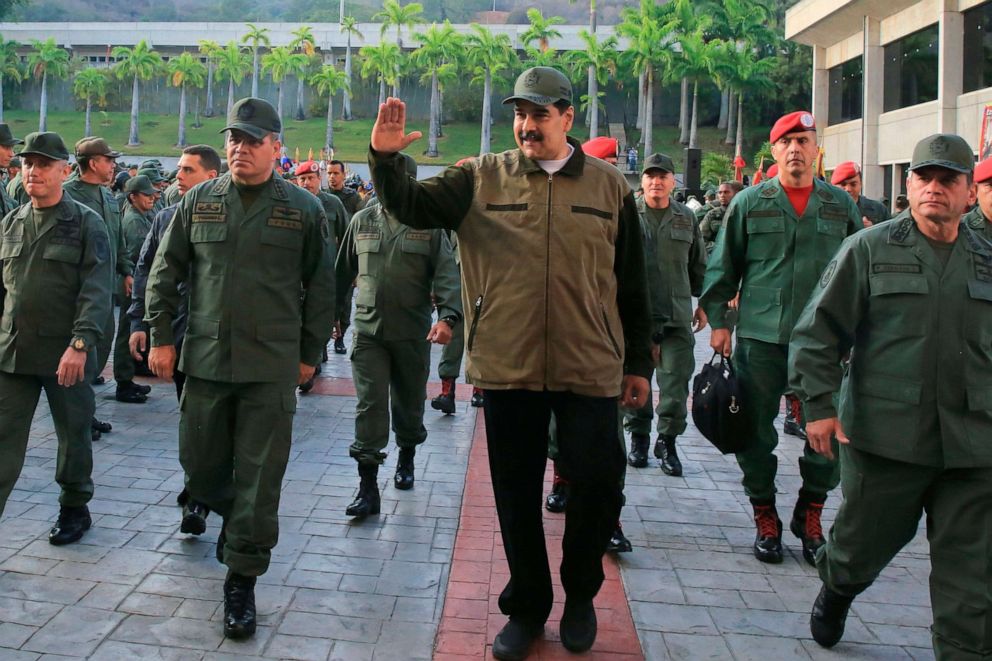 The unidentified official, and a second source, described U.S. administration officials’ decision in 2017 to reject a request from Hernandez, the military general, for a U.S. visa for himself and his wife to accompany their son to Boston for a vital brain surgery for the boy, and a lengthy convalescence of months. Hernandez’s efforts to secure a visa were ultimately rejected by U.S. officials, according to the AP sources – as was a similar effort by another top official to open a back channel to U.S. officials in 2015.

But a different, unidentified former U.S. official challenged that view to the AP.

“If any senior [Venezuelan] official is going to join a plot, it’s because of a cool assessment of its chances of success,” the official said, “not because their son got medical treatment in the U.S. two years ago.”

Distrust reportedly colored both sides of the negotiations: many Venezuelan opposition leaders remain suspicious that back channel talks with top Maduro aides in recent weeks were simply a military counterintelligence effort aimed at gathering information while merely feigning an interest in defection. 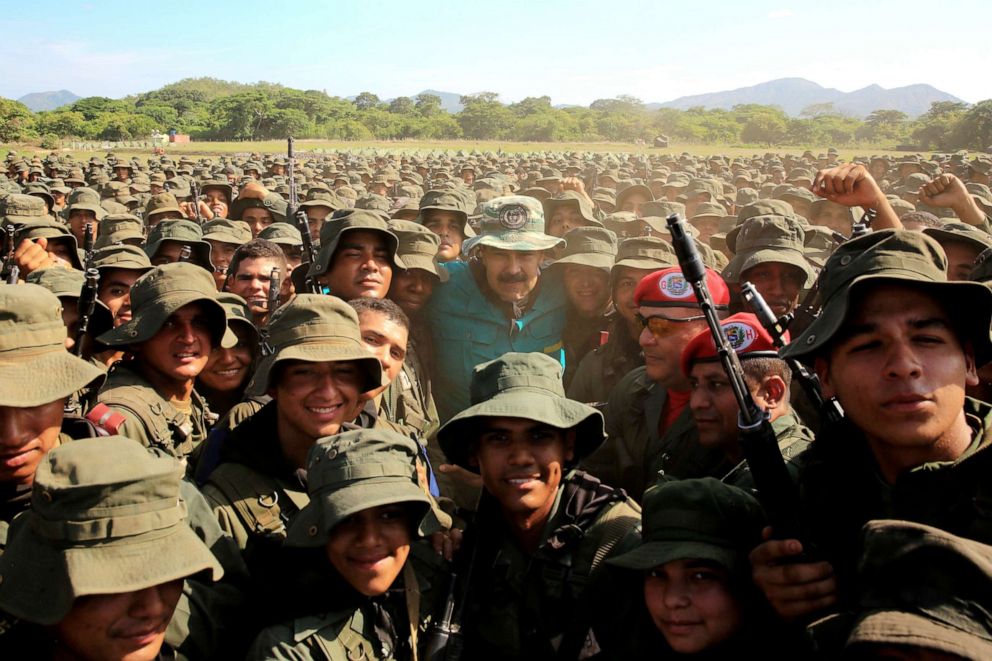 One opposition leader told The Washington Post this week that Maduro’s top aides had indicated commitments to defect, but apparently backed out at the last minute – though precisely why each of them did remains unclear.

“We moved forward out of trust that the top ranks [of Maduro’s government] would make announcements against Maduro,” Freddy Superlano, a leading opposition lawmaker, told the newspaper. “Maduro was going to respond by leaving.”

Rumors of Guaido’s imminent arrest pushed the plan forward by a day, and on Tuesday, Guaido appeared outside a military airbase in Caracas – just miles away from the presidential palace known as Milaflores – and called for mass military defections.

But hours later, according to the newspaper, opposition leaders “realized something had gone terribly wrong.”

For his part, Lopez, the defense minister, appeared on television beside Maduro and denounced the plot as a “coup.”

Recognizing that the plan had apparently fallen apart in the 11th hour, Lopez hustled to a Spanish diplomatic residence in Caracas to seek sanctuary, where he is likely to remain, given that on Thursday, a Venezuelan court issued a warrant for his arrest.