THE gun-toting St. Louis couple, who had a tense stand-off with Black Lives Matter protesters outside their home, have launched a donations website amid an expensive legal battle, The Sun can exclusively reveal.

Lawyers Mark and Patricia McCloskey each face one charge of "unlawful use of a weapon — flourishing," after the confrontation at their $1.7million Midwestern palazzo on June 28. 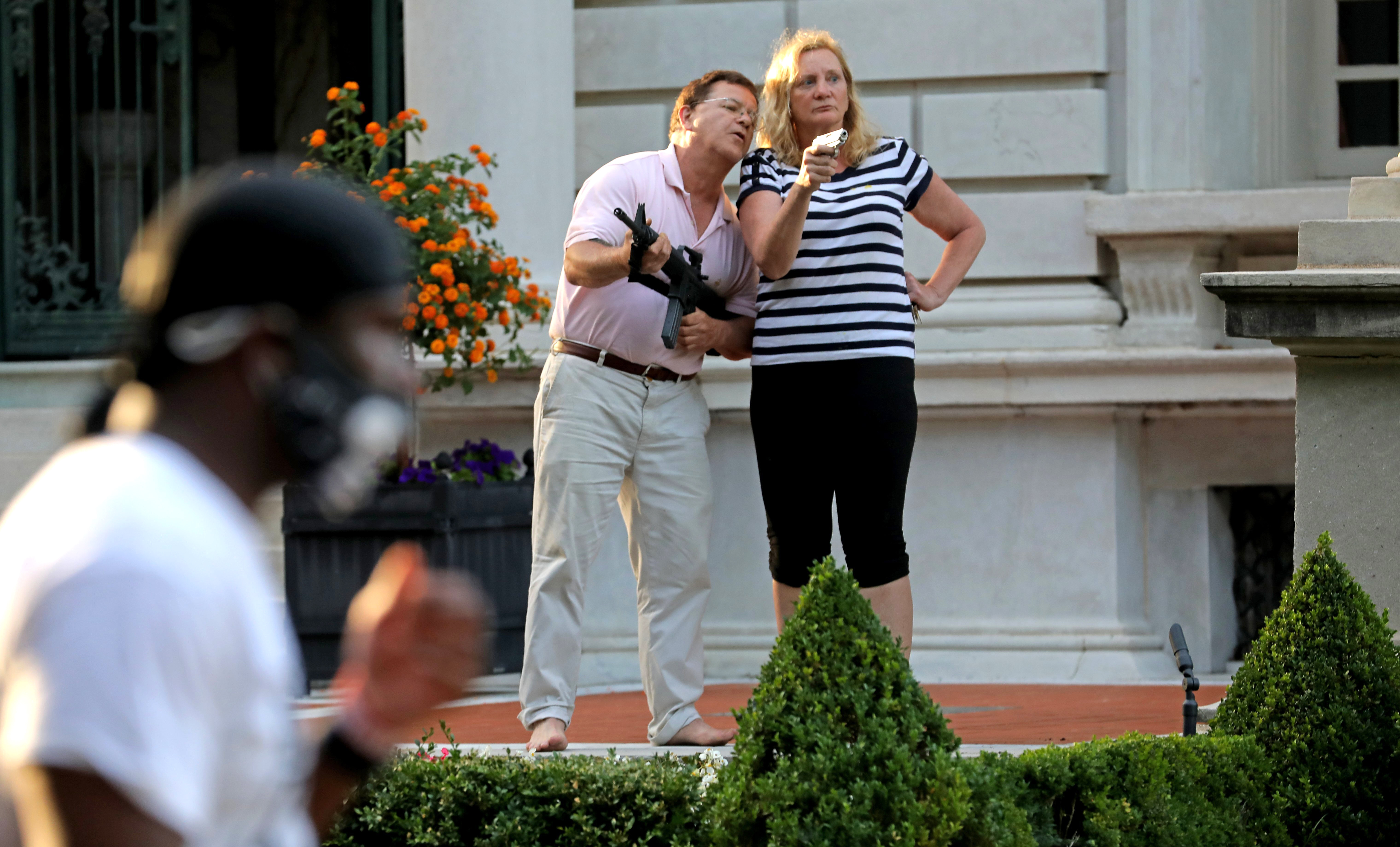 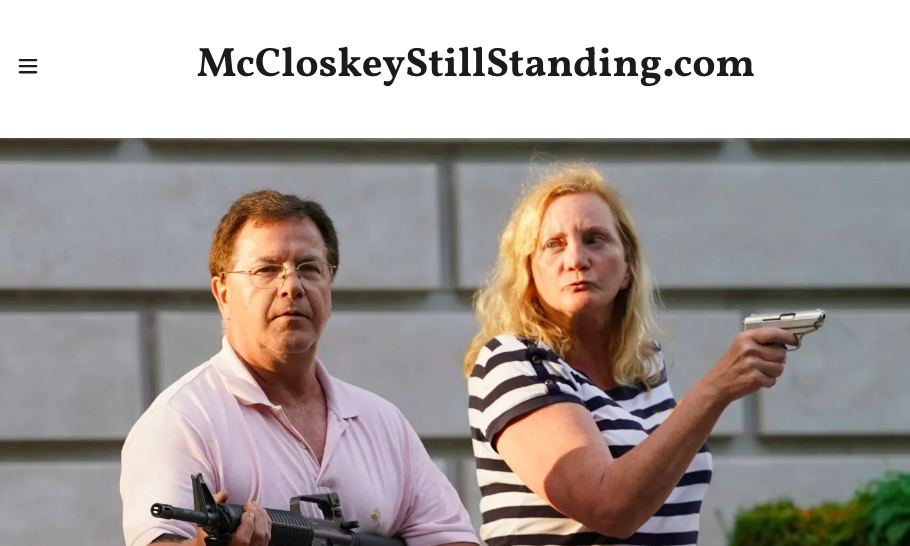 Photographs showed the pair brandishing guns as 100 protesters passed their lavish house, which Mr McCloskey described as being "like the storming of the Bastille" after demonstrators "smashed down wrought-iron gates" on the private street.

Protesters claimed they walked through an unlocked gate to get to Mayor Lyda Krewson's home for a rally – as they called for her resignation for releasing the names and addresses of residents who encouraged defunding the police.

Now, McCloskey and his wife, 61, are appealing for donations after being charged through their website – mccloskeystillstanding.com – and say "this is a fight we must win."

In a new interview, Mr McCloskey, 63, told The Sun: "The goal is not specifically to fund our defense, [although] it depends how vigorously we're attacked, hopefully we can manage that on our own.

"We wanted to create a place where people can provide funds to help others who aren't as able as we are to defend themselves against this kind of attack. 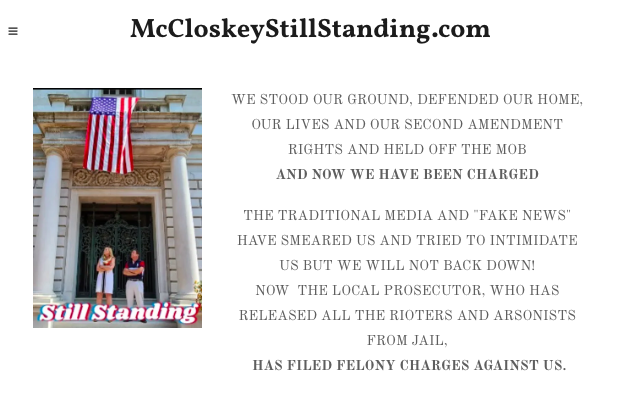 "We've had an outpouring of support. This morning I had another call from England, and we've gotten calls from France, Australia, Russia, virtually everywhere."

Their website has already experienced problems and The Sun understands it is best viewed in a Chrome browser, with Mark writing on Facebook: "We had a glitch on our donation page, but it has been fixed now."

Asked how the pair have been coping after the confrontation last month, he admitted: "It's been very stressful, we still have one gentleman that sends us hate mail every day from the same zip code but on postcards from all over the world.

"We've had letters saying, 'Rot in hell, I hope you die soon, I hope you get horrible diseases' and 'we're coming to get you,' those sorts of things. And we still get a number of difficult phone calls a day.

"There's one guy who actually draws caricatures of my wife and has insulted every part of her anatomy from the top of her head to the bottom of her feet, including the most violent and insulting descriptions of her female anatomy. 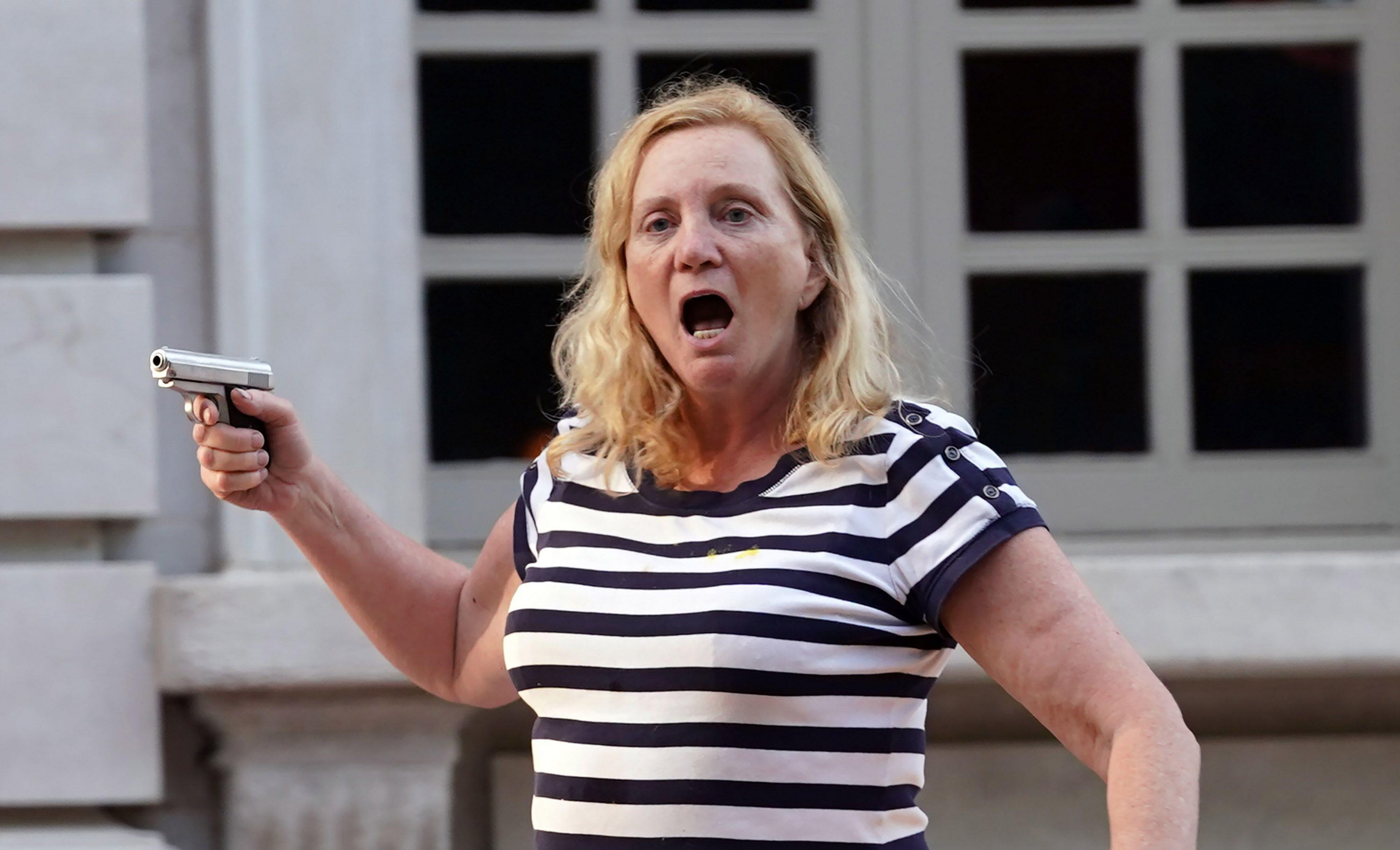 He added: "And in the hundreds of supportive letters we've gotten, no-one discusses race.

"The only racists we've encountered in this have been the haters who have sent us derogatory mail and made phone calls."

Sources claimed the protesters were not threatening the couple, with Daniel Shular, a freelance photojournalist who was at the protest, recalling seeing crowds simply walking through an open gate.

"I kind of turned around to take some pictures of people coming through the gate, then I turned back around and by then he [Mr McCloskey] had his long gun in his hand," he told NBC News.

"And the woman came out with a pistol and started pointing it with her finger on the trigger at everybody."

Prosecutor Kim Gardner, whose office brought charges against the couple, said in a statement: "We must protect the right to peacefully protest, and any attempt to chill it through intimidation or threat of deadly force will not be tolerated." 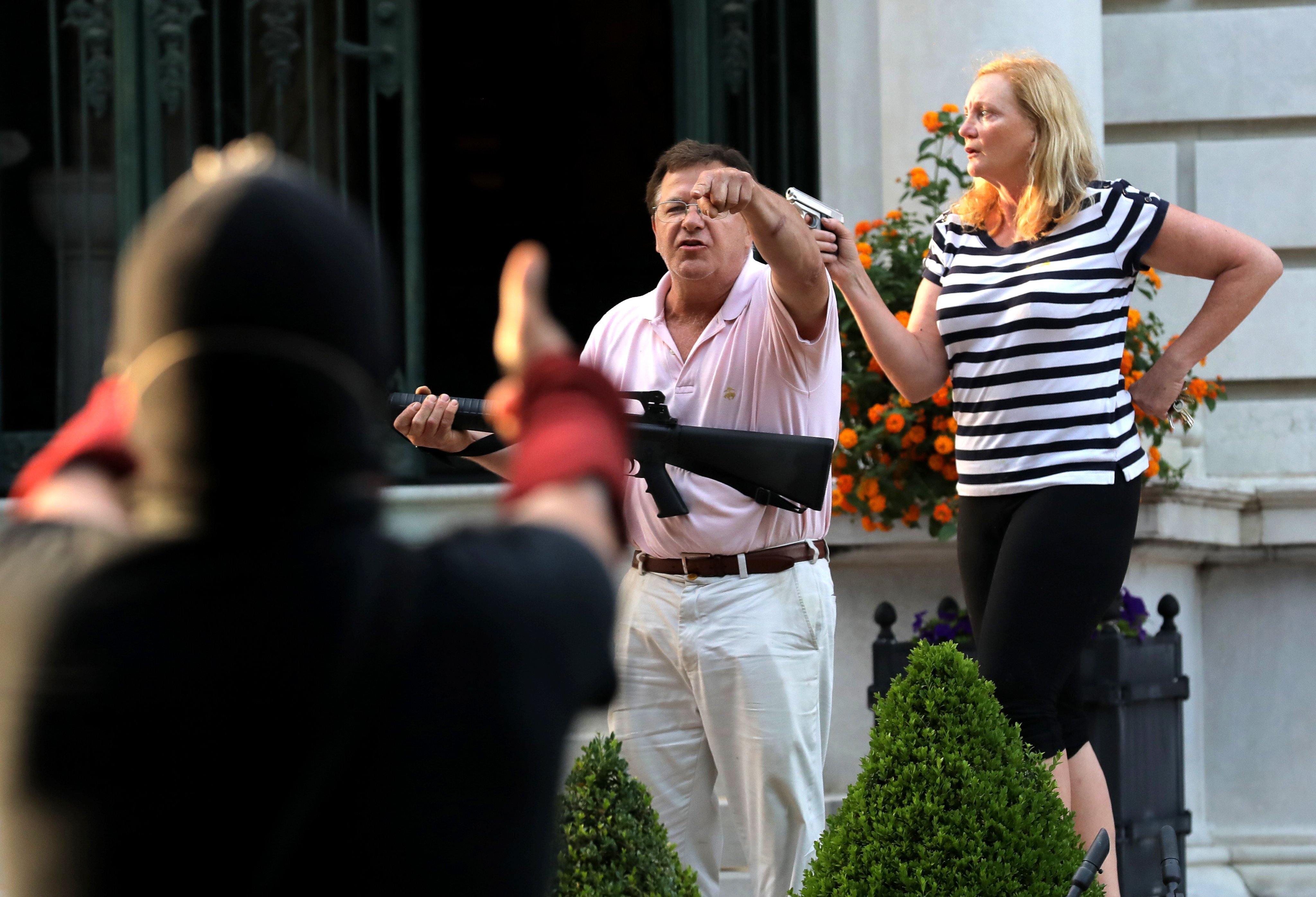 On July 3, hundreds of protesters returned to their mansion for a peaceful protest, but McCloskey says they again feared for their lives and initially struggled to get personal protection.

"We had a tip and were told they were coming to kill us and burn down the house, and we started contacting private security entities, including those which employ special forces troops," he said.

"No-one was interested in protecting us because they didn't want the bad press … it was Thursday, July 2 and we were really desperate, all alone in the world with no security lined up and very specific threats.

"The last security entity we talked to said, 'Our advice is just walk away from the house and abandon it, forget about it'. We said, 'We're not gonna do that'.

"It's been kind of a life's work for the both of us, it's part of us, we have restored it to what we'd like to think of as its original grandeur, if not a little better."

The McCloskeys contacted the media and appealed for help, after which a squad of well-trained security officers, former NAVY Seals, secondary employment local police officers, and even Chief of Police, John Hayden, Jr, turned up to assist the couple. 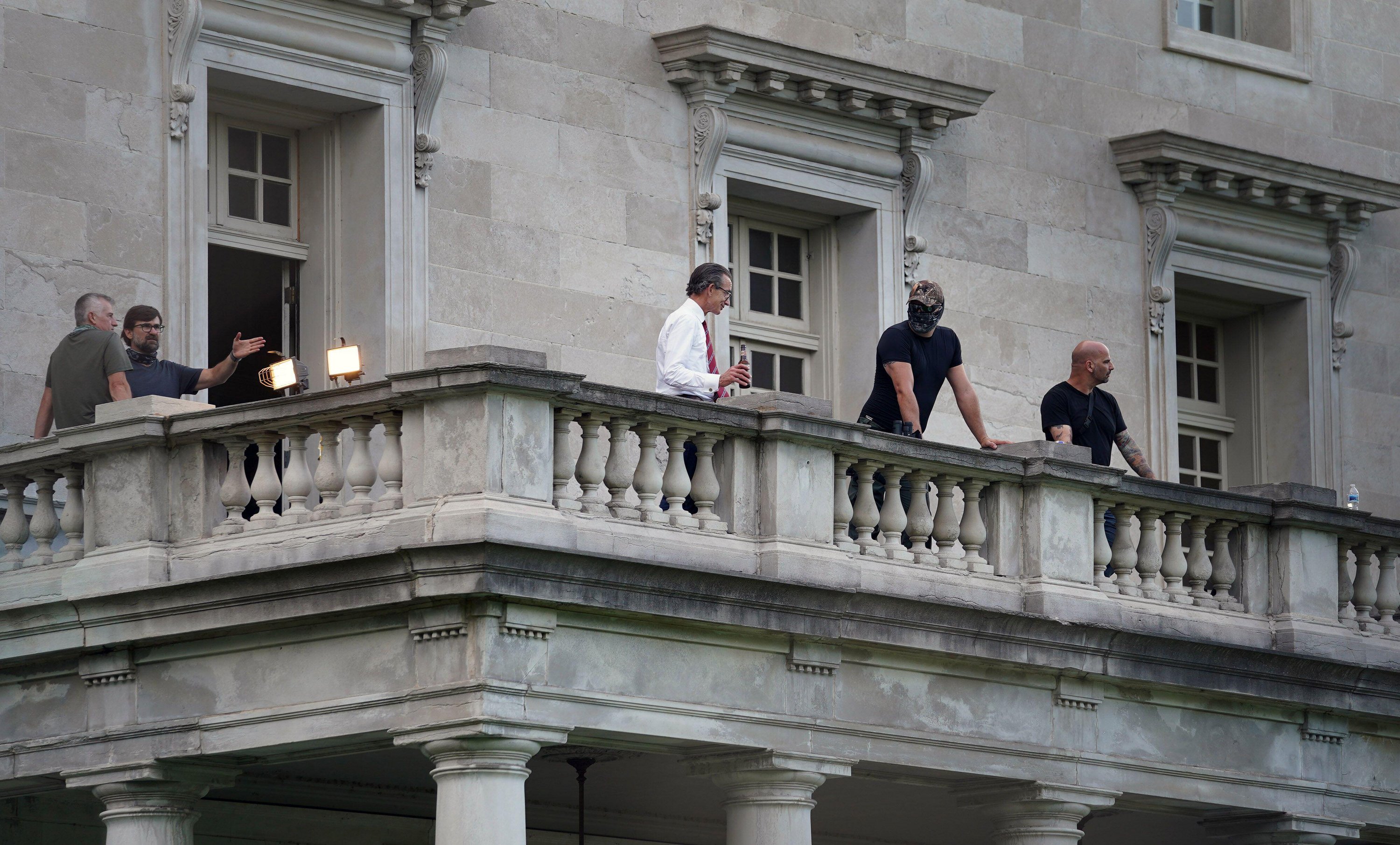 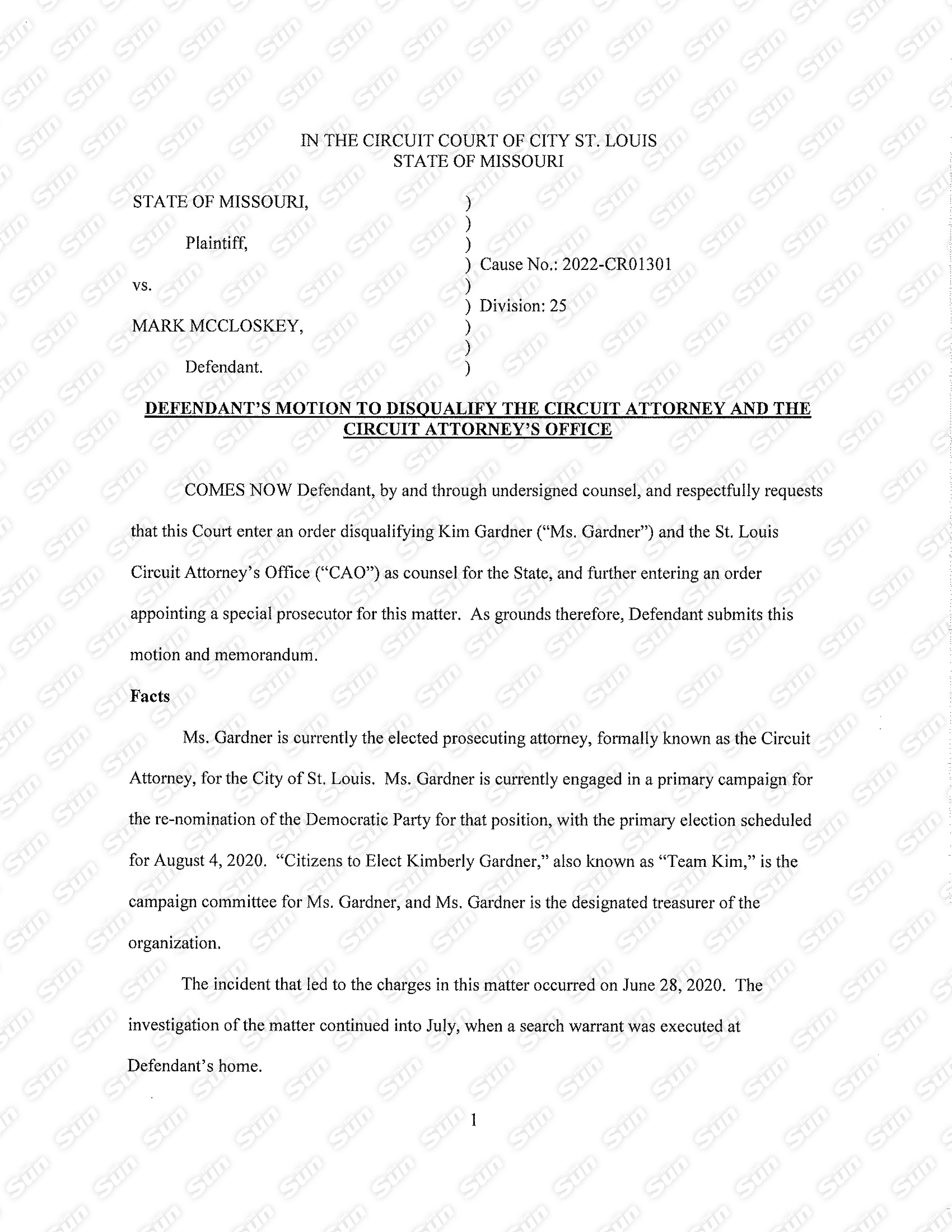 "It was an example of how it should really work," McCloskey said.

"The protestors got their chance to mass in front of the house, scream and shout and state their positions and then move on with no violence or destruction.

He says there have been no incidents since, but they "can't predict the future," adding: "Various things are being worked out by our counsel and we're just kind of taking a wait and see approach."

The couple hope their website will pull in thousands of dollars in donations to help their plight and anyone else who ends up in a similar situation amid the Black Lives Matter protests.

"We stood our ground, defended our home, our lives and our second amendment rights and held off the mob. And now we have been charged," the site's literature reads.

"This fight will be expensive and time-consuming and no matter how this turns out, the mob will return and significant amounts will need to be spent on security." 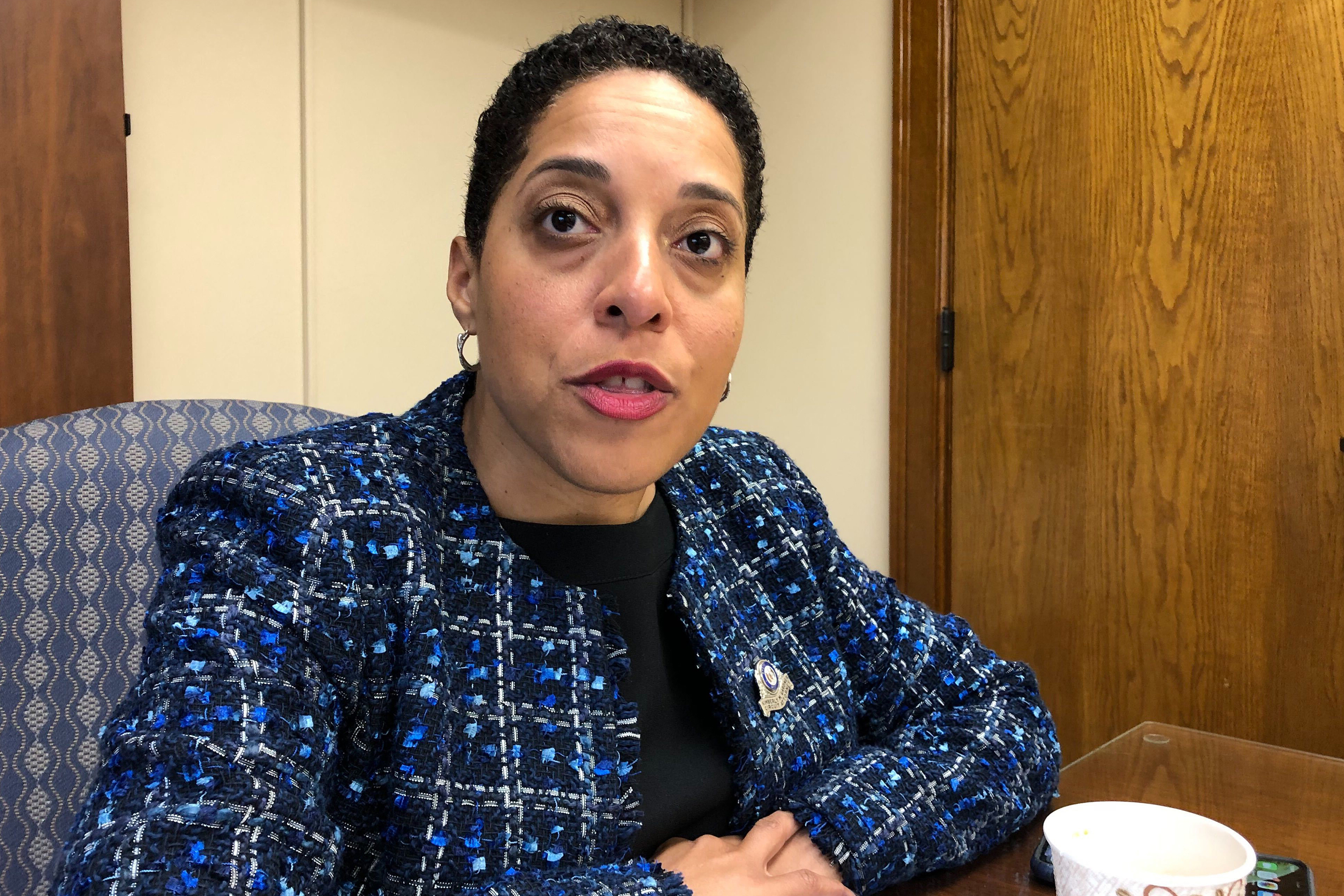 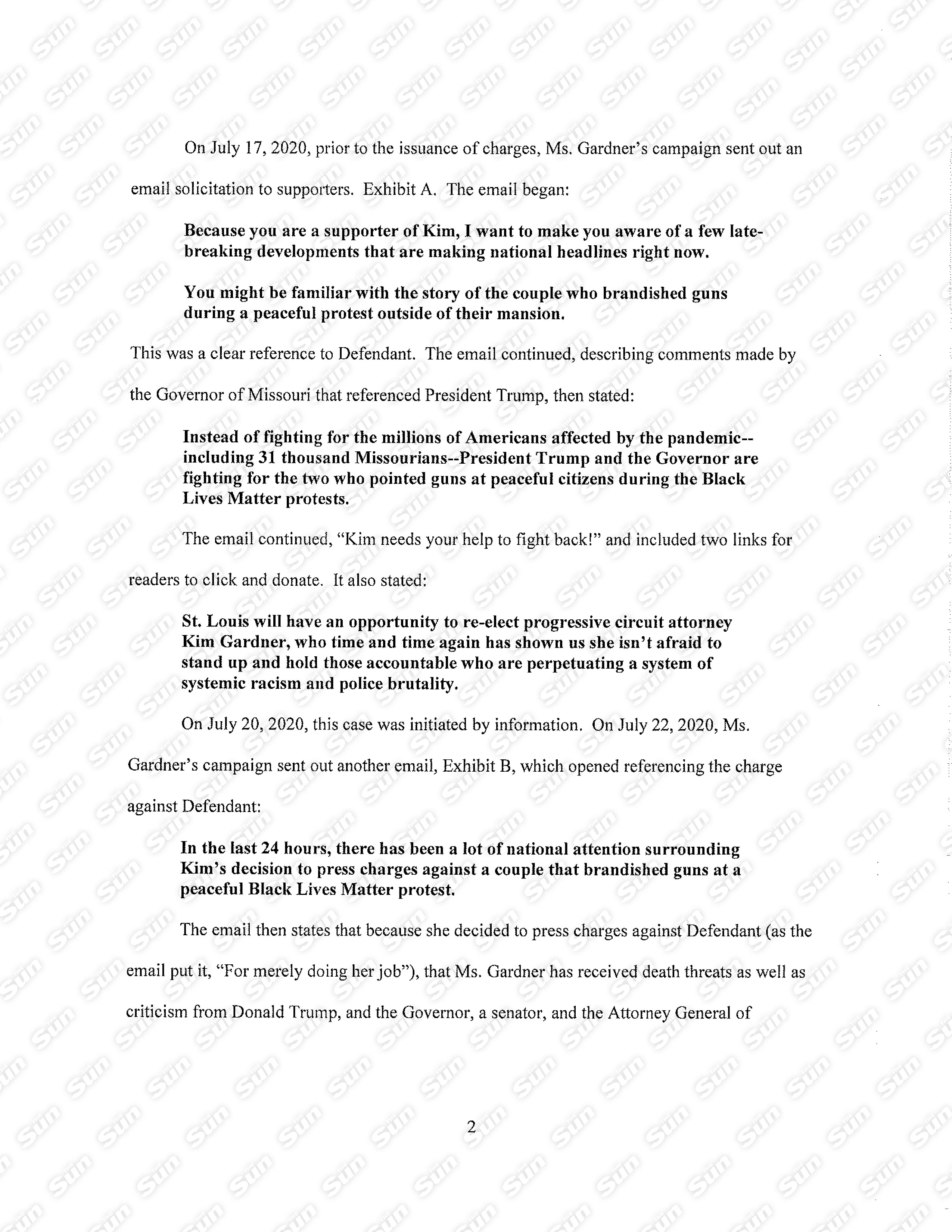 They added: "This is a fight we must win for all of us. We can't let the leftist politicians crush the rights of citizens to defend themselves."

Their lawyer, Joel Schwartz, filed a motion on Wednesday to disqualify the St. Louis Circuit Attorney, Kim Gardner, and her office from pursuing their case, claiming she has a personal interest in the outcome.

According to the filing, obtained by The Sun, an email was allegedly sent by Gardner's campaign team on July 17 before charges were brought -containing links to donate to her upcoming re-election.

The email read: "Because you are a supporter of Kim, I want to make you aware of a few late-breaking developments that are making national headlines right now.

"President Trump and the Governor are fighting for the two who pointed guns at peaceful citizens during the Black Lives Matter protests."

The email included the message: "Kim needs your help to fight back!" and listed two links for readers to click and donate to her campaign.

Schwartz says the law claims a prosecutor should be disqualified if they have a "personal interest in the outcome of the criminal prosecution which might preclude affording defendant the fair treatment to which defendant is entitled."