Gymshark has been mocked for a ‘virtue signalling’ post to mark Black History Month saying how they want to ‘amplify Black, British voices’.

The British sportswear giant posted on Instagram ‘Black stories matter’ and that the brand wanted to ‘celebrate and educate’ during October.

But it was savaged by social media users who questioned why the fitness firm felt it needed to weigh into the subject and not ‘just stick to gym clothes’.

‘We want to listen to and amplify Black, British voices. If you’ve got something you want to say (it doesn’t have to be about the gym), we want to hear it.’

It added: ‘Tell us your stories. Share your ideas. Tag your friends, family and inspirations. Whatever you’ve got to say, drop it below.’ 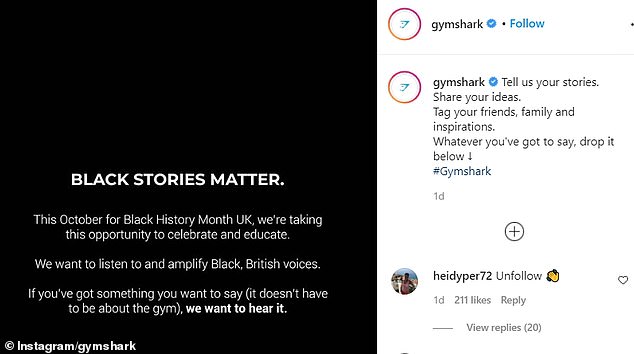 Ambassadors for the brand commented backing the move, with Australian Nathan McCallum, who has 784,000 followers, writing: ‘We are listening.’

But some social media users questioned why Gymshark decided to weigh into the conversation, with many saying they were unfollowing the account.

One person commented: ‘We aren’t here for politics show me some gains.’ Another posted: ‘Stop this sh**! All lives matters! Keep doing sport stuff!’

An account added: ‘stick to selling clothing.’ While one man said: ‘Can’t get rid of politics. Lol.’

A woman put: ‘Gymshark, I’d love to see how diverse and inclusive your leadership team is.’

He added: ‘Or white history month and amplify white voices?’ Another said: ‘Stop playing the f***ing race game. Your virtue signaling will not matter.’

And another commented: ‘Just stick to making clothes. You’re not even based in America.’

But some followers welcomed the post, with many commenting with the #BLM for Black Lives Matter.

One woman wrote: ‘It’s marking the importance of black history month so all of you getting triggered need to get a grip!

‘They are projecting an important message of education on black history. A month that only gets celebrated once a year and doesn’t get the exposure it deserves.’

She added: ‘No one is saying that other ethnicities do not matter. And people are vex? Nah.’ Another put: ‘BLM x GymShark coming soon.’

While one page commented: ‘Diversity and inclusion should be at the heart of every company. No one should feel like they don’t belong. Keep up the good work.’

Another account posted: ‘We support you, @gymshark. It’s so sad you’re getting criticism for doing what’s right!’

And one person added: ‘The growing diversity and inclusivity the @gymshark family has is amazing and I know the best is yet to come.’ 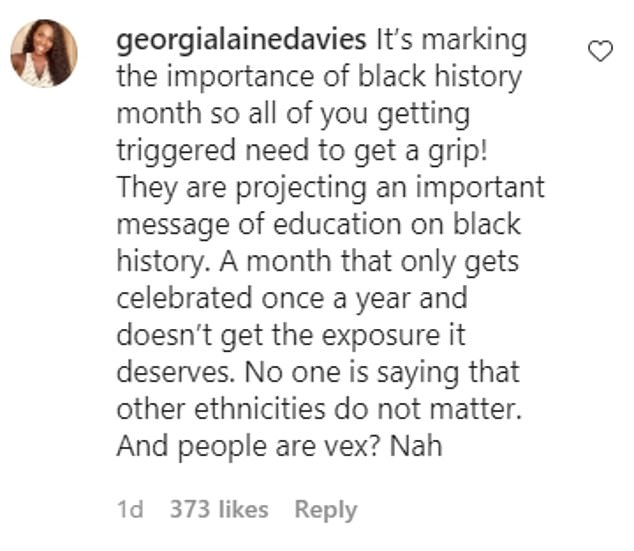 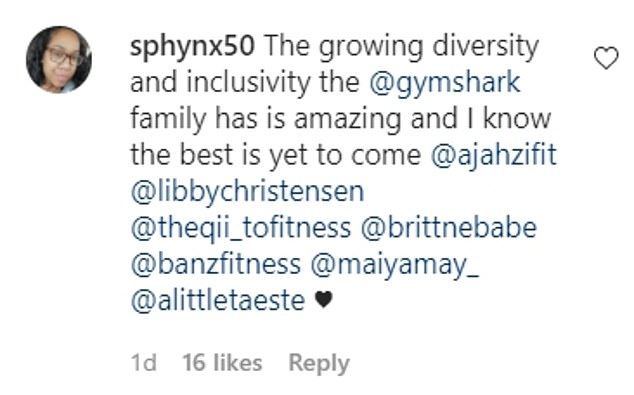 Gymshark’s post comes amid a renewed focus on the lives of black people, particularly in the US and Britain, following the death of George Floyd in May.

He was killed by a white police officer while in custody in Minneapolis, which led to widespread protesting and rioting across America.

In Britain landmarks have been targeted, with a monument to the UK’s greatest Prime Minister Sir Winston Churchill defaced, as well as statues to people linked to the slave trade torn down.

Some organisations have looked at how diverse they are and have driven to hire more people from ethnic minorities.

Today the new head of English cricket Ian Watmore criticised the ECB board for being ‘all white’ and said the 12-strong committee cannot lead the game effectively without more diversity.

Gymshark last month became a £1billion venture less than a decade after it was set up in a garage in Birmingham.

Ben Francis, 28, was a student in Aston University when he began working on his brand, developing clothing for the gym while also delivering pizza at night. 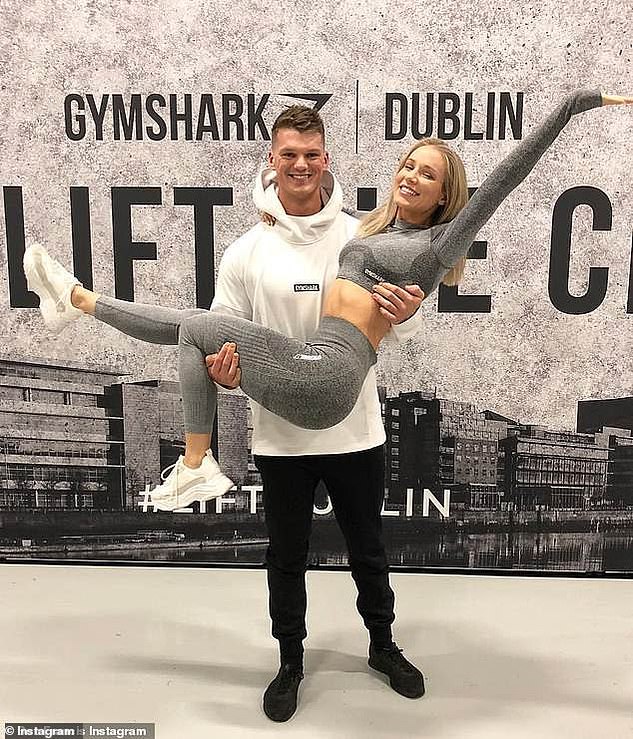 Ben Francis (pictured) started his Gymshark brand in his parents’ garage in Birmingham. After decade in business, the firm is now worth an estimated £1bn

Last year the company returned a profit of £18.6million for its fashionable gym wear and is one of the fastest growing brands in the country with a strong following among social influencers.

Last month Mr Francis closed a deal that valued the business at £1billion and make him Britain’s richest self-made person under 30.

He told MailOnline: ‘It has been an incredible ride over the last eight years to get to this point, but today signals the next chapter in the Gymshark story.

‘We are nothing without our community, so we will use this new investment partnership to get even closer to them on a truly global scale.

‘I’m incredibly proud of what Gymshark has achieved to date from our roots in Birmingham, but it’s all about looking forward.

‘I firmly believe Gymshark has the potential to be to the UK what Nike is to the US and Adidas is to Germany, and today is a significant step to realising that.’

He continued: ‘We have built a brand we can be proud of, from the products we manufacture through to the community we have grown, to the culture we have built both internally and externally.

‘For me, today’s investment just signifies the beginning, but we will be sure to retain the ingredients that have made Gymshark the brand it is today.

‘We look forward to working closely with General Atlantic to build our global footprint and ensure Gymshark becomes one of the global leaders in the fitness industry.’