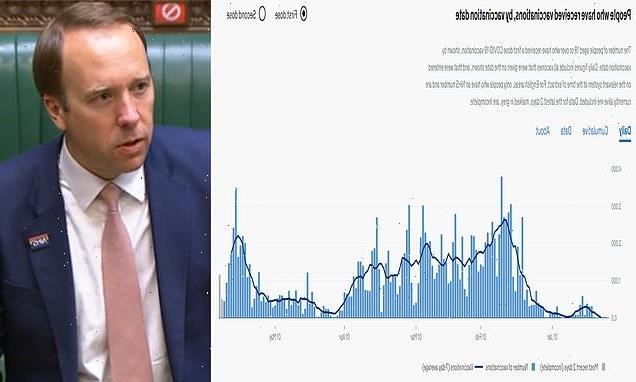 Does Matt Hancock ever tell the truth? Health Secretary claims in Parliament that ‘tens of thousands’ of people are now being vaccinated every day in Bolton… but official data shows the true figure is around 3,000

Matt Hancock today claimed ‘tens of thousands’ of Covid vaccines are being dished out each day in Bolton – but official data suggest the average is only around 3,000.

The Health Secretary was speaking in the House of Commons when he said: ‘The number of vaccinations happening in Bolton right now is phenomenal – tens of thousands every single day.’

The Greater Manchester town is one of the country’s Indian variant hotspots and the local NHS has tried to speed up the vaccination drive to thwart the mutant strain.

But Department of Health data show that the average number of vaccines given out each day in the area was just 3,169 by last Sunday, the most recent reliable figure – and it appeared to be falling.

The day on which the most jabs were given out in the borough was a week ago on May 20, when 5,447 doses were administered.

The Department of Health did not comment on the discrepancy before publication.

Mr Hancock’s claim comes less than 24 hours after former No10 aide Dominic Cummings accused him of lying throughout the pandemic during an explosive seven-hour meeting with MPs.

Hitting back in his Commons appearance today, the Health Secretary said allegations made about him were ‘not true’ and he insisted he had always ‘been straight’ with ministers and the public. 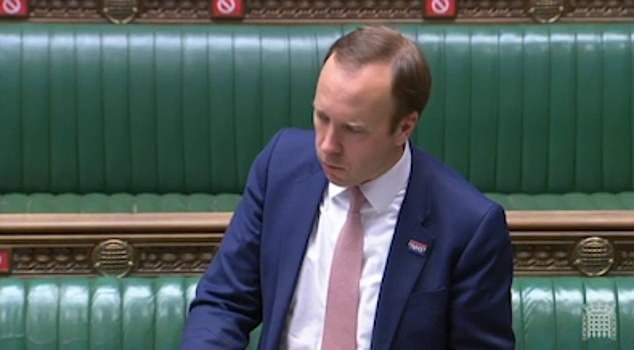 The Health Secretary was speaking in the House of Commons when he said: ‘The number of vaccinations happening in Bolton right now is phenomenal – tens of thousands every single day’

The number of people getting their first vaccine doses has never risen as high as 4,000 in Bolton, official data show, although the rollout has been sped up in May

The most second vaccine doses given out in a single day in Bolton was 4,965 on May 18

NHS chiefs in Bolton have nearly doubled the average vaccination rate this month, from around 2,000 doses per day on May 1 to a peak of 3,800 last week.

But according to the Department of Health data there has never been a day when the area has had 10,000 or more vaccine doses given out in a single day.

Bolton became the focus of the Government’s attention in May when it emerged Covid cases caused by the new faster-spreading Indian variant were surging there.

Variant experts at the Wellcome Sanger Institute estimate it accounts for 89 per cent of all cases there and there were at least 488 cases in the first two weeks of May.

Photos emerged of people queuing in the streets for vaccines after the borough had struggled with lower-than-average uptake before the scare.

Yasmin Qureshi, Labour MP for Bolton South East, called out Mr Hancock on Government actions towards Bolton after it emerged earlier in the week that ministers had changed travel advice for the area and not told anyone.

‘Last week my constituents were wrongly accused of vaccine hesitancy and then we had a quasi-lockdown that no-one knew about and many people’s travel plans were thrown in chaos,’ she said.

‘The number of vaccinations happening in Bolton right now is phenomenal – tens of thousands every single day.

‘And it is heartening to see the queues of people coming forward both for testing and for vaccinations in Bolton. This has not been an easy pandemic anywhere but it has been especially difficult in Bolton.’

Data show that Bolton remains the worst affected area in the country for Indian variant case numbers, although the number of infections appear to be stabilising at the latest count.

The town saw its daily average number of cases rise slightly 185 on May 17 to 186 on May 18, but increases are not as steep as they were in recent weeks.

It is the only area of the eight hotspots to have seen Covid hospitalisations in double figures (24), although separate MailOnline analysis yesterday showed beds being taken with coronavirus patients has since increased to 41 as of Tuesday.

Mr Hancock made the claim about the vaccine rollout while he was on the defensive today after he was the target of multiple tirades from former Downing Street adviser Dominic Cummings yesterday.

Matt Hancock’s ‘lies’ according to Cummings

Dominic Cummings claimed in his bombshell committee evidence that there were ‘numerous’ examples of Matt Hancock lying during the pandemic.

He gave four main examples – all of which Mr Hancock has made clear he rejects.

‘Lie’ 1: Hospital patients were being tested for Covid before they went back to care homes

‘We were told categorically in March (by Mr Hancock) that people would be tested before they went back to homes, we only subsequently found out that that hadn’t happened.

‘Lie’ 2: Patients were getting treatment they needed in first peak

Mr Cummings alleged Mr Hancock lied about everybody getting the treatment they deserved in the first peak when ‘many people were left to die in horrific circumstances’.

Asked to provide evidence of the Health Secretary’s lying, the former chief aide to the Prime Minister told the Commons committee: ‘There are numerous examples. I mean in the summer he said that everybody who needed treatment got the treatment that they required.

‘He knew that that was a lie because he had been briefed by the chief scientific adviser and the chief medical officer himself about the first peak, and we were told explicitly people did not get the treatment they deserved, many people were left to die in horrific circumstances.’

‘Lie’ 3: Pandemic plans were up to scratch

Mr Cummings said that assurances given to him by Mr Hancock in January last year that pandemic preparations were brilliant ‘were basically completely hollow’.

The former chief aide to the Prime Minister told the Commons committee he received a response from Health Secretary Matt Hancock assuring: ‘We’ve got full plans up to and including pandemic levels regularly prepared and refreshed, CMOs and epidemiologists, we’re stress testing now, it’s our top tier risk register, we have an SR bid before this.’

Mr Cummings told the committee: ‘I would like to stress and apologise for the fact that it is true that I did this but I did not follow up on this and push it the way I should’ve done.

‘We were told in No 10 at the time that this is literally top of the risk register, this has been planned and there’s been exercises on this over and over again, everyone knows what to do.

‘And it’s sort of tragic in a way, that someone who wrote so often about running red teams and not trusting things and not digging into things, whilst I was running red teams about lots of other things in government at this time, I didn’t do it on this.

‘If I had said at the end of January, we’re going to take a Saturday and I want all of these documents put on the table and I want it all gone through and I want outside experts to look at it all, then we’d have figured out much, much earlier that all the claims about brilliant preparations and how everything was in order were basically completely hollow, but we didn’t figure this out until the back end of February.’

‘Lie’ 4: PPE supplies were hampered by NHS and Treasury

Mr Cummings made an allegation that Mr Hancock squirmed over shortages of PPE during the pandemic.

He claimed that in mid-April, just before he and the PM were diagnosed with having Covid, Mr Hancock gave assurances that ‘everything is fine with PPE, we’ve got it all covered, etc, etc’.

However, when Mr Cummings returned to work he discovered there was a ‘disaster over PPE and how we were actually completely short, hospitals all over the country were running out’.

‘The Secretary of State said in that meeting this is the fault of Simon Stevens, this is the fault of the Chancellor of the Exchequer, it’s not my fault, they’ve blocked approvals on all sorts of things. I said to the cabinet secretary, please investigate this and find out if it’s true,’ Mr Cummings claimed.

Mr Cummings took aim at Mr Hancock over his introduction of a target of carrying out 100,000 tests a day last summer.

‘This was an incredibly stupid thing to do because we already had that goal internally,’ Mr Cummings said.

‘What then happened when I came back around the 13th was I started getting calls and No 10 were getting calls saying Hancock is interfering with the building of the test and trace system because he’s telling everybody what to do to maximise his chances of hitting his stupid target by the end of the month.

‘We had half the Government with me in No 10 calling around frantically saying do not do what Hancock says, build the thing properly for the medium term.

‘And we had Hancock calling them all saying down tools on this, do this, hold tests back so I can hit my target.’

Mr Cummings claimed that Mr Hancock should have been ‘fired for that thing alone’.

‘The whole of April was hugely disrupted by different parts of Whitehall fundamentally trying to operate in different ways completely because Hancock wanted to be able to go on TV and say ‘look at me and my 100k target’,’ the former aide said.

‘It was criminal, disgraceful behaviour that caused serious harm.