London: Prince Harry and Meghan have laid out a blueprint for their work outside the royal family with a series of business filings, showing more than half their new companies set up for the “entertainment” business.

The Duke and Duchess of Sussex, who now live in California and have already signed deals to produce Netflix shows and a Spotify podcast, are to pursue entertainment in earnest after stepping away from royal life to find “financial independence”. 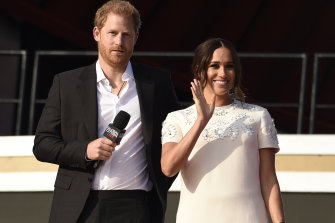 Prince Harry, the Duke of Sussex, left, and Meghan, the Duchess of Sussex.Credit:AP

Last week, it emerged the couple had set up 11 companies in Delaware, the state known for its flexible business laws and low personal income tax rates, while two further companies were registered on the same date, by the same lawyer and business manager who have represented Meghan since she was an actress.

They appear to have names which are meaningful to the couple, with one – Cloverdale Inc – bearing the same name as the street in which the young Meghan Markle lived with her mother in Los Angeles. Both Cloverdale and a second company, Riversoul Productions, are set up explicitly in the “entertainment” industry, and join companies Hampshire, Bridgemont and IPHW.

The couple is already known to be working under the umbrellas of Archewell Productions, to create their television output for streaming service Netflix, and Archewell Audio, which is expected to produce podcast episodes under the deal with Spotify, the music online streaming company.

They total seven separate companies specifically in the entertainment industry, along with another two publishing companies and three investment firms to match their one not-for-profit foundation. The companies appear to be a significant change of direction for the Sussexes, who have emphasised their dedication to their philanthropy and non-profit work through Archewell.

The pair appears on the paperwork for two publishing companies: Peca Publishing, which has the rights to the Duchess’s children’s book The Bench and is thought to be named for the Spanish word for freckles, and Orinoco Publishing, reported to house Harry’s forthcoming autobiography.

Three other companies – Nemawashi Holdings, Baobab Holdings and RPV Holdings – are set up for investments.

The companies were each incorporated by Richard Genow, Meghan’s long-time lawyer, and Andrew Meyer, her business manager.

Most were registered on July 16 last year and can be found in public records registered in California and Delaware.

It is not uncommon for business leaders to set up multiple entities in the United States, with experts suggesting the practice protects them from the potential failure of one company affecting another.

The process follows numerous commercial ventures for the Sussexes, with both recently announced as “impact officers” at Ethic, a US fintech firm, while Harry has already taken several new roles in America, including chief impact officer at coaching app Better Up and one of a panel of commissioners at the Aspen Institute’s “Commission on Information Disorder”.

It is not thought Meghan is planning a return to acting, although she has done voiceover work since becoming a member of the royal family.

They have both, however, made high-profile television appearances, including Meghan performing a comedy skit on the US chat show Ellen, and Harry making a star turn on James Cordon’s Late Late Show.

Fans have expected them to follow in the footsteps of Barack and Michelle Obama after they left the White House in creating on-message programmes in line with their public campaigning.

Meghan is already creating an animated children’s series for Netflix about a 12-year-old girl called Pearl “who learns to step into her own power when she embarks on a heroic adventure and meets important women from history along the way”.

When the couple announced their engagement, they were asked in a BBC interview about the actress’s decision to leave her career in television drama Suits to join the royal family.

“I don’t see it as giving anything up, I just see it as a change,” she said at the time. “It’s a new chapter.”

Saying she had been “very fortunate” to work on a long-running series, she told the Prince on camera: “I feel really proud of the work I’ve done there [on Suits] and now it’s time to, as you said, work as a team with you.”