Rapist Harvey Weinstein, 67, is sentenced to 23 years in prison for sex crimes in landmark #MeToo case as six of his accusers hug each other and sob from the front row of courtroom and his fiery lawyers blast the judge and jury saying the trial was unfair

Harvey Weinstein has been sentenced to 23 years in prison for sex crimes in a landmark #MeToo case that ended with six of his accusers sobbing and hugging each other from the front row of the courtroom.

Weinstein was sentenced to 20 years on the criminal sex act charge for forcibly performing oral sex on production assistant Mimi Haleyi in 2006. He was sentenced to three years for third degree rape for the attack on Jessica Mann in 2013.

Judge James Burke, who oversaw his trial, ordered Weinstein to serve the sentences consecutively and sentenced him to five years post release supervision for each charge.

Weinstein, who maintained a blank face throughout, was wheeled out of the courtroom as soon as the sentence was handed down as his accusers sobbed and hugged each other.

‘I feel remorse for all of the men who are going through this fight,’ Weinstein told the court before he was sentenced.

Weinstein said he was worried about ‘thousands of men’ being denied due process in the #MeToo era. In a rambling statement, he said he was ‘confused’ and that he believed he had a ‘serious friendship’ with Mann and Haleyi.

Once one of Hollywood’s most influential producers, Weinstein had faced the possibility of a maximum sentence of 29 years in prison. 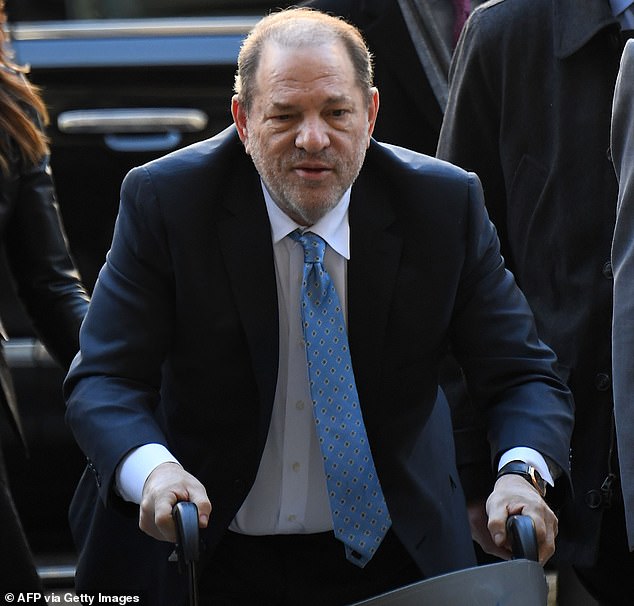 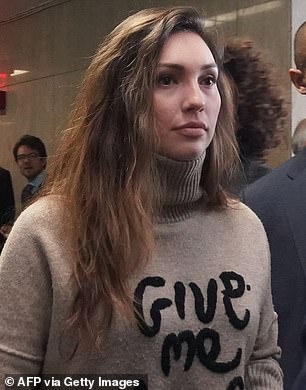 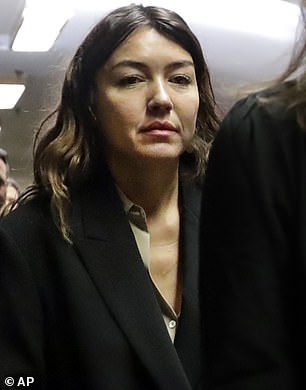 Jessica Mann, the woman Weinstein was convicted of raping, and Mimi Haleyi, the woman he’s accused of sexually assaulting, arrived in court on Wednesday ahead of his sentencing

Rotunno, who said they would be appealing by July, said the sentence was ‘too harsh’.

Manhattan District Attorney Cyrus Vance said afterward that the judge ‘sent a message today that this type behavior is something that any potential offender is going to have to consider.

‘The judge took it seriously, which is exactly how we think he should have. And we’re grateful.’

Mann and Haleyi, who delivered victim impact statements on Wednesday, were joined in court by four of Weinstein’s other accusers: Annabella Sciorra, Tarale Wulff, Dawn Dunning and Lauren Marie Young.

All six women testified during Weinstein’s high-profile trial last month but only Mann and Haleyi were allowed to address the court.

Haleyi, who was the first to deliver her statement, sobbed as she told the court spoke of the trauma she had endured since the attack, adding that Weinstein crushed her spirit and altered the course of her life.

She said the attack on her in Weinstein’s Soho apartment in 2006 came at a ‘very vulnerable point’ in her life.

‘He attacked me with physical force, with no regard… It diminished my confidence and faith in people. It was very embarrassing and hurtful,’ she said.

‘I eventually buried it, I minimized it. .. because that was my coping mechanism. In reality, this incident altered the course of my life. He crushed a part of my spirit.

She said Weinstein has seemed ‘completely disconnected from the gravity of the crime he has committed against me’.

Haleyi said the attack made her rethink her career in the entertainment business and left her feeling paranoid and afraid of retaliation.

She said she avoids dating because she doesn’t want to hurt people, have them feel embarrassed or distance themselves when they find out what happened to her.

She said that testifying against him was a way of healing given she had spent the past few years living in fear that he would retaliate against her.

‘At the time, I thought I was alone in this. I didn’t understand the extent of Harvey Weinstein’s calculated behavior. The pattern is obvious. I have no doubt if Harvery Weinstein was not convicted by this jury, he would have… again and again. 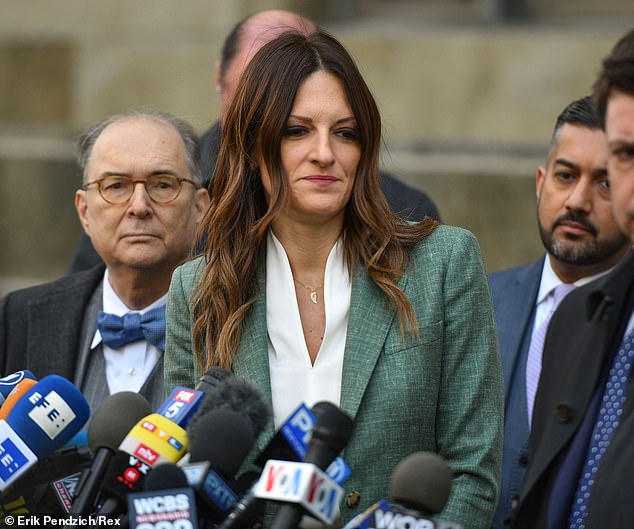 ‘I am relieved that there are women out there who are safer because he’s not out there.’

‘I have never felt vengeful. I just felt sad for myself, I felt sad for everyone he hurt and sad even for him for having done this to himself.’

Mann, in her statement, said she wanted to remind the court that she told Weinstein ‘no’ and that she wished she’d been able to fight him off when he raped her in a Manhattan hotel.

‘I am forced to carry that experience until I die,’ she said.

‘It takes a very special kind of evil to exploit connections to leverage rape.

‘Rape is not just one moment of penetration. It is forever,’ she said, before recalling a moment during the trial when she left the witness stand in tears and then could be heard screaming from an adjacent room.

‘The day my screams were heard from the witness room was the day my voice came back to its full power,’ she said.

Mann said that 12 people found Weinstein guilty of raping her but that he was ‘baffled at finally being held accountable’ because he still denies any wrongdoing.

She addressed the maxiumum four-year sentence Weinstein could face on her charge alone by comparing it drug offenses that could have a 20-year sentence.

‘How am I not worth more than cocaine?’ Mann said.

Mann added that she now wanted to create a future ‘where monsters no longer hide in our closets’.