Frontier Airlines removed passengers from a flight that was about to depart Miami and take off for New York’s LaGuardia Airport on Sunday night after it claimed that members of a Hassidic Jewish family refused to wear masks.

But family members and witnesses claim that the airline staff overreacted to a 15-month-old infant whose face was not covered – even though federal guidelines do not require those under 2 years of age to wear masks.

Other witnesses also alleged that Frontier staffers ‘cheered’ and ‘high-fived each other’ while exclaiming ‘We did it!’ after ordering the Jewish passengers off the plane.

The airline said it has not ‘seen any information to support these claims.’ 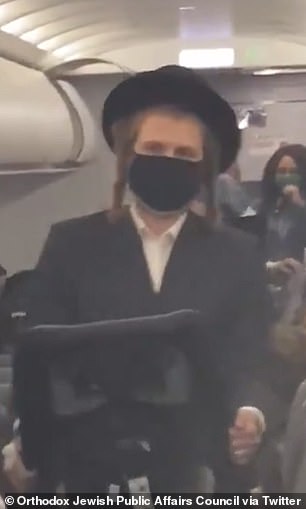 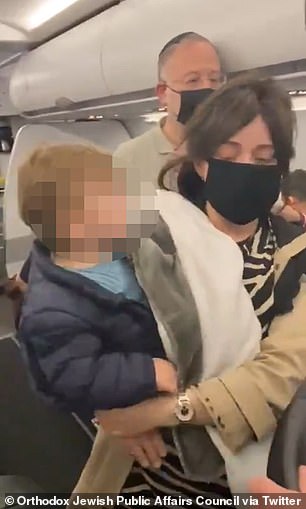 The image on the left shows a Hasidic Jewish passenger carrying a baby seat with a 15-month-old infant son. The image on the right shows another small child with the Hasidic Jewish family that was told to deplane by Frontier Airlines before a flight was supposed to take off for New York from Miami on Sunday night 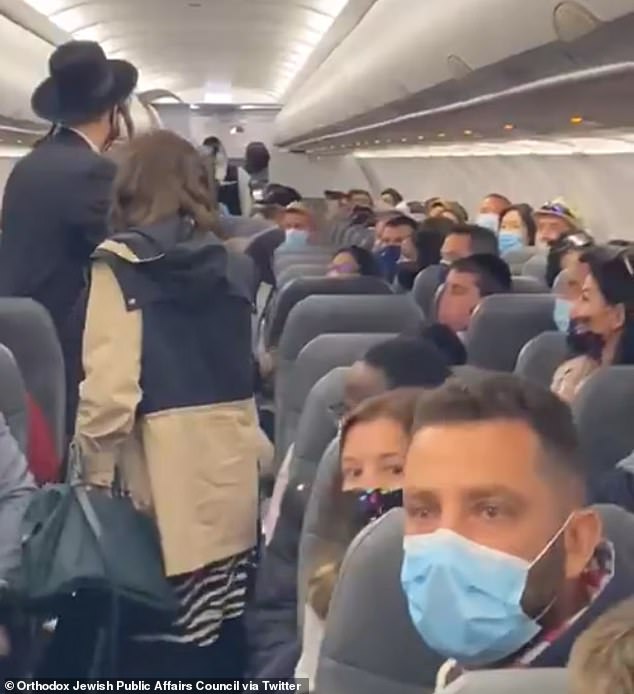 Martin Joseph, 51, of Brooklyn, New York, said he was traveling with 21 other relatives. The family of 22 people included 13 adults and nine children whose ages range from 15 months to five years 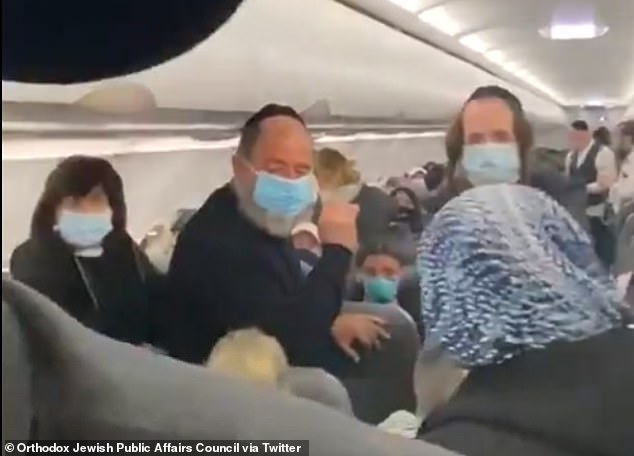 Cell phone video appears to support the family’s claim that they were wearing masks. The image above shows several members of the Hasidic Jewish family

The airline released a statement claiming that ‘a large group, including adults, refused to wear masks’

‘Yesterday, while flight 2878 from Miami to New York-La Guardia was preparing to leave the gate, a large group of passengers repeatedly refused to comply with the US government’s federal mask mandate,’ Frontier spokesperson Jennifer de la Cruz told DailyMail.com.

‘Multiple people, including several adults, were asked repeatedly to wear their masks and refused to do so.

‘Based on the continued refusal to comply with the federal mask mandate, refusal to disembark the aircraft and aggression towards the flight crew, local law enforcement was engaged.

‘The flight was ultimately canceled.’ 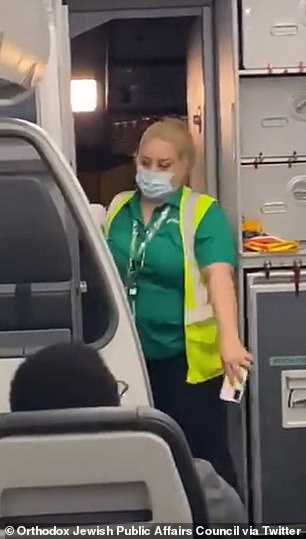 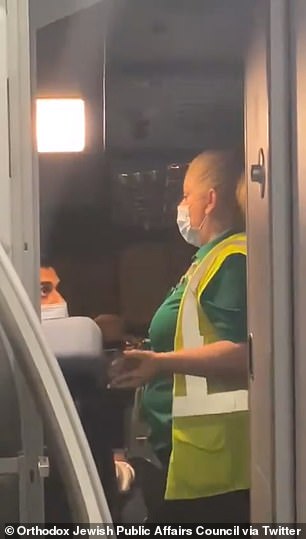 Added de la Cruz: ‘Frontier Airlines and US government policy mandate that all passengers over the age of two, other than those with a recognized ADA disability that prevents them from wearing a mask, must wear a mask while onboard an aircraft.

‘To be clear, the issue did not involve a child under the age of two.’

Martin Joseph, 51, of Brooklyn, New York, said that it was his family that was unfairly scapegoated and removed from the plane by Frontier staff.

Joseph said that he and his family of 21 others, including 13 adults and 9 children whose ages range from 15 months old to five years old, boarded the flight without any issues.

‘We came onto the plane, everything was smooth, no problems at all,’ he told DailyMail.com just before noon on Monday as he returned to New York from South Florida.

‘Everybody wore the masks and followed the mandate.’ 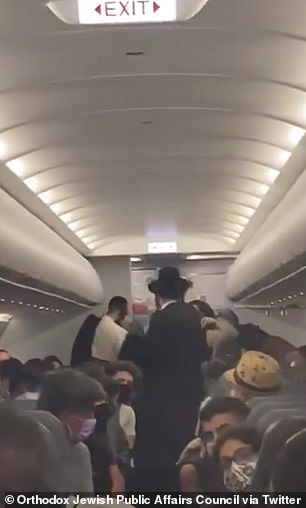 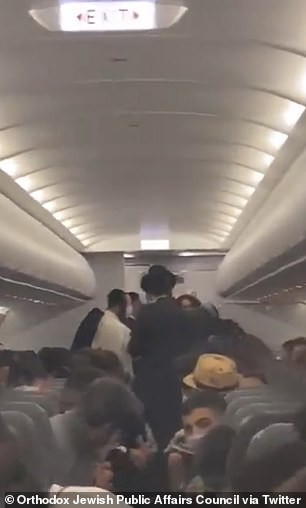 Joseph told DailyMail.com that most of his family occupied the last two rows of the plane, which was ‘jam packed.’

Just before takeoff, Joseph said that one of the flight attendants approached his daughter because her 15-month-old son was not wearing a mask.

When the family tried to explain to the attendant that the infant was not required to wear the mask, the stewardess repeated her demand to know why the baby was not masked, according to Joseph.

Moments later, a staffer came on board with a pen and pad in hand, Joseph said. Then someone on the loud speaker announced that all passengers in the last two rows were required to deplane.

‘Everybody was sitting in the plane ready for take off’ when the announcement came through, Joseph told DailyMail.com.

‘Obviously in the last two rows there were only Hasidic people sitting there with tiny children,’ he said. 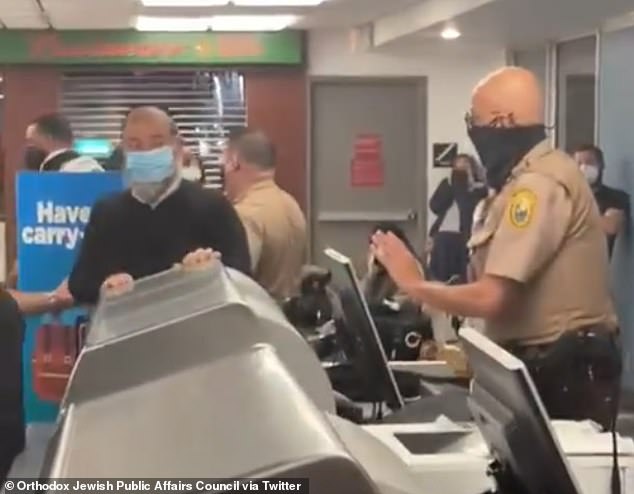 The incident prompted intervention by law enforcement officers. The image above shows an officer and one of the passengers in the airport terminal in Miami on Sunday

Joseph, who was seated a number of rows ahead of the rest of his family, said he tried to speak with the airline staff in an attempt to smooth things over, but the staff was not receptive.

‘Please be sensible,’ Joseph said he told the stewardesses. ‘I’m going to sit in the back of the plane and make sure everyone is wearing a mask.’

He even offered to give the airline staff the credit card that was on file to make sure that the family was in compliance with the rules.

When staff refused, Joseph said that the children started crying.

‘All the children started crying,’ he said. He said his daughter with the 15-month-old baby, who is six months’ pregnant, ‘started having contractions.’

After all the passengers were forced off the plane, Joseph said that Frontier did not apologize or offer any hotel accommodations. Instead, he rented a room at the Holiday Inn and flew back to New York on Jet Blue early Monday morning.

There were no issues aboard the Jet Blue flight, he said.

‘I want to make sure other people don’t go through what happened to us,’ he said.

‘We paid for tickets and we were just harassed. It was an anti-Semitic episode. We want to make sure this doesn’t happen again.

‘This reminds me of 80 years ago when we were singled out in Nazi Germany,’ he added.

One purported witness said he heard staffers say: ‘A job well done to those Jews’

The airline ordered everyone off the plane after other passengers spoke up in defense of the family, according to OJPAC 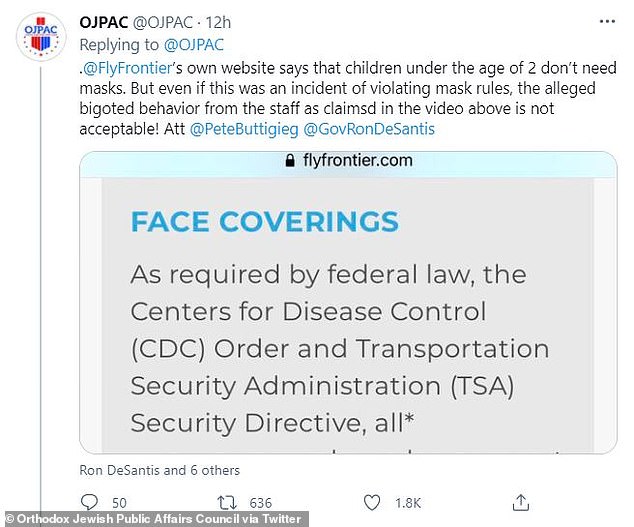 They said that the family was indeed wearing masks and that flight attendants and other staffers were ‘high-fiving each other’ when they ordered the Jewish passengers removed from the aircraft.

When asked about claims that airline staff made anti-Semitic comments, de la Cruz, the Frontier spokeswoman, told DailyMail.com: ‘I have not seen any information that would support these claims.’

Meanwhile, the Anti-Defamation League has demanded that Frontier Airlines launch a ‘full and transparent investigation’ into the incident.

The Orthodox Jewish Public Affairs Council posted several videos filmed by a passenger showing the Hasidic family being removed from the cabin.

The OJPAC also posted videos in which witnesses who aren’t members of the family are interviewed. These witnesses corroborated claims that the airline unjustly scapegoated the Hasidic family.

In the first video posted late on Sunday night, the OJPAC claims that applause could be heard from airline staff as they were removing the Jewish passengers.

The cheering staffers were also alleged to have exclaimed ‘We did it!’

The video shows all of Hasidic passengers wearing face coverings. One of the family members is then seen carrying the infant in a baby seat as he walks through the aisle.

At one point, the pilot is heard speaking to the passengers through the public address system. 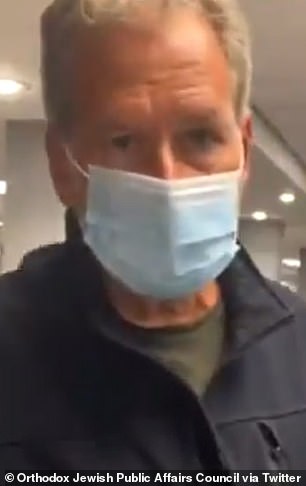 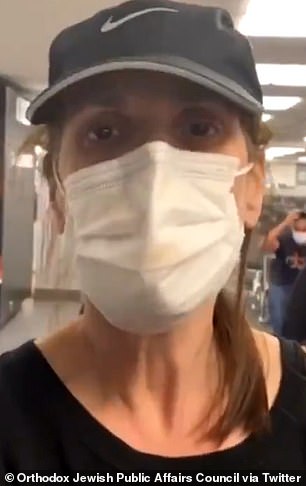 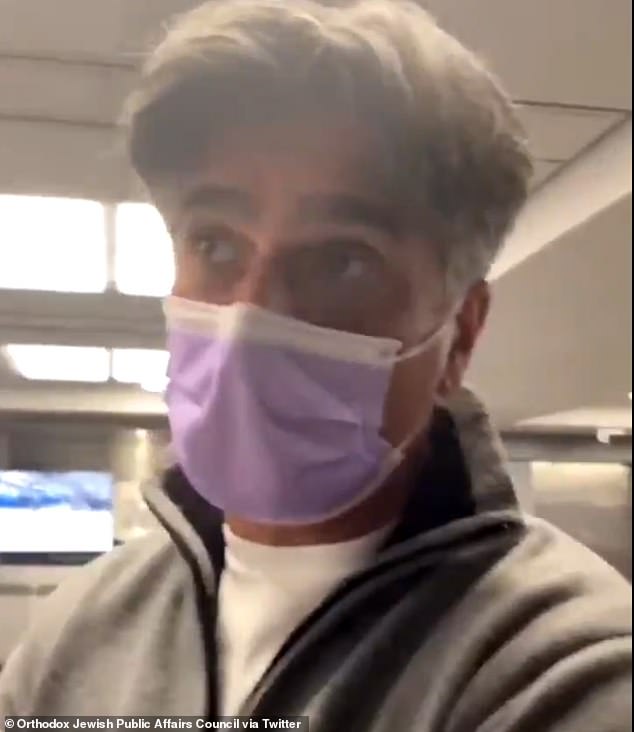 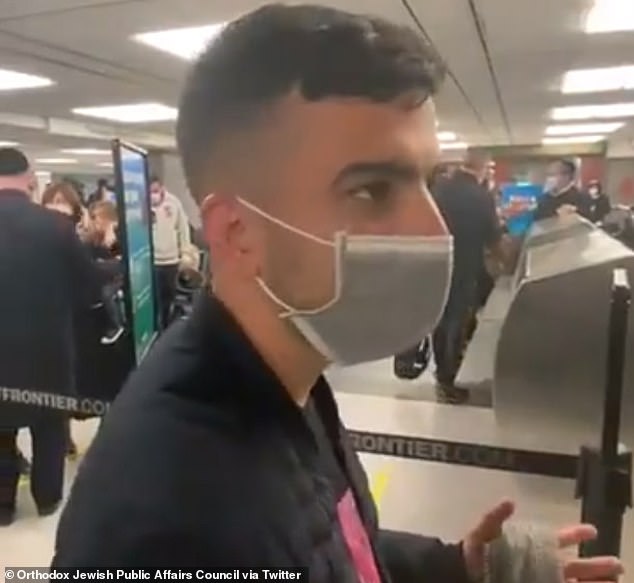 In another video posted by OJPAC, one person who says he was a passenger and not in any way affiliated with the Hasidic Jewish family claims he ‘heard some nasty things being said,’ though he did not specify

‘Folks, I need everybody in your seats,’ the pilot is heard saying as the passengers witness the commotion.

‘She’s a one-year-old baby,’ one of the passengers is heard saying.

Another Jewish passenger who came to the defense of the Hasidic family is heard saying: ‘You’re gonna pay the consequences!’

‘This is anti-Hasidic Jews, that’s what this is all about,’ an Orthodox Jewish passenger yelled toward the cockpit.

‘This is an anti-Semitic act!’

The man then yells at airline officials: ‘Anti-Semites! Jew haters!’

The video records a conversation among several passengers who reported that a few of the Hasidic youngsters briefly took off their masks to eat a snack.

At that point, airline staff intervened and ordered the family off of the plane, according to the overheard passengers.

In another video posted by OJPAC, another man who claims to have been a passenger who is not a member of the Hasidic Jewish family offers a damning account, suggesting that airline staffers were motivated by anti-Semitism.

‘I saw [airline staffers] high-fiving each other and saying “Job well done to those Jews”,’ according to the passenger interviewed, whose name was not given.

OJPAC also posted another video in which a woman wearing a white face mask and a dark-colored Nike hat is being interviewed.

The woman told OJPAC that a Hasidic family of three people who were alleged to have not worn masks did indeed board the plane while having their faces covered.

‘[Airline staffers] started to scream at me that I should sit down,’ the woman says she was told after noting that the family in question were all masked.

‘At the end, they all high-fived each other and I think they said: “We did it!”’

OJPAC posted another purported eyewitness account from a passenger who says he spoke with one of the stewardesses about the incident.

‘What’s going on? Can we know something about the situation?’ the passenger says he asked the stewardess.

‘No, go sit down in your place,’ the stewardess is alleged to have responded.

The purported passenger then claims to have also seen staffers high-five each other after they ‘achieved’ their goal of ‘throwing them from the airplane.’

In another video posted by OJPAC, one person who says he was a passenger and not in any way affiliated with the Hasidic Jewish family claims he ‘heard some nasty things being said,’ though he did not specify.