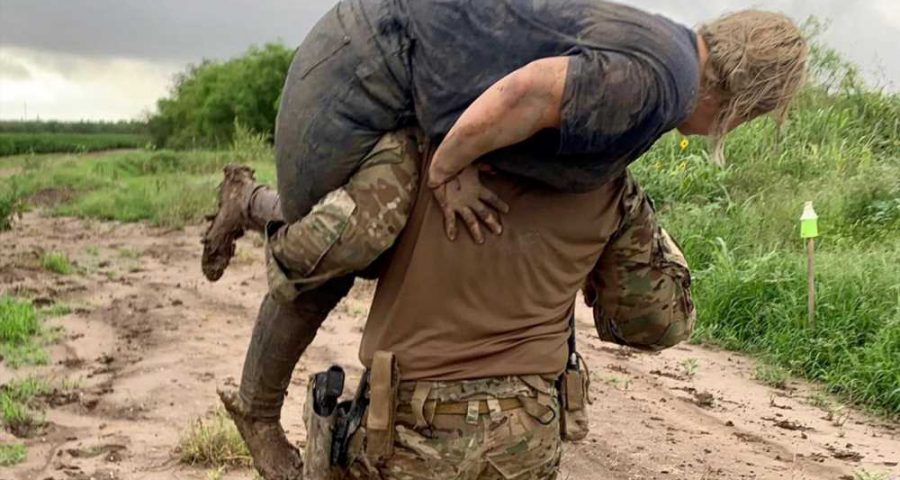 A powerful photo shows a Border Patrol agent carrying a hurt illegal immigrant to safety during an operation along the US-Mexico border.

The undated photo was posted on Twitter Thursday by Brian Hastings, the chief Border Patrol agent for Texas’ Rio Grande Valley sector — the epicenter of the ongoing crisis along the southwestern frontier.

“HAPPENING NOW- LEFT BEHIND,” Hastings wrote. “[Border Patrol] Special Operations Detachment carry a migrant out of the brush and to safety. The migrant suffered an injury while being smuggled into the US.” He added the hashtags, “#Rescues,” “#SavingLives,” and “#Heroes.”

The picture of the unidentified agent walking through rough terrain with the immigrant slung across their shoulders is a searing image of the current surge of attempted illegal border crossings and the effects of people smuggling.

In US Customs and Border Protection’s (CBP) June operational update, the agency said it had carried out 7,084 rescues nationwide between the beginning of October 2020 and the end of May. Of those rescues, 6,898 (97.4 percent) took place along the US-Mexico border.

Lawmakers from both parties have accused the Biden administration of incentivizing people from Mexico, Central America and other nations to attempt the dangerous journey to the US, often paying smugglers (known colloquially as “coyotes”) to guide them across the southern border.

Rep. Henry Cuellar (D-Texas), whose district includes part of the Rio Grande Valley, told MSNBC last month that the smugglers can “make $6,000 to $8,000 per person”.

The coyotes often behave cruelly toward their immigrant customers, often — as suggested by Hastings — leaving them behind in dangerous terrain if they’re too slow or injured to keep up with the group, cramming them into vehicles like sardines, holding them for ransom after crossing the border, even dropping young children over border fencing and leaving them to fend for themselves.

Despite the dangers, the number of CBP apprehensions at the southern border topped 180,000 in May of this year, the first month that had happened since April 2000.