A group of Holocaust survivors who were brought to Britain after escaping the horrors of the Nazis have gathered in Prague to recreate a 74-year-old photograph.

In 1945, the group of 300 children posed in the Old Town Square in Prague, in what was then Czechoslovakia, after they were freed from Theresienstadt concentration camp.

They were taken to the Lake District to recover and became known as the Windermere Boys.

Now in 2019, the last 10 survivors have gathered on the same spot in Prague to take the same picture again with hundreds of their relatives. 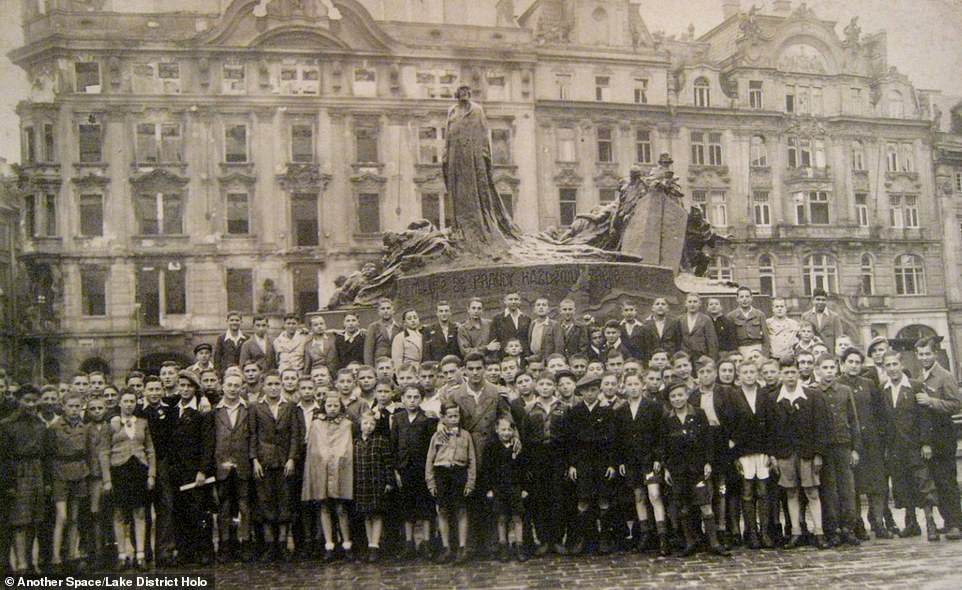 1945: This picture shows a group of Holocaust survivors known as the Windermere Boys, after the beauty spot in the Lake District where they were taken after escaping the horrors of World War II. They are posing in Prague’s Old Town Square in what was then Czechoslovakia, in front of a memorial to 15th-century religious reformer Jan Hus 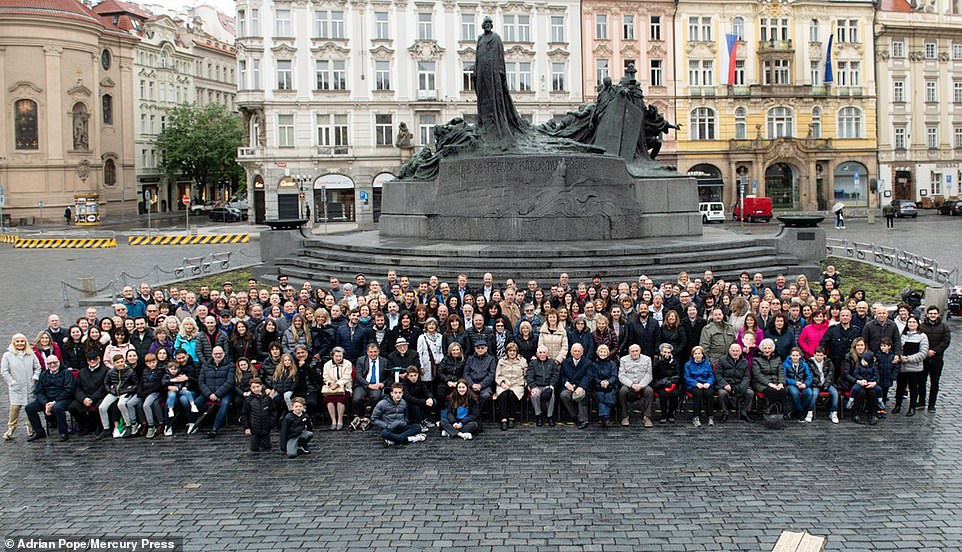 2019: The last 10 survivors return to Prague with 200 relatives from all over the world, 74 years after they were liberated from Nazi camps in Czechoslovakia. Most of them settled elsewhere in the UK but they meet once a year. The group is also planning a memorial event to mark the 75th anniversary of the end of the Second World War in 2020

Trevor Avery, director of the Lake District Holocaust project, said: ‘This photo is iconic. It’s the beginning of their time in Windermere.

‘They’d come from hell on earth and here they were coming to Wordsworth’s paradise. It was extraordinary.

‘It was incredibly moving to be stood in front of the monument. The most moving part was when the group started singing in Hebrew and Yiddish. These were the songs their mothers and fathers would have sung.

‘They were the most heart-aching, beautiful voices heard across the town square in Prague. It sent shivers down my spine.’

Around 200 people – the children and grandchildren of the survivors – flew from across the world including the US, Canada and Israel to take part in the recreation.

According to the Lake District Holocaust Project, the children were brought to Cumbria for a ‘period of recuperation before setting out on new lives’. 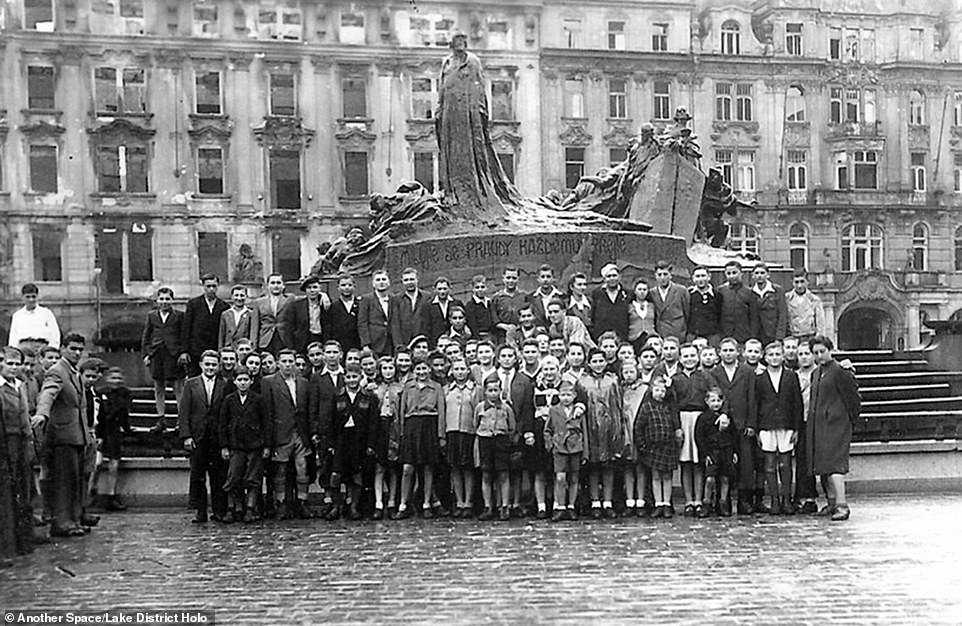 Freedom: The children pose in 1945 after they were liberated from the horrors of Nazi concentration camps in German-occupied Czechoslovakia. Aged between three and 17, they were flown to Britain to begin new lives after the war

They had been liberated from a concentration camp in the town of Theresienstadt, now known as Terezin, in German-occupied Czechoslovakia.

Aged between three and 17, they were brought to Britain by Stirling aircraft of 196 Squadron, travelling across Europe in groups of around 30 children at a time.

After arriving in Britain they were taken to the Lake District by buses and army trucks and were placed in hostels near Windermere.

As time went on the group split up and most of them settled elsewhere in the UK, but those who are left still meet up once a year to share their experiences.

The group is also planning a memorial event to mark the 75th anniversary of the end of the Second World War in 2020. 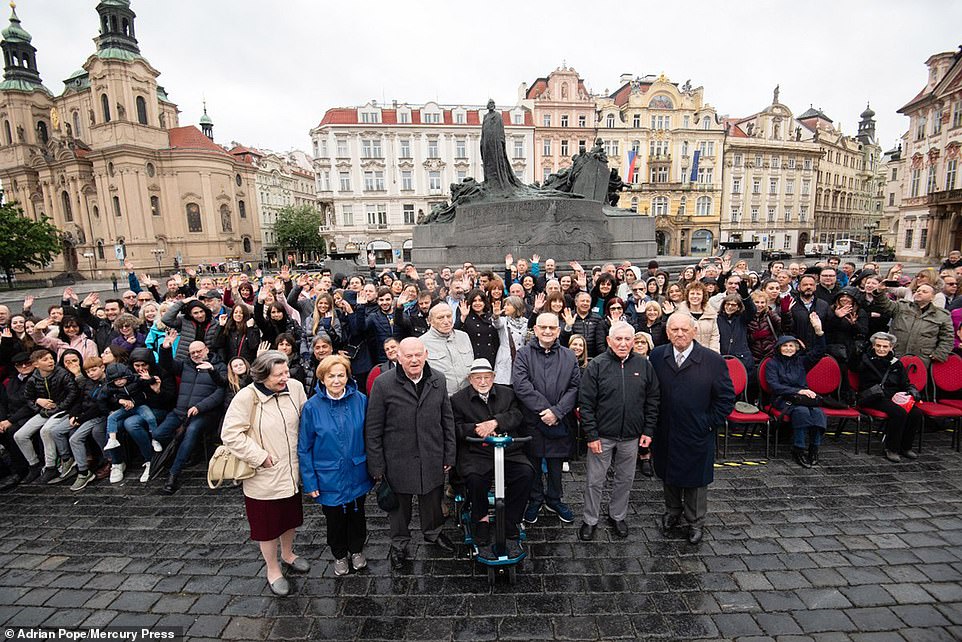 Front and centre: The survivors from Terezin concentration camp – known in German as Theresienstadt – stand with their families in front of the Hus memorial in Prague as they recreate the 74-year-old picture

One of those visiting Prague was Judge Robert Rinder who discovered during the making of BBC show Who Do You Think You Are? that his grandfather was a Holocaust survivor who was also taken to Windermere.

Mr Avery said: ‘He said it was incredibly tough what his grandfather went through and Windermere was the light.

‘It’s such a change in circumstances. You couldn’t have anything more extreme than being liberated from a camp to be taken to a plane and flown to England and end up in a place like Windermere.

‘They’d been taken from their families and left on their own in these camps. They had to learn to live one day at a time. They couldn’t think too much about the past because it was too painful and daren’t think about the future.

‘Some had spent their entire childhood years in ghettos. It was four years of horror.

‘When they came to Windermere it was very bewildering. They still didn’t know what had happened to their families.

‘A lot of them said they had fond memories of Windermere. They felt like they’d arrived in paradise given where they’d came from.’ 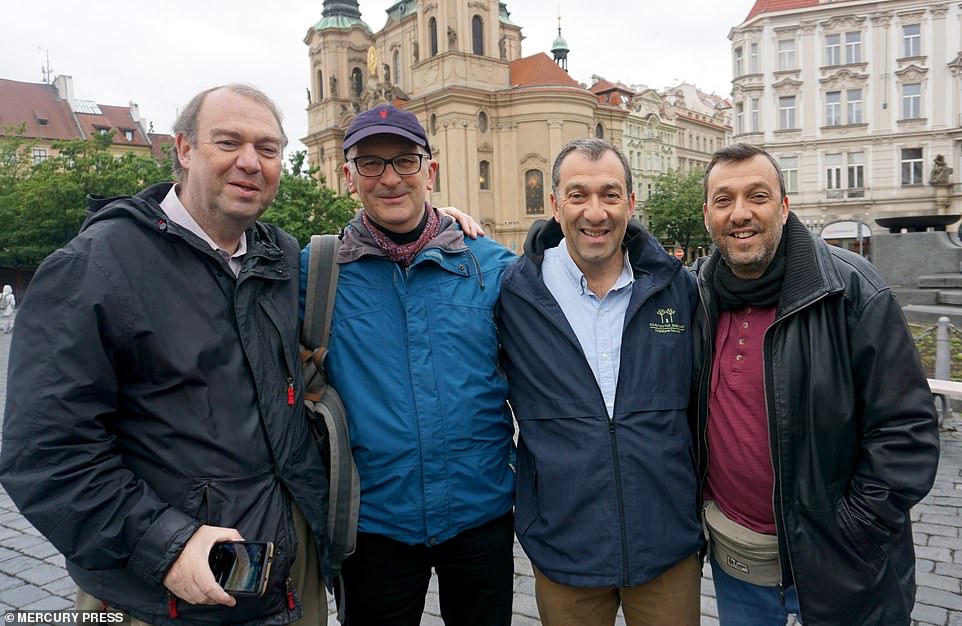 Meet-up: Trevor Avery (second left, in blue jacket), director of the Lake District Holocaust Project which aims to tell the story of how the youngsters ended up in Windermere, poses with relatives of survivors in Prague