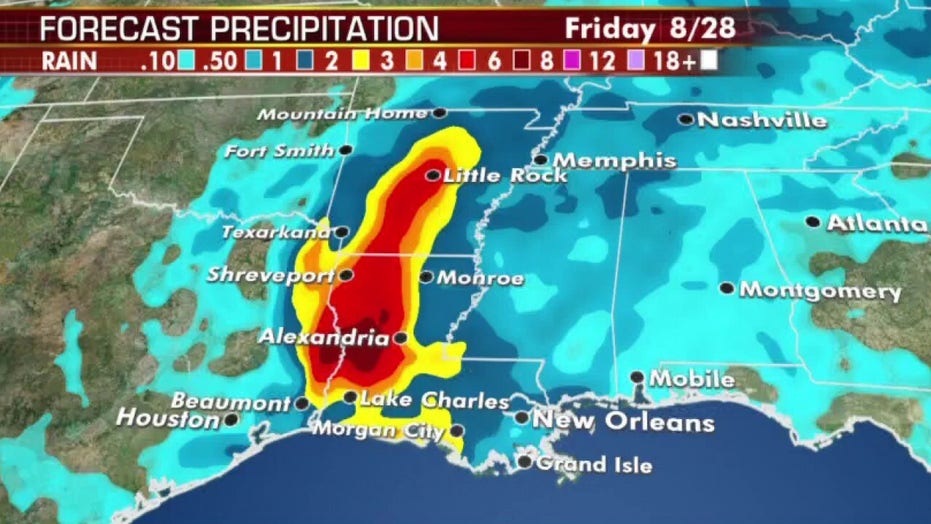 Hurricane Laura battered the Louisiana and Texas coasts as it made landfall early Thursday as an "extremely dangerous" Category 4 storm.

The hurricane brought a catastrophic storm surge, extreme winds and flash flooding to the southwestern part of Louisiana overnight, according to the National Hurricane Center.

"TAKE COVER NOW! Treat these imminent extreme winds as if a tornado was approaching and move immediately to the safe room in your shelter. Take action now to protect your life!" the hurricane canter warned at 1 a.m. ET.

The safest place to be in a hurricane is in a reinforced room away from the windows. The hurricane center said to take cover under a piece of sturdy furniture and use mattresses, pillows and blankets.

The hurricane center said if the “life-threatening” storm surge occurs during high tide, waters could rise up to 15 feet from Sea Rim State Park, Texas, to Johnson Bayou, La., including Sabine Lake and Rockefeller Wildlife Refuge to Intracoastal City and up to 20 feet from Johnson Bayou, La. to Rockefeller Wildlife Refuge, including Calcasieu Lake.

The center said an “unsurvivable storm surge with large and destructive winds will cause catastrophic damage” from Sea Rim State Park in Texas to Intracoastal City in Louisiana, moving up to 40 miles inland. Flood water won’t fully recede for several days.

“This is a life-threatening situation,” the hurricane center said Wednesday evening. “Persons located within these areas should take all necessary actions to protect life and property from rising water and the potential for other dangerous conditions. Promptly follow evacuation and other instructions from local officials.”

Thousands were without power in Louisiana as the hurricane closed in on the state.

Laura was moving north north-west and a turn northward was expected overnight, a path the hurricane center said Laura will likely continue Thursday before moving northeast Thursday evening into Friday.

Laura’s eye is expected to move through northwestern Louisiana on Thursday, through Arkansas Thursday night and over the mid-Mississippi Valley on Friday as is rapidly weakens.