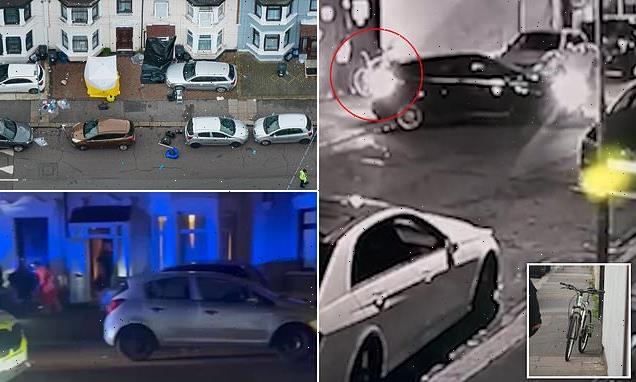 Armed officers and paramedics raced to the scene of the triple shooting inside a Victorian terraced property on Henley Road, Ilford at around midnight on Tuesday – the 86th homicide to rock the capital this year alone.

Three men, two in their 20s and one in his 30s, were discovered inside the home with gunshot wounds as horrifying gang violence appeared to spill out onto the streets of an East London suburb amid the Diwali celebrations late last night.

Neighbours told MailOnline that the sound of nearby fireworks masked the noise of gunshots at the suspected ‘drug den’. But one eyewitness claims they saw cars approach the property before firing on the trio.

Others claim the murder suspects rode up to the property on push bikes before bundling into a getaway vehicle and escaping.

One man who lives in Henley Road said he watched a man in a pale hooded jacket dump a bicycle just a few hundred yards from the shooting, which happened around 12.10am on Tuesday morning.

Police sources confirmed to MailOnline today that the white mountain bike that was left perched on a wall at the top of the road was ‘of interest’ to detectives.

Another resident told the Telegraph how they had spotted a man wearing a ‘black Joker-style mask’ running through nearby gardens shortly after the shocking attack.

Uniformed officers today sealed off parts of the residential area, which is dotted with nearby parks and homes costing more than £500,000, while forensic teams comb through the crime scene.

Tuesday’s fatal attack marked the fifth killing within a ten-mile area of east London in the past week alone, and is the latest grisly attack to shake the core of the capital. 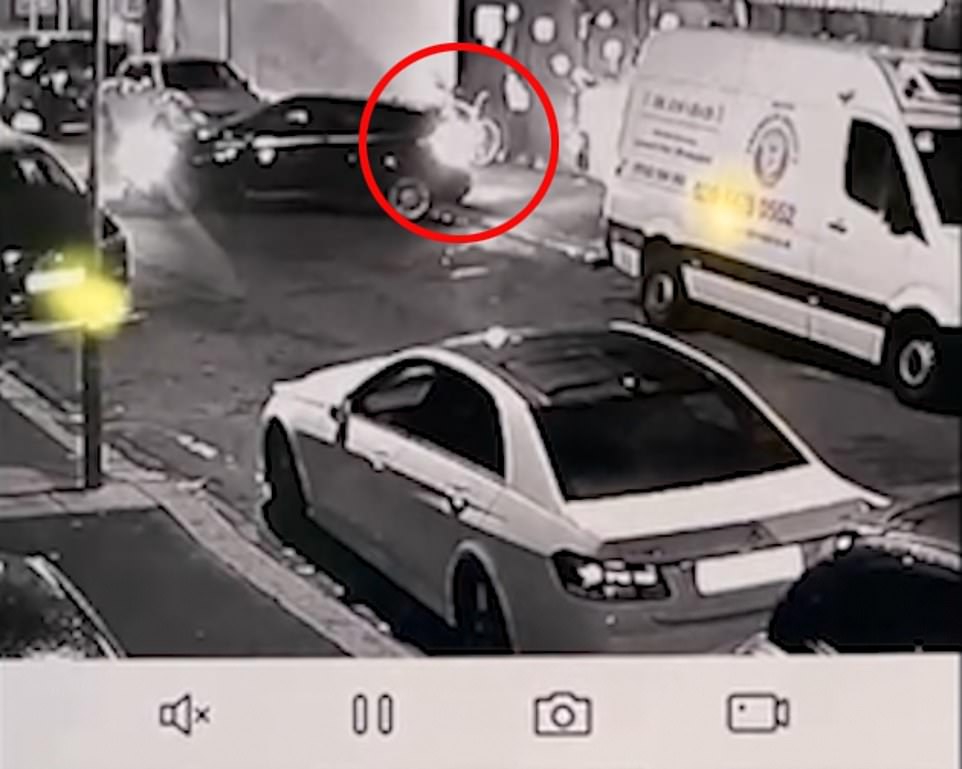 Local residents claim gang members arrived on bicycles before fatally shooting two young men and leaving a third in critical condition as detectives launched a hunt for a ‘Joker mask-wearing’ gunman in east London. Pictured: Residential CCTV footage shows an abandoned bicycle that police are said to be investigating as part of their murder probe 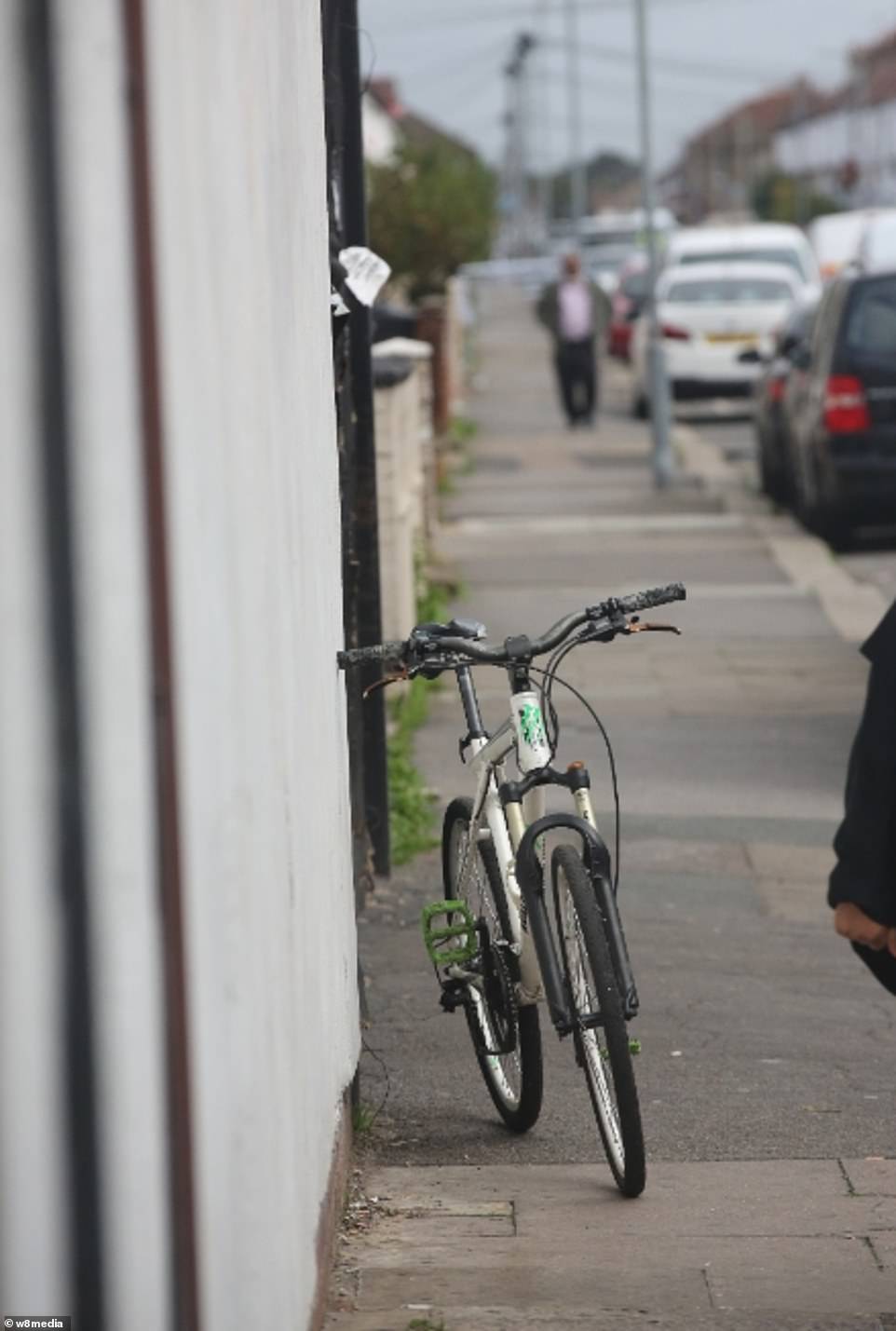 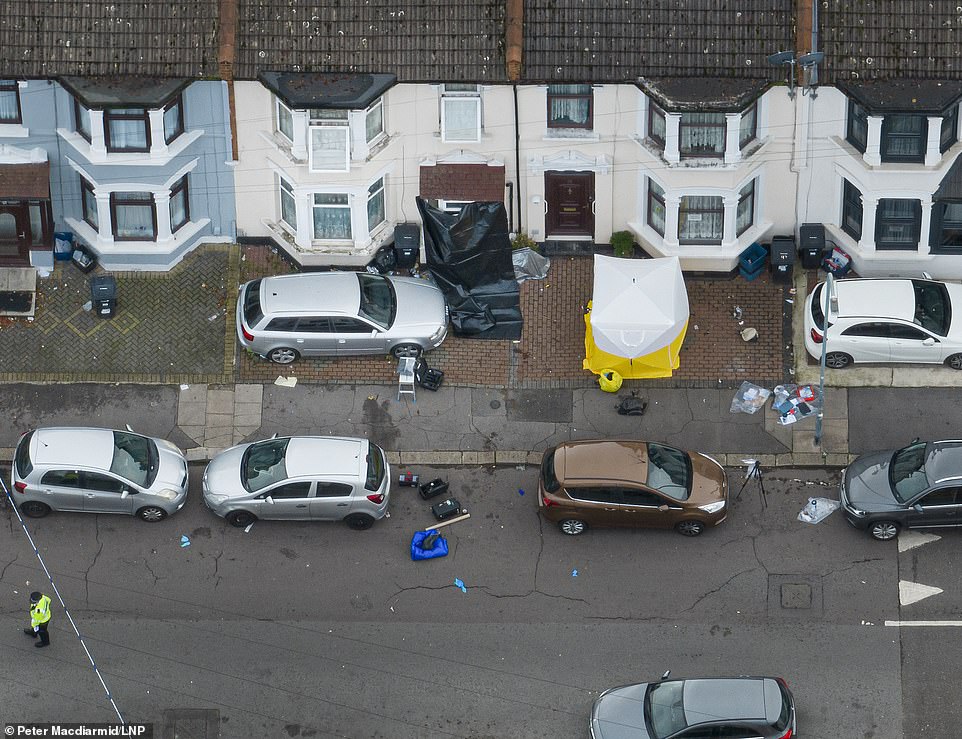 Armed officers and paramedics rushed to the scene of the triple shooting in Henley Road, Ilford at around 12.16am on Tuesday morning 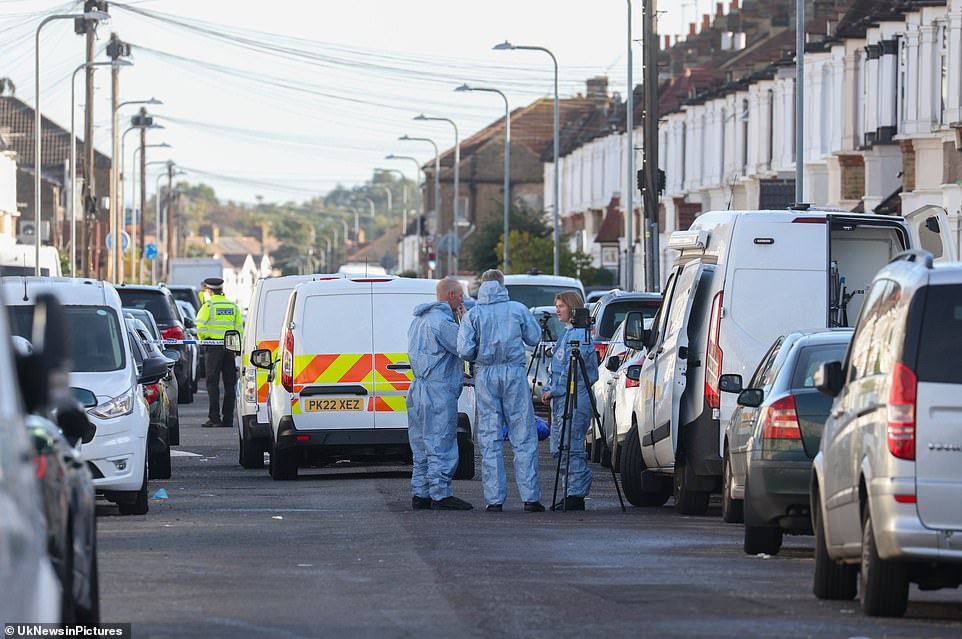 Uniformed officers today sealed off parts of the residential area, which is dotted with nearby parks and homes costing more than £500,000, while forensic teams comb through the crime scene 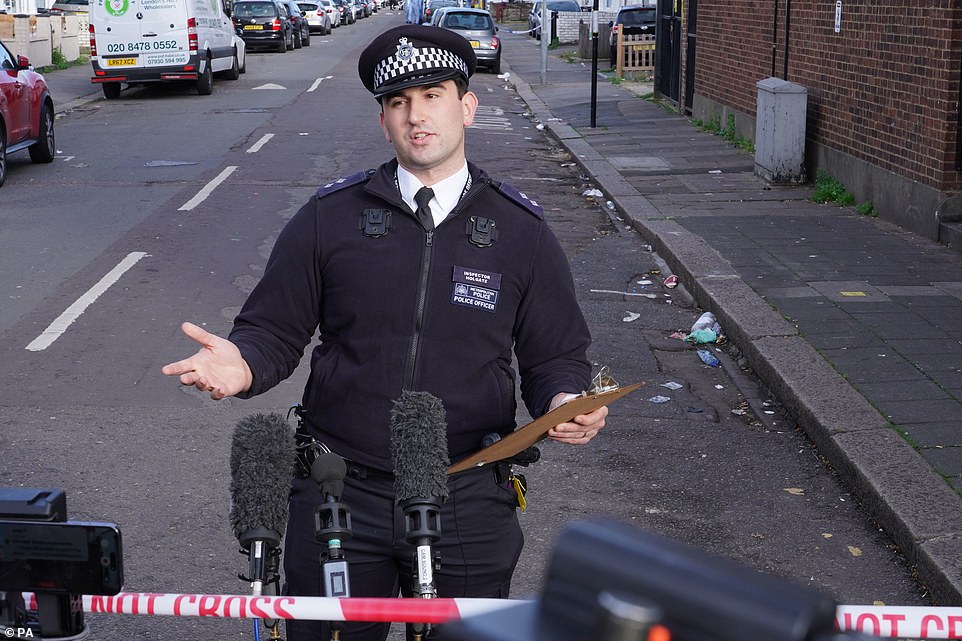 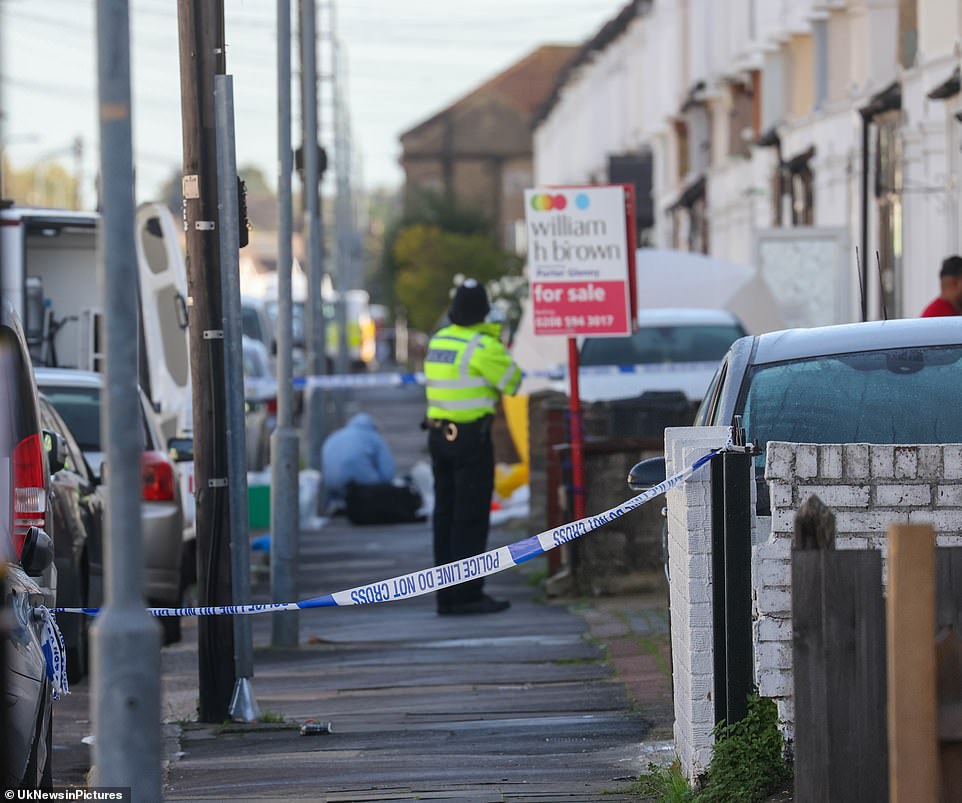 Horrified neighbours feared the shooting was sparked by rival gangsters at a notorious ‘trap house’ as vicious gangland violence spilled out onto what was once a quiet residential street.

The sister of the second man shot dead visited the scene in Henley Road, Ilford, East London, this afternoon and said that he had been visiting a friend when he was attacked.

Inspector Dave Holgate of the Met Police, addressed the media on Tuesday afternoon and said: ‘Tragically two men lost their lives this morning and another was seriously injured after an appalling act of violence here in Ilford.

‘We were called at 12.16am to reports of a fight and shots fired right here on Henley Road.

‘Inside the address officers found three men with gunshot wounds, two of whom have sadly died. The third remains in hospital with critical injuries.

‘Inquiries are ongoing to notify all next of kin and our thoughts are very much with their families today.

‘While I cannot discuss the details of the officers’ homicide investigation, I can confirm at their stage no arrests have been made.

‘There are a number of crime scenes in place and we thank local residents for their understanding and cooperation while our specialist and forensics teams do their job.’

Alex Raducu, 33, who has lived in the Henley Road area for five years and works as a courier said he initially thought the shots were fireworks.

He said: ‘I thought it just was fireworks…It was crazy, I then heard a helicopter flying around above me. It was there for 10 or 15 minutes.’

According to locals the area has been increasingly blighted by violent crime in recent times.

And a chicken shop close to the scene of today’s murder was temporarily shut after a young boy was attacked.

Another resident, Kashif Patel, who was stabbed in the area eight years ago, warned that gun use in Henley Road was not uncommon.

He told Sky News: ‘I don’t feel like it’s a good place to raise a family… If I was thinking about my mum or sisters, I wouldn’t want them living in this area, it’s not safe.’

Samima Ahmad, 50, who lives alone on Henley Road, added of last night’s incident: ‘I heard everything, I was shaken by the screams and shouting around 12.15am.

‘There was bunch of youngsters running around, it was a gang of people. After about an hour there was an ambulance, helicopters and police, it was very frightening.

‘The shots were obscured by the fireworks, it was about 10 doors down [from where I live].’

Anyone with dashcam, video doorbell or private CCTV footage of the initial fight are encouraged to get in touch as police probe the fatal shooting.

Homicide offences in the Met Police’s London boroughs sit at 87 this year, compared with the 109 between January and October 2021.  In 2021 there were more than 130 recorded homicides in the Met’s area.

Councillor Jas Athwal, leader of Redbridge Council, called for more police as he spoke to reporters at the scene.

He said: ‘I think more police across the whole of the capital, these are numbers that have been cut over successive governments, we have to make sure we get the police here. 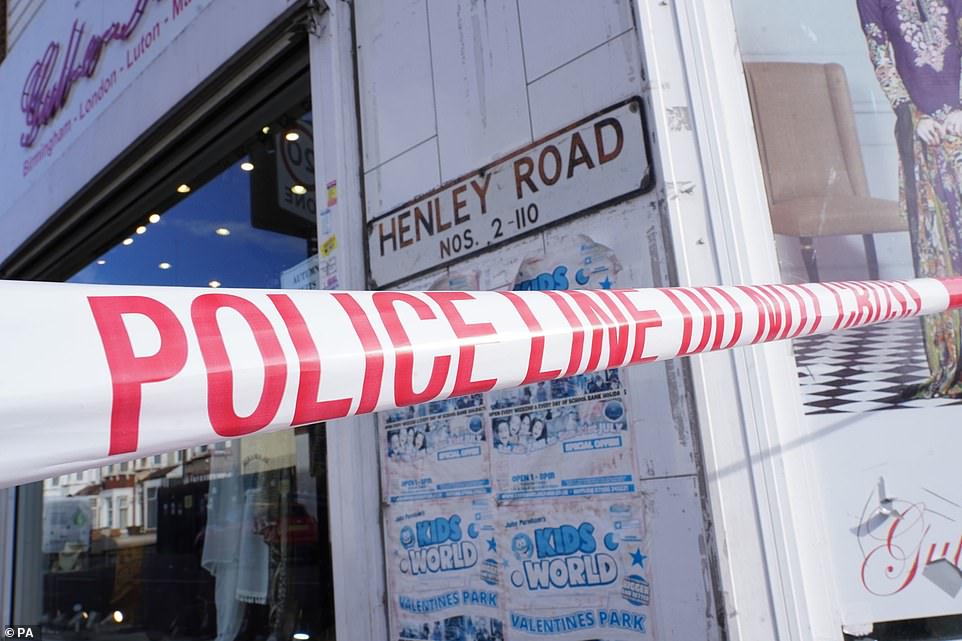 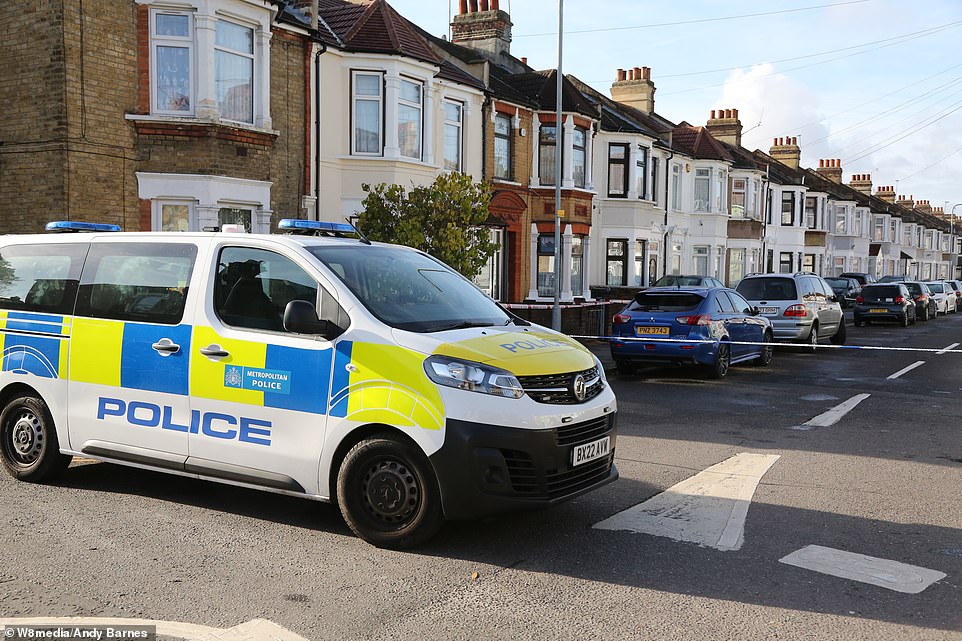 Tuesday’s fatal attack marked the fifth killing within a ten-mile area of east London in the past week alone, and is the latest grisly attack to rock the capital’s communities 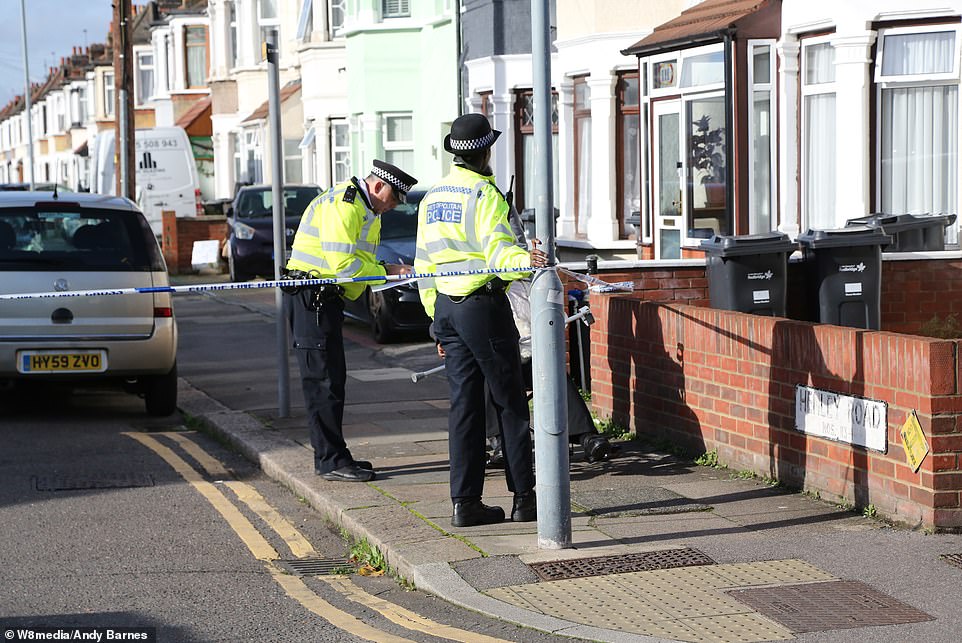 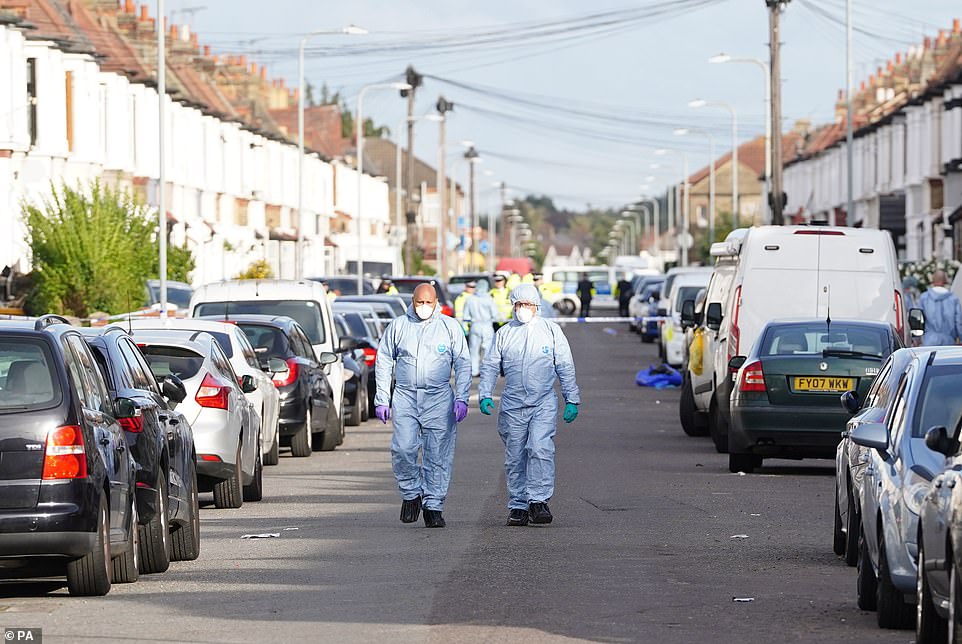 ‘We have been complaining about this in my role as London Councils lead on crime and community safety, I made that plea to the new Metropolitan Police commissioner only last week and he agrees that we need more police.’

He added: ‘I think sometimes these things build up over time and that’s where the police is needed to stop that building up over time and I think if we could get that we would be in a better place.’

Sam Tarry, Labour MP for Ilford South, tweeted today: ‘Utterly shocking; my heart goes out to the family of those killed.

‘This is yet the latest in a recent wave of violence in our community; not nearly enough is being done to combat violent crime and protect my constituents.

‘I will be having urgent conversations with the MET.’

A spokesman for London Ambulance Service added: ‘We were called at 12.12am today to reports of a shooting on Henley Road, Ilford.

‘We sent a number of resources to the scene, including two ambulance crews, an advanced paramedic, a medic in a fast response car, two incident response officers, a clinical team leader and members of our tactical response unit.

‘We also dispatched a trauma team from London’s Air Ambulance which consisted of a paramedic and a doctor in a car.

‘We treated three people at the scene and took one person to a major trauma centre. Sadly, despite the best efforts of our crews, two people were pronounced dead at the scene.’

Elsewhere in London, a police manhunt continues for a Stratford knifeman who stabbed one woman to death and seriously injured another at a home on Sunday.

And a man in his 30s was recovering after a separate knife attack in Croydon, south London on Monday evening.