A central Queensland coal mine where five workers were seriously injured in a blast last year had continued to operate despite knowledge its gas management system could not cope with production levels, an inquiry has found.

The May 6 explosion at Anglo American’s Grosvenor site, caused by a spontaneous combustion of methane about 400 metres underground, left five miners seriously injured in twin pressure waves one later told the probe were “like a cyclone”. 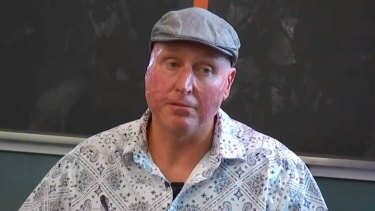 Coal miner Wayne Sellars told an inquiry hearing in April of walking out of the mine with his injured colleagues, despite suffering burns to 70 per cent of his body, in darkness after the first shockwave tripped the power.Credit:Queensland Courts

Although noting in its own records that the gas management strategy in place increased risk through extra oxygen, this assessment was not expect to have been complete until May 31.

When production began it also became apparent that gas emissions were higher than predicted under the mine’s targeted production rate, no limits were imposed.

“This date was long after production commenced, and after the serious accident,” the report said. “Mining should not have been undertaken without first carrying out such a risk assessment.”

The of head Anglo American’s metallurgical coal business, Tyler Mitchelson. told the inquiry a decision had been made to reduce production to 100,000 tonnes each week prior to its start so drainage capacity was not exceeded and that senior management would reduce this further where needed.

“Contrary to Mr Mitchelson’s declared expectation, this did not occur,” the report said. “Producing coal at a rate that consistently exceeds the capacity of the critical control of gas drainage subjects coal mine workers to an unacceptable level of risk.”

The “systemic cause” behind many of the more than two-dozen earlier incidents at the mine, dating back to July 2019, was gas emissions from mine production rate exceeding the capacity to drain them, the report found.

And given the mine’s continual problems with gas management stretching back to 2016, the Mines Inspectorate should have been “more proactive”.

Recommendations of the board included a review of bonuses to ensure they do not discourage safety incident and injury reporting and location trackers on miners while underground.

A Resources Safety and Health Queensland spokesperson said the body would continue to help operators meet their obligations to protect coal miners and give effect to the board’s recommendations about improving risk management.

“We are also committed to ensuring any relevant learnings are applied to other resources operations,” they said.

In a statement, Mr Mitchelson said the company was already acting on the recommendations with an additional $5 million investment into underground mining research.

“We are confident we have already addressed, or will address, these [recommendations] ahead of the restart of longwall mining at Grosvenor Mine later this year,” he said.