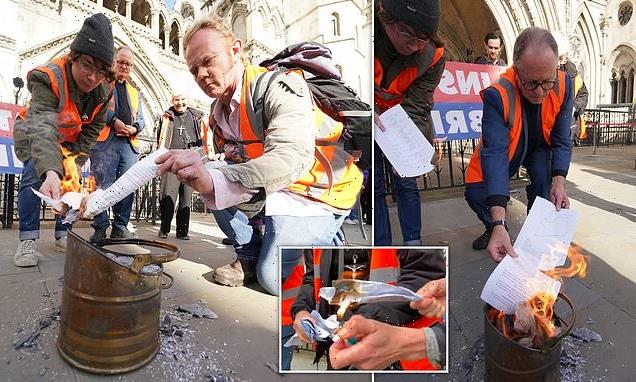 Members of hated eco-mob Insulate Britain have been pictured Tuesday burning their court orders which ban them from blocking the country’s major roads.

The disruptive eco-warriors set fire to paper copies of the injunctions outside the Royal Courts of Justice in central London after a High Court judge extended them until the end of next month.

Members of the Extinction Rebellion offshoot brazenly vowed to continue their disruptive protests, in which they typically glue themselves to the road at busy motorway junctions – despite the risk of unlimited fines and up to two years in jail.

The group has repeatedly blocked major roads, including the M25 and the M4, since September 13, infuriating motorists trying to get to work – including paramedics and ambulances on their way to hospital.

National Highways was granted three injunctions banning the demonstrations on the M25, around the Port of Dover and on major roads around London last month. 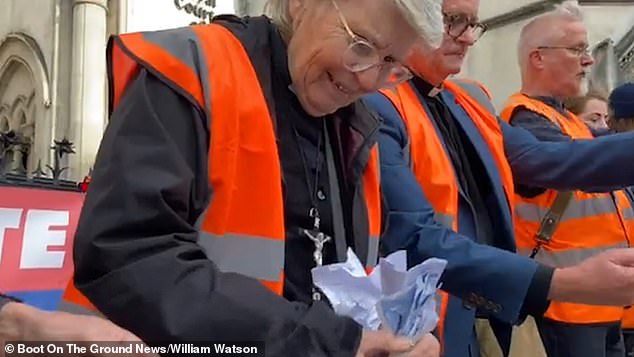 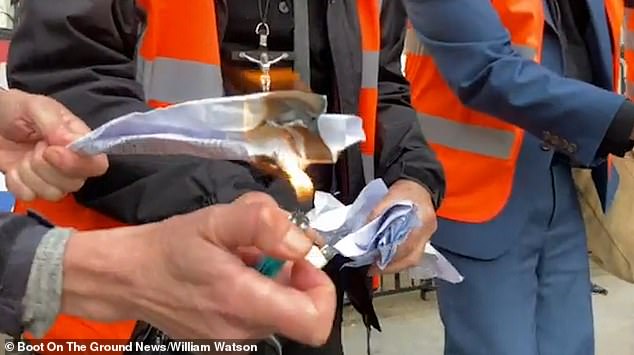 Members of the eco-mob burned the court papers as they vowed to continue their disruptive protests, in which they typically glue themselves to the road at busy motorway junctions

At a second public High Court hearing on Tuesday, the three injunctions were extended until November 30.

He said: ‘They create an immediate threat to life, putting at risk the lives of those protesting and normal motorway users, as well as those reliant on the movement of emergency services vehicles to protect the public and save lives.’

During Tuesday’s hearing Insulate Britain members were given the chance to argue against the injunctions.

Ring leader Liam Norton, 36, told the court: ‘I just want to say publicly Insulate Britain are in the process of trying to uphold the law, the UK Government has a responsibility to keep temperatures below 2C degrees.’ 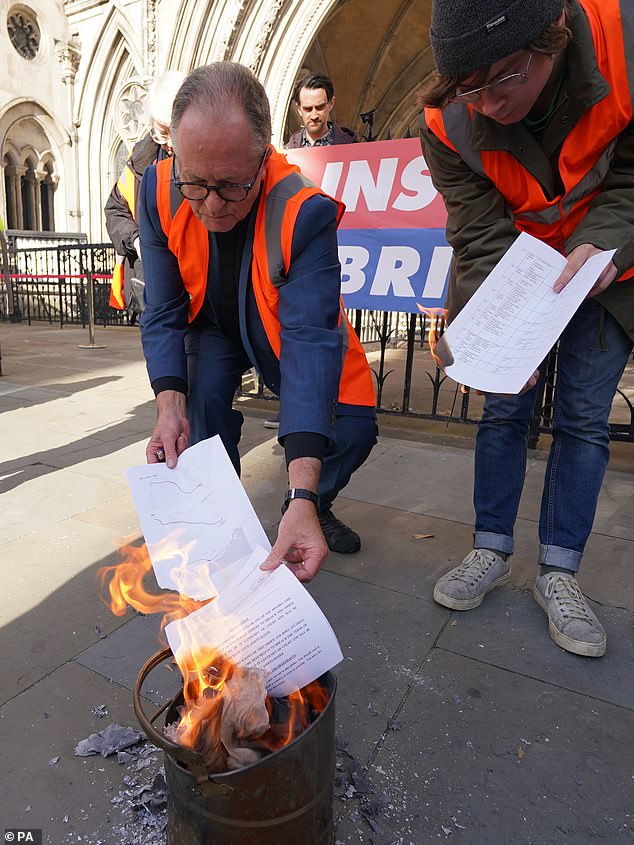 National Highways has been granted three injunctions banning the demonstrations on the M25, around the Port of Dover and on major roads around London (Pictured: Insulate Britain member burns copy of the injunctions)

He added: ‘Boris Johnson should be on trial for treason.’

Mr Norton made headlines weeks ago when he stormed off ITV’s Good Morning Britain after being challenged by host Susanna Reid for not insulating his own home, leading to him being branded a ‘hypocrite’.

Nick Onley, 59, a food bank worker and community musician from London, was one of several Insulate Britain members burning copies of the court orders Tuesday.

He said: ‘The papers that are being burned are the front covers of the injunctions that have been served on us as individuals.

‘It’s a sign of our determination to carry on protesting, to carry on raising this issue until we see some action that we can believe in’.

Breaching a court order can result in a committal for contempt of court, which if proved may be punished with up to two years in prison and an unlimited fine.

According to court documents, 112 people have been served with court orders related to the Insulate Britain protests.

When asked about criticism of the group, Mr Onley added: ‘Doing this protest in the last month is probably the most horrible thing I’ve done in my life.

‘But we feel that we’ve been put in a position where unless protests cause serious disruption they are just not going to be taken any notice of.’

Mr Elvin later indicated that National Highways may ask for a default or summary judgment – legal steps which would mean the case against the protesters is resolved without a trial.

Mr Justice Lavender said that he would extend the three injunctions but was ‘reluctant’ to make orders with no end date.

It comes after the Mail on Sunday revealed how the group want to cause as much chaos as possible in the run-up to the COP26 summit in Glasgow next month, with one ringleader saying it would be the ‘icing on the cake’ if protesters were sent to prison on remand.

The group’s plans were discussed at a ‘non-violence and de-escalation’ training day at St Pancras Church hall in Central London on Saturday. It was led by Extinction Rebellion (XR) veteran David McKenny. 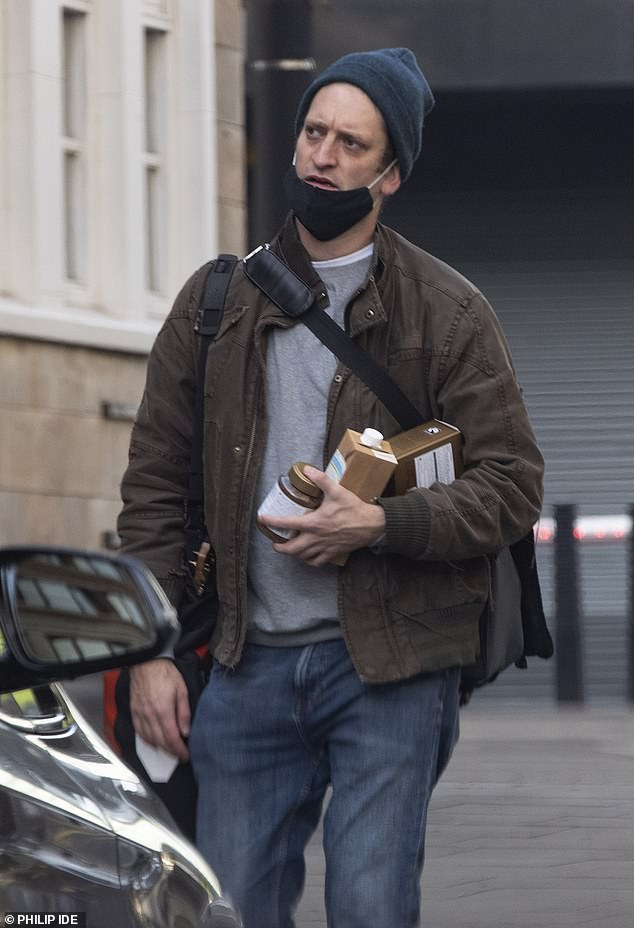 The group’s plans for this week were discussed at a ‘non-violence and de-escalation’ training day at St Pancras Church hall in Central London Saturday. It was led by Extinction Rebellion (XR) veteran David McKenny (pictured) 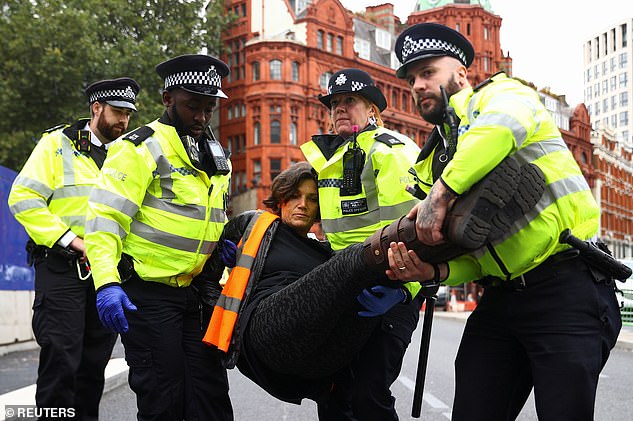 The group want to cause as much chaos as possible in the run-up to the COP26 summit in Glasgow next month, with one ringleader saying it would be the ‘icing on the cake’ if protesters were sent to prison on remand

The 38-year-old musician is no stranger to controversy, having been sentenced to 14 days in prison for contempt of court after he glued himself to the dock at City of London magistrates’ court and filmed his actions.

He was also one of a handful of protesters who confronted Sir David Attenborough, 95, at the height of the pandemic after the conservationist said the actions of XR risked alienating people.

Mr McKenny, who once taught puppeteering at the Royal Northern College of Music, told the crowd of just five: ‘There’s going to be an action on Wednesday and then there’s going to be a press release that goes out that says the Government and police are traitors, absolute traitors.’

Referring to the group’s ultimatum to the Government, he added: ‘You have got ten days to make a meaningful statement on it. If not, we are going to come back and unleash hell.’

He then laughed and backtracked, instead calling it ‘disruption’, adding: ‘That’s the rhetoric we are going to be using.’ He later added: ‘The last week before COP26, we go as hard as possible.’

Recent protests on the M25 and the blockade of the Blackwall Tunnel, linking North and South London, has seen irate drivers confront the activists after being stopped from seeing relatives in hospital or getting to work.

Insulate Britain protesters say they will ‘face aggression or violence with compassion’ and all must sign up to a promise not to ‘press charges on any member of the public who may assault any one of us’.

But at Saturday’s meeting, they then dismissed the concerns of the public, with McKenny saying: ‘All this aggression that’s going on – we’re essentially dealing with people’s inner child.

‘People have said it’s like dealing with a bunch of toddlers on the road – they’re all running around, stomping their feet, acting really angry.’

Ahead of the meeting, an undercover Mail on Sunday reporter was also required to read an 18-page ‘participant pathway document’.

In it, the group declared it was taking ‘non-violent direct action to take on the raw, entrenched power that threatens the near-term future of humanity.’

‘What we are attempting has not happened in the history of this country,’ it boasted.

It added: ‘To have 120 or more people all remanded in prison all at the same time…

‘Our success relies on us building strong bonds over the next couple of months so we have the strength and resolve to keep going back to the motorways, to block again and again, going to the police station, being let out, blocking again, all for as long as it takes.’