Italy has eclipsed Britain to become the nation with the worst coronavirus death toll in Europe.

The country where the continent’s pandemic began and where it rages again today climbed to a total of 65,011 deaths on Monday, compared to Britain’s 64,500.

The virus has flared up in Italy’s south, overwhelming Campania’s medical infrastructure in scenes reminiscent of the carnage in Lombardy in March and April which terrified Europe. 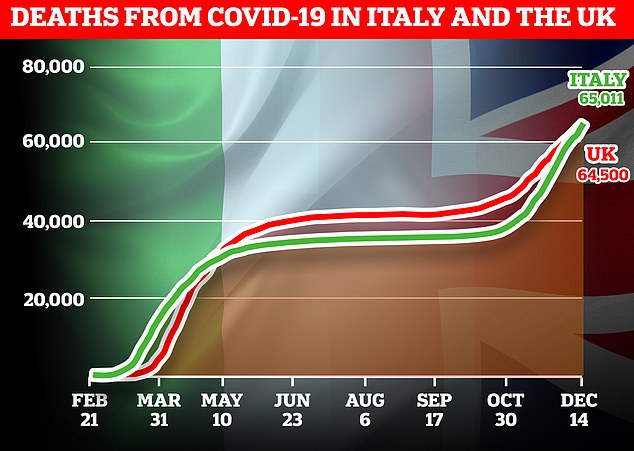 Italy, where the continent’s pandemic began and where it rages again today, climbed to a total of 65,011 deaths on Monday, compared to Britain’s 64,500 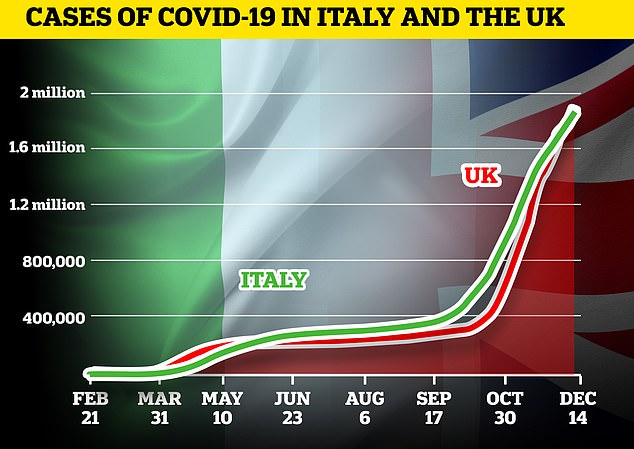 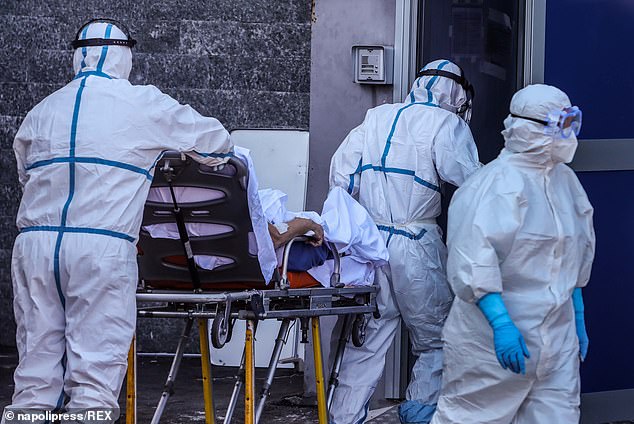 The total has now risen to more than 2,300 as Italy’s overall death toll has overtaken Britain’s.

COUNTRIES IN EUROPE REPORTING THE MOST CASES AND DEATHS PER DAY

The first Western country to suffer significant domestic transmission of the virus in March, Italy won plaudits for seemingly getting its outbreak under control by the summer.

Now questions are once more being asked about why more people die of COVID-19 in Italy than in other wealthy nations.

Of the countries in Europe reporting the highest number of deaths in the last seven days, Italy has the worst figure with a daily average of 629.

Italy is ranked fourth for the countries reporting the most infections per day, with an average of 16,170 cases in the last seven days.

Britain by comparison is reporting an average of 18,815 per day – this has increased in the last two weeks.

Among explanations for Italy’s high death toll are its elderly population; a social structure in which the young often live with the old, exposing them to the virus; an underfunded health system; and a lack of preparedness and organisation.

Germany, a nation much bigger than Italy, has a death toll one-third of Italy’s or Britain’s.

A little more than half of Italy’s known Covid-19 deaths were registered in the first surge.

On Monday, Italy reported another 491 coronavirus deaths and 12,025 new cases.

By far, the region registering the highest number of new infections was the northern region of Veneto.

Italy’s Lombardy region has the highest number of cases and deaths overall.

‘During the summer, when daily cases were low, we failed to recruit more staff and made no plan to reorganise,’ Naples doctor Maurizio Cappiello said.

Doctors hoped that knowledge gained from the initial contagion would help them sharply reduce fatalities in any new outbreaks.

However, as the second wave sweeps over the whole country, Stefano Centani, professor of respiratory illnesses at Milan University, said the death rate remained elevated.

‘Sadly we don’t seem to have made much progress. Perhaps we have even done worse. This will have to be analysed,’ he said.

Prolonged underfunding of the public health service was probably partly to blame, he said.

‘We are paying for 20 years, maybe more, of constant cuts to health resources…When this pandemic exploded all our problems were exposed.’

Speranza also bemoaned spending cuts introduced more than a decade ago to try to help contain a ballooning national debt.

‘In Italy, for 15 years, we have had a rule that blocked spending on personnel at 2004 levels minus 1.4%. This is incredible.

Starting on December 21 and running through to January 6, people in Italy will not be able to travel between regions except for work or urgent reasons such as health problems.

During the holidays themselves, under the nationwide restrictions, Italians cannot leave their towns, as the government seeks to discourage families and friends from gathering in large numbers indoors.