Moscow: Belarusian authorities have presented the detained journalist Raman Pratasevich at a news conference in an attempt to claim he is not being mistreated.

Pratasevich, who was seized last month when authorities forced a Ryanair flight to land in Minsk, said he was being treated well and cooperating with investigators.

Journalists from the BBC walked out of the event, saying it was clear he appeared under duress. 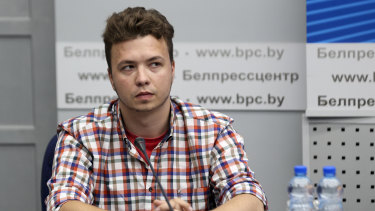 A ‘hostage’: Belarusian dissident journalist Raman Pratasevich at a news conference at the National Press Center of Ministry of Foreign Affairs in Minsk.Credit:AP

Dozhd, a Russian TV channel, chose not to ask Pratasevich any questions because its correspondents could not be sure that he was free to speak.

Tatyana Korovenkova, one of the few independent reporters allowed into the press conference, told Pratasevich that she felt sorry for him. “A lot of people and Belarus and your colleagues feel genuinely sorry for you,” she said.

Franak Viacorka, a senior adviser to Sviatlana Tsikhanouskaya, the Belarusian opposition leader, described Pratasevich as a hostage: “The regime is using him as a trophy.” 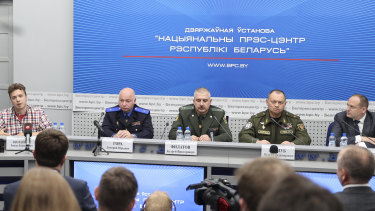 The parents of Pratasevich suspect that their son has been beaten and tortured after they saw a video released by state media, showing him confessing to having orchestrated riots in Belarus. They said it looks like he had a broken nose.

Pratasevich appeared at the press conference a few hours after a Belarusian association of former law enforcement officers cited unnamed sources saying that it was Alexander Lukashenko who had broken Pratasevich’s nose.

Sofya Sapega, Pratasevich’s girlfriend who was arrested alongside him, has been formally charged with “inciting social hatred and enmity”, officials revealed yesterday. The Belarusian authorities flatly denied independent reports that they scrambled a fighter jet to force Pratasevich’s flight to Vilnius to stop in Minsk.

“There was no interception, no forced diversion from the state border or forced landing of the Ryanair plane,” said Igor Golub, air force chief.

Most European countries have since closed their airspace to Belarusian planes and started bypassing Belarus in protest at what they term a “high-jacking”. Pratasevich is the former editor-in-chief of Nexta, a Telegram news channel that covered the huge protests against Lukashenko’s regime following his widely disputed re-election.