Cindy Lorenz took one look at the photograph of the little girl with wild black hair and knew instantly: “That’s my kid.”

But alongside the image of six-year-old Jessie dressed in a pink tracksuit and tutu was a long list of degenerative symptoms that only grew in the 14 years since Lorenz and her husband Gared O’Neill became her foster parents. 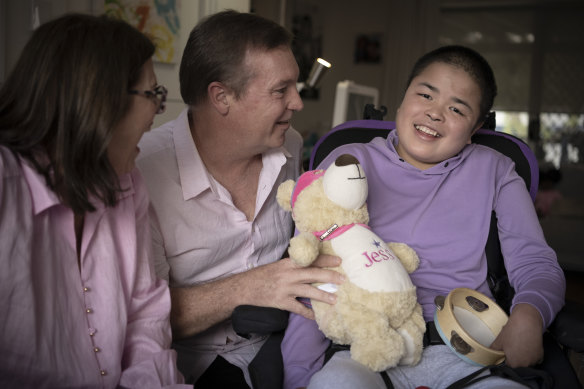 Jessie Mei Mei, 20, with her host parents Cindy Lorenz and Gared O’Neill. Jessie was diagnosed at the age of 4 with Sanfillipo Syndrome, the root cause of her childhood dementia.Credit:Wolter Peeters

Jessie is one of 700,000 people around the world living with childhood dementia. One in 2800 children is born with a disorder that causes the progressive neurodegenerative condition, yet few people know it exists.

“When I speak to people about childhood dementia, almost 99 per cent will say ‘I didn’t know this was a thing’,” said director and chief executive of the Childhood Dementia Initiative Megan Donnell. “The next thing they say is ‘why have I never heard of this?’

“We desperately need people to know that dementia affects kids, that their families are under immense pressure and the health and support systems are not meeting their needs,” Donnell said.

On Thursday, the Childhood Dementia Initiative released its report to prosecute the case for making childhood dementia a healthcare priority. 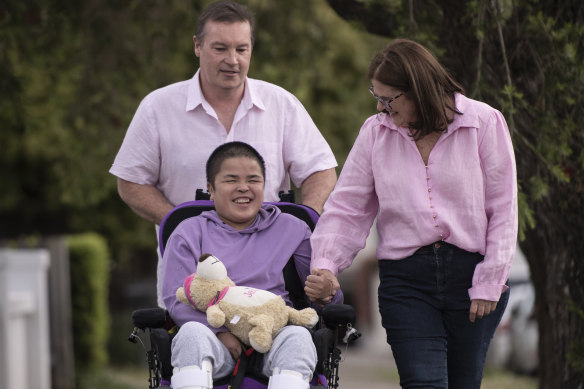 Jessie is a joy to her family, with the ability to smile through her suffering, Cindy Lorenz said.Credit:Wolter Peeters

An estimated 2273 Australians were living with childhood dementia in 2021, and roughly 90 people die with the condition every year, The State of Childhood Dementia report said.

The former federal government allocated $3 million from the Medical Research Future Fund to focus on treatments and therapies for childhood dementia, a sum Donnell says is “a drop in the ocean”.

“Not one of the global policies, action plans, or national strategies established to address dementia recognise children as a subset of the dementia population,” Donnell said.

The more than 70 rare genetic conditions that cause childhood dementia have been studied and treated separately, resulting in fragmented funding, stalled therapeutic advancements and fractured support structures, the report said.

The hallmark of childhood dementia is the progressive brain damage that erodes all the skills a child develops in their short lives. They lose the ability to write, read, talk, walk and play.

“One of the difficulties of childhood dementia is that the disorders that cause it are rare, but the unifying nature of these disorders is that they present in similar ways, which is a progressive loss of neurocognitive function, irrespective of what the underpinning disease is,” said Dr Nicholas Smith, neurologist and Head of Neurology and Clinical Neurophysiology at the Women’s and Children’s Health Network in South Australia.

“Adult dementia is a similarly mixed bag of conditions, albeit collectively more frequent: Alzheimer’s disease, Parkinson’s disease, vascular dementia to name a few. But when you mention the term ‘dementia’ to someone walking down the street they will have an understanding of the disease and some understanding of what patients and families experience and what services are needed for those patients,” he said. “It is critical for childhood dementia to receive that same recognition,” he said.

Jessie was diagnosed at the age of four with San Filippo Syndrome – the root cause of her childhood dementia. When Jessie was eight, she lost the ability to speak. A seizure at 18 robbed her of the ability to walk. When once she could feed herself with a plastic spoon and fork, she now relies on a gastrostomy tube.

“It is heartbreaking watching her fade away,” Lorenz said.

The National Disability Insurance Scheme and charity Variety have helped Jessie’s family acquire mobility equipment, including a wheelchair, special bed and a ceiling hoist system that enables her parents to manoeuvre her around their home in a sling.

But the administrative red tape can lead to maddening delays, Lorenz said.

“We found a walker model that was just right for her … she was so excited – she had a big smile on her face,” Lorenz recalled.

But by the time Jessie received her own walker a year later she could no longer use it.

“It was very upsetting.” Lorenz said. “We don’t have time to wait.”