Manchin is “intentionally sabotaging the president’s agenda, what the American people want, what a majority of us in the Democratic caucus want. Nothing new about this,” Sanders, I-Vt., told ABC “This Week” co-anchor Martha Raddatz. “And the problem was that we continue to talk to Manchin like he was serious. He was not.”

“When Manchin sabotages climate change, this is the future generations what’s going on right now,” Sanders said. “In the West, all over the world, we’re looking at significantly increased — more and more heat waves. You’d have to look at more flooding. This is an existential threat to humanity.”

The rebuke comes after Manchin told fellow Democrats that he wouldn’t vote — at least not right away — for a party-line proposal to address climate change that some lawmakers had been hopeful to pass with their fragile congressional majority.

Instead, Manchin said, he would back a bill that focused solely on health care measures like prescription drug prices.

Since retaking Congress in 2020, Democrats have been trying to pass major legislation on a slate of social issues to make good on President Joe Biden’s campaign promises and give themselves a boost before the November midterms. But Manchin — and Arizona’s Kyrsten Sinema — have repeatedly broken with the rest of the caucus because of political objections, largely derailing those efforts in the 50-50 Senate.

On “This Week,” Sanders vented that the latest development echoed negotiations last year when Manchin also walked away from a broader social spending bill. 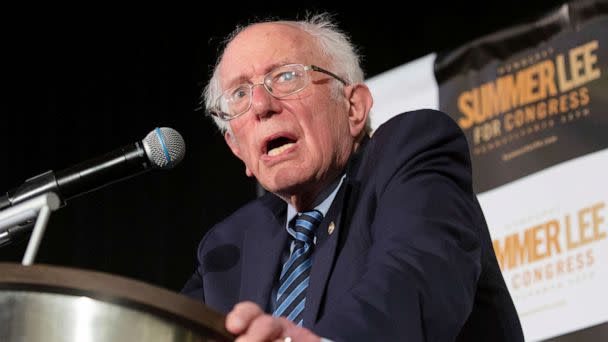 “Same nonsense that Manchin has been talking about for a year,” Sanders told Raddatz when asked about Manchin’s worries over inflation, which hit an annual pace of 9.1 percent last month, a 40-year high. “In my humble opinion, Manchin represents the very wealthiest people in this country, not working families of West Virginia or America.”

In a statement last week, Manchin said he was thinking of everyday costs in opposing the climate and tax proposal.

“Items like chicken, eggs and lunchmeat have increased to new highs, while energy costs rose more than 40% in June with those that can least afford it suffering the most. It is past time we put our country first and end this inflation crisis,” he said.

During his appearance Sunday, Sanders also lamented Biden’s recent trip to Saudi Arabia, saying the president shouldn’t have gone because of Riyadh’s human rights record, including the murder of dissident Jamal Khashoggi, a Washington Post columnist and U.S. permanent resident. 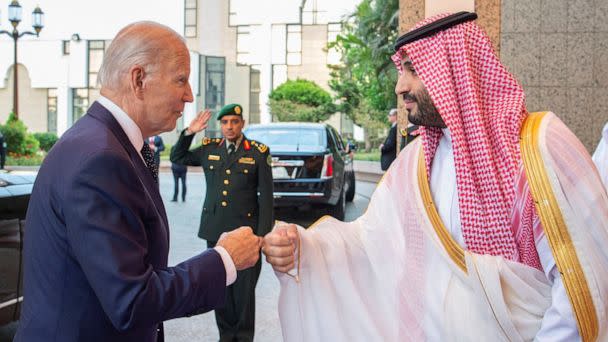 “Should Biden have gone?” Raddatz asked.

“You have a leader of a country who was involved in the murder of a Washington Post journalist. I don’t think that type of government should be rewarded with a visit by the president of the United States,” Sanders said. (The White House says Biden immediately raised Khashoggi’s killing when he met with bin Salman last week.)

“If this country believes in anything, we believe in human rights, we believe in democracy,” Sanders said. “And I just don’t believe that we should be maintaining a warm relationship with a dictatorship like that.”

MORE: Biden pledges US won’t ‘walk away’ from Middle East

Raddatz pressed Sanders on whether Biden’s discussions with bin Salman made sense in light of high gas prices, but Sanders argued that action around what he called corporate greed could make a bigger difference at the pump.

“At the heart of the discussions was oil, and President Biden said the Saudis would take action in the coming weeks. Could that make a difference, and doesn’t that explain why he went? What would you have done?” Raddatz asked.

“One of the things we’ve got to look at is the fact that while Americans are paying $4.50, $4.80 for a gallon of gas, the oil company profits in the last quarter have been extraordinarily high,” he said. “And I happen to believe that we’ve got to tell the oil companies to stop ripping off the American people. And if they don’t, we should impose a windfall profits tax on them.”