London: Boris Johnson and his wife Carrie Johnson have welcomed a baby girl – their second child together and the British Prime Minister’s seventh.

The baby was born at a London hospital early on Thursday morning (local time). 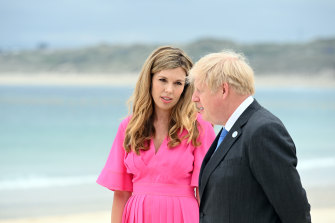 Carrie and Boris Johnson during the G7 Summit In Carbis Bay, England in June.Credit:Getty Images

“Both mother and daughter are doing very well. The couple would like to thank the brilliant NHS maternity team for all their care and support,” a spokeswoman for the couple told the Press Association.

The birth was announced minutes after the Electoral Commission fined Johnson’s Conservative Party £17,800 ($32,846) for failing to accurately report donations used to fund the redecoration of the flat above 11 Downing Street, where the couple live with their son, Wilfred.

The commission’s investigation found that the party failed to fully report a donation of £67,801.72 from Huntswood Associates Limited made in October 2020, most of which was used to fund the flat’s refurbishment.

“As a large and well-resourced political party that employs compliance and finance experts, and that has substantial sums of money going through its accounts, the Conservative Party should have sufficiently robust systems in place to meet its legal reporting requirements,” she said.

Johnson’s seventh child, to this third wife, comes at a time when his premiership is under intense scrutiny following a secret Christmas party held at Number 10 Downing Street at the height of last year’s lockdown.

The Prime Minister’s handling of the scandal has angered his own MPs and coincided with more COVID-19 restrictions, including vaccine passports for mass gatherings and fresh work-from-home orders.

He also floated the prospect of a national conversation on mandatory vaccinations. Around 88 per cent of Britain’s population aged 12 and over has voluntarily received a first dose.

Johnson’s Health Secretary Sajid Javid publicly rebuked the Prime Minister, telling the BBC on Thursday that mandatory vaccinations were “unethical” and would not work.