In a video call with NHS officials in charge of the rollout on Thursday, the 94-year-old monarch suggested it was selfish not to have the jab, telling those with doubts to ‘think about other people rather than themselves’.

During a round of interviews this morning, Mr Buckland described the historic intervention as an ‘altruistic act’ that was ‘hugely important’ to Britain’s Covid fight.

He told LBC: ‘I think anything the Queen says has immense power. She was implying that it was not only good for our own health but that it was also an altruistic act, and that in doing so we all collectively enhance the safety of others.

‘The message of encouragement, information, support for people who have never had a vaccine before is hugely important. I think the Queen again in her usual way has helped reinforce that important message.’

It is highly unusual for the sovereign to take such a firm public stand on contentious issues and her remarks will be seen as a victory for efforts to increase take-up.

More than 18million Britons – one in three adults – have had at least one coronavirus vaccine so far. Another 448,962 were given first doses on Wednesday.

But officials are concerned that vaccine hesitancy could still undermine the rollout and slow down the easing of restrictions. They estimate that around 15 per cent of the population will not take up the offer of a jab, with scepticism highest among minority ethnic groups.

In the unprecedented video message, the Queen said her jab last month ‘didn’t hurt at all’ and had made her ‘feel protected’.

Likening Covid to a plague, she said it was remarkable how quickly the inoculation programme had been put into action, helping ‘so many people’. 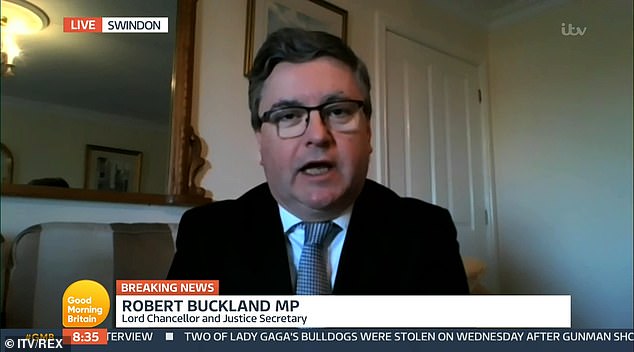 During a round of interviews this morning, Robert Buckland described the historic intervention as an ‘altruistic act’ that was ‘hugely important’ to Britain’s Covid fight 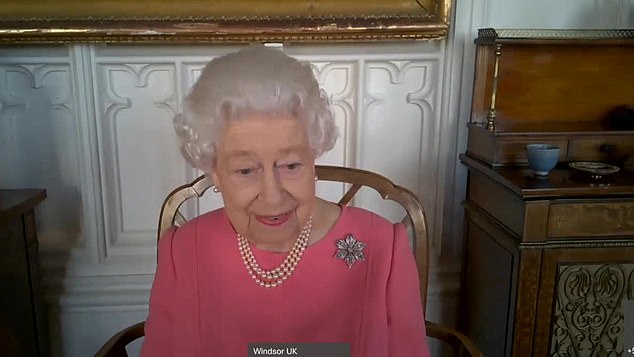 The Queen has made a historic intervention in the coronavirus vaccination drive, suggesting it is selfish not to have the jab

A senior royal source said: ‘It is a passionately held belief that people need to get out there [and get vaccinated] – this is important.’

An NHS vaccine chief said it was an ‘incredibly important vote of confidence’ in the programme.

The NHS has been working with community leaders and church groups to try to alleviate some of these fears with seminars and Q&A sessions.

The Queen was speaking during a WebEx video call with the four ‘senior responsible officers’ leading the deployment of Covid-19 vaccination across England, Scotland, Wales and Northern Ireland.

Plans for a night-time vaccine drive during Ramadan are being drawn up by No10 amid fears uptake among Muslims could plummet during the religious festival.

Officials are concerned that vaccine hesitancy within ethnic minority groups could be even greater during the month-long fast, which lasts from April 12 to May 12.

During Ramadan, Muslims abstain from consuming food and drink from sunrise to sunset every day and some consider taking medication within those hours to be breaking the fast.

However, the British Islamic Medical Association and the majority of Islamic scholars have said getting the Covid vaccine while fasting would be permissible.

The Telegraph reports that Government sources hope to keep some immunisation centres open at night in case there are still some who don’t feel comfortable getting a daytime jab.

There will be added impetus to make sure uptake remains high among Muslims after a major report published today found Pakistani and Bangladeshi people have the highest Covid mortality rates of any ethnic groups in the UK.

Latest estimates show approximately 75 per cent of South Asians over 70 have been vaccinated compared to 90 per cent of elderly white people. Rates are thought to be as low as 60 per cent among black Britons.

It’s thought that a lack of trust in Government, misinformation on social media and communication barriers are behind poorer uptake in the UK’s minority groups.

On April 12, when Ramadan starts, shops, gyms, beer gardens and self-catering holiday homes will reopen and on May 17 pubs and restaurants will get the green light. The PM has set the target of offering a jab to everyone aged over 50 by April 15.

Emily Lawson, who is leading the vaccine deployment programme for the NHS in England, told the monarch: ‘We hope everyone who is offered the vaccine will take it up, because it is our best chance to protect both the people who take up the vaccine, their families and their communities.’

In reply, the Queen suggested it was selfish for people not to have the jab if offered one, saying: ‘Once you’ve had the vaccine you have a feeling of, you know, you’re protected, which is I think very important.

‘And I think the other thing is that it is obviously difficult for people if they’ve never had a vaccine … but they ought to think about other people rather than themselves.’

After the call Dr Lawson said the Queen’s comments were an ‘incredibly important vote of confidence in the programme’.

She added: ‘We just want to make sure we create the conditions where everybody feels able to take up the offer of a vaccination when they’re called. And Her Majesty offering her view on that is a huge boost to our confidence and, I hope, to confidence more broadly in the programme.’

The Prince of Wales, Duke of Cambridge and Duchess of Cornwall have been thanking volunteers and key workers for their efforts in the vaccine rollout. Earlier this week Prince William made a point of saying on the jab: ‘I’d be at the front of the queue if I could, just to prove that it’s OK, but I have to wait my turn.’

The Duchess told volunteers at another vaccination centre: ‘It feels like the first step of freedom, I certainly felt like that [after getting the vaccine]. I hope you’re able to be reunited with your grandchildren, I think we’re all looking forward to that!’

The Countess of Wessex is volunteering as a St John Ambulance volunteer at a vaccination centre. More than 10,000 volunteers have been trained for deployment at 2,500 sites around the UK.

The Queen had been reluctant to publicly confirm she was going to be vaccinated, with officials arguing that it was ‘private medical information’. But she had a change of heart and it was revealed that she and the 99-year-old Duke of Edinburgh had been given their jabs early last month.

The monarch has made only a handful of carefully-worded interventions in government matters during the course of her 69 years as head of state, most notably when she urged people to ‘think very carefully’ ahead of the 2014 Scottish independence vote.

It was later claimed that her comment to a member of public outside church at Balmoral was part of an ‘orchestrated’ plan to persuade people to vote ‘no’. 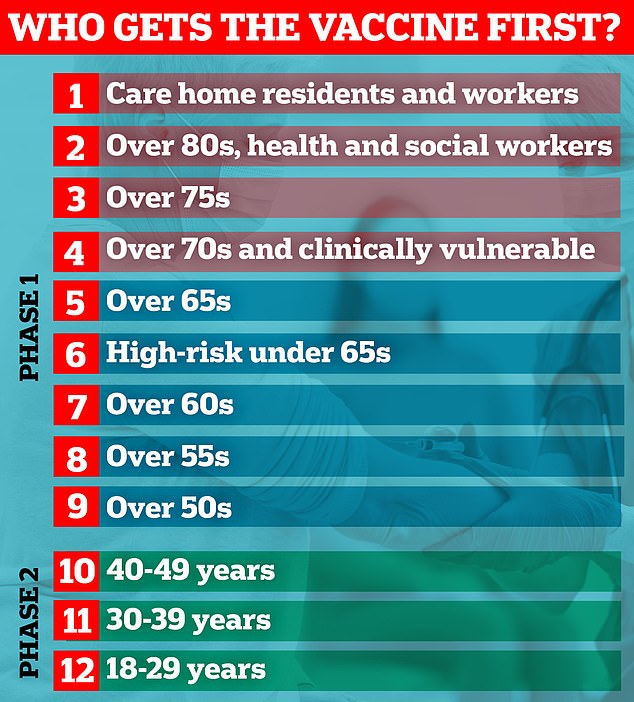 Teachers and police will not be bumped up the Covid vaccine priority list and people in their 40s will be next in line once the NHS has made its way through 32million people in the top nine priority groups, the Government confirmed today.

Ministers confirmed they will follow the ‘age-based rollout’ recommended by experts, taking a decade at a time down to age 18 rather than offering people vaccines based on their job, ethnicity or whether they’re obese.

Trying to offer jabs to key workers such as teachers or police officers first, the JCVI advisory group said, ‘would be more complex to deliver and may slow down the vaccine programme’. Health Secretary Matt Hancock will confirm the update at a 5pm press conference tonight.

Police and teaching unions are outraged at being left out of the next phase, however, with the Metropolitan Police Federation chief Ken Marsh saying he was ‘shocked’ and accusing the Government of ‘creating a super-spreader situation’ with officers unable to follow social distancing while at work. The Association of School and College Leaders’ general secretary, Geoff Barton, told the BBC he was disappointed and jabbing teachers was ‘important’.

More than 18.7million people in the UK have already had at least one dose of a Covid vaccine and Boris Johnson said he aims to have reached everyone in the top nine priority groups by April 15.

In 2019 she also urged people to seek common ground and never lose sight of the ‘bigger picture’ in what was widely seen as a reference to the often vitriolic debate over Brexit in a speech to her local Sandringham Women’s Institute.

A royal source likened this week’s intervention to the speech given by the Queen at the start of the pandemic in which she urged people to stay at home and talked about the need to work together to defeat the virus.

‘In this engagement and the engagements the family have been doing, it is another example of how we are all in it together,’ the insider added. ‘The vaccination programme is clearly the most important thing going on. They wanted to thank the people taking part in it.’

Insiders said the palace was ‘always wary of politics around these things’ but stressed the vaccination programme was ‘about the nation coming together’.

In the video call, Dr Lawson said: ‘To have vaccinated nearly 18million people in the UK is a testament to the strength, the will and the importance the Government, the NHS, all of our partners and our citizens have placed on this vaccination programme.

‘It really embodies the spirit of the NHS and it’s an amazing example of what the service can do when we all pull in the same direction and we work together with partners to deliver.’

Addressing the Queen, she added: ‘I’m wondering what your experience of receiving the vaccine was and whether that was a positive experience from you, and what other feedback you’ve heard?’

The Queen, speaking from Windsor in pearls and salmon-pink dress, replied: ‘Well, as far as I can make out it was quite harmless. It was very quick, and I’ve had lots of letters from people who’ve been very surprised by how easy it was to get the vaccine. And the jab was very … it didn’t hurt at all.’

From today, hundreds of thousands of people on the official shielding list will be asked to come forward for their first dose.

A further ten vaccination sites, including Reading’s Madejski stadium and a theatre in Basildon, Essex, will start administering jabs this week.