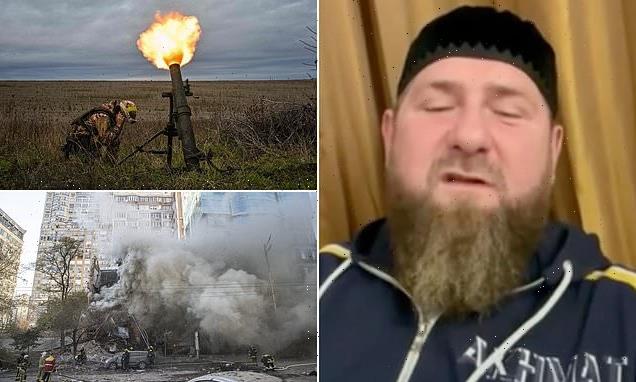 Chechen warlord Ramzan Kadyrov has declared the war in Ukraine to be ‘the Big Jihad’ while urging Russian Muslims to rise up and fight ‘demons’ and the forces of ‘Satanic democracy’.

Kadyrov, one of Putin’s most hardline supporters, ranted against gay people, the transgender, and Western liberals online – saying they have overrun Ukraine, want to destroy Russia, and it is the duty of patriots to take up arms against them.

‘They want to break our Motherland into pieces, humiliate, trample in the dirt and, in the end, defile our faith and culture so that we don’t have any identity and not a single family value,’ he said. ‘I see degradation and Satanism in this.

‘And I’d rather fight it in the bud than let this abomination envelop our Motherland.’

His language was then adopted by the Russian Security Council which last night proclaimed that hundreds of Satanist sects are now spreading across Ukraine and that the country must be ‘completely de-Satanzied’.

It marks a shift in tone from earlier in the war, when Moscow declared it was fighting against fascists and wanted Ukraine to be ‘de-Nazified’. Now, at least according to the Kremlin, they are fighting the Devil. 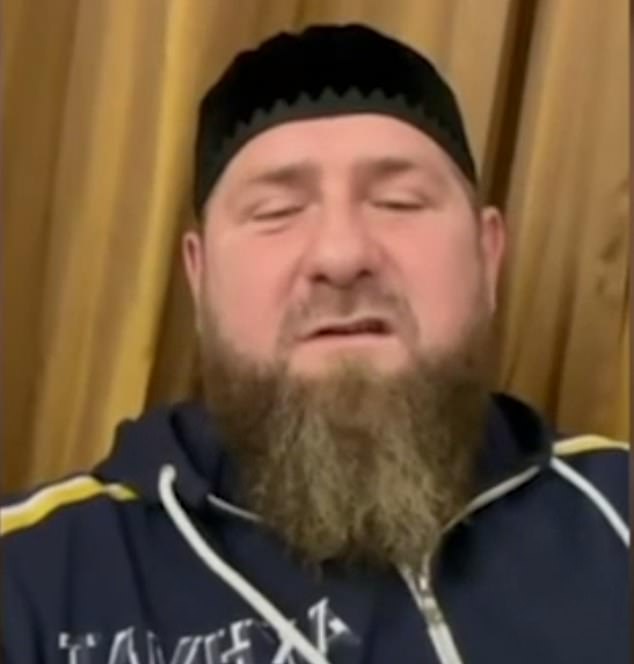 Ramzan Kadyrov, Chechen warlord and Putin hardliner, has ranted against Satanists and demons he claims are fighting in Ukraine – and declared the war ‘the Big Jihad’ 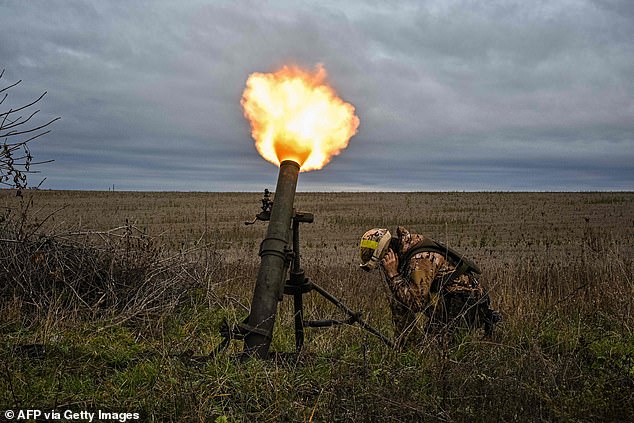 Kadyrov raged: ‘I swear with the Almighty’s name, this is the Big Jihad which we must all take part in.

‘And we will not stop. We will be killing them wherever they are. No matter who is helping them, America or Europe. There is nothing to worry about.

‘They don’t have as much means and forces, they will run out soon. Our ancestors during World War Two had even less.

‘They didn’t have enough to eat, but they won, because they had spirit and belief.’

Kadyrov also promised that anyone signing up to fight in Ukraine would get to kill ‘shaitans’, an Islamic word meaning ‘evil spirit’ or ‘demon’.

‘[The West] want to break our Motherland into pieces, humiliate, trample in the dirt and, in the end, defile our faith and culture so that we don’t have any identity and not a single family value. I use the word “Satanism” for a reason…

‘In the West, Satanism is openly acting against Russia. Satanic democracy is when the rights of atheists are protected, but believers are offended.

‘Or when traditional couples are deprived of children who are transferred to same-sex families. Intentionally same-sex, not by chance.

‘In Europe they have swallowed it. They consider it modern, civilised. The more liberated “below the belt” topic, the better for them.

‘And I see degradation and Satanism in this. And I’d rather fight it in the bud than let this abomination envelop our Motherland here.

‘Today the state and the president [Putin] need us.’

Kadyrov is a Putin stooge appointed to rule over Chechnya with an iron fist after Vladimir crushed an uprising there as one of his first acts as president.

He has typically been loyal to his paymaster, but as the war in Ukraine has lurched from disaster to disaster he has become more openly critical.

Though he has not attacked Putin directly, Kadyrov has railed against Russia’s commanders and insisted he could have achieved victory by now.

Another Putin loyalist who has turned critical in recent weeks is Vladimir Solovyov, a state TV propagandist, who last night called for Ukraine’s second-largest city to be wiped ‘off the face of the f***ing earth.’

Kharkiv – a major hub for Russia diaspora before the war broke out – is ‘obviously Ukraine’s main logistic and supply centre’, according to Solovyov.

‘Warn the civilians, tell them “You’ve got 24 hours, 48 hours [to leave]”… After that we begin to destroy the city block by block.

‘The same goes for the threat [to] Kherson. Where’s the threat coming from. Mykolaiv? Then destroy Mykolaiv. It’s simple and clear.’

Talk of ‘de-Satanizing’ Ukraine comes after Putin himself railed against the forces of evil he claimed were arrayed against him during a speech annexing occupied regions of the country to Russia.

Hew said: ‘Do we want to have, here, in our country, in Russia, instead of mom and dad, to be a “parent number one”, “number two”, “number three”. 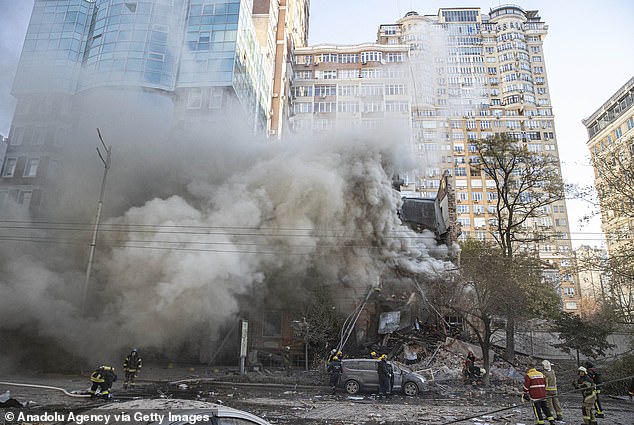 Firefighters conduct work in a destroyed building after Russian attacks in Kyiv, Ukraine

‘Do we really want perversions that lead to degradation and extinction to be imposed on children in our schools from the primary grades?

‘To be drummed into them that there are supposedly other genders besides women and men, and to be offered a gender reassignment operation?

‘Do we want all this for our country and our children? For us, all this is unacceptable, we have a different, our own future…

‘Such a complete denial of man, the overthrow of faith and traditional values, the suppression of freedom acquires the features of a ‘reverse religion’ – outright Satanism.’

Putin’s rhetoric has become increasingly unhinged as he loses the war in Ukraine.

What was supposed to be a days-long invasion to re-take control of the country – mirroring his 2014 annexation of Crimea – has turned into an eight-month war.

Russia’s army has been given a mauling at the hands of Ukraine, which is increasingly being armed with state-of-the-art Western weaponry. 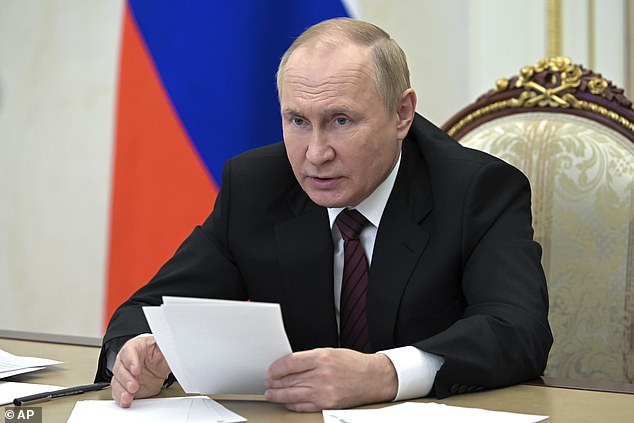 Putin’s forces have virtually stopped advancing having achieved none of his war aims, and are instead struggling to hold on to the territory they already hold.

To help, Vladimir has been forced to conscript 300,000 men into the military to plug holes on the frontline and has declared martial law across occupied Ukraine and in border regions of Russia.

But Ukraine continues to advance. Troops are currently pushing east into Luhansk province from Kharkiv – which was almost-totally recaptured last month – and south towards Kherson.

Sergei Surovikin, Putin’s top man in Ukraine, has floated the possibility of a retreat from the southern city which is also the capital of a province Putin annexed.

President Zelensky has vowed to continue fighting until all Ukrainian territory is back under Kyiv’s control.