Australia's three biggest states are calling for major changes to NAPLAN tests, including moving it from year 9 to year 10, holding it at the beginning of the school year and adding a test of critical and creative thinking in STEM subjects.

They also want to rebrand the tests, and overhaul the often-criticised writing component in which student performance has decreased almost every year since the test began. But they stopped short of calling for an end to standardised testing.

Education ministers from NSW, Queensland, Victoria and the ACT commissioned the report last year, saying the test needed improving. But the review and its recommendations are not supported by the federal government, which mandates NAPLAN as a condition of its school funding. 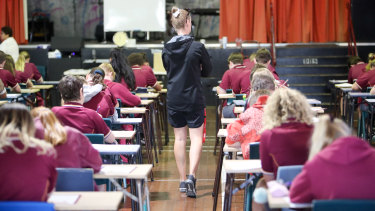 NSW Education Minister Sarah Mitchell said the disruption caused by COVID-19 and the cancellation of this year’s NAPLAN provided an opportunity for reform.

“What students and their teachers need is a diagnostic tool that captures the breadth of a student’s ability, measures student growth and provides systemic and individual results back quickly,” she said.

The review found there was higher absenteeism and lower engagement in year 9 than in other years, but the assessment could be helpful for year 10 students, who were more mature and facing important choices about their subjects for the HSC.

It should be held earlier than May to establish students’ starting point for the year's learning, and results should be available within a week.

The review also suggested the scope of tests be widened beyond literacy and numeracy to include a test of critical and creative thinking in STEM for years 5, 7 and 10, which would replace the three-yearly science literacy survey.

The test should also be rebranded as Australian National Standardised Assessments (ANSA), the review said.

The writing component attracted particular attention, with the review saying schools were unhappy with the prompts (which direct students to write about a subject) and the marking criteria. There were also concerns it led to formulaic writing.

The experts, led by Professor Barry McGaw, suggested it be withdrawn while a new format was developed.

The report also called on states to investigate high absenteeism. “There are numbers of students who are simply absent on the days of testing to an extent that exceeds those missing through exemptions,” it said.

“Getting all states and territories to transition to NAPLAN online remains our government’s priority,” he said. “Changing the name is not.

“Rather than focus our energies on destroying the only national test that provides evidence of how our students are progressing, we should be concentrating our energy on improving standards.”

Craig Petersen, head of the Secondary Principals Council, said educators were unhappy with NAPLAN. “Something needs to change,” he said. “I can see why they would move it to year 10. As long as schools get results back in a timely manner, [moving it to the beginning of the school year] may be useful.

“The overhaul of writing is absolutely welcomed, it’s been problematic from the word go.”