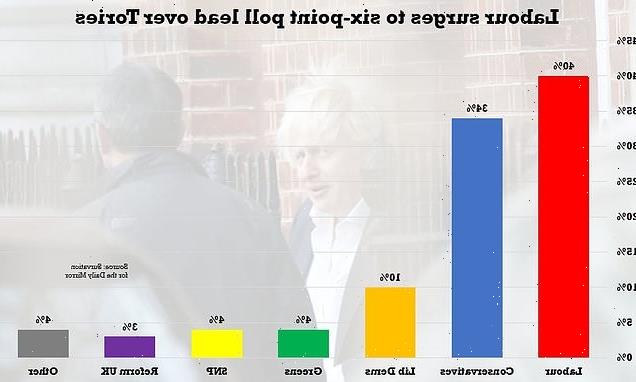 Labour has surged into a six-point poll lead over Boris Johnson’s shell-shocked Tories after a week of crisis in Downing Street.

The Conservatives fell two points to 34 per cent in a poll today amid widespread fury at Covid rule-busting parties last Christmas.

Labour has risen a point to 40 per cent according to the Survation poll for the Daily Mirror, carried out today and yesterday.

Support for the opposition is now at the highest level the pollster has recorded since Boris Johnson took power in 2019.

The crushing poll comes as the PM faces attacks on multiple fronts.

He is under enormous pressure over the alleged parties last December and is facing an enormous backbench rebellion over attempts to tighten Covid restrictions again.

He is also facing accusations of lying over what he new about funding for a lavish refurbishment of his plush family flat in Downing Street.

On top of that, Mr Johnson also became a father again today after his wife Carrie gave birth to a girl, their second child together. 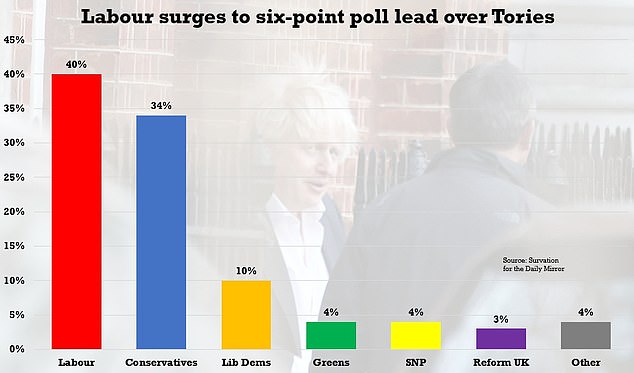 The Conservatives fell two points to 34 per cent in a poll today amid widespread fury at Covid rule-busting parties last Christmas. 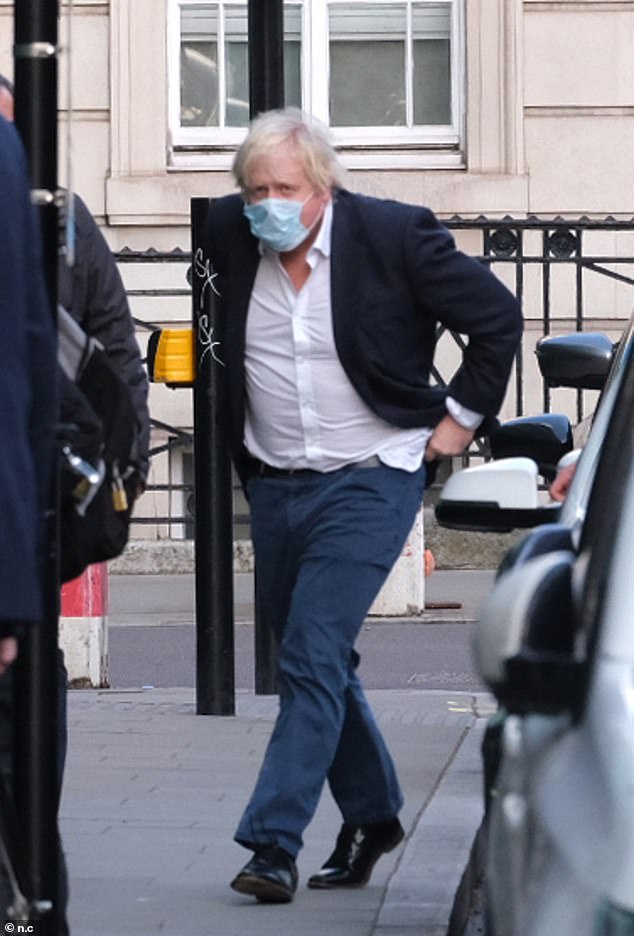 Support for the opposition is now at the highest level the pollster has recorded since Boris Johnson took power in 2019.

Boris Johnson is back on fatherly duties today as a series of crises engulfed No 10 while his wife Carrie gave birth to his at least seventh child today – a baby girl.

Mr Johnson has also revealed that he will take some time off work – but not two weeks of paternity leave – despite the turmoil triggered by launching ‘Plan B’ on Omicron and new allegations he lied to Lord Geidt, his new adviser on ministerial standards, about the donor-funded refurbishment of his Downing Street flat including its £840-a-roll gold wallpaper.

The furore over Christmas parties at No 10 also got worse for the PM today as the probe into alleged Covid rule-busting parties was widened to include another festive celebration and a reported staff leaving do where the PM is alleged to have given a speech.

Hours after rebel Tories called on him to resign, Boris and Carrie walked into a central London NHS hospital at 7.40am this morning – around two hours after police officers turned up to secure the site ahead of their arrival, MailOnline can reveal.

A masked Mrs Johnson, 33, was accompanied into a side entrance by a bodyguard carrying an overnight bag. Her husband, 57, wearing a mask and a trademark wooly hat, was flanked by two policemen as he followed her in carrying a suitcase and what appeared to be a bluetooth speaker.

The baby girl, a younger sister to their son Wilf, one, was born within a couple of hours with Mr Johnson at his third wife’s side throughout the labour and birth. The PM returned to Downing Street at lunchtime after leaving the maternity ward at around 11.45am. He later returned at 3pm with his hair even more ruffled than usual, suggesting he may have caught up on some sleep.

In a statement the couple said: ‘The Prime Minister and Mrs Johnson are delighted to announce the birth of a healthy baby girl at a London hospital earlier today. Both mother and daughter are doing very well. The couple would like to thank the brilliant NHS maternity team for all their care and support.’

The Prime Minister will not take two weeks of paternity leave, his spokesman said, but added the father-of-seven will ‘take some time with his family’ and ‘balance that’ with his responsibilities including his daily red boxes and PMQs next week.

It is not the first dismal poll this week for the PM. Labour also had a four-point lead in the Redfield & Wilton poll, the largest since the 2019 general election.

The scale of the damage to the Tories from the partying revelations, which followed the sleaze row, has been underlined with the poll showing 63 per cent of voters think the PM should resign.

Mr Johnson is struggling to contain a Tory revolt today amid fury at ‘non-sensical’ new Covid restrictions and his handling of the No10 Christmas party debacle.

The PM dramatically triggered ‘Plan B’ measures to control the rampant Omicron strain at a press conference last night, with fears that infections are now doubling every few days and the NHS could be crippled.

Millions of office staff will be urged to work from home from Monday, while masks will be required in theatres and cinemas, and Covid passports are being introduced for nightclubs and large venues.

But Mr Johnson stressed that office Christmas parties should go ahead, sparking derision from critics. Desperate businesses have complained that the differing restrictions for venues ‘don’t make any sense’.

Dozens of Conservative MPs are now threatening to rebel against the measures when a Commons vote is held next week – leaving the PM facing having to rely on Labour support to get them through.

Ringleaders have told MailOnline that it will be the biggest mutiny yet, with at least 60 expected to defy the government whip.

Backbencher Marcus Fysh said today that the latest curbs are an ‘utter disgrace’, while former chief whip Mark Harper has questioned whether the government has the moral authority to impose the limits given the row over rules being flouted in Downing Street.

At the same time, the PM was accused of lying about his knowledge of funding for a lavish renovation of his Downing Street flat.

The Conservatives have been fined £17,800 by the Electoral Commission for failing to register a five-figure cash donation from businessman and Tory peer Lord Brownlow in October last year.

The probe revealed that the payment of £52,000 connected to redecorating the No11 apartment was kept off the books, with worried staff told ‘don’t worry’.

But the investigation also suggested Mr Johnson could have been aware the cash was from Lord Brownlow and his firm Huntwood Associates in November last year.

It also showed that the PM successfully tapped him up via WhatsApp for another £60,000. In total the Tory peer gave £112,549.12 towards the renovation of the private flat.

However, in evidence to his adviser on ministerial standards Lord Geidt earlier this year, No10 said the PM told him he was unaware of the source of the money until February.

The peer’s own probe cleared Mr Johnson of wrongdoing, saying there was ‘no evidence that the Prime Minister had been informed by Lord Brownlow that he had personally settled the total costs’.