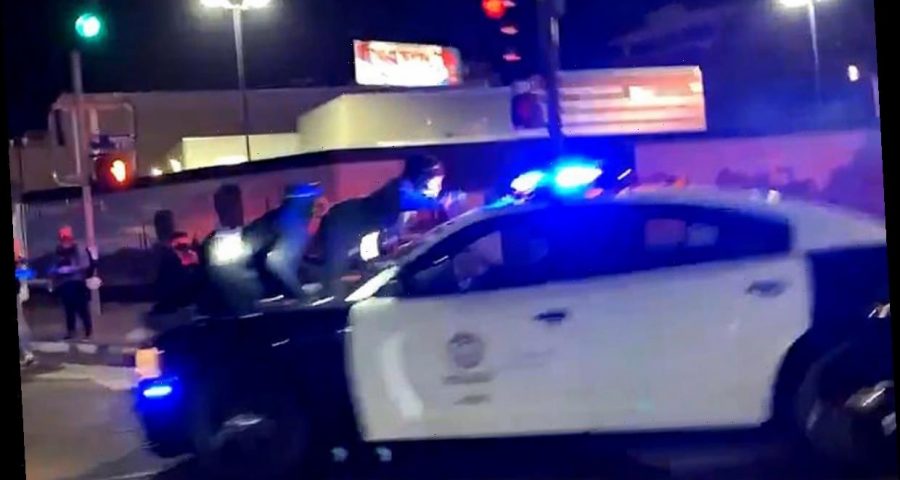 SHOCKING video shows an LAPD patrol car ramming two protesters as demos on the anniversary of the Breonna Taylor shooting turned violent across the US last night.

Riots cops had stand-offs with activists in Los Angeles and Louisville, while in New York a man was hurt by flying glass as thugs smashed a restaurant window. 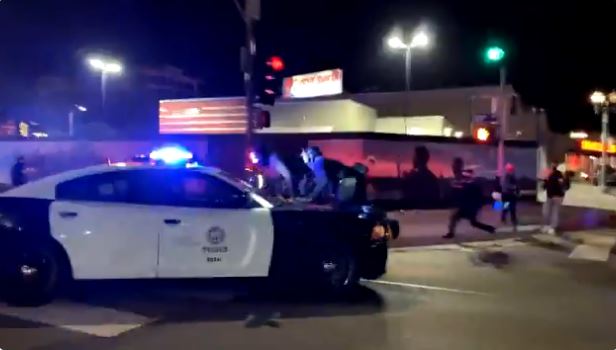 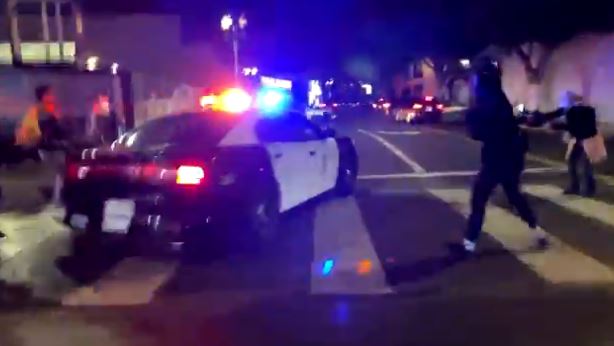 Protesters also marched in several other cities including Atlanta, Washington, Portland and Seattle to mark the anniversary of Breonna Taylor's death.

The emergency medical technician, 26, was shot dead by police in a bungled raid on her home in Louisville, Kentucky, on March 13 last year.

Hundreds of activists took to the streets last night in Los Angeles, where two people were seen smashing a police squad car with its siren blaring.

Video shared on social media shows the men beating the hood on a road in Hollywood.

The cop car then started to move slowly with the men still smashing the hood, then suddenly accelerated forward throwing the men onto the road.

"LAPD just ran over two protesters at the Hollywood Breonna Taylor march," one activist stated beneath a video of the incident. 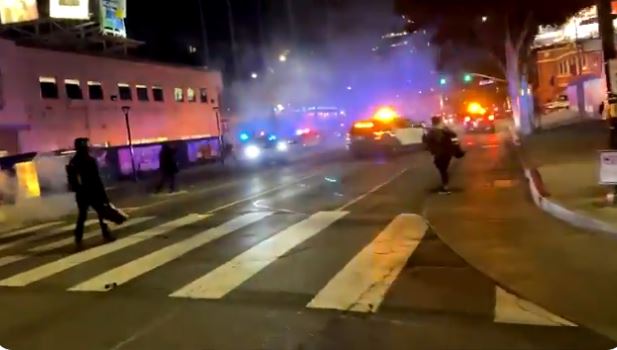 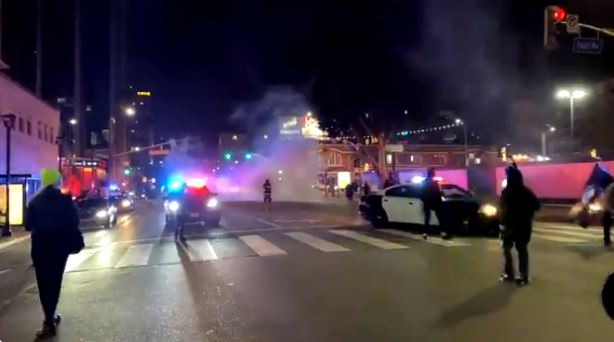 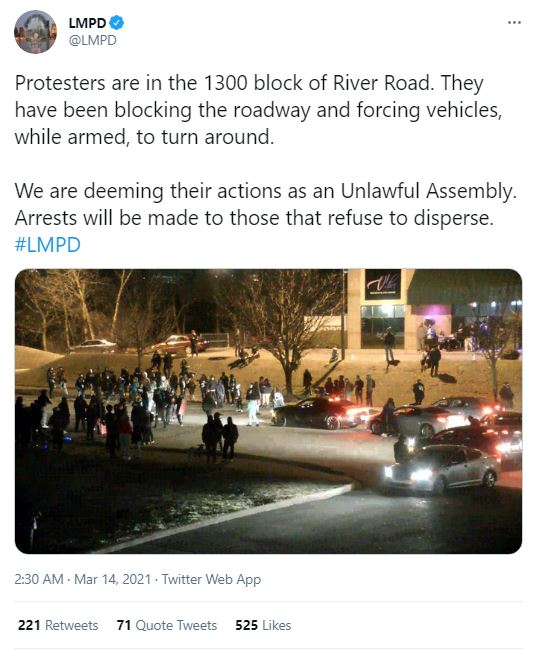 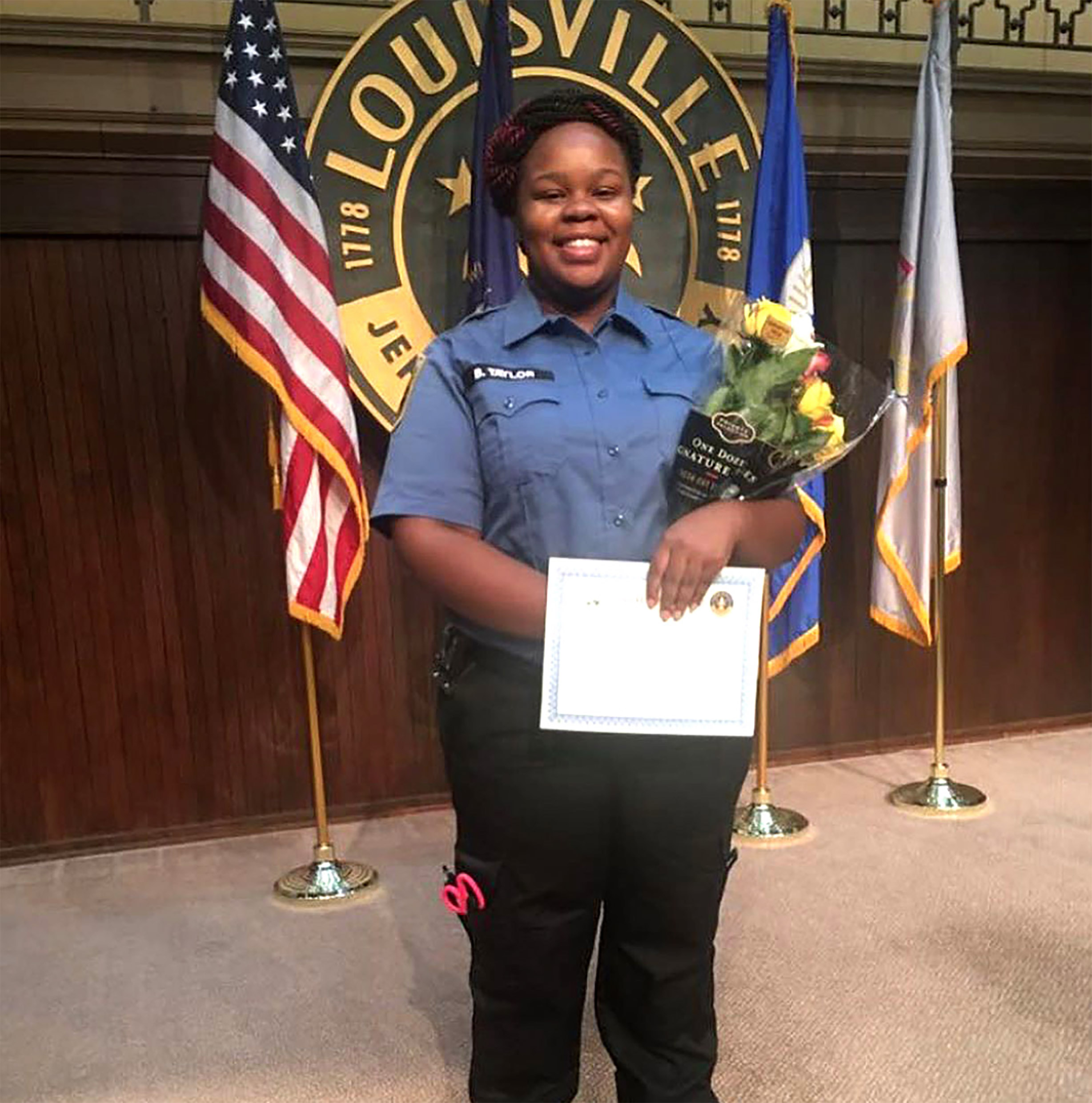 Other footage showed ranks of police in riot gear blocking an intersection as smoke from flares filled the Hollywood street.

Another clip appeared to show LAPD officers firing non-lethal rounds from a shotgun, and clubbing protesters with batons.

Several businesses in the Hollywood area were reportedly vandalized during the unrest.

Meanwhile in Breonna's home town Louisville, armed protesters blocked roads to all traffic in a stand-off with cops.

City police tweeted: "They have been blocking the roadway and forcing vehicles, while armed, to turn around.

"We are deeming their actions as an Unlawful Assembly. Arrests will be made to those that refuse to disperse."

In Seattle, police blocked streets and were pictured pushing a crowd forward into the downtown area.

And in Portland, Oregon, there was a heavy police presence as hundreds of demonstrators gathered outside the federal courthouse.

The city has been on high alert following Antifa riots earlier this week, but there were no reports of violence last night.

There were also largely peaceful demos in Washington DC and in New York, where protesters lay on the ground in Times Square.

But some went on the rampage and attacked a diner on Ninth Avenue in Midtown Manhattan.

One thug was seen swinging an object at the plexiglass window of the outdoor dining area at Dalton’s Bar & Grill, smashing a huge hole.

Police tweeted a photo of cuts on one customer's face.

"There was nothing peaceful about the protest. It looked like Black Lives Matter," one employee told The New York Post.

"I saw a man screaming and banging on the glass. It happened so fast." 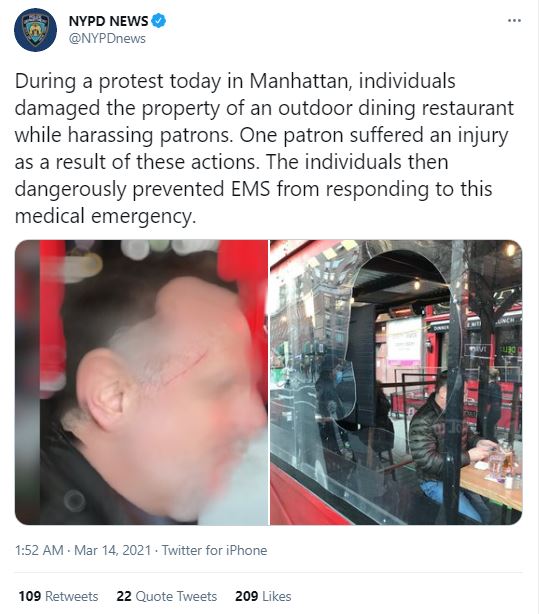 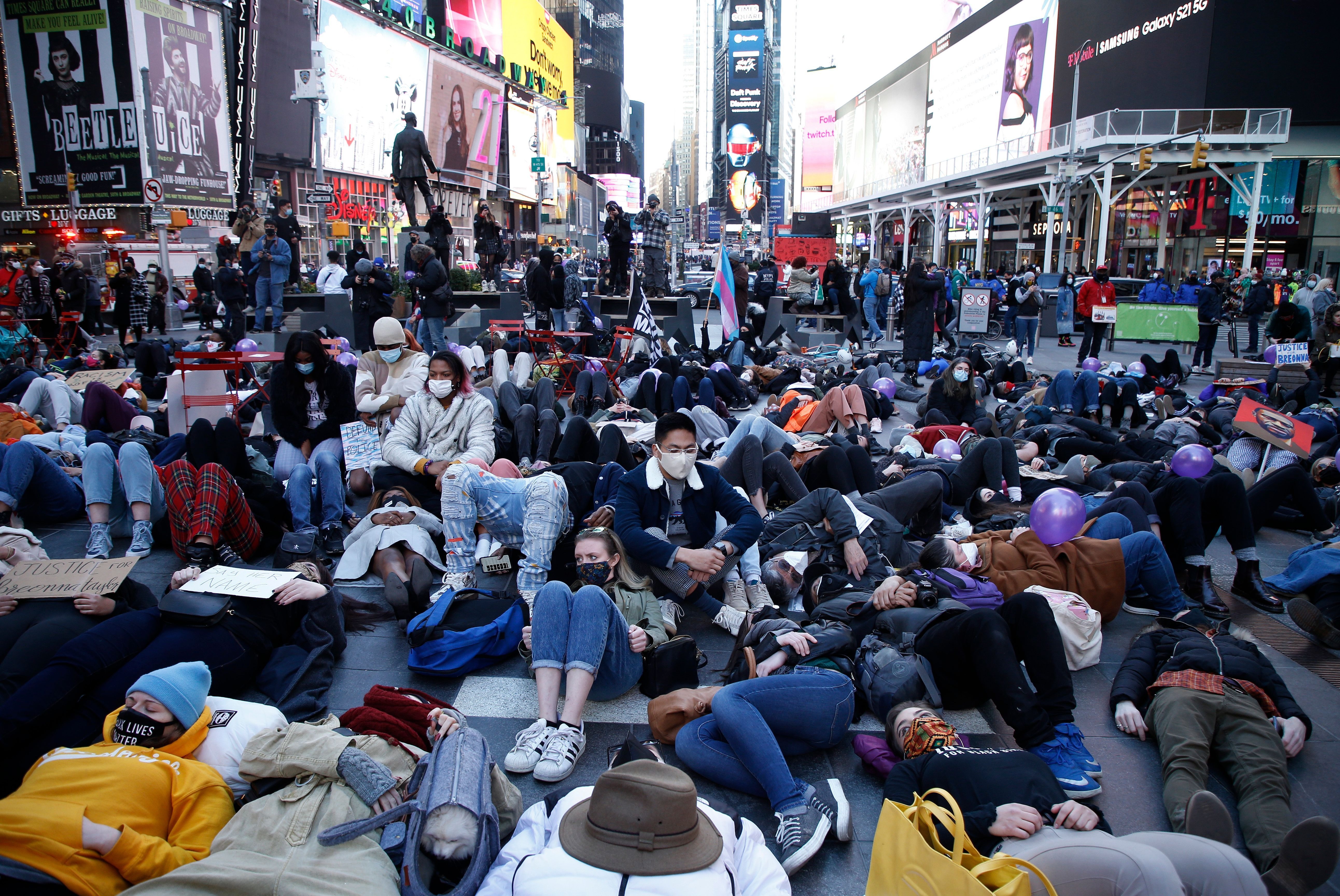 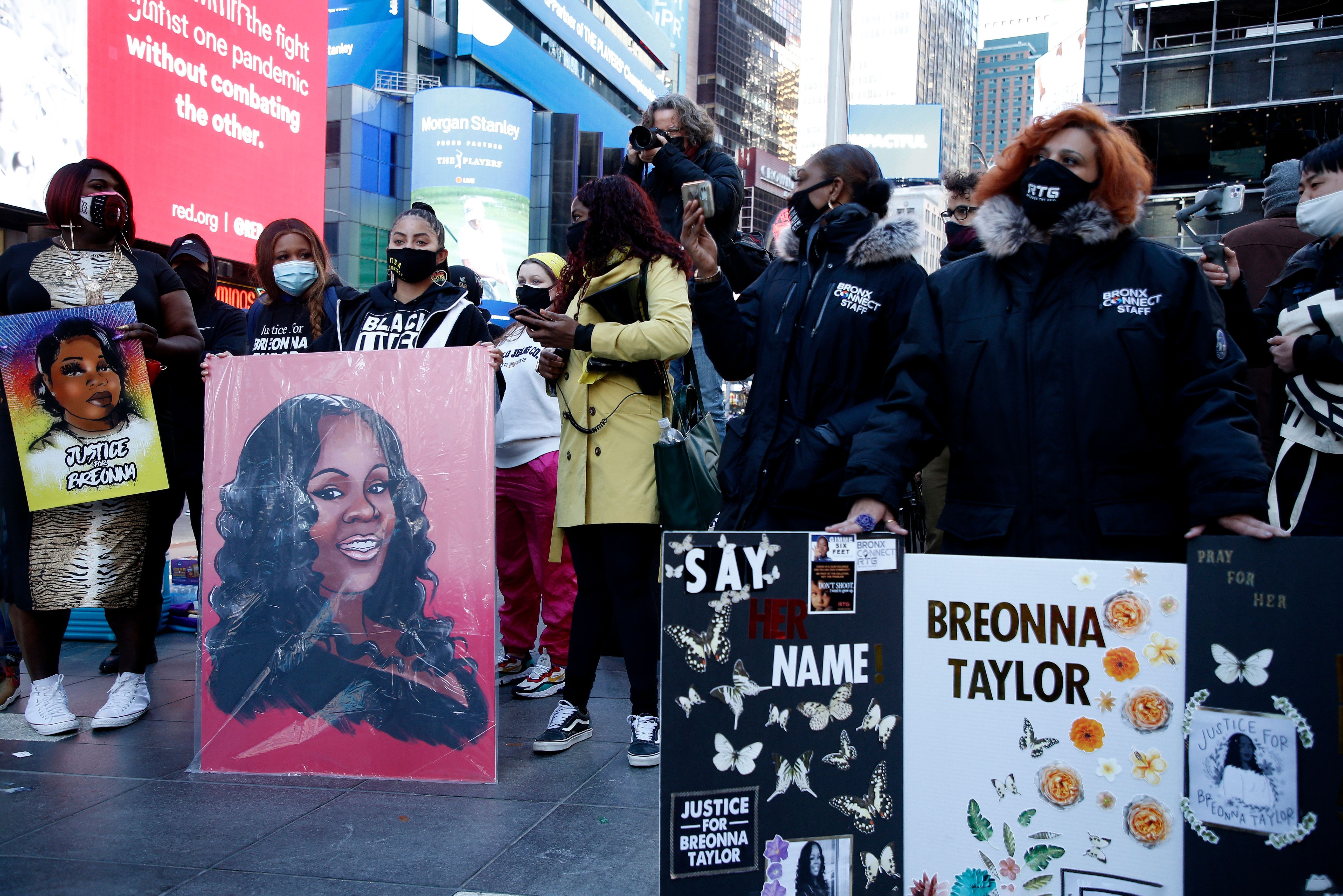 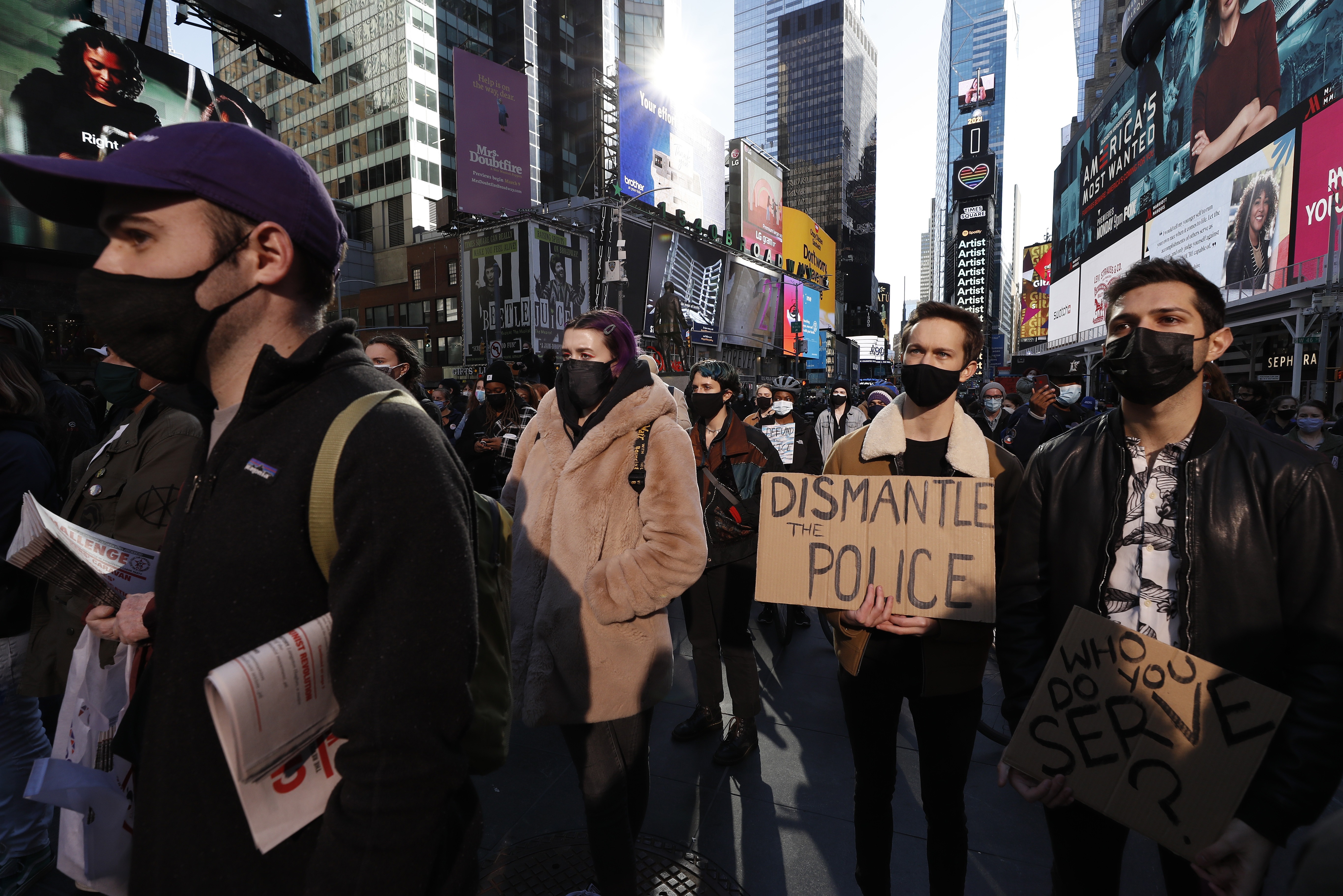 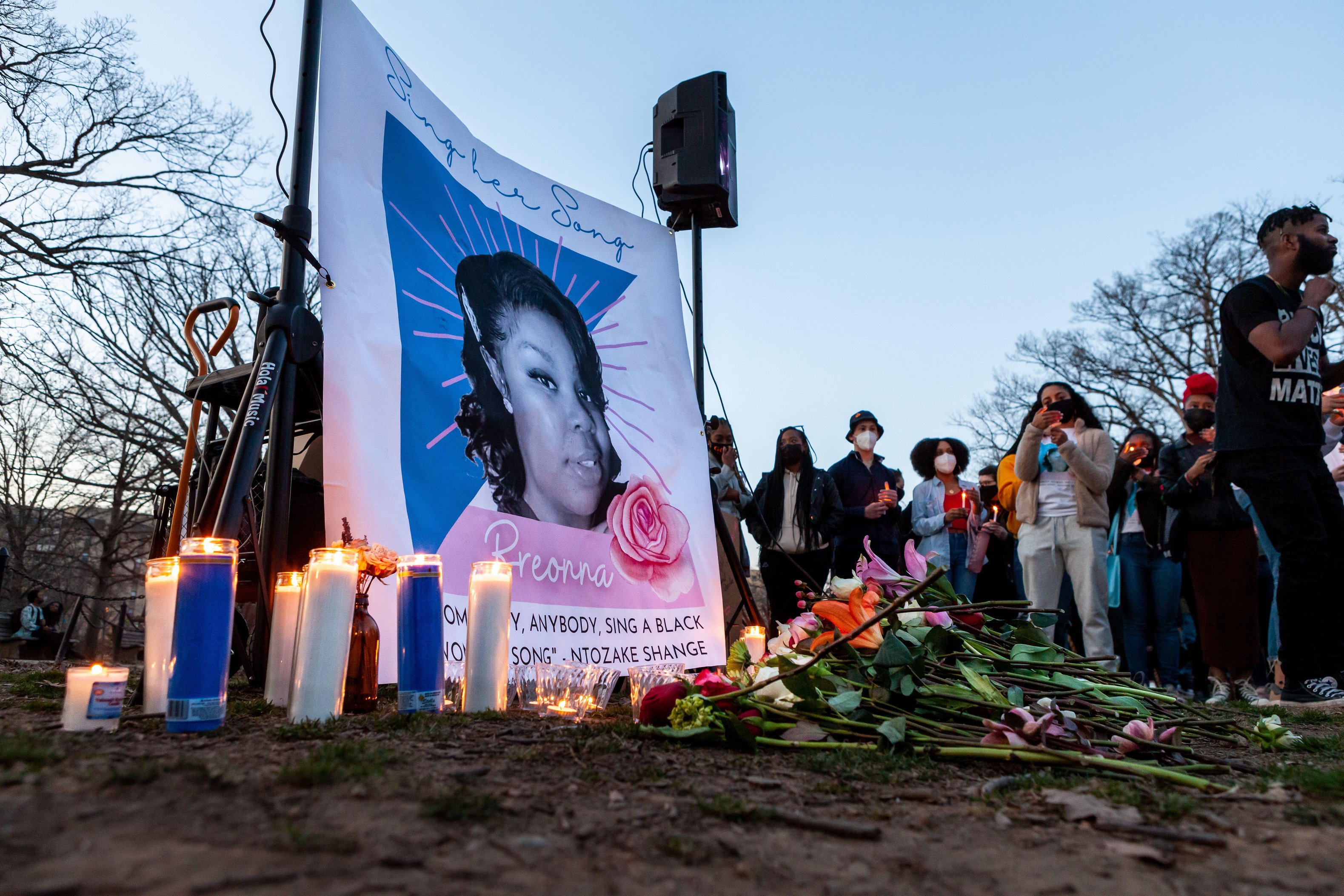 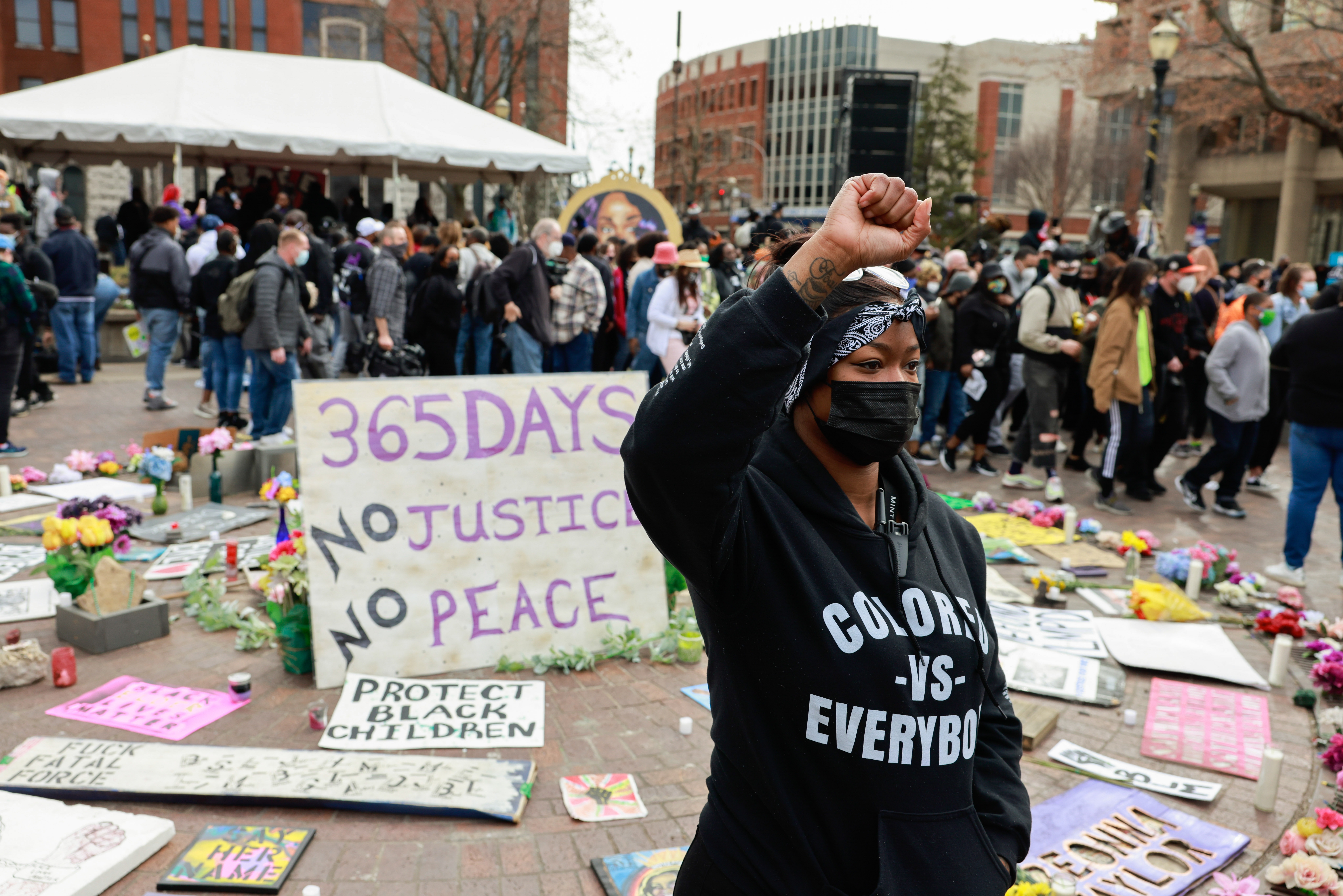 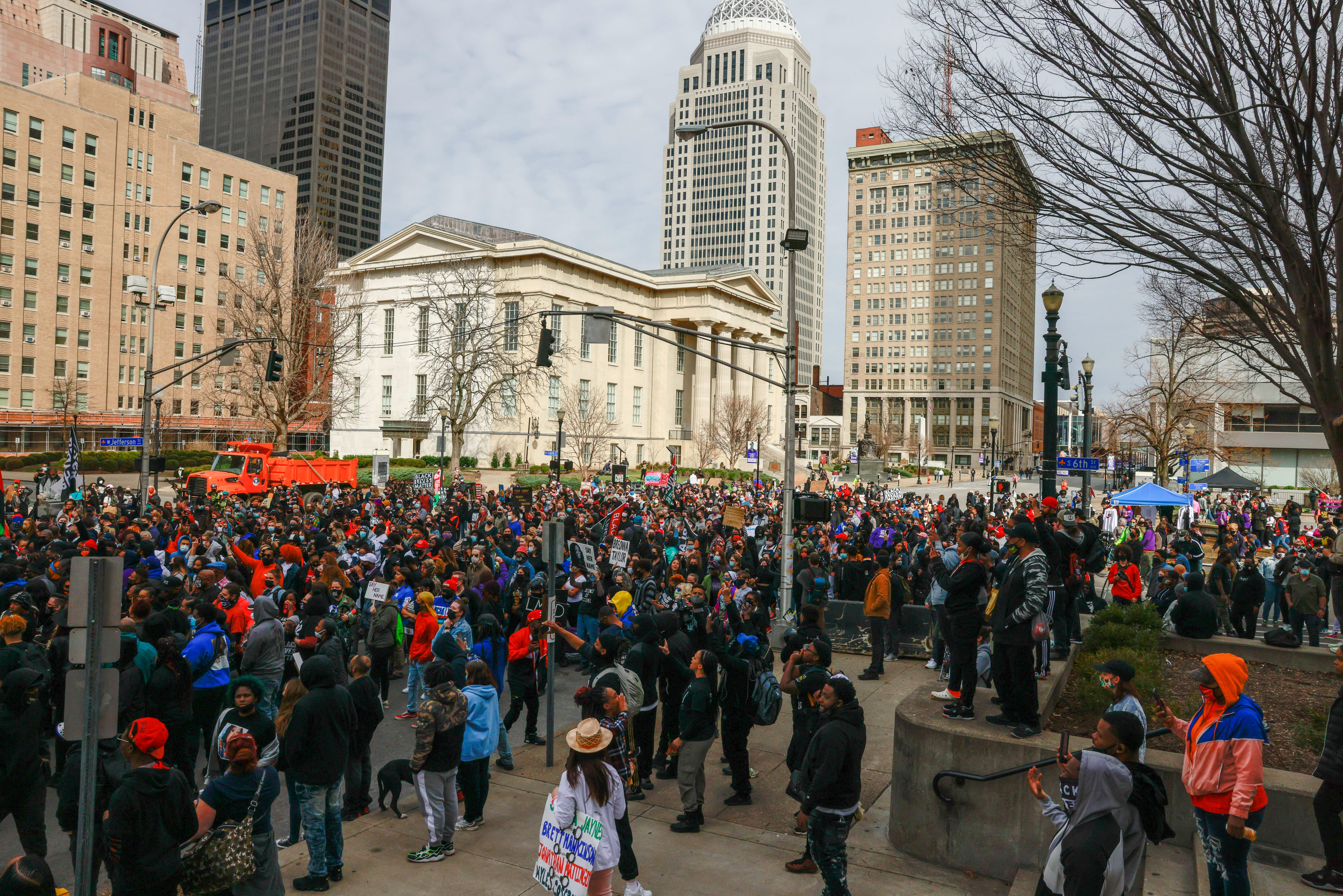 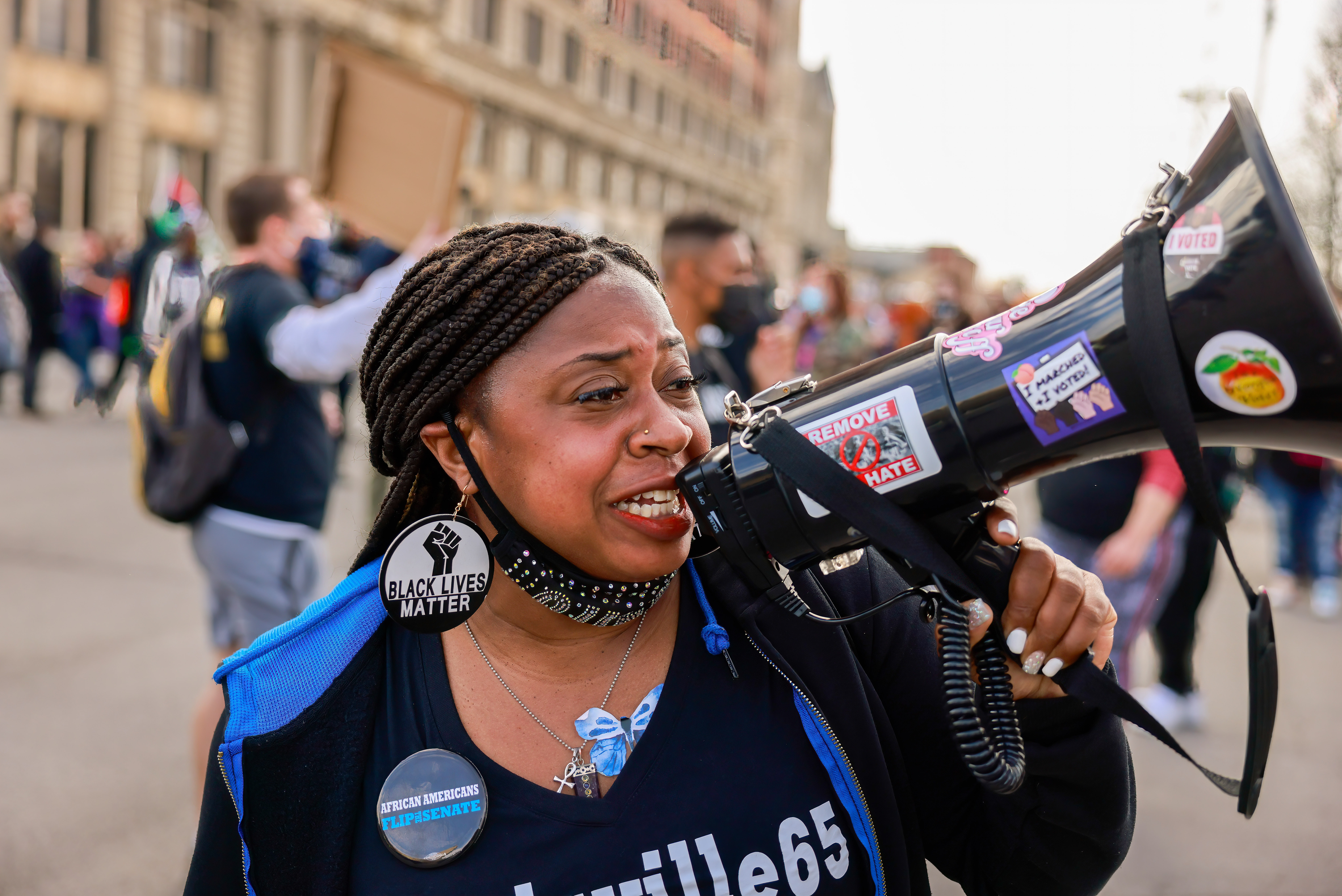 Hundreds demanded homicide charges be brought against the police officers who shot her.

Breonna was killed in a hail of bullets after officers stormed into her apartment looking for an alleged drug dealer who did not live there.

In September, a grand jury controversially ruled no one should be prosecuted over her death.

Twelve months on, only one officer has faced any charges relating to the bungled raid.

Brett Hankison is accused of wanton endangerment after some of his ten shots strayed into a a neighboring apartment.

Her death and that of George Floyd in Minnesota sparked months of Black Lives Matter protests last year.

"Breonna Taylor's death was a tragedy, a blow to her family, her community, and America," the President tweeted.

"As we continue to mourn her, we must press ahead to pass meaningful police reform in Congress.

"I remain committed to signing a landmark reform bill into law." 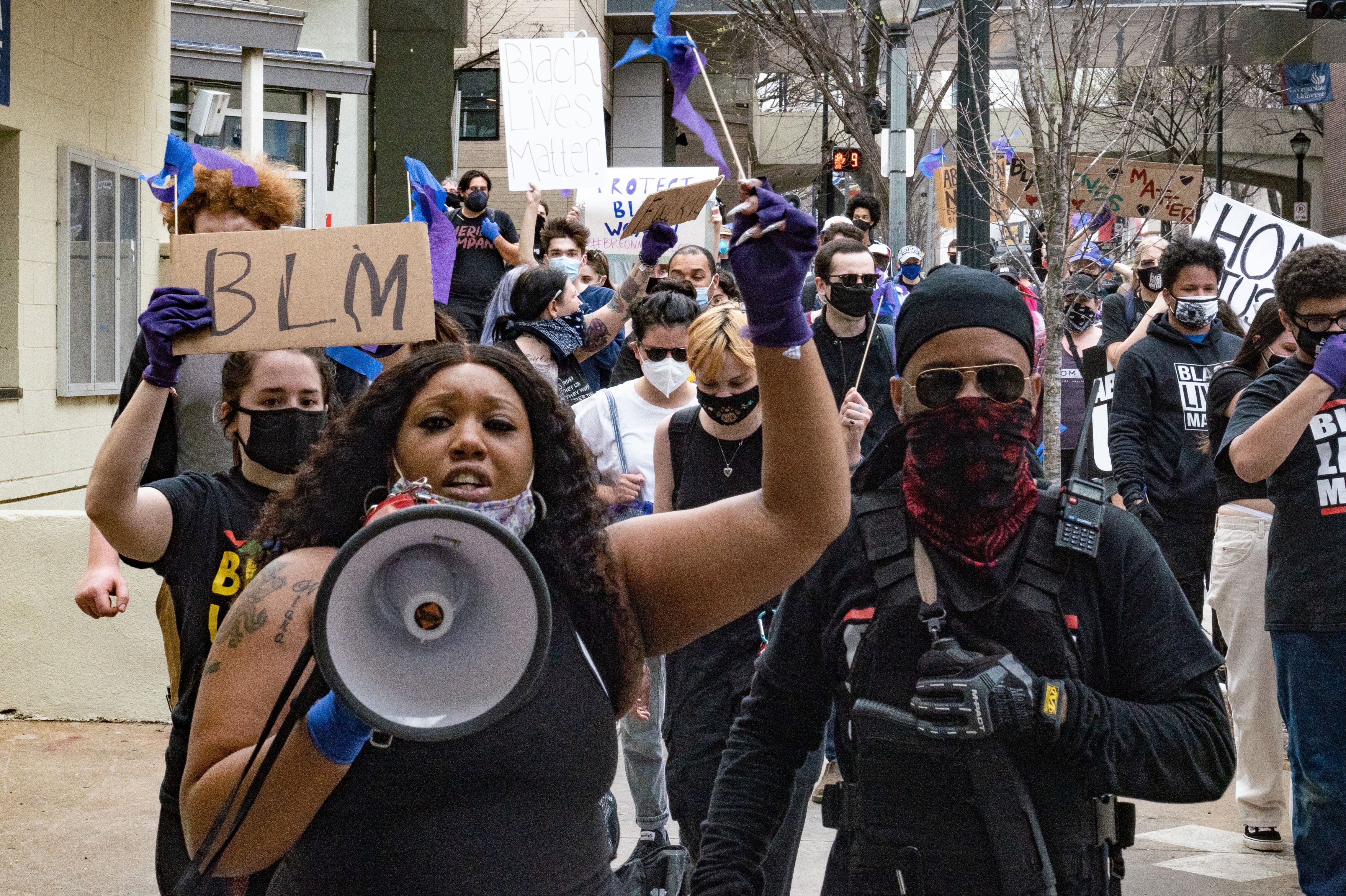 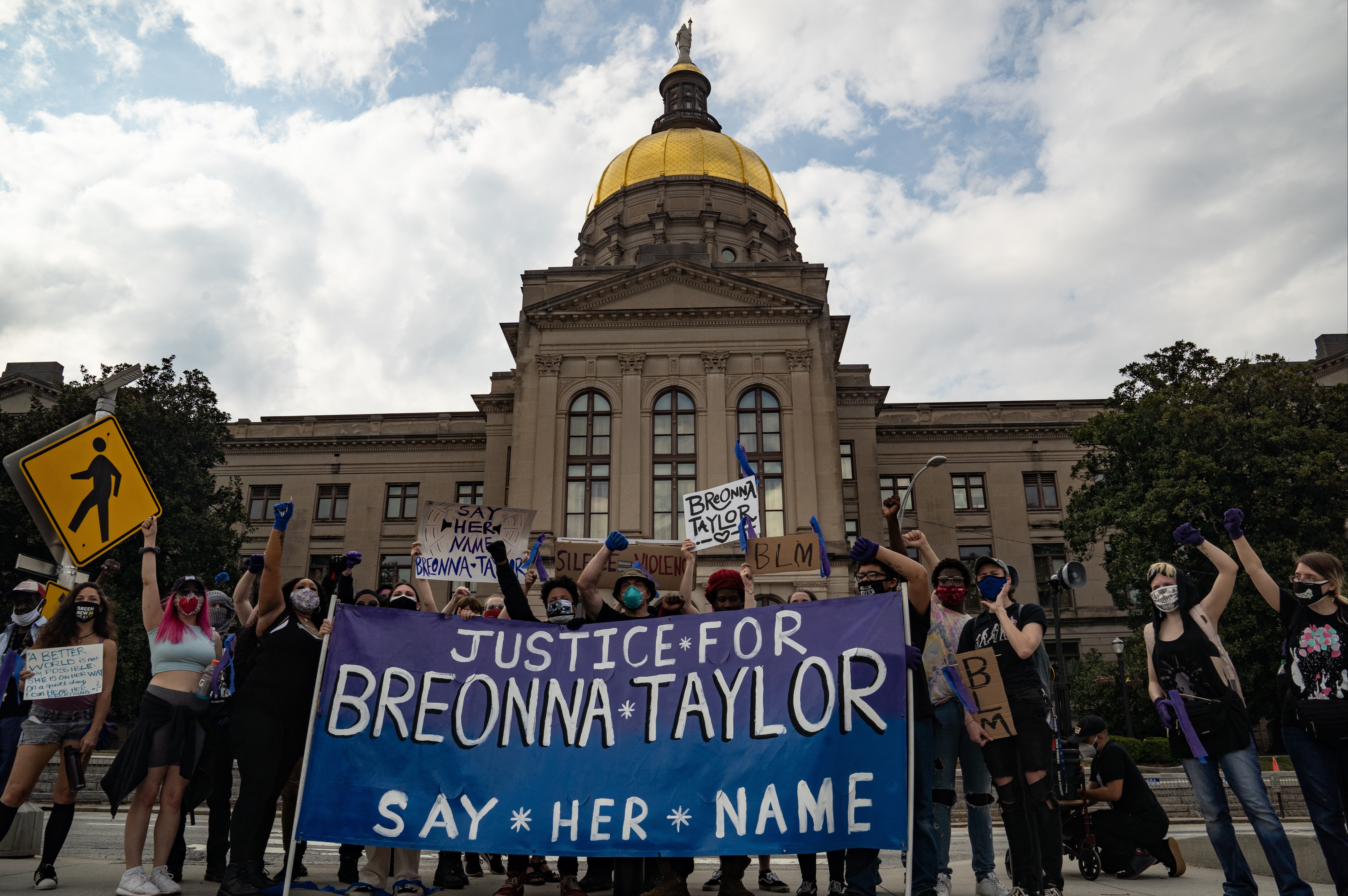