London: Liz Truss, the departing British prime minister, is eligible for a taxpayer-funded allowance capped at £115,000 ($203,000) a year for the rest of her life.

Despite her short time in office, Truss became eligible on Thursday for what’s called the Public Duty Costs Allowance — a government reimbursement plan for staff and salary costs incurred by former prime ministers “arising from their special position in public life” after they leave office, according to the government’s website. 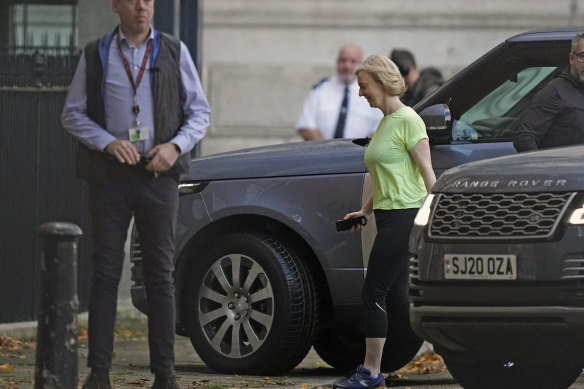 Liz Truss arrives in Downing Street in London, Friday, a day after resigning.Credit:PA

This has drawn scorn, however, from some of Truss’ political opponents, who have called for her to be refused the payment because of what they see as her role in Britain’s political and economic turmoil.

“There is no way that she should be permitted to access the same £115,000 a year for life fund as her recent predecessors — all of whom served for well over two years,” Christine Jardine, the spokesperson for the Cabinet Office of the Liberal Democrats, said in a statement.

“Truss’ legacy is an economic disaster — for which the Conservatives are making taxpayers foot the bill,” Jardine said, adding that the potential payout would leave “a bitter taste in the mouth of the millions of people struggling with spiralling bills and eye-watering mortgage rate rises thanks to the Conservatives’ economic mismanagement.”

“She has not earned the right to that entitlement. In my view, she should turn it down,” he said.

The money has been a standard payout since it was introduced in 1991, in the wake of Prime Minister Margaret Thatcher’s resignation. Truss would became the sixth former British prime minister to receive the lifelong allowance — if she accepts it.

Truss’ office could not immediately be reached for comment on Thursday night.

Two former British prime ministers, John Major and Tony Blair, continue to receive the maximum yearly amount of €115,000, according to the most recent financial report published by Britain’s Cabinet Office.

The Sunday Times reported in 2018 that Blair had so far received £1 million from the pot. Former Prime Minister Boris Johnson is also eligible for the allowance, but the amount he has received, if any, since resigning in July has not been made public.

Truss is also entitled to money to cover the pension costs of her staff. That can be up to 10 per cent of the $203,000 allowance (based on the current exchange rate).

There are rules undergirding the allowance. It is not intended to finance former prime ministers’ private lives, according to guidance published by the Cabinet Office.

The allowance cannot be claimed “in advance of need.” And former prime ministers cannot draw the money while serving as leader of Britain’s main opposition party.

(Truss would still be eligible if the Conservative Party were to lose in Britain’s next general election and become the country’s main opposition party, since she is stepping down as party leader.)

The guidance also stipulates that if Truss were to accept any other public appointment, the level of the allowance would be reviewed.