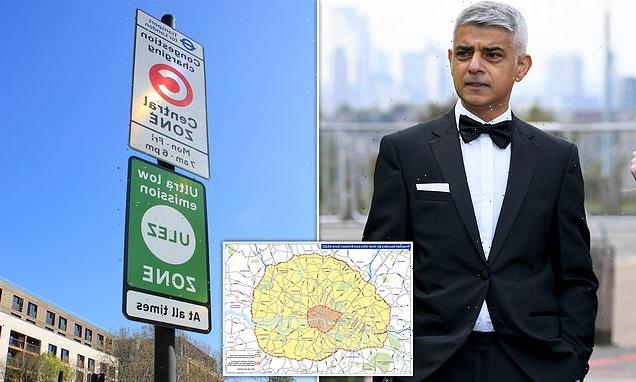 Sadiq Khan insists ultra-low emission zone expansion is a ‘matter of life and death’ with 300,000 motorists set to be hit by £12.50 a day charge to drive their vehicles on Monday – as it is revealed only 6,700 car drivers have been helped by £61m grant

London Mayor Sadiq Khan has refused to allow an extension to Monday’s deadline for new controversial ultra-low emission zones across the capital as he insisted the scheme was a ‘matter of life and death’.

300,000 motorists using the boundaries of London’s North and South Circular roads are now set to be hit by a £12.50-a-day charge when driving their vehicles after this weekend.

Labour mayor Mr Khan had faced renewed pressure from Conservatives within the Greater London Assembly to postpone the huge widening of the ultra-low emission zone (Ulez), which will now stretch across more than 18 miles in the capital.

Speaking to BBC London on Thursday, Mr Khan insisted the expansion was a ‘matter of life and death’. He added: ‘We can’t afford to wait any longer.’

It comes as MailOnline uncovered that a £61million scrappage scheme introduced in February 2019 that was designed to help low-income families switch to cleaner vehicles had almost run out of cash.

As just 6,700 drivers were revealed to have benefitted from the grant, TfL warned that they only have enough funds remaining to support a further 1,500 applications, just days ahead of the massive Ulez expansion. 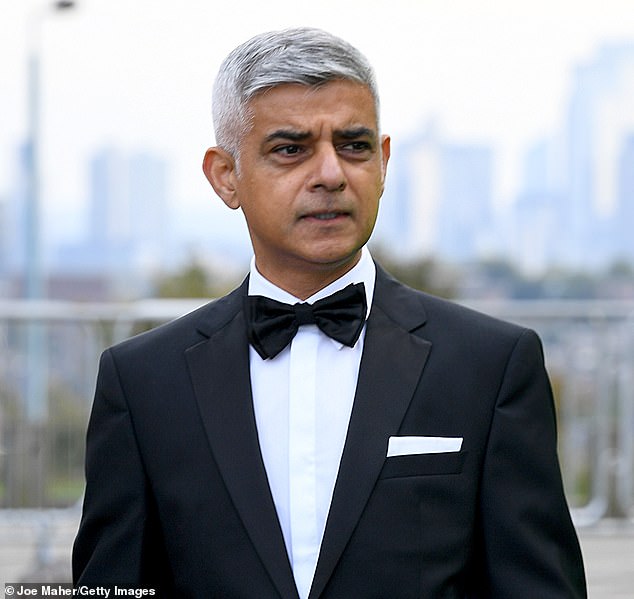 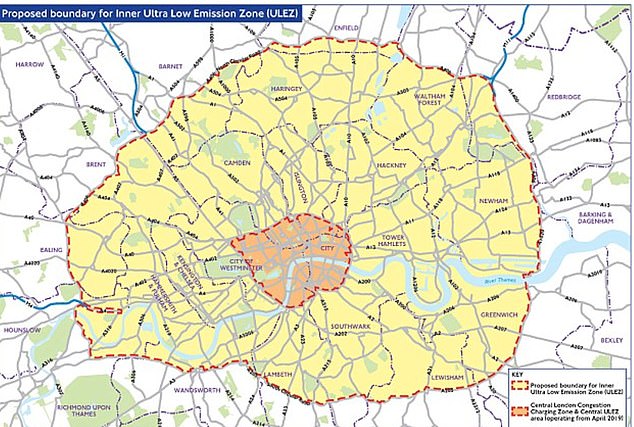 £12.50 ULEZ zone: The ULEZ currently covers the red area of central London from Westminster to the City of London. It will expand up to, but not including, the North and South Circular Road (shown in yellow), on October 25 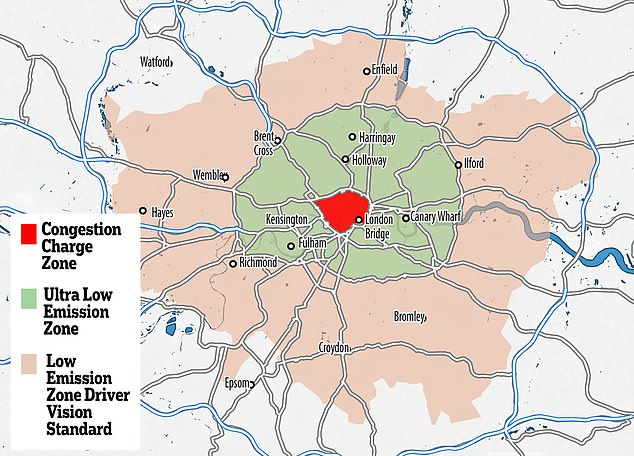 The Evening Standard said that by 20 September, TfL had received 19,594 applications for the scheme but had accepted 8,132 and paid out only on 6,854. Around just half of applications are expected to be accepted for the grant.

The revelation that TfL’s scrap funds were running dry comes as many Londoners face financial hardship in the wake of Covid, including those who are unemployed following the termination of the furlough scheme at the start of the month.

The Ulez scrappage scheme is only available to those who receive one of a number of benefits. These include universal credit, child tax credit, pension credit and working tax credit.

It is only available to those who live in one of the 32 London boroughs and the vehicle being scrapped must be insured, have an up-to-date MOT certificate and be taxed. Only vehicles that are not ULEZ compliant are eligible for the scheme. 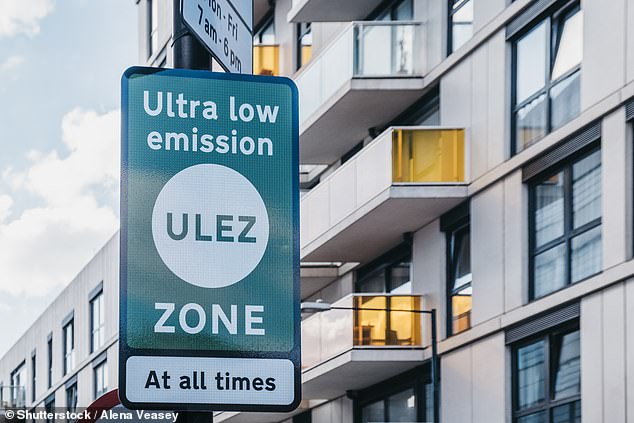 What is it?  The ULEZ is a way of charging vehicles which emit the most nitrogen oxide for entering parts of London.

When does it apply?  The daily charge runs from midnight to midnight every day.

Where is it happening?  The scheme is within the same area as the congestion charging zone, before being expanded to within the North and South Circular roads from October 2021.

London residents are not excluded.

How much does it cost to enter the zone with an older vehicle?  It costs £12.50 for most vehicle types, including cars, motorcycles and vans. Vehicles such as lorries, buses and coaches are liable for a £100 charge.

How can I avoid the charge?  To be exempt from the Ulez charge, petrol cars, vans and minibuses must meet the Euro 4 emissions standard and diesels must meet Euro 6. That means the oldest cars that can be driven in central London without paying are roughly a four-year-old diesel model or a 13-year-old petrol model.

What if I don’t know my vehicle’s emissions standard?  Drivers can check whether their vehicle is liable for a charge by entering its registration on the Transport for London website.

Why was ULEZ introduced?  London Mayor Sadiq Khan says the scheme will improve the capital’s air quality, which he says is responsible for thousands of premature deaths and other serious conditions.

Has there been any opposition to the scheme?  Conservatives on the London Assembly claim Mr Khan’s decision to introduce the scheme earlier than planned could catch out some motorists – particularly those from the poorest households – who have not already upgraded their vehicle to a newer model. They also warn that expanding the zone to the whole of inner London will not effectively tackle pollution and will affect people and businesses in areas with low pollution.

What vehicles are covered by ULEZ?

It’s not just cars and vans that will be subject to extra charges in London.

These ULEZ non-compliant vehicles will also be impacted:

Warning the capital faced an ‘air pollution crisis’, Mr Khan said that 4,000 Londoners were prematurely dying each year due to the city’s toxic air.

He added that 60 per cent of people living in the new ultra-low emission zone area did not own a car, and it was the poorest Londoners who faced living with the worst pollution.

But in 2019, more than 330,00 motorists were understood to own cars in the new zone that did no meet ‘ultra-low emission’ standards, and are now faced with the prospect of forking out an extra £12.50-a-day charge.

The latest Transport for London estimates are significantly more conservative – with a predicted total of 137,000 cars, vans and HGVs now not eligible when driving within the expanded zone.

That total would generate TfL a tidy £2million-a-day if each vehicle paid their congestion charge, reports the Evening Standard.

But Patrick Doig, head of finance at TfL, warned that predicting any tangible figure of net revenue from Ulez penalties and fines was ‘extremely uncertain’.

Approximately 80 per cent of vehicles in the newly expanded Ulez area already comply with the capital’s increasingly stringent emission regulations.

Asked where he would expand the Ulez further across Greater London, Mr Khan struck a pensive tone: ‘Let’s wait and see what the results are.’

He also admitted that income generated from the Ulez expansion was expected to be ‘quite limited’, insisting he was ‘keen’ no-one paid the charge and instead opted for ‘clean’ transport options such as public transport, walking or cycling.

The £12.50 Ulez charge is applied on top of the £15 congestion charge to all petrol and diesel cars, vans, lorries, motorcycles unless they meet ultra-strict emissions standards.

It means drivers including London residents will be charged £27.50 a day to drive into central London if their car does not meet the ULEZ standards.

Earlier this month, Tories with the GLA blasted Mr Khan’s decision to plough ahead with Ulez expansion as ‘absurd’, warning people had not been able to prepare for the changes while the nation fought off Covid-19.

They blasted the move as ‘harmful in normal times’ but said it would be ‘devastating’ after havoc wreaked by the pandemic over the last 20 months.

All types of vehicles are affected by the fare apart from black taxis – and to be exempt, petrol cars, vans and minibuses must meet the Euro 4 emissions standard, which covers all vehicles registered after January 1, 2006.

Diesels must meet Euro 6, which counts for ones rolled out after September 2015, while all electric cars are and hybrids are if they Euro 4 or 6 compliant.

When the new scheme is introduced on Monday it means the oldest cars that can be driven in London without paying the charge are a four-year-old diesel or a 13-year-old petrol.

TfL now estimates that just 20 per cent of residents within the expanded zone from next week will own non-compliant cars.

For passenger car owners alone, it says around 100,000 drivers per day are set to still be charged.

However, motoring group the AA is still estimating that the true figure is more than that, saying 300,000 residents are still driving motors that are going to be charged £12.50 a day to use.