A staff survey conducted last month by MSS Security, which provides guards for the tennis, showed about 10 per cent of its approximately 6000 workers were fully vaccinated, according to a source briefed on the data who was not authorised to disclose it. 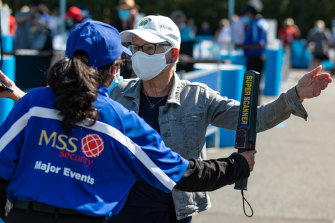 Only about 10 per cent of MSS security workers have been vaccinated, a staff survey shows.Credit:Getty

The one-in-10 figure is in contrast with the state’s overall vaccine-eligible population, which Premier Daniel Andrews on Wednesday predicted would hit the target of 70 per cent having at least one dose by Thursday. This could trigger an immediate easing of some lockdown restrictions.

The state recorded 423 more COVID-19 cases and two deaths on Wednesday, and Victoria Police Commissioner Shane Patton announced Melbourne’s public transport network would shut on Saturday to prevent people from going to a lockdown protest. More than 2000 police will patrol the CBD in what Mr Patton called “the biggest game in town”.

The below-average inoculation rate among MSS Security staff, most of whom are casual employees, has worried event organisers who have been in talks with the Victorian government about whether public-facing staff must be vaccinated to ensure the safe operation of events that could begin with the spring carnival in November and lead into the cricket and tennis.

Many security guards are younger men on temporary visas, and the Ethnic Communities Council of Victoria believes many of those from a non-English-speaking background were unaware they could get jabbed for free like Australian citizens. 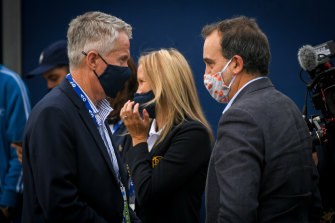 MSS has encouraged vaccination by offering workers $100 gift cards. The Age can also reveal Australian firm Downer – which employs 37,000 people and provides cleaning and catering at the MCG – will employ new workers only if they are fully vaccinated.

“More generally, we’re working with the Commonwealth on how a vaccine certificate could operate. But, clearly, being double-jabbed is going to open a lot of doors pretty soon.”

Vaccinating guards is made difficult because many large security companies subcontract to smaller labour supply firms to provide the staff, meaning the parent company often has minimal relationship with the guards who wear its uniform.

A senior figure in the major events industry, speaking anonymously to detail the concerns of event organisers, said they could face difficulty finding enough vaccinated workers to fill roles, especially because more security guards than normal would probably be needed to enforce pandemic measures such as mask-wearing and social distancing.

“Getting events back – not just footy, cricket and tennis, but also for music and other things – will rely on running them safely,” the source said, adding wage costs could increase if the pool of workers shrank because some people refused a vaccine.

“We’re probably going to demand that patrons and performers are vaccinated, but how will we get these events away if staff who have face-to-face contact are refusing? We’re going to need guidance from the state and federal government.”

Public debate on mandatory vaccines across society has escalated in recent weeks. The NSW government stated it will open parts of its economy to fully vaccinated citizens next month, and Mr Andrews has indicated he will follow suit.

National cabinet is set to approve plans to mandate inoculation for health workers this Friday, while several polls have indicated vaccine mandates are supported by most Australians.

Just over 20 per cent of Victorians are reluctant to be vaccinated, according to Melbourne University’s vaccine hesitancy tracking survey. However, this figure is closer to 30 per cent for people aged 18 to 44.

Eddie Micallef, chair of the Ethnic Communities Council of Victoria, said temporary visa-holders’ lack of clarity about their eligibility may be compounding their reluctance to be vaccinated.

“It’s very difficult to get them on board if they haven’t got the right information, incentives and support,” he said.

“They should be given access to vaccines on worksites or given appropriate leave for them to get vaccinated. There’s confusion right across the board and it needs to be full-scale encouragement.”

Giri Sivaraman, a principal lawyer at Maurice Blackburn specialising in employment law, said employers of casual workers could require vaccination among staff as long as it was deemed proportionate to the risk of the job, the workforce was properly consulted and vaccines were widely available.

He said a company’s decision to enforce vaccination would be strengthened it was a requirement of the event organiser. “It doesn’t mean it’s impossible to challenge, but it makes it very difficult because it becomes a condition of the contract.”

Downer, which owns cleaning and catering company Spotless, is not forcing current staff to be vaccinated but will require any new employees to be double-dosed.

Some organisations to which it provides workers, such as aged care facilities, already mandate vaccines and the policy to hire only vaccinated workers aims to increase the proportion of vaccinated staff while not taking the legally complicated route of forcing the jab on current workers.

MSS Security did not respond to repeated requests for comment.