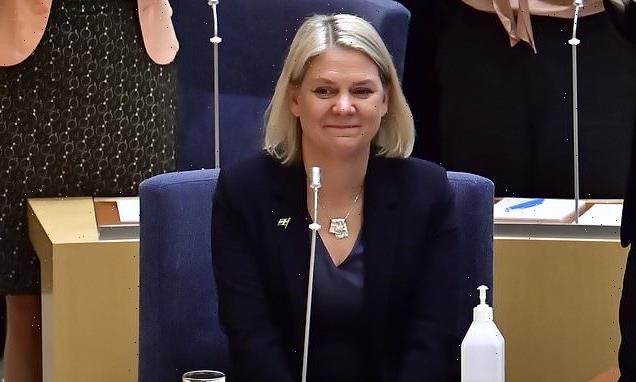 It’s Sweden’s first lady Prime Minister… again: Magdalena Andersson is elected into power for the second time in a week

Sweden yesterday elected its first female prime minister – for the second time in a week.

By last night, Magdalena Andersson had already outlasted her first stint in the job, which saw her quit after just seven hours.

In a 173-101 vote with 75 abstentions, the 349-seat Riksdag elected Miss Andersson, leader of the Social Democrats, as prime minister for the second time.

She will form a one-party, minority government with the Cabinet due to be named today.

Current Swedish Finance Minister and Social Democratic Party leader Magdalena Andersson (seated, right) receives applaud after being appointed as a new Prime Minister after a voting in the the Swedish parliament in Stockholm, Sweden

Miss Andersson served as leader of a coalition last week, only to be forced out on Wednesday when her Green partners walked away.

Their move followed the rejection of her government’s budget proposal in favour of one presented by opposition parties, including the Right-wing populist Sweden Democrats, which is rooted in a neo-Nazi movement.

Under the Swedish constitution, prime ministers can govern as long as a parliamentary majority – a minimum of 175 MPs – is not against them.