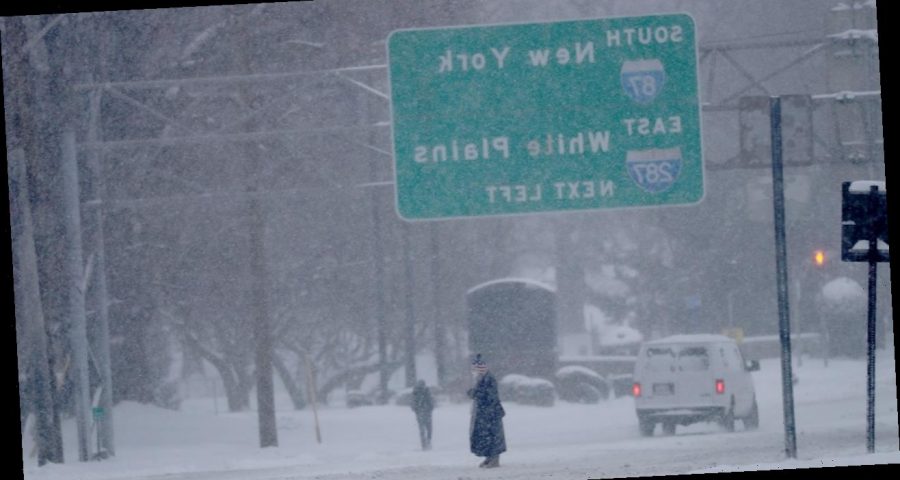 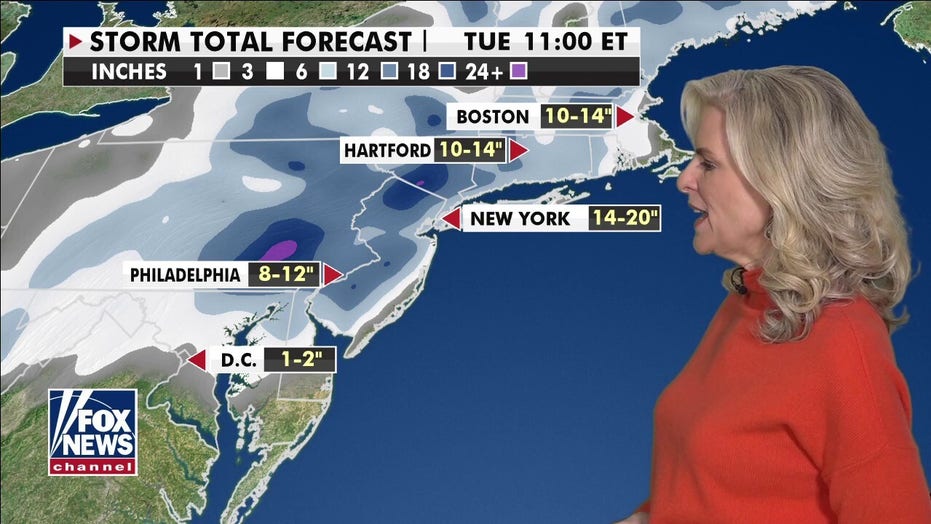 Janice Dean has your FoxCast.

A major winter storm slamming the Northeast on Monday morning is forecast to drop up to two feet of snow across an area stretching from Pennsylvania to New England, impacting cities such as Philadelphia, New York City and Boston.

Officials along the heavily populated I-95 corridor are warning residents to stay off the roads as snowfall rates may reach 2 inches an hour in some parts, while dozens of winter weather warnings and advisories are in effect. Nearly all flights heading in and out of New York City-area airports also already have been canceled, statistics show.

“On Monday evening, the snow will expand into Northern New England and continue over parts of the Northeast into Wednesday,” the National Weather Service says, adding that rain and freezing rain is possible today from Washington, D.C. to Philadelphia. 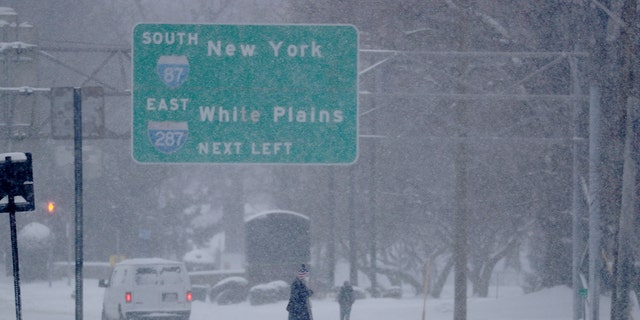 A pedestrian crosses a road in Tarrytown, N.Y. as a nor’easter is blanketing much of New York state on on Monday. Up to two feet of snow is predicted before the storm moves out Tuesday evening. (Reuters)

The NWS is forecasting that northeast Pennsylvania, northern New Jersey and southern New York will see the heaviest snowfall, with New York City expected to get as much as 20 inches.

In the Big Apple, Mayor Bill de Blasio has restricted nonessential travel this morning, warning locals of “blizzard-like conditions” and wind gusts of up to 50 miles per hour.

“Travel will be very difficult to impossible,” the NWS adds. “The hazardous conditions will impact the morning and evening commute. Gusty winds could bring down tree branches.” 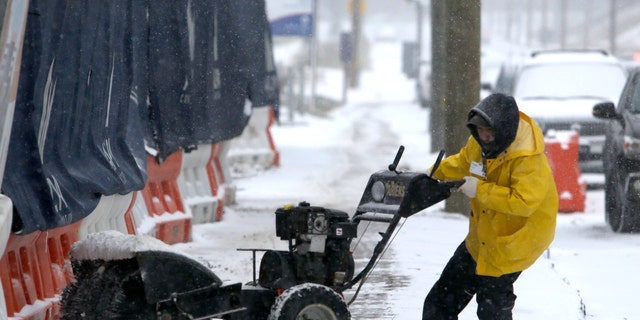 A man works to turn his snow-clearing machine on Sunday in Philadelphia. After days of frigid temperatures, the Northeast is being hit with a whopper of a storm that could dump well over a foot of snow in many areas and create blizzard-like conditions. (AP)

Elsewhere, Philadelphia is expected to get 5 inches of snow through Tuesday night, while Boston is forecast to receive 11 inches over the same period. Much of Connecticut, Rhode Island, Massachusetts, Vermont, New Hampshire and Maine will get at least 6 inches of snow. Isolated parts of Pennsylvania and New York, however, could get more than 2 feet.

Winds are also forecast to cause coastal flooding from the Mid-Atlantic to New England into Tuesday.

The storm made its way across the Midwest over the weekend before turning up along the Mid-Atlantic towards New England, bringing over a foot of snow in some parts of the country.

Lara Pagano, a meteorologist with the NWS, told the Associated Press that the nor’easter overall will be a “pretty slow mover”.

In New York, many vaccination appointments for Monday needed to be canceled as well.