Shocking moment gang of six thugs brutally beat screaming student, 20, over the head with a metal pole in horrific ‘random attack’ that he says he was ‘lucky’ to survive

An East London student needed reconstructive surgery after being brutally beaten by  a gang of thugs that was captured in a horrendous video.

Mohammed Mubin, from Mile End, said he was ‘lucky to be alive’ after being ‘mocked and taunted’ while a man hit him repeatedly with a metal pole.

The savage attack happened just yards from the student’s former school on St Paul’s Way, in Bow, on April 19, at around 10.30pm.

Six men were filmed mercilessly punching and kicking Mr Mubin on the ground in front of startled onlookers, on a road in east London.

The attackers, who appear to be in their twenties, hit the 20-year-old in the head several times and at one point held him by the scruff of his neck before taking turns to punch him.

After hurling dozens of punches at the victim, one man picks up what appears to be a metal pole and savagely beats it over his head.

About five minutes after the assault, police and an ambulance arrived to tend to the man who still lay dazed on the ground – by which point the assailants had fled the scene.

‘I remember the driver was screaming and swearing. He drove onto the pavement and we still didn’t know what was happening and everyone around was pretty shocked and confused,’ Mr Mubin told the Standard. 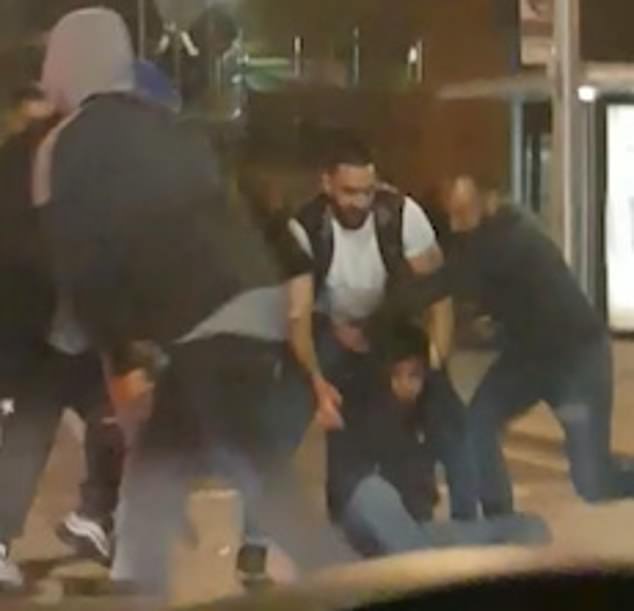 Six men punch and kick a helpless 20-year-old on the side of a road in Bow, east London 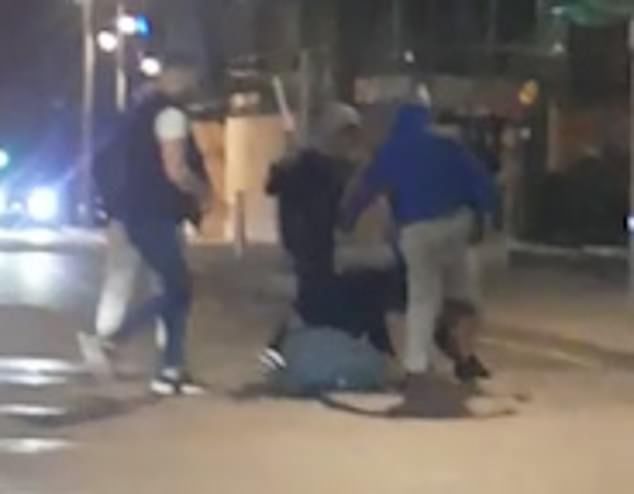 During the attack, on St Paul’s Way at around 10.30pm on April 19, the men show no mercy – in full view of startled passing motorists

The 20-year-old said that he was walking down the road in Mile End with friends when a car started to drive fast from behind them, before mounting the pavement.

He and his friends decided to run as they thought the car would eventually stop, but as his friends got away another two cars appeared.

The horrific footage, which was posted on social media, showed the seconds after Mr Mubin was chased down by the gang of six thugs and they then beat him to the ground.

One of men then uses a metal bar to repeatedly beat Mr Mubin over the head in what police are treating as a ‘random’ assault. 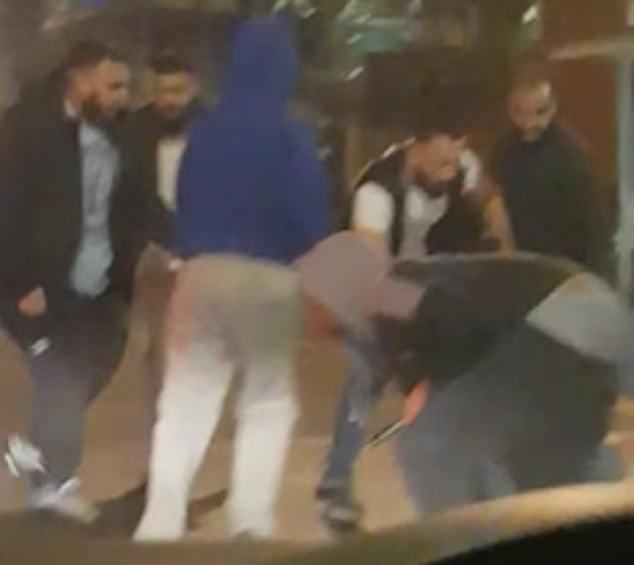 A restaurant manager, 31, who was driving home, said one of the men appeared to be holding a metal bar 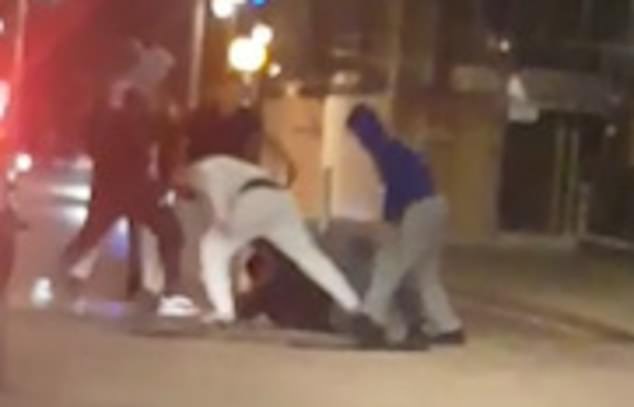 The victim, who suffered a facial injury, was taken to hospital where his condition was said to not be life-threatening

‘The whole time I was screaming but the men just mocked and taunted me, repeating what I was saying. I just gave up and thought there’s no way I could take on these men,’ said Mr Mubin.

Mr Mubin, who works part-time at Sainsbury’s, had to undergo re-constructive surgery for two fractures in his jaw and he also suffered two slash wounds.

He was unable to complete his final first year exam in business management at Greenwich after doctors told him to rest for up to eight weeks. 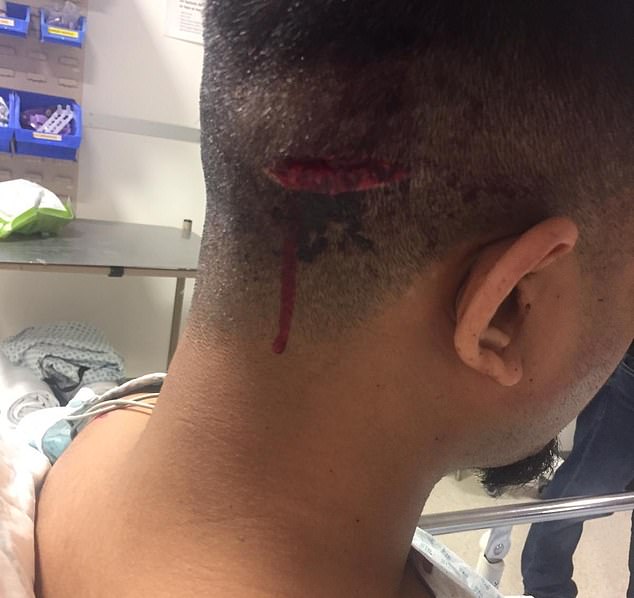 He added: ‘I’ve watched the attack video about 100 times trying to see if I recognised them, thinking maybe something will click and I would figure out who they are but I have no idea. They came like they had a personal vendetta against me.

‘I’m lucky to be alive, the doctors kept telling me it’s a miracle.’

A 31-year-old restaurant manager from east London said he witnessed the beating while driving home.

He said one of the attackers seemed to be holding a small metal bar while the defenceless victim was subjected to a flurry of blows.

‘I heard some shouting and [car] horning and, as we got closer, I began to see what was happening and that’s when I told my wife to start filming,’ he said. 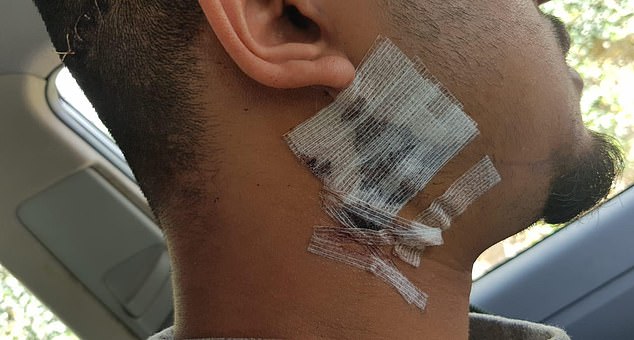 ‘This guy was mercilessly being beaten and I initially thought they had knives but when I looked at the video, I think it was a pole or metal bar or something.

‘They literally just beat him up and they all ran off after and left him on the road.

‘Everyone horned to try and get the guys away. The men were in their late 20s – I couldn’t make out what they were saying.’

A Metropolitan Police spokeswoman told MailOnline: ‘Police were called on Friday, 19 April to reports of a fight between a group of youths at St Paul’s Way, E3.

‘Officers and London Ambulance Service attended. At the scene, a 20-year old male had suffered a facial injury.

‘He was taken [by ambulance] to an east London hospital where his injuries were not life-threatening.

‘Officers from Tower Hamlets are investigating. No arrests have been made. Enquiries continue. Anyone who witnessed this incident or has information is asked to call police on 101 quoting 8532/19APR, Tweet @MetCC or call Crimestoppers anonymously on 0800 555 111.’