The man from Snowy River immortalised in Banjo Paterson’s famous poem has always been portrayed as a white man, but new claims in a book suggest he was based on events surrounding an Indigenous stockman.

The poem written in 1890 tells the story of a horseback pursuit to recapture the colt of a prizewinning racehorse that escaped and ran off with brumbies. The wild horses descend a seemingly impassable steep slope, at which point the riders in pursuit give up, except one who spurs his pony down a dangerous gully to catch the mob. 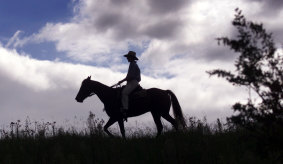 A depiction of The Man from Snowy River at the Royal Easter Show in 2000.Credit:Jacky Ghossein

In The Brumby Wars, released on Wednesday, author Anthony Sharwood says lines in the poem indicate the fabled heroics took place in the Byadbo region of the Snowys, where he says all the local stockmen were Indigenous riders.

His theory is based on the final stanza in the poem, which begins with the couplet:

“And down by Kosciuszko, where the pine-clad ridges raise,

Their torn and rugged battlements on high.”

Sharwood said Byadbo is “the only part of Australia’s alpine region and nearby foothills with cypress pine forests, a native conifer that thrives in dry country”.

“If the poem was sourced from stories of the Byadbo area, then the stockman had to be Aboriginal because all the best riders in the area had Indigenous blood,” he said.

In his book, Sharwood examines the case for reducing brumby numbers because they are overgrazing the national park and are protected because of the romantic vision of wild horses.

“Forget that Paterson knew they were pests and advocated for them to be shot to protect the pasture for cattle,” he said. “The brumbies are characters in the poem and that makes them sacred, eternal, untouchable, as quintessentially Australian as Vegemite and thongs.”

In the movie The Man from Snowy River (1982), the lead character Jim Craig is played by actor Tom Burlinson, born in Canada to English parents. 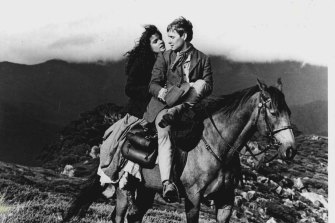 Sigrid Thornton and Tom Burlinson in The Man From Snowy River.Credit:Archive

Others have previously suggested the man was Indigenous. In 1988, the official historian for Victoria, Bernard Barrett proposed the character might have been based on a young Indigenous tracker named Toby, “a better rider never sat a horse”.

Another candidate is Jack Riley who, while not Indigenous, is said to have met Paterson and whose reputation as a fearless rider was legendary.

Professor Jakelin Troy, director of Aboriginal research at Sydney University is an Aboriginal Australian from the Ngarigu community of the Snowy Mountains. “I don’t think any of us really care who the man, or woman, from Snowy River was, but it is an interesting thing to explore because it definitely plays into the mythology of the area,” she said. 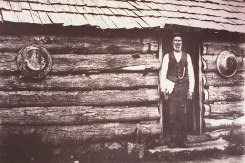 Jack Riley had a reputation as a fearless rider.Credit:Dennis Gregory

“One piece of research says he was my father’s great uncle called Jim Troy. Banjo stayed with the family and Jim Troy fits the description even down to the horse. They bred them tough like their horses which were a mixture of Timor pony which are really tough and thoroughbreds with a bit of Arab to make them a bit finer. The horses were a mixed breed … We will probably never know who the actual person was.”

The Brumby Wars is released on Wednesday by Hachette.