A barber was seen trying to avoid breaching Covid rules by giving a man a haircut on the street while salons remain closed during lockdown.

Footage shared from Forest Gate in London on Tuesday shows one man shaving another man’s hair as he is sat in a chair.

It was shared online just a day after Boris Johnson announced a roadmap out of lockdown, which included details on when hairdressers would reopen.

It’s not clear whether the two people being filmed are from the same household, or whether he is a paying customer and opted for a trim next to some bin bags.

Tuesday’s footage sparked a debate online over whether outdoor haircuts should be allowed, as they’re taking place in the fresh air.

Under current Covid guidelines, nobody can meet anyone from outside their household, unless one of them lives alone and the other is part of their support bubble. 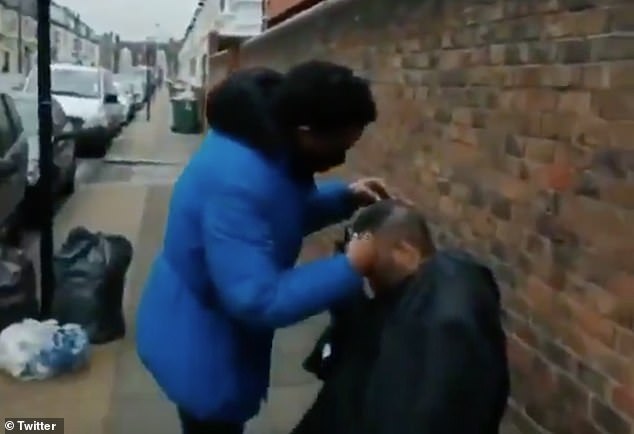 Footage shared on Tuesday showed a man getting his hair cut in the middle of a street in Forest Gate, East London

The current plans are to reopen barbers, hairdressers and salons on April 12 – but the date could change if Covid infections spike.

Hair salons were included in these services, with guidance reading: ‘Those who provide personal care services from a mobile setting including their own home, in other people’s homes and in retail environments (such as a concession in a larger, separate business) must also stop operating.’

Hairdressers are able to continue working, if they are part of sectors that have remained open, such as in film and TV production – however, their premises have to remain closed. 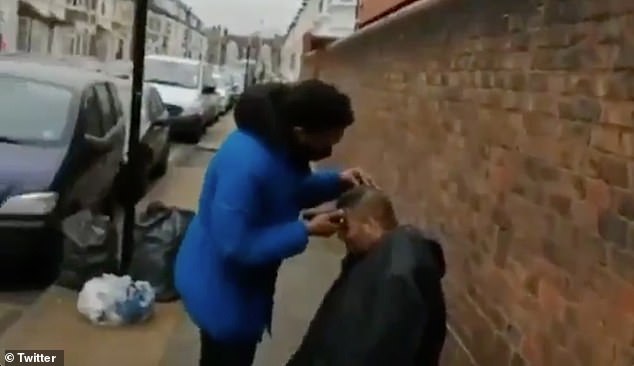 The man could be seen getting his head shaved close to some bin bags on Dunbar Road. Barbers are expected to remain closed until April 12 at the earliest

Lockdown rules announced last month warned that all hair salons ‘must close,’ according to the Government’s website.

Guidance for those working in the industry said mobile hairdressers and barbers ‘must also stop operating’.

Only hairdressers working in an open-industry, such as TV production, can continue working, but their own premises must stay shut.

The Government’s roadmap, published on Monday, announced hairdressers and salons could reopen as early as April 12, subject to Covid infection rates.

The video was posted to Twitter and shows someone walking past a man sitting on a chair on the pavement as a hairdresser shaves his head.

The video was accompanied by the caption: ‘Meanwhile in Forest Gate.’

Most people said they had no issue with the street haircut.

One viewer joked: ‘Anyone know how much he’s charging?’

Another said: ‘Not sure I see a problem here. Outdoors so very small risk. Barber should wear a mask and gloves though.’

One said: ‘Man’s getting a fresh trim. What’s the issue. Young and skilled. Make your money.’

Despite lockdown closing hair salons, police have caught some businesses flouting the rules.

City of London Police handed out a £1,000 fine for the ‘blatant disregard of coronavirus regulations’.

Last month 31 police officers were handed fines after they hired a barber to cut their hair at a police station.

They hired a professional barber to come in and cut their hair at Bethnal Green police station in East London on Sunday, January 17 – while the country remains in the grip of its third lockdown, with more than 1,000 people dying every day.

The Metropolitan Police officers have all been given the fixed penalty notices for breaching Covid-19 regulations while on duty.

Barber shops are meant to be closed – but last Friday police busted a rave at Kiss Kuts in Croydon.

The alarm was raised when someone heard loud music coming from the business.

Officers found 22 people at the party ignoring the Covid restrictions.