The state government is funding a crime prevention project in the CBD, as a study has found almost half of women don’t return alone to areas they feel unsafe in.

The $193,000 grant will go towards Melbourne City Council’s Night Justice project, which aims to reduce sexual assault and improve safety for women and gender diverse people. 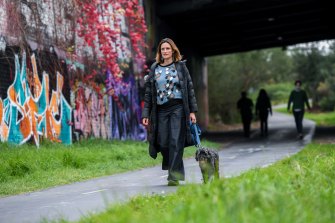 “For many of us women who love to go out at night, we know that there’s always a sense of some insecurity sometimes walking alone,” she said.

“I want to be part of a city that feels safe, where women can be out and about and feel that they have just as many rights as men.”

Melbourne lord mayor Sally Capp said creating a safe atmosphere for women and non-binary people was an important part of a welcoming and thriving nightlife.

It comes as Monash University’s gender, design and space research group, the XYX Lab, has released interim results from crowd-souring interactive map YourGround, which allows respondents to mark spots in Victoria as safe or unsafe and leave an anecdote.

The project, which runs until July, is a partnership with 22 local government areas, Respect Victoria and the digital agency CrowdSpot and is gathering data from women and gender diverse people for town planners to design more secure public spaces.

It has so far found that 40 per cent of respondents do not return alone to areas they feel unsafe in, while 13 per cent don’t never go back.

Hotspots on the map include near the safe-injecting room in Richmond, where respondents report feeling unsafe around drug users, witnessing fights and being verbally abused; Flinders Street Station in the CBD, where one respondent was spat at and another felt like “prey”; and Fitzroy and Grey streets in St Kilda, where respondents complained about poor lighting, aggressive people and the smell of urine.

Respondents, of which 2 per cent identified as neither male or female, also reported areas with winding footpaths, hidden spots, rubbish and vandalism as unsafe.

Areas marked safe included Citizens Park in Richmond, due to bright lighting, wide paths and a “good vibe”, Chinatown in the CBD, which was described as “brightly lit and bustling” and the Bay Trail, along St Kilda Beach, where a respondent wrote they often walked on it in the evening.

Being able to see ahead made 70 per cent of respondents feel safe, while other pedestrians, murals, trees, new buildings and tidy spaces also increased perceptions of safety.

“Is it real risk, is it just their perceptions – it actually doesn’t matter because … if you’re opting out of using those spaces as a result of that then that actually is a huge opting out of public life,” she said.

“What we’re able to see is that there’s a vigilance, there’s alertness, there’s particular levels of stress that women and gender diverse people are carrying with them.”

Dr Kalms, whose group translated participation information into seven languages, said while anti-social behaviour added to feelings of unsafety, it was important not to stigmatise people with social problems.

Brunswick resident and occupational therapist Anita Major-Brown, who marked the underpass between Royal and Princes parks as unsafe, said she avoided it at night and advised her three daughters not to use it at all.

“It’s a one way in one way out sort of path, with a low bridge and with poor lighting,” she said.

“I look over my shoulder when I’m feeling unsafe. I walk faster. I might wrap my hands around my keys in my pocket.

Ms Major-Brown said the close-to-home murders of Jill Meager and Eurydice Dixon had impacted on parent’s perceptions of safety for their children in Brunswick and that her daughters were already growing up fearful.

“[Men are] unaware of how how conscious, how cognitively, we think about safety.”