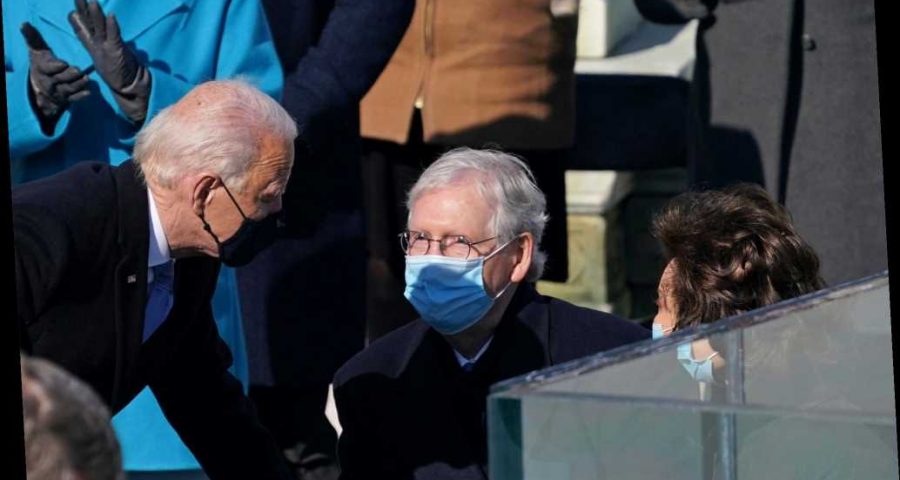 Senate Minority Leader Mitch McConnell on Thursday slammed President Biden for unleashing a “tsunami of pink slips” as part of a “craving for symbolic gestures” with his $2 trillion environmental policy agenda announced Wednesday.

McConnell (R-Ky.) said those policies, including a moratorium on new oil and gas drilling on federal lands, will harm the economic recovery from COVID-19.

“China, Russia and our other competitors must be thrilled, absolutely thrilled that our new government is essentially declaring war on some of our own economic foundations to satisfy a craving for symbolic gestures,” McConnell said on the Senate floor.

McConnell said the push is “willfully throwing our own people out of work, reducing our domestic energy security, rising costs and prices for working families. All for no meaningful impact on global temperatures, just to buy applause at those international conferences where the participants all assemble by private jet.”

Biden on Wednesday unveiled a lengthy set of actions and proposals to restrain coal, oil and gas and promote renewable energy sources — after withdrawing approval for the Keystone XL oil pipeline and rejoining the Paris Climate Accord last week.

According to statistics cited by McConnell, “the decision on federal lands will leave us down nearly 1 million American jobs by next year alone.”

“It is a heck of a way to kick off a presidency — mass layoffs of our own citizens, working Americans in other sectors will pay as well. One analysis found his decision could increase household energy costs by almost $20 billion over the next decade. And President Biden, [environmental adviser] John Kerry and the whole gang appear to be just getting warmed up,” McConnell said.

He said federal lands account for 65 percent of oil and gas jobs in New Mexico and 40 percent in Colorado.

McConnell is the most powerful Republican in Washington due to Senate rules that require a 60-vote super-majority to pass legislation. Some of Biden’s priorities outlined in his Wednesday order will require legislation, such as a plan to replace US Postal Service trucks with electric vehicles.

McConnell accused Biden — who on Wednesday argued his policies would create new jobs — of misrepresenting himself as a friend to union workers.

“It shouldn’t be this way, not with a president who campaigned on protecting the lunch-pail union jobs that his left flank wants to eliminate. The president was not elected to enact policies that prompt a certain young congresswoman from New York City to boast online that her radical ideas are shaping his energy policies,” he said, referring to celebratory remarks from Rep. Alexandria Ocasio-Cortez (D-NY).

“The last four years prove that growing our prosperity, reducing emissions and expanding domestic energy are actually not in tension. We can achieve all three,” he said.

“There’s nothing green about a tsunami of pink slips for American workers or carting Canadian crude around [in] trucks and trains instead of a pipeline.”

Kerry, Biden’s climate czar, admitted Wednesday that the US reducing its emissions to zero wouldn’t make much of a difference in the global climate change fight — before pushing domestic manufacturing of electric cars and solar panels in favor of energy production.

“He knows Paris alone is not enough,” Kerry told reporters at a White House press briefing, referring to Biden re-entering the US in the Paris Climate Agreement in one of his first acts as president.

“Not when almost 90 percent of all of the planet’s global emissions come from outside of US borders. We could go to zero tomorrow and the problem isn’t solved,” Kerry conceded.

Responding to a question about Biden’s climate plan causing massive job losses in oil, gas and coal industries in states across the country, Kerry insisted that energy workers had been “fed a false narrative” about what environmental policy changes would do to their livelihoods.

The truth, he said, was that the people working in energy and coal impacted by climate change efforts will “have better choices” and can “go to work to make the solar panels.”

“They’ve been fed the notion that somehow dealing with climate is coming at their expense,” Kerry said. “No, it’s not. What’s happening to them is happening because of other market forces already taking place.”

“Coal plants have been closing over the last 20 years. So what President Biden wants to do is make sure those folks have better choices, that they have alternatives, and they can be the people who go to work to make the solar panels.”