When Melbourne year 9 students Jack, Darcy and Wesley set up CovidBaseAU earlier this year, they wanted to keep the fact they were children secret.

They felt it wasn’t necessary to be identified right away – the coronavirus data and their smarts should speak for themselves – and they wanted their tracking site to be taken seriously. 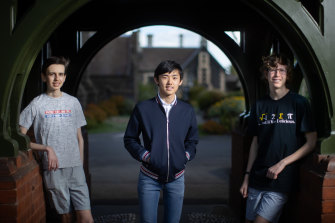 Jack, Wesley and Darcy, the brains behind the highly regarded CovidBaseAU database.Credit:Simon Schluter

But with more than 17,000 followers on Twitter and a whole lot of people holding them in high regard, they decided on Thursday the time was right to make the big reveal.

The group unveiled their identities with a photo on Twitter after receiving their first shots of the Moderna COVID-19 vaccine.

By Friday afternoon, CovidBaseAU’s had more than 26,000Twitter followers.

“People were always sort of impressed, but it’s more of just the shock factor that I think has got a lot of people,” Jack said.

“I’ve seen a lot of people saying, ‘jaw drop’ – no one would have thought, I think.”

Jack, 15, first got into tracking COVID-19 data during Victoria’s second wave last year, then he and his best mates decided they could put their unique skill sets to good use and set up a Twitter account and website.

“I probably do a lot of the writing, say [for instance], we wrote up a thread on Twitter a week or two ago … about the different vaccine projections and how some can be misleading,” Jack said. “I also work out what data we use and I store it all in a Google sheet.”

That’s where Darcy comes in. He got into coding when he was about 7, teaching himself by using books, websites and videos. The boys get their data from Australia’s federal, state and territory health departments.

“From the PDF or the tweets that each state government puts out with the latest numbers, I get the data off of that, process it into a CSV, which is just a file for values, basically,” Darcy said.

“Then that can be put into the spreadsheet, then the spreadsheet does calculations and produces the graphs so there’s an output, and then those graphs are displayed on our site and also the data on there is also then converted into tables that are also on the site.”

Wesley, 14, wrangles the data into attractive infographics for the website and Twitter. While there are a number of sites people can use to push out infographics, he prefers to make them himself using Adobe Illustrator.

“It gives you more freedom to do anything,” he said.

The trio – whose families have requested their surnames not be used – all go to the same school in Melbourne, where they are able to hone some of their skills in much-loved subjects like maths and science. But Jack said they have learnt a huge amount with the CovidBaseAU project.

“Say with all this spreadsheet stuff on Google Sheets and Excel, I would have known like almost nothing compared to what I know now back at the beginning of the year, even.”

Lockdown has had some benefits for the boys in that their schedules are more flexible, so it is easier to stay on top of the COVID-19 data, but Jack concedes it is still “a big juggling act”.

As for what the future holds for the trio, Jack is thinking about whether he’d like to go into politics or data and analytics one day – he stresses “the three of us do not have any political sort of motivation behind” the CovidBaseAU project.

Wesley pictures himself in science, maybe in the physics field – “finding, discovering secrets about the universe; I find that fascinating” – while Darcy thinks he might go into something like software development.

For now, though, they are overwhelmed by the response to their project. They are glad it has been such a success and always figured it should be.

“We were like, well, if these other people can do it, there’s no reason we can’t,” Jack said.