A Mississippi commission on Wednesday will select the proposed design to replace the state’s current flag that the legislature voted to retire earlier this summer because of its inclusion of the Confederate battle emblem.

Members of the public submitted nearly 3,000 entries for the new flag’s design and the commission has narrowed it down to two — a shield and a magnolia.

The winning design will be put on the ballot for voters to approve in November. If voters reject the design the process will start again.

Magnolias were a popular design among the entries that included some more offbeat proposals for the flag like a teddy bear, Kermit the Frog and most memorably a giant mosquito which briefly made it as a semifinalist due to an error. 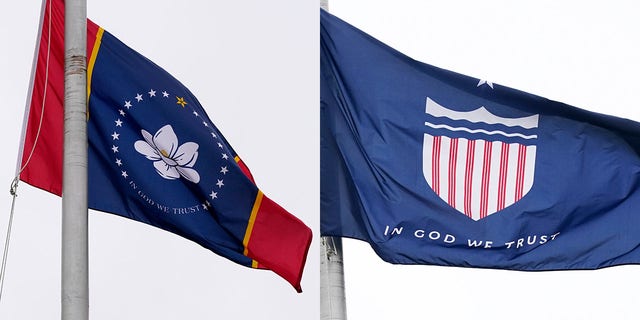 A Mississippi commission Wednesday will select the proposed design to replace the state’s current flag which the state legislature voted to retire earlier this summer because of its inclusion of the Confederate battle emblem.
(AP Photo/Rogelio V. Solis)

Mississippi decided to remove the Confederate battle emblem this summer against the backdrop of nationwide protests that sparked a new conversation about historical racism that is still woven into the fabric of the country.

By law, the new flag design cannot include the Confederate battle flag, and it must have the phrase, “In God We Trust.”

The magnolia design is a combination of submissions from five people. The magnolia is in the center with 20 stars encircling it (representing Mississippi as the 20th state) with a dark blue background and red bars on each side.

“What I wanted to do was show every Mississippian that there’s a compromise out there, and we are the magnolia state,” graphic designer Rocky Vaughan of Ackerman, Miss., who created the flag’s overall design, said. “If it’s appealing to the eyes, it will be accepted.”

The red-and-white shield design sits on a dark blue background with wavy lines at the top representing water.

Micah Whitson, who grew up in Alabama and graduated from the University of Mississippi said he felt designing the new flag was a moment he was “made for.”

He said the shield was inspired by the Mississippi Territory seal, issued in 1798.

Whitson said he has been creating art for years that he calls “love letters” to the South. He now lives in Boston.