This is the moment a furious plane passenger stuck chewing gum into a woman’s hair and dunked it in coffee – as the air hostess looked the other way.

Tension began to build between two female passengers on an airplane after one deliberately tried to block the view of the on-board TV with her long hair.

A video of the petty fight was posted online and has been viewed over 97million times.

The clip shows one passenger becoming irritated after the woman sitting in front of her kept draping her hair over the back of her seat during a flight.

She decides to take matters into her own hands and is seen putting chewing gum into the woman’s long, blonde hair.

A flight attendant wearing a black face mask walks past, sees what is going on and doesn’t get involved.

The woman takes out a nail clippers and snips pieces of the hair off before sticking a lollipop to it and dunking the ends of the hair in a mug of coffee. 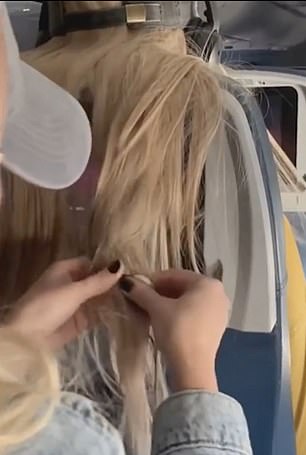 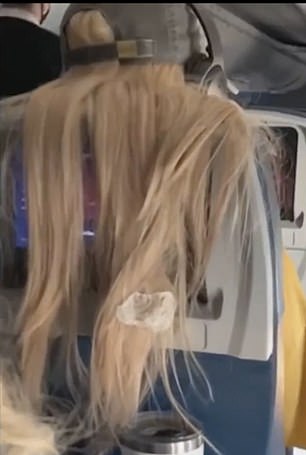 She then repeatedly flicks the hair back over the seat, only for the passenger to flick it back again, unaware of the damage done to her now matted hair.

The shocking footage was posted on TikTok on Friday and has been viewed millions of times, although many believe that it could be fake.

Despite, the spiteful actions of the furious passenger, many viewers sided with her.

One TikTok user called Hayden wrote: ‘At first I was with the lady in the front but after she kept throwing her hair back I feel like she got what she deserved.’

However people were quick to doubt the clip as one user pointed out the two passengers had the same hats on, suggesting they could be friends.

One woman named Julieanne wrote: ‘You would absolutely know someone is touching your hair.’

Others claimed it was a wig that the passenger was wearing and believed the whole thing was staged.

One person wrote: ‘Come on thats a wig! Totally staged! You think after she flipped it she didn’t feel all that stuff in her hair!’