Shocking footage shows a gang of masked thugs smash a Ford Transit van into a house before setting the vehicle on fire in the street.

The video shows the white van being rammed into the front of a house in Derry, Northern Ireland on Tuesday evening as men in balaclavas stand outside.

The vehicle crashes into the property several times causing considerable damage to the exterior.

Masked men are then seen running from the van to two getaway vehicles before a  second clip shows the white van in flames in the middle of the residential area.

They were uploaded online with the caption: ‘Gang of travellers attacking house, then blowing van up,’ but there is no indication any particular group was involved.

No arrests have been made with PSNI detectives are investigating, with some witnesses claiming a gun was fired as well. 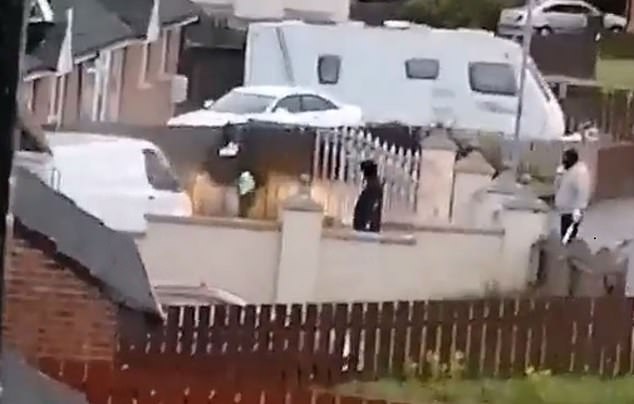 A white Ford Transit van is pictured reversing into a house with three masked men outside in Derry, Northern Ireland on Tuesday 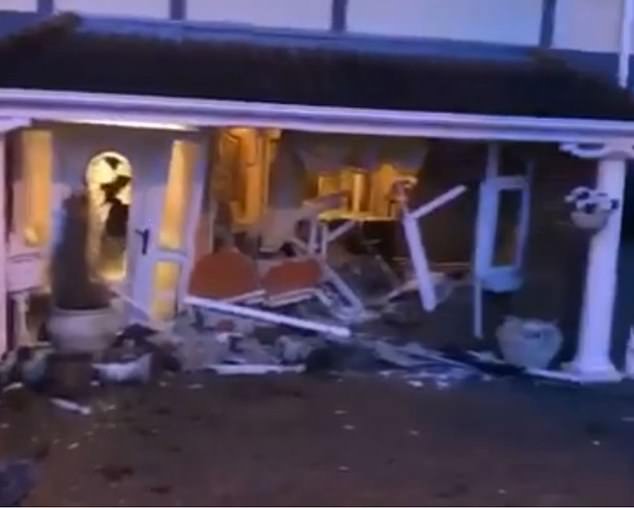 A still shows the damage done to the front of the house in Derry, Northern Ireland, after the van rammed into it several times

The video shows a group of hooded men standing by the white van shouting as it reverses into the house.

A woman can be heard saying: ‘What the f***? Are they robbing the house?’

The van drives forward a few metres before slamming back into the house.

The woman says: ‘Oh my god what the f***? Oh my god they are ramming the house with the van.’

A crashing sound is heard from the impact of the van, as the hooded culprits leave the driveway.

Two getaway cars, a red Ford Mondeo, and a green Toyota Avensis, line the road as they dump the van on the street. The woman is heard saying: ‘They are all f****** travellers.’

The men then escape in their getaway cars leaving the white van burning by the roadside. 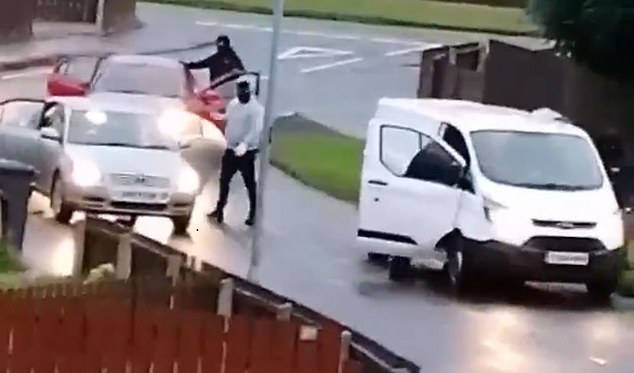 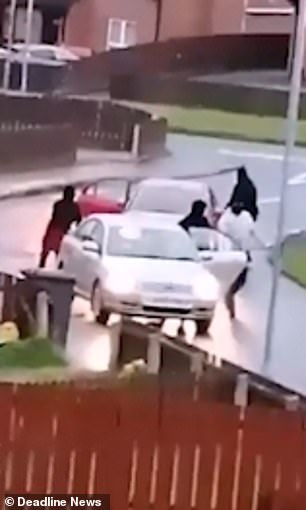 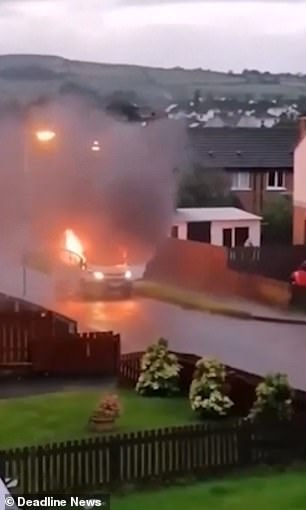 The gang of ‘scumbags’ are seen running towards two getaway vehicles in the quiet street in Derry, Northern Ireland on Tuesday evening (left), before the van is seen on fire (right)

Another video shows the extent of the damage caused to the house as firefighters attended the scene.

Both the front door and windows have caved in due to the repeated ramming of the van.

Police have appealed for information, describing it as a ‘reckless act.’

A spokesman for the Police Service of Northern Ireland said: ‘We received are report around 8.20pm that a white Ford Transit van was driven, several times, into a house, causing extensive damage.

‘The van was then set on fire on the road, and masked men are reported to have smashed windows at the property before fleeing in two other vehicles – a red Ford Mondeo and a green Toyota Avensis. 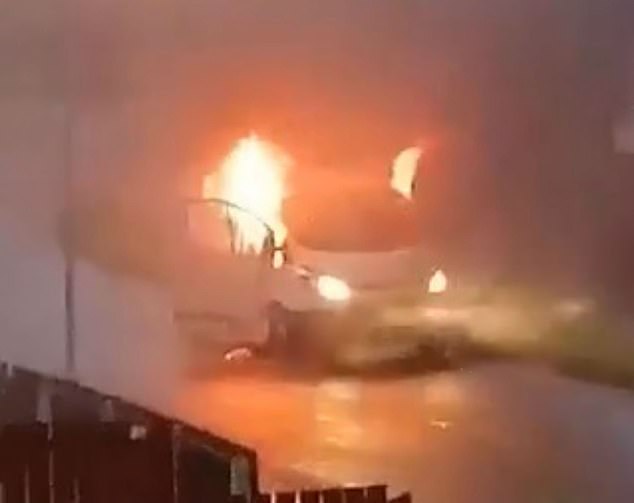 ‘Thankfully, no one was in the house at the time and there were no reports of any injuries.’

He added: ‘We are aware of a report that a shot may have been fired, however, our enquiries are at an early stage, and we are working to establish exactly what occurred and a motive for this completely reckless attack.

‘I want to make a number of appeals this morning, in particular about the movements of the white Ford Transit van, a red Ford Mondeo and a green Toyota Avensis.’

Social Democratic and Labour Party Councillor Brian Tierney said he was amazed nobody as killed in the incident.

Mr Tierney told local media: ‘It is important that these incidents stop and no-one attempts to seek revenge. We are very, very lucky that no-one was killed in this incident.’