More than 3.8million EU citizens apply to stay in the UK after Brexit transition period ends – with two million approved so far

More than 3.8million EU citizens have applied to stay in the UK permanently after freedom of movement ends – with two million granted approval so far.

Nationals from the bloc and their families must go through the Home Office’s settlement scheme by June next year to carry on living and working in the country after the Brexit transition period.

According to the latest figures, 2,041,200 people had been granted settled status up to the end of last month.

A further 1,475,500 were granted pre-settled status, where they will need to reapply again after living in the country for five years to gain permanent residence. 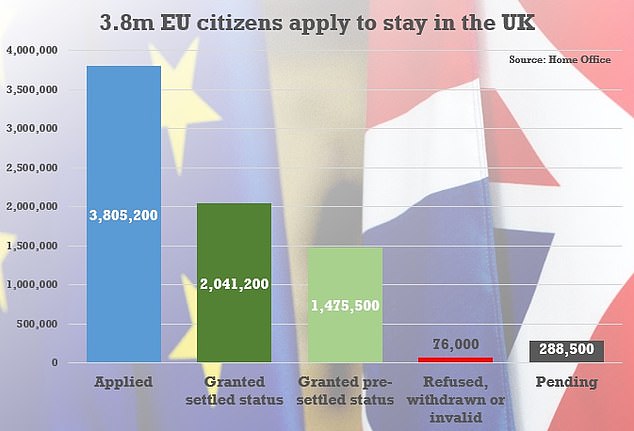 More than 3.8million EU citizens have applied to stay in the UK permanently after freedom of movement ends – with over two million granted approval so far

Some 4,600 applications were refused, 36,500 were withdrawn or void and 34,900 were invalid – where the Home Office decides someone is not eligible to apply or has failed to provide sufficient proof of residence.

The number of applications being submitted and processed dipped during the peak of the coronavirus pandemic.

‘There’s plenty of time left to apply before the June 30 2021 deadline and a wide range of support is available online, over the telephone and in person if you need it,’ he said.

But the Liberal Democrats repeated calls for EU citizens to be given an automatic right to stay in the UK and special documentation to avoid ‘a new Windrush-style scandal’.

The party’s home affairs spokeswoman Christine Jardine said: ‘With so many people being refused settled status, granted only temporary ‘pre-settled status’ or still waiting for a decision, it’s clear that this Conservative Government’s scheme is anything but automatic.

‘And without physical proof of their rights, EU citizens will be at the mercy of the Conservatives’ hostile environment. They must not become the victims of a new Windrush-style scandal.’

The next official quarterly figures on how the scheme is progressing are due to be published towards the end of the month. 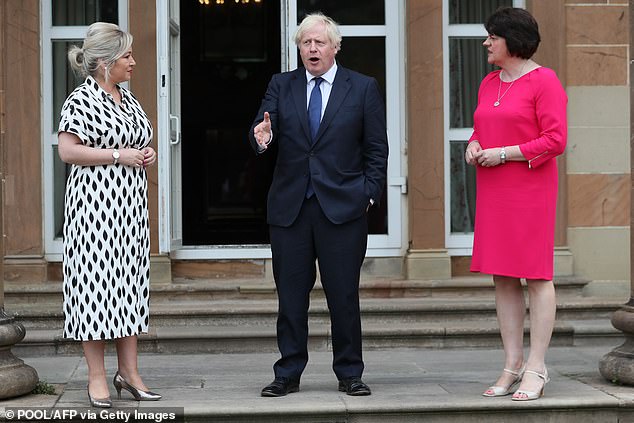 After Boris Johnson (pictured in Northern Ireland today) secured a Brexit deal, EU nationals and their families must go through the Home Office’s settlement scheme by June next year to carry on living and working in the UK