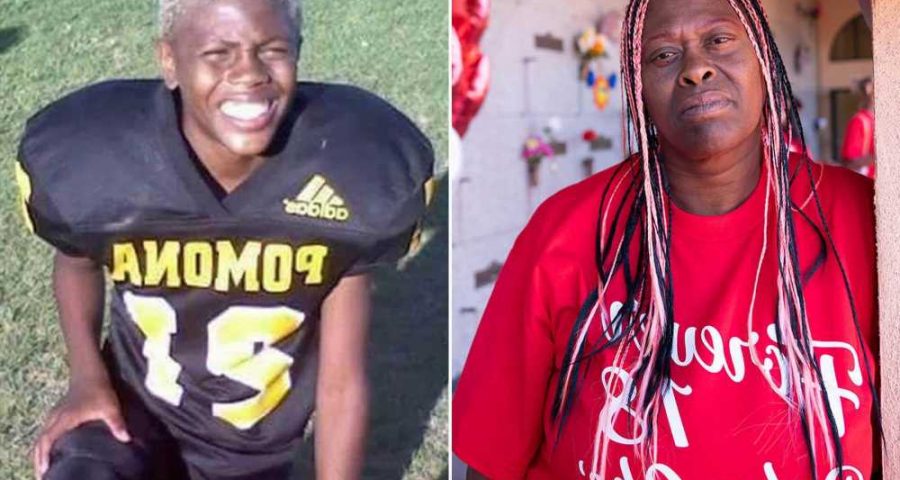 Woman who hit cops with car during NYC protests arrested

Grief-stricken mothers who have accused Black Lives Matter of profiting from the deaths of their sons condemned the group’s embattled co-founder Patrisse Cullors after she announced she was stepping down from the movement.

“I don’t believe she is going anywhere,” Samaria Rice, the mother of a 12-year-old boy shot by Cleveland police while playing with a toy gun, told The Post. “It’s all a facade. She’s only saying that to get the heat off her right now.”

Lisa Simpson, a Los Angeles-based mother whose son was slain by police in 2016, also blasted Cullors.

“Now she doesn’t have to show her accountability,” Simpson, 52, told The Post. “She can just take the money and run.”

Cullors, the executive director of the Black Lives Matter Global Network Foundation, announced on Thursday she was leaving the group a month after The Post reported on her $3.2 million real-estate buying spree and questions about the group’s finances.

Cullors did not respond to a request for comment. She has said her departure had been in the works for a year and was not tied to what she called “right wing attacks that tried to discredit my character.”

Rice, 44, told The Post she first sought out Cullors to enlist the group’s help in re-opening a federal investigation into her son’s 2014 death. She said she exchanged a few emails with Cullors over the years, but had never managed a face-to-face meeting.

“They are benefiting off the blood of our loved ones, and they won’t even talk to us,” said Rice, who has also blasted activists Shaun King and Tamika Mallory, whose speech at the Grammy Awards in March called on African Americans to “demand the freedom that this land promises.”

In March Rice joined with Simpson, the mother of Richard Risher, to blast BLM for, as Simpson put it, “raising money in our dead sons’ names and giving us nothing in return.”

BLM’s Los Angeles chapter raised $5,000 for her son’s funeral, but Simpson claimed she never received any of it.

“We never hired them to be the representatives in the fight for justice for our dead loved ones murdered by the police,” said the statement by Rice and Simpson posted March 16 by activist @Free Mumia Abu-Jamal. “The ‘activists’ have events in our cities and have not given us anything substantial for using our loved ones’ images and names on their flyers. We don’t want or need y’all parading in the streets accumulating donations, platforms, movie deals, etc. off the death of our loved ones, while the families and communities are left clueless and broken.”

Tamika Palmer, the mother of Breonna Taylor, who was shot dead in a police raid at her home in Louisville, KY, said the movement also failed her.

“I have never personally dealt with BLM Louisville and personally have found them to be fraud (sic),” Palmer wrote in an April 14 Facebook post that was quickly removed. Palmer did not return The Post’s repeated calls.

In addition to the mothers, BLM Global Network Foundation also faced criticisms from their own members last year. In an open letter, 10 local BLM groups ripped the foundation for what they called a lack of accountability and transparency.

“To the best of our knowledge, most chapters have received little to no financial support from BLMGN since the launch in 2013,” said the chapters, which included groups from New Jersey and the Hudson Valley.

A few months later, BLM Global Network Foundation disclosed that it had raised $90 million in donations, fueling even more criticism.

On Nov. 22, 2014, Tamir Rice was shot dead outside a recreation center while holding a toy gun by white police officer Timothy Loehmann, who was responding to a dispatch about a man with a gun. Last week, a lawyer for Loehmann filed an appeal with the Ohio Supreme Court to get his job back after he was fired in 2017 for providing false information on a job application.

Tamir’s mom started the Tamir Rice Foundation in 2017 to raise awareness of her son’s death and has been working with Cleveland attorney Subodh Chandra to re-open a federal investigation. The probe into the police officer who shot the youth was started under the Obama administration and shelved last year. “There was political interference and a questionable deal was cut,” Chandra told The Post. “Samaria Rice has been thwarted from having even a shot at due process much less justice for the murder of her son.”

Chandra and Rice said that they are hopeful the Department of Justice will greenlight their request after Attorney General Merrick Garland announced Monday a federal probe into police in Louisville who killed Taylor.

Risher died on July 25, 2016, after he was chased by police outside a Watts housing project. Police say that Risher produced a handgun. LAPD cops fired 64 rounds, according to reports. Simpson said she was encouraged by the Chauvin verdict and the federal probes, and told The Post she is lobbying for the same treatment for her own son.

“He was shot for running while black,” said Simpson, adding that she started the Richard Risher Foundation to raise funds for her own protests when she said BLM activists failed to help her.

“They called me an agent provocateur, a liar and crazy,” she said, adding that she would regularly show up at LAPD Commission meetings to demand justice for her son. “I am the boots on the ground in this fight, not Black Lives Matter.”

Last month, Simpson engaged in another protest — this one at her son’s grave at Inglewood Park Cemetery in Los Angeles on April 29, what would have been Risher’s 23rd birthday.

“I’m just a mother who lost my kid,” she told The Post. “I haven’t gotten any justice and I don’t even know what that looks like.”