Drivers across the UK will be plagued by potholes this winter after a number of authorities failed to make sufficient repairs on their A-roads in the last two years.

Figures from the Department for Transport and Research, which were analysed by the AA, showed only six per cent of councils in England had repaired the potholes on their A-roads between 2018-2019 and just 32 per cent of roads had been resurfaced.

Meanwhile Blackpool council, which earlier this year became the first in the UK to use satellite image to identify craters in the roads, and Blackburn and Darwen Council had repaired less than one per cent of damages to their roads from 2018-2019.

It comes after data revealed that potholes had cost the UK’s councils more than £3.7million in compensation in the last 18 months. 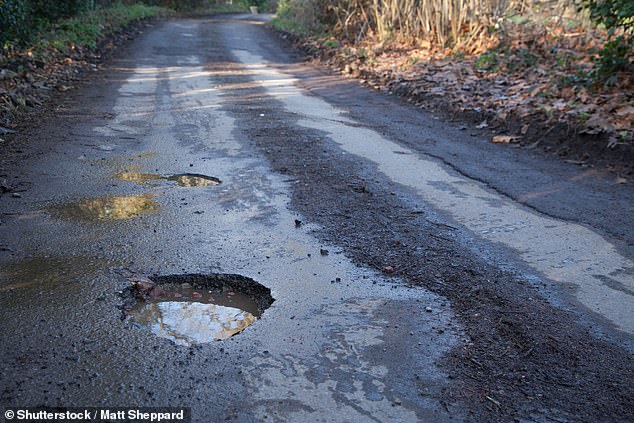 Drivers will face potholes this winter after a number of authorities failed to make repairs on their A-roads. (Stock image)

AA president Edmund King said: ‘These new Government statistics show just how vast is the difference between councils when comparing the amount of road repairs they carry out.

‘They suggest that, for quite a few local authorities, a bad winter will quickly lead to a plague of potholes.

‘This year’s ALARM survey said that £9.64 billion needs to be spent by English road authorities to bring roads up to an acceptable standard. These latest statistics now suggest some councils make a lot more effort than others.

‘Poor road repairs can also result in a lack of skid resistance – leading to vehicles not stopping in time or loss of control. The government’s most recent road condition report showed that 28 per cent of the road network for which councils are responsible has skid resistance that may not do its job.

‘Pot-holed pavements and roads can also be dangerous for those currently being encouraged to walk and cycle more, as well as for motorbike riders.

‘For those on four wheels, potholes can cause costly damage to tyres, wheels and suspension – leading to compensation claims and a needless drain on council finances.’

Date analysed by the AA found between 2018-2019 Blackpool Council repaired 0.08 per cent its A-roads, Blackburn and Darwen just 0.13 per cent and Slough and Redbridge 0.4 per cent.

Figures also showed Richmond upon Thames Council had repaired just 1.20 per cent of the potholes on its minor roads and Redbridge Council 1.40 per cent.

In April, the AA called on local authorities across the country to resurface their residential roads and streets while the roads were quiet amid the national lockdown.

Edmund King, the AA’s president, previously said: ‘Hitting a pothole for the extra families taking to the streets on foot and cycling isn’t just bump to the car, but a potential injury and may be a trip to hospital – which is exactly what the lockdown is trying to prevent.

‘Spending on residential road maintenance may have increased in 2018-19 but it remains way behind the spending before the financial crash.

‘Even then, councils struggled to keep up their maintenance schedules and the road rot had already started to set in.

‘With daily road traffic down as much as 60 per cent, the lockdown and the long dry period this month has provided an ideal chance to get to grips with potholes – whilst still observing social distancing. 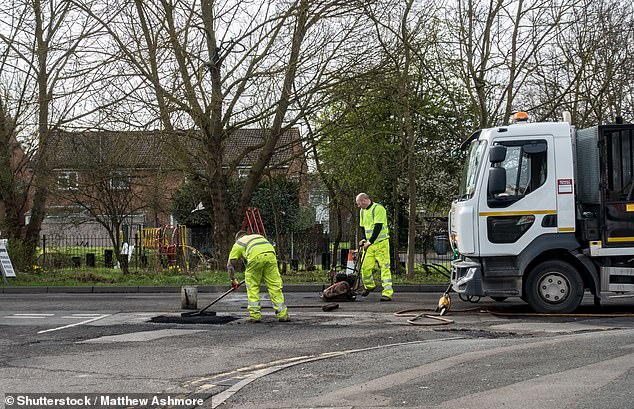 Figures showed only six per cent of councils in England had repaired the potholes on their A-roads between 2018-2019. (Stock image)

‘Some councils, like Shropshire, have seized that opportunity, the rash of weekly complaints elsewhere suggest others haven’t.’

It came after figures from the RAC show the breakdown company received 1,766 call-outs for vehicles damaged by faulty road surfaces between April and June this year.

Transport Secretary Grant Shapps said the programme, which forms part of the Government’s £2.5 billion pledge to fund pothole repairs across England, would help make roads ‘safer for everyone’.

He said: ‘We’re teaming up with delivery companies, who know the roads well, in order to map out where remaining potholes exist and then relentlessly target them with our record £2.5 billion pothole repair fund.

‘Better road surfaces benefit motorists and cyclists alike, ensuring the back to school and work environment is safer for everyone.’

Pothole repairs carried out by councils in England between 2018-2019

Blackburn and Darwen Council – 0.13 per cent

Slough and Redbridge- 0.4 per cent

Richmond upon Thames Council  – 1.20 per cent

Newcastle upon Tyne Council – 1.40 per cent