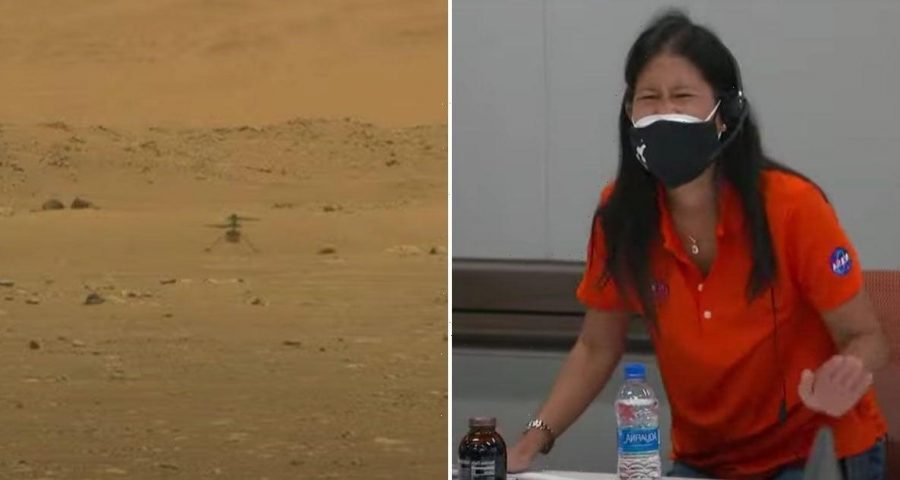 NASA’s Perserverance Rover is no longer alone on Mars. On Monday, April 19, NASA’s helicopter operations team gathered at the Jet Propulsion Laboratory in Southern California to witness the first successful helicopter flight on Mars. The four-pound aircraft, aka Ingenuity, autonomously performed the flight less than two months after hitching a ride on the Perseverance rover, which landed on the surface of Mars on Feb. 18. “Our team has been working on the Mars helicopter for over six years, and for some even longer, towards this ultimate dream of experiencing the first flight on Mars. Here we are!” said Ingenuity Project Manager, MiMi Aung in the livestreamed video of the flight above.

The flight is even more impressive given that Mars’s atmospheric volume is less than one percent of that on Earth, creating a low air density that makes flying even more difficult. “When there is that little atmosphere, the rotor system has to spin really fast,” Aung added. “In fact, it will be spinning over 2,500 revolutions per minute for this flight today.” But Ingenuity was designed with this challenge in mind, along with the ability to keep itself warm in Mars’s freezing temperatures, usually averaging negative 80 degrees Fahrenheit.

“We have sent five rovers to Mars and now we have an aerial dimension,” said Ingenuity Mechanical Engineer Taryn Bailey ahead of the flight. “It’s really important because it elevates the next stage of space exploration. We can do more science with it; it can be a coordinated effort for future missions. It also opens the door for human exploration, and the helicopter can go into areas where the rover can’t.” Moving forward, NASA’s helicopter operations team hopes to use the data collected by Ingenuity to inform future generations of engineers designing aircrafts intended for space travel.

After witnessing the historic moment take place more than 100 million miles away, Aung raised her arms in victory and joined her fellow engineers in celebrating the extraordinary moment. “We can now say that human beings have flown a rover craft on another planet,” Aung told her team amid cheers and applause. “We have been talking so long about our Wright brothers’ moment on Mars, and here it is.”