Nearly one in 12 of 16 to 24-year-olds now identify as lesbian, gay or bisexual – almost double the number four years ago, figures show

More young adults than ever in the UK are now identifying as lesbian, gay or bisexual (LGB), new figures show.

The proportion of 16 to 24-year-olds who are LGB has almost doubled in four years and now stands at nearly one in 12.

The rise reflects ‘an increasing trend for this age group since 2014,’ according to the Office for National Statistics (ONS). 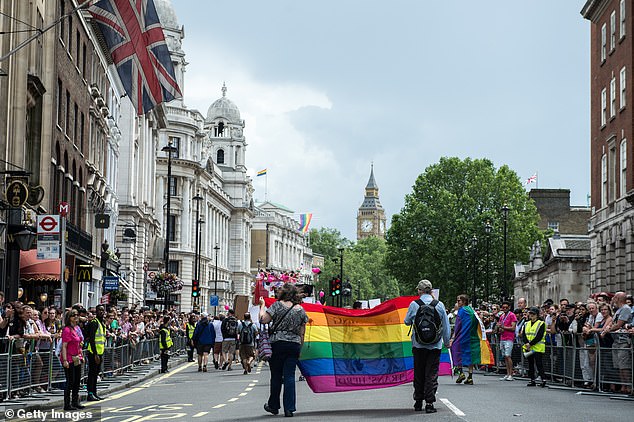 Nearly one in 12 people aged 16 to 24 now identify as lesbian, gay or bisexual, an all time high following a continuous upward trend since 2014 (pictured: London Pride)

The statistics from ONS show that young people in the UK are increasingly identifying as LGB, with the percentage of those who do increasing by more than double in five years 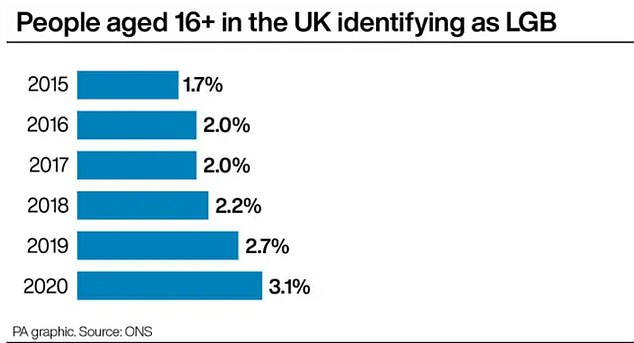 For people aged 16 and above in the UK the same upward trend can be seen, with close to double the proportion of people now identifying as LGB in 2020 compared to in 2015

A further 3.4 per cent said they didn’t know or refused to answer.

The estimates have been published by the ONS using data from the Annual Population Survey, which collects information on sexual identity from the household population aged 16 and over in the UK.

In contrast, the percentage for adults identifying as heterosexual or straight has seen ‘a decreasing trend’ since 2014 when it was 95.3 per cent, and now stands at 93.6 per cent .

London had the highest regional proportion of adults identifying as lesbian or gay (2.9 per cent) or bisexual (1.7 per cent) in 2020, while eastern England had the lowest (1.3% and 1.0% respectively).

The survey focused exclusively on sexual identity and no data was collected for those who identify as transgender, or non-binary.

A similar poll, which did include those who identify as transgender, for Americans found 5.6 per cent of their population – or 18 million people – were LGBT+.