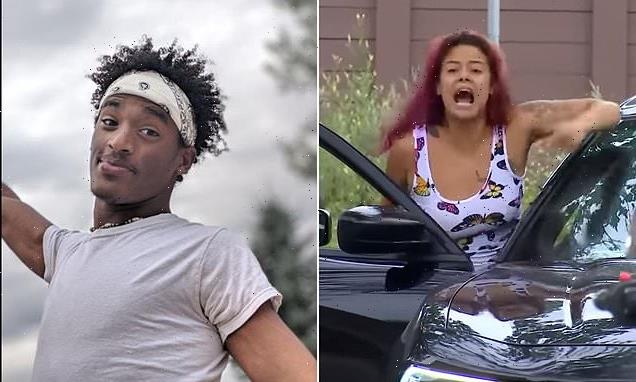 ‘This is not a George Floyd situation. George Floyd was unarmed’: Neighbor of black Minneapolis man, 20, who was shot dead by police after six-hour stand-off berates Black Lives Matter protesters gathered outside her home

A Minneapolis mother berated Black Lives Matter protesters in the aftermath of the shooting of her Black neighbor.

Andrew ‘Tekle’ Sundberg, 20, was shot dead by police snipers in the city last Thursday following a stand-off.  He was killed on his mother’s birthday.

The slain man’s family maintains that he was experiencing a mental health crisis when he was shot.

During a protest at the scene of the shooting on Saturday, Arabella Foss-Yarbrough drove up to protesters and yelled: ‘This is not a George Floyd situation. George Floyd was unarmed. This is not okay.’

According to the mother-of-two, she was cooking in her home on Wednesday night when Sundberg, who lived on the same floor, began shooting at her apartment.

Photos showed the bullet holes that ripped through her front door and bathroom mirror. Her children were unharmed in the attack.

In the wake of Sundberg’s death, Black Lives Matter protests have started again in Minneapolis.

Foss-Yarbrough took issue with protesters saying: ‘My kids have to deal with this and probably have a mental illness now because they almost lost their lives. There’s in my kitchen because he sat in the f**king hallway watching me move.’

She continued: ‘He tried to kill me in front of my kids,’ adding: ‘I have black children; I am a woman of color! If I would have lost my life, would you guys do this for me?’

The victim’s father, Mark Sundberg was also among the protesters and apologized to Foss-Yarbrough for his son’s actions.

To which she responded: ‘This is not okay,’ according to the Minneapolis Star-Tribune. 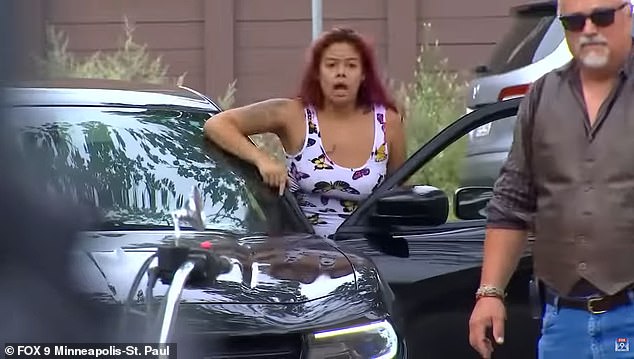 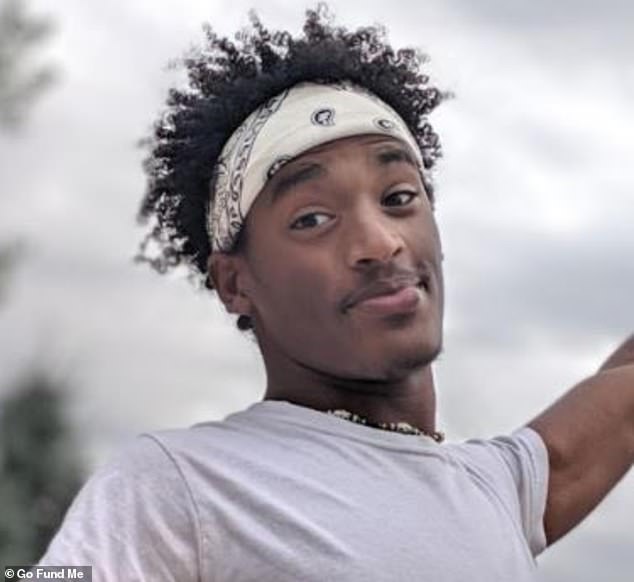 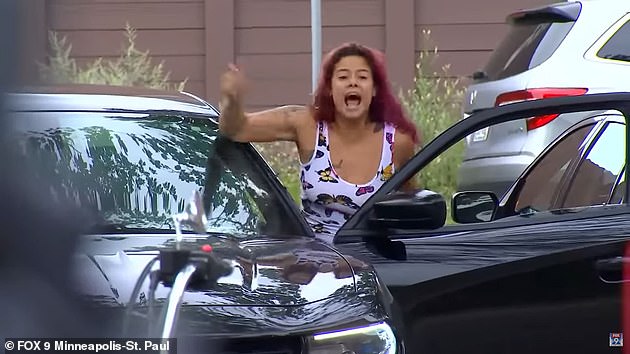 According to a GoFundMe page, Foss-Yarbrough has lost her job in the wake of the shooting 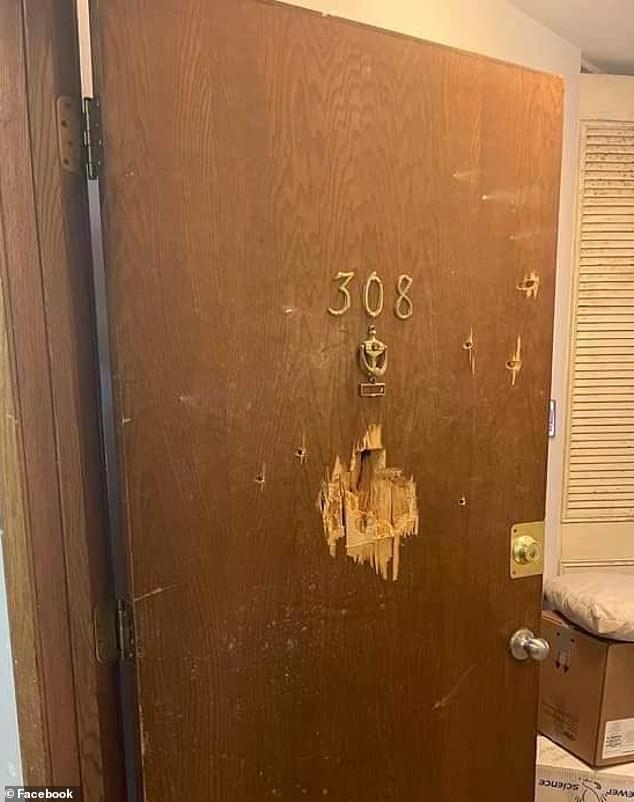 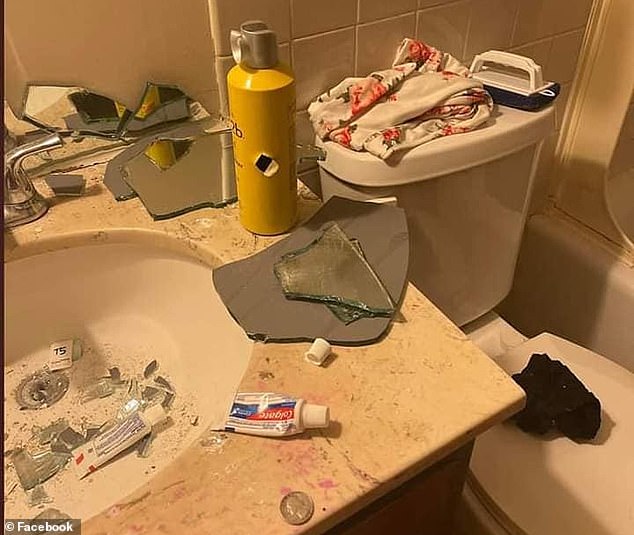 Foss-Yarbrough said in an interview: ‘This man intentionally tried to kill us’ 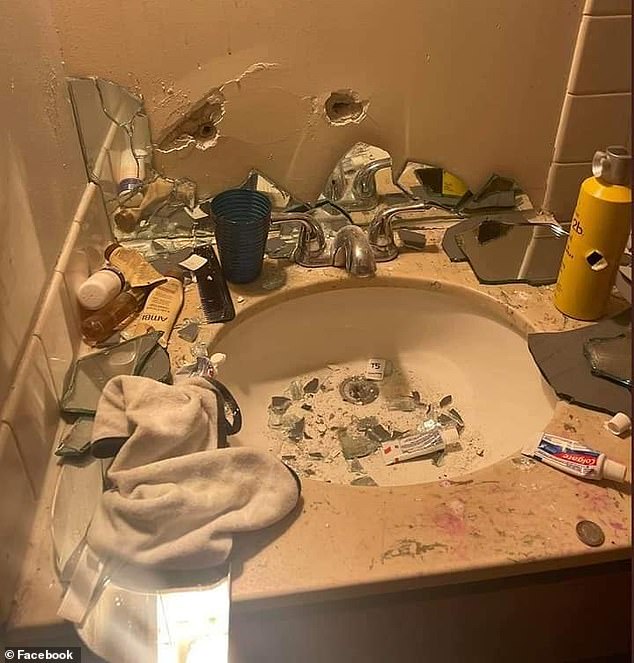 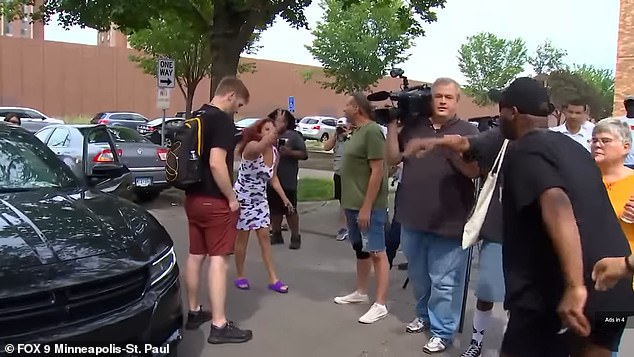 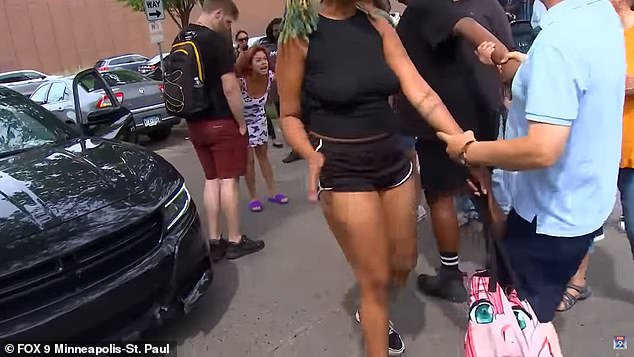 The victim’s father, Mark Sundberg, said: ‘My heart goes out to that woman (Yarbrough). She went through a very traumatic event with those bullets coming through her house’

Speaking to Fox9, Mark Sundberg said: ‘My heart goes out to that woman (Yarbrough). She went through a very traumatic event with those bullets coming through her house.’

He added: ‘It’s two different incidents. It’s the shots going through her (wall) and what we are here for, when Tekle was shot.’

The two officers who fired on Sundberg have been named as Aaron Pearson and Zachary Seraphine.

In February 2022, Pearson was a member of the SWAT team that was involved in the fatal shooting of Amir Locke. 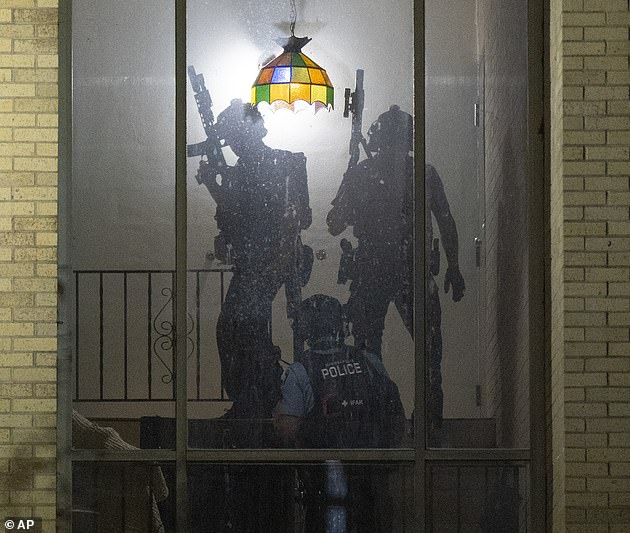 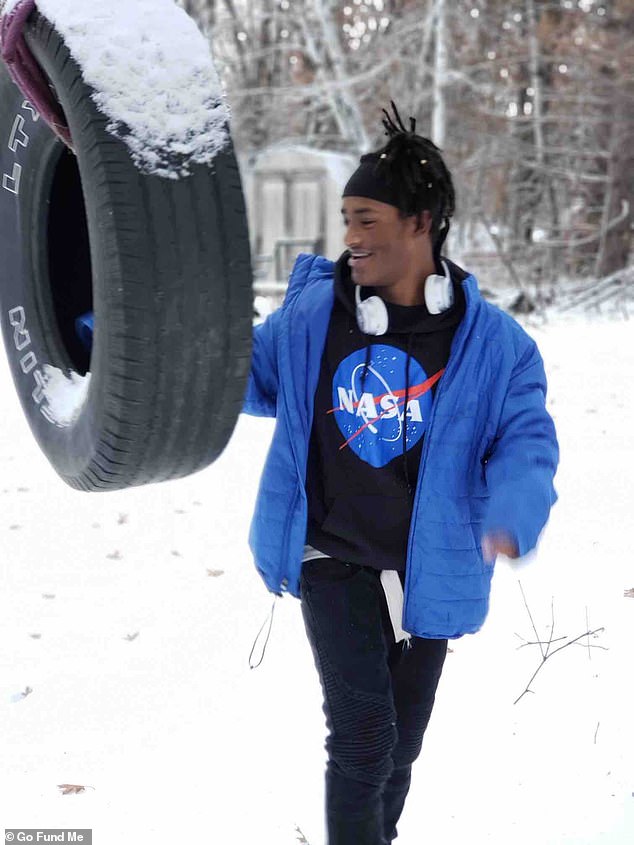 Sundberg’s mother told the media on Saturday: ‘Tekle was an imperfect human — we’re all imperfect humans — and he did not deserve to be picked off like an animal from the rooftop’ 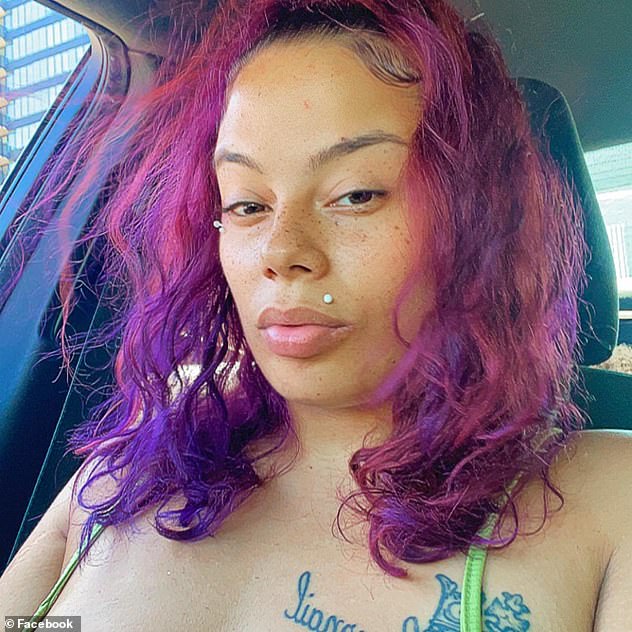 Fox-Yabrough described the horrific incident saying: ‘I literally had five minutes to live while he had six hours to choose life or death. The police stated they did not want to kill him’

The family’s lawyer, Jeff Storms said: ‘We can do both things. We can feel terribly for this woman, but also remember that Tekle should be here with us and he should be alive and we can ask the Minneapolis Police Department to do better.’

While Fox-Yarbrough told the station: ‘I literally had five minutes to live while he had six hours to choose life or death. The police stated they did not want to kill him.’

She went on: ‘That man was armed. George Floyd was not armed. Breonna Taylor was not armed. Amir Locke he was armed and he had his own guns but they came into his home while he’s licensed to carry and killed him. He did not…fire. This man intentionally tried to kill us.’

The victim’s mother, Cindy Sundberg, said at a press conference: ‘I wish I could wrap my arms around her and tell her I am so sorry. Tekle was an imperfect human — we’re all imperfect humans — and he did not deserve to be picked off like an animal from the rooftop.’

It was Foss-Yarbrough who initially called the police on Sundberg. Responding officers removed her and and her children from the scene. According to police, while they were evacuating the building, Sundberg began firing on them.

That prompted a six-hour standoff. It came a dramatic end when police snipers shot Sundberg dead around 4:30 a.m. Officials have not said what action prompted the officers to open fire. 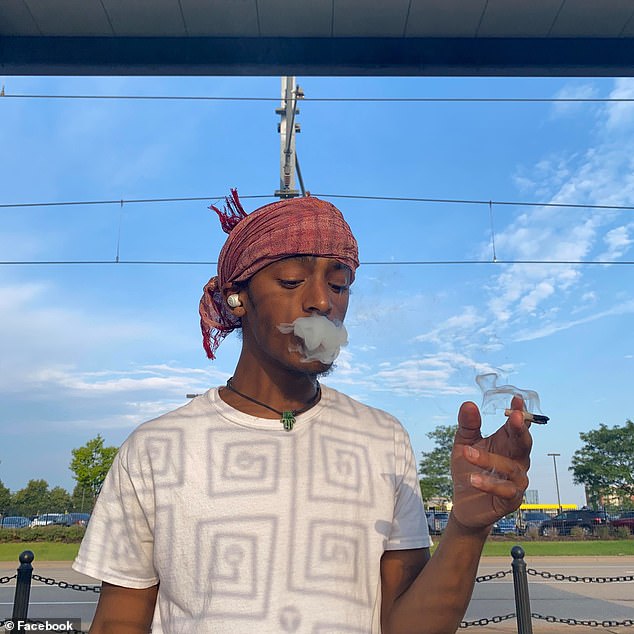 According to police, while they were evacuating the building, Sundberg began firing on them

The snipers were perched on a roof across the street from where Sundberg was holed up.

The victim’s parents say that they were not allowed to communicate with their son during the standoff.

The body cam footage of the shooting will be released this week, reports the Star-Tribune.

Sundberg, a native of Ethiopia, was adopted at the age of four by his parents.

He was one of eight children, three biological and five adopted.

A GoFundMe page has been set up for both Foss-Yarbrough and Sundberg.

At the time of writing, the crowdfunding page for the Minneapolis mother has raised more than $29,000 while Sundberg’s page has raised less than $20,000.

The blurb on Foss-Yarbrough’s GoFundMe page says that on the night of the shooting she spent hours ‘holding her small children tightly after narrowly escaping her apartment as her neighbor who lived across the hall stalked her movement through the wall and opened gunfire into her apartment.’

According to that page, Sundberg had been harassing Foss-Yarbrough for months prior to the shooting.

Since the incident, she has lost her job and has been unable to return to her home.

In addition to Storms, the Sundberg family is also being represented by Ben Crump, who represented George Floyd’s family following his death at the hands of police in Minneapolis in 2020.

Kesley Sundberg, the victim’s sister, said at a press conference: ‘A mental health crisis should not be a death sentence. It doesn’t give police the right to perform an execution.’ 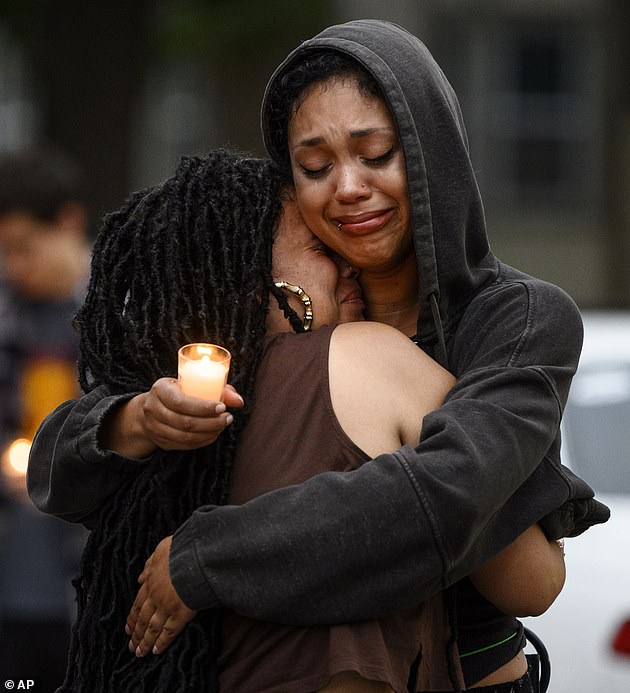 Two mourners who were close to the family, and who didn’t wish to be identified, embrace during a vigil for Sundberg 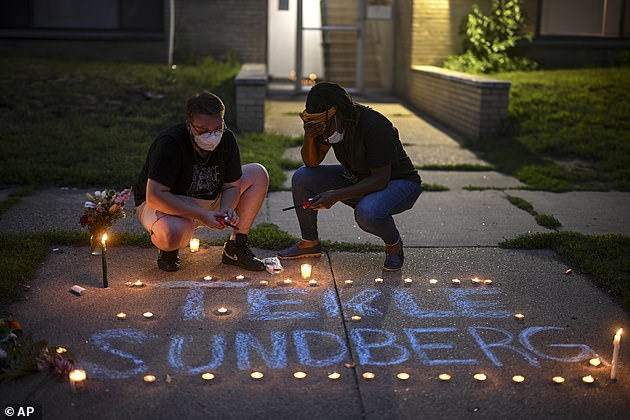 Marcia Howard, activist and George Floyd Square caretaker, right, takes a moment as she lights candles during the vigil

UPDATE: Family says Police denied their requests to intervene in fatal stand-off. A 20-year-old man was fatally shot on his mother’s birthday by Minneapolis Police officers following a 6-hour stand off at his apartment. Tekle’s parents say they were denied the opportunity to intervene. “He was in a mental health crisis. He needed help,” says Cindy Sundberg. Cindy and her husband Mark, who are white, adopted Tekle from Ethiopia when he was four. Cindy believes if it had been one of her biological children having a mental health crisis the outcome would have been different. “Everyone knows had it have been a white person in that situation they would have talked them out. People who go in and shoot massive amounts of people are arrested safely and alive if they’re white. If they’re not white we know the outcome they’re dead. It’s all about the lack of humanity of a Black body and it’s wrong it has to stop.” Cindy and Mark were allowed to go to the scene during the standoff. While there they made several attempts to ask police if they could go to their son’s door or to his window to help de-escalate the situation. “I could have gone to that door within the first ten minutes that we got there and this wouldn’t have happened,” says Mark whose wife says that every time they got a chance to speak to Tekle the police instructed them of what they could and could not say. The city of Minneapolis published a 28 page incident report with details about what happened however, 25 pages are redacted. The BCA is currently investigating the case. The family is being represented by Attorney Jeff Storms. A rally will be held for Tekle 3pm on Saturday in front of his apartment on the 900 block of 21st Ave.

She also took issue with the police characterizing her parents as having a dialogue with officers at the scene saying: ‘They were restricting their access to him. They would not let him close. My dad told them, he said, ‘I can end this. I can end this in 10 minutes.’

At the same press conference Cindy Sundberg said: ‘The police are portraying it and the mayor is portraying it like we collaborated and police were all kind and loving to our family as they tried to help Tekle. That is a lie. They were not.’

Protester Lavish Mack told the Star-Tribune that if Sundberg ‘was a white person he wouldn’t have been killed, and they would have had consideration and valued his life.’

During the standoff, Cindy Sundberg said that the family were kept in a caged area and were unable to communicate with their son.

Mark Sundberg said that he was told by officers at the scene that his son would not be shot and that officers were preparing to use rubber bullets. He said: ‘I was starting to believe them. I thought: ‘Maybe they’ve changed.’ But, no.’

Through tears, Mark Sundberg said that he should be celebrating his wife’s birthday this weekend at a barbecue rather than mourning his son.

At the Saturday protest, a speaker said of Sundberg: ‘Tekle was loved. Tekle was a good person. Tekle was going through a manic breakdown.’