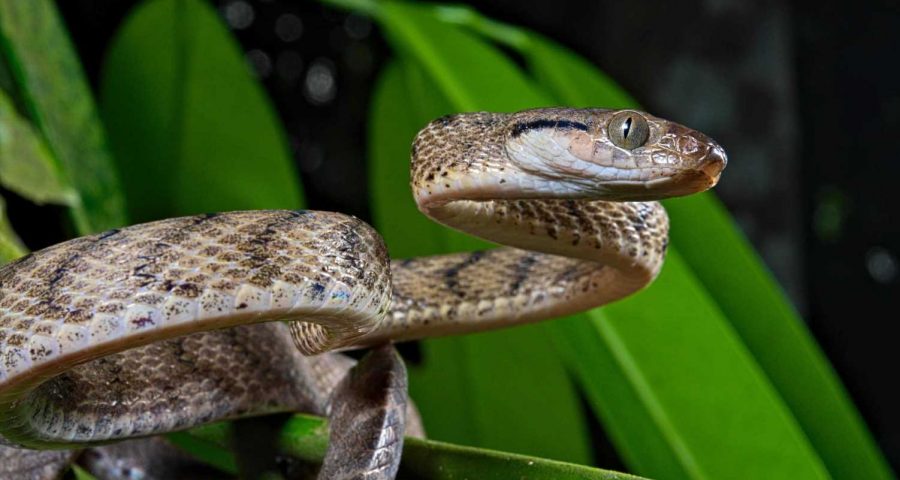 A NEIGHBOUR found an alarming note saying that four snakes were on the loose in the block of flats where he lived.

The neighbour added that on finding the terrifying warning about the escaped pets, he wanted to "burn down" his own flat. 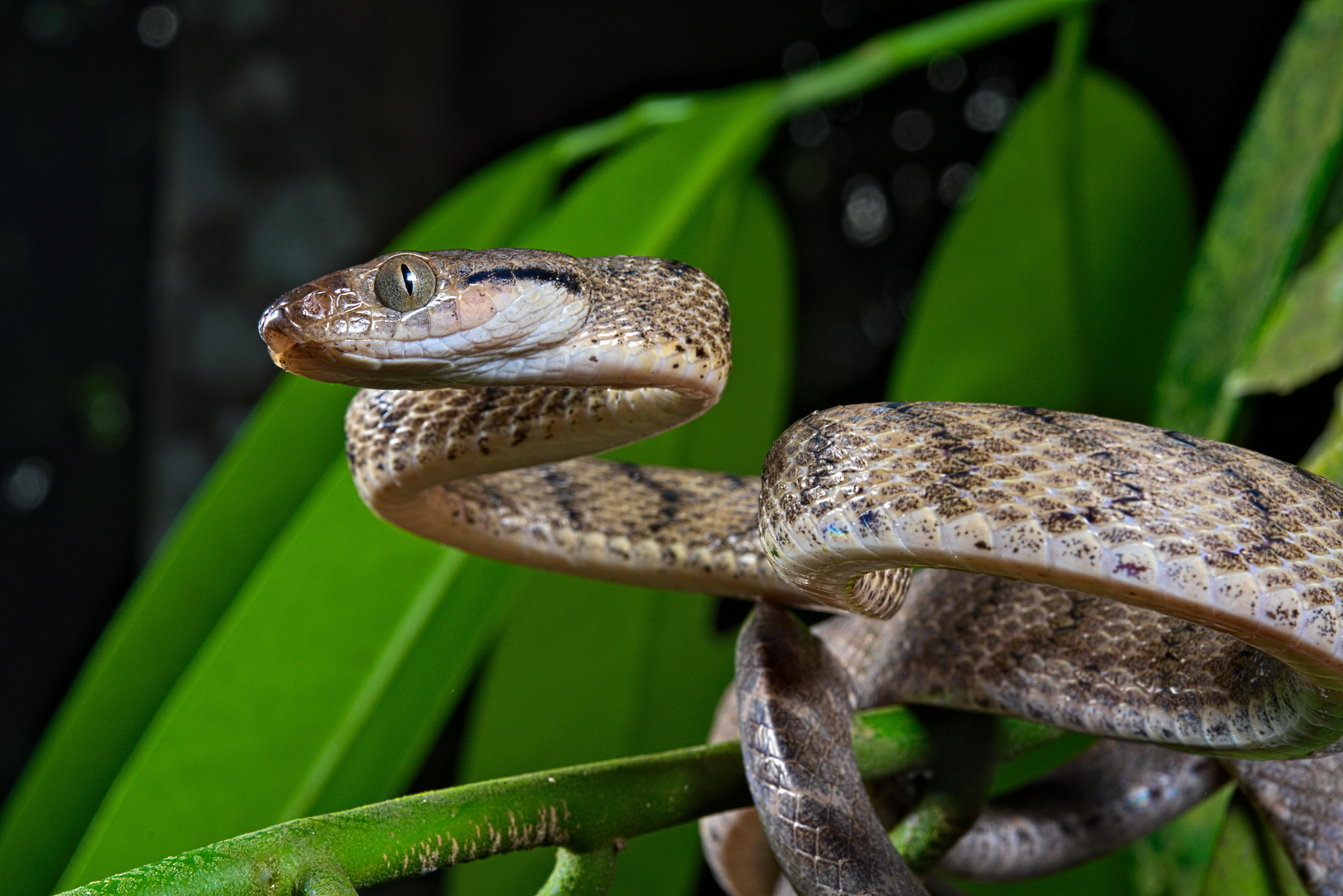 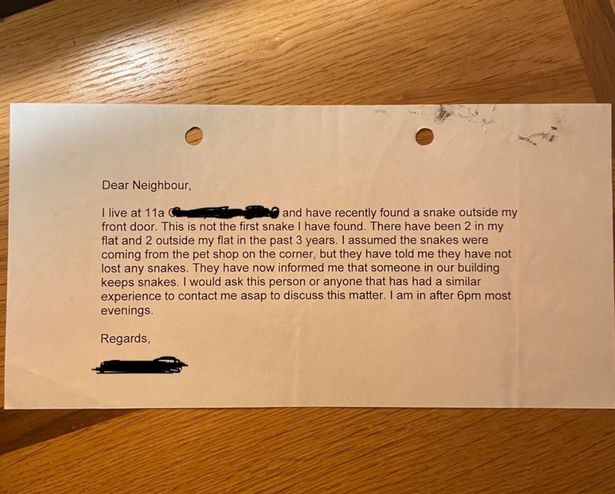 The neighbour initially thought the snakes could be coming from the local pet shop, but after three years of finding the rogue snakes around the flats, it turned out to be another neighbour who was keeping them.

A picture of the message was shared with the caption: "Right, OK. Sleep well. Have a good weekend," as it clearly left the recipient, and plenty of others on Reddit, feeling a little freaked out.

The message reads: "Dear Neighbour, I live at 11a and have recently found a snake outside my front door. This is not the first snake I have found. There have been 2 in my flat and 2 outside my flat in the past 3 years.

"I assumed the snakes were coming from the pet shop on the corner, but they have told me they have not lost any snakes.

"I would ask this person or anyone that has had a similar experience to contact me asap to discuss this matter. I am in after 6pm most evenings."

After the post was shared online, others did very little to reassure them about the situation, as one produced some made up statistics to increase the fear, writing: "I wouldn't worry. Most snakes can flatten their vertebrae and shuffle under most doors with ease.

"Whilst many are not violent, all have teeth. Razor sharp teeth to be precise. According to a recent survey, 84 per cent of snakes said they would bite the f*** out of a sleeping neighbour. Can I have your shoes when you're dead?" – to which the recipient replied: "No, because I’m going to burn my flat down instead."

A second wrote: "It doesn't sound like he's keeping snakes though. Releasing them yes. Keeping them. Not so much…"

And others were rightly genuinely concerned for the animals too, as another suggested: "This sounds like potential cruelty to those snakes – if they're tropical pets releasing them is really not good, for the snakes or for the wildlife, and if they're careless enough to let them escape that's worse. Maybe they want to be contacting the RSPCA or similar?"

In Australia, a family were left terrified after 50 snake skins were found in their loft – but the deadly predator hiding in their house could not be found.

During a routine roof inspection of the family home located in Rocksberg, near the Sunshine Coast in southern Australia, a snake catcher made the grisly discovery. 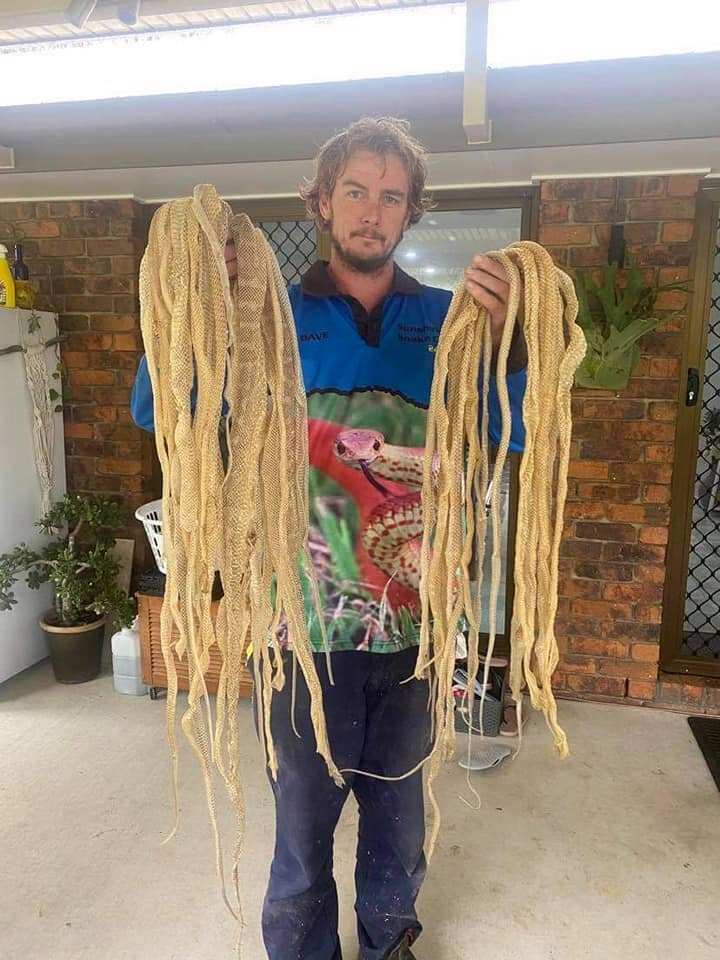 After popping his head into the family's roof expecting to find a serpent slithering around, Dave from Sunshine Coast Snake Catchers was shocked to instead spot up to 50 snake skeletons lurking in the darkness.

In a Facebook post sharing the hair-raising haul, the snake catchers explained, "He brought down over 30 snake skins out of the family’s roof space, and there was probably another 20 skins up there."

But unfortunately for the homeowners, the lengthy-looking predator was nowhere to be seen.