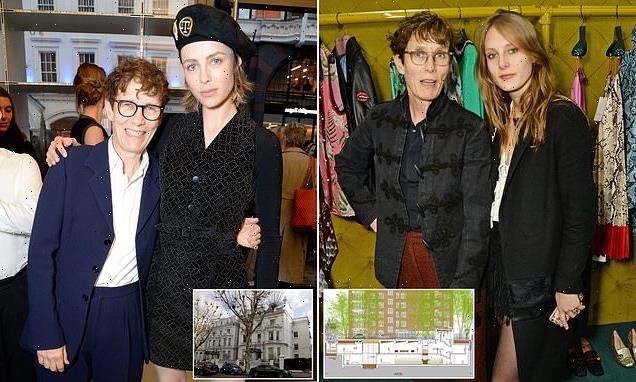 Traditionalist neighbours have won a £2million court fight to block a top architect from building a ‘glowing’ glass entrance to her ultra-modern underground house next to their Victorian homes.

World-renowned architect Sophie Hicks has been left with a £1.3m court bill after losing a six-year-long battle with seven neighbours, sparked when she got planning permission to construct a cutting-edge underground house, featuring a ‘gently glowing’ glass box at street level in 2015.

The neighbours, spearheaded by pensioner Maria Letemendia, 71, said they wanted to stop the new building next to their flats in a Victorian villa in Holland Park, London, for ‘aesthetic’ reasons, stating through their lawyers: ‘We do not all want to live next door to the creative and interesting.’ 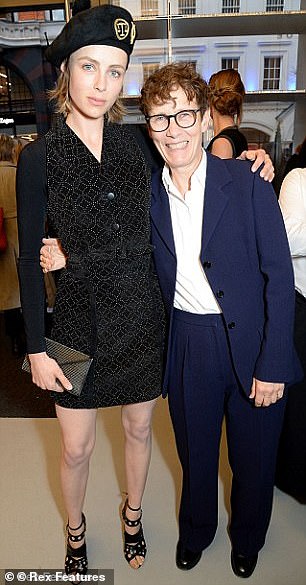 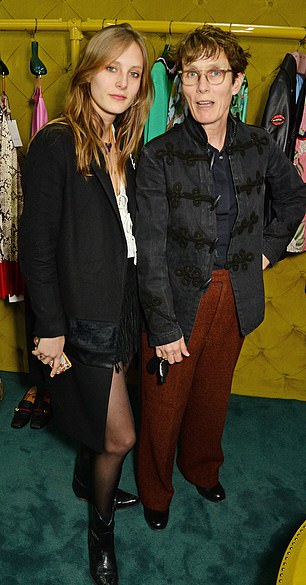 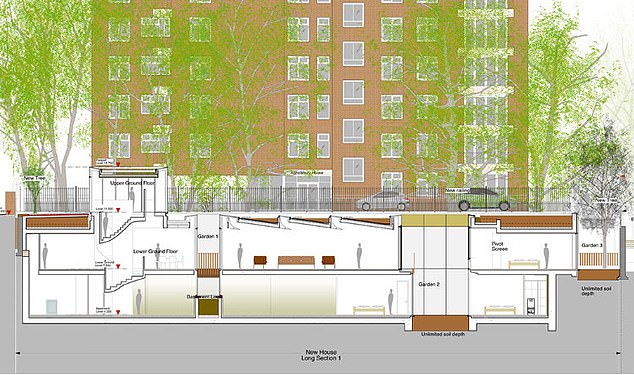 In 2019, a judge said they had no right to block the development due to matters of taste, leaving the neighbours’ company – which owns the freehold of their villa – facing legal bills of around £1m.

But they appealed and last year won a ruling that ‘aesthetic reasons’ allow them object to Ms Hicks’ house, simply because they don’t like how it looks.

‘A neighbour has a legitimate interest in the appearance of what is built next door to him,’ said Lord Justice Lewison, sending the fight back to be reheard at the High Court.

And today Judge Mark Pelling handed victory to the neighbours in the battle of aesthetics. He said: ‘I accept that a reasonable person in the position of the defendant could have refused permission for the fully glazed design.’

He also upheld the neighbours’ objection to Ms Hicks’ planned house extending beyond the back wall of their building and ordered her to pay £540,000 of their legal costs, as well as her own lawyers bill of over £775,000, leaving her more than £1.3m out of pocket. 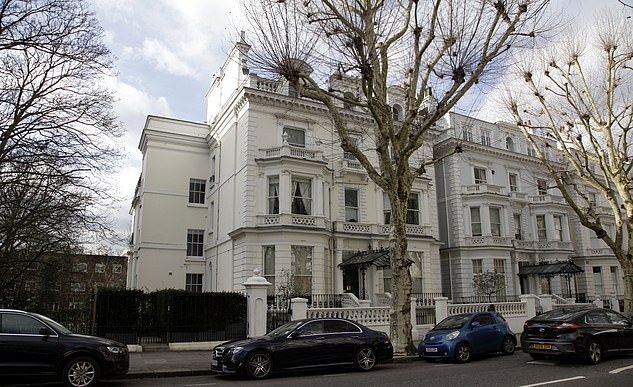 Ms Hicks, who is mother to two model daughters, Edie and Olympia Campbell, was given council planning approval for her subterranean house in 2015, having bought the building plot in 2011.

She planned to live in the house with other members of her extended family, but the face-off with her neighbours at 89 Holland Park meant work could not commence.

The company holds the power to veto building on the adjoining land due to small print included in the contract when the plot was sold in the 1960s.

But in an earlier court clash between the neighbours and Ms Hicks in 2013, a judge ruled that power must only be exercised ‘reasonably’. 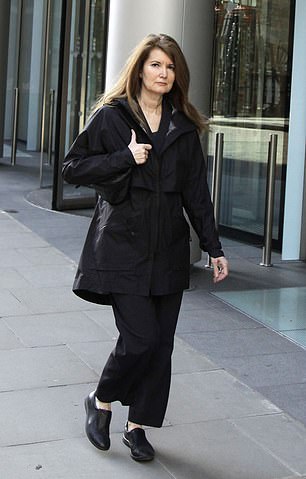 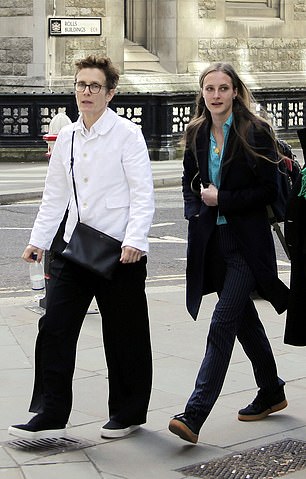 Ms Hicks (right with daughter Olympia) had hoped to build a cutting-edge underground house in Holland Park, but the development was contested by seven neighbours led by Maria Letemendia (left)

At the trial in 2019, Judge Pelling found that the rejection of Ms Hicks’ plans was ‘unreasonable’, finding crucially that the company only, rather than the neighbours as individuals, had inherited the power to veto the next door development.

The judge found that, as a company, 89 Holland Park (management) Ltd does not have rights which would ‘entitle it to refuse approval based on aesthetics.’

But the neighbours appealed, and the Court of Appeal last year found that Judge Pelling had got it wrong in holding that the ‘aesthetic impact’ of the house could not be taken into account when deciding whether or not to block the development.

Giving judgment today, having heard the case a second time, Judge Pelling found it was not reasonable for the neighbours to refuse permission on grounds of disruption caused by the construction or in order to protect the trees on the site.

Sophie Hicks, 60, began a career in fashion at 17 – when she was hired as a guest editor for the first teenage issue of Harper’s & Queens.

She remained in fashion for more than 10 years, during which time she acted as fashion editor for Tatler and British Vogue.

At 28, Hicks returned to education and studied to become an architect at the Architectural Association in London.

She qualified as a chartered architect in 1994, and has since designed prominent buildings such as Paul Smith’s flagship store in London.

Hicks went on to design buildings for Yohji Yamamoto, Chloe and The Royal Academy of Arts.

She was Vice President of the Architectural Association Council from 1997 to 1999.

Last year, Hicks was awarded a RIBA London Award for a new build house in the Earls Court conservation area of central London.

Hicks has built a series of other contemporary homes across the capital, including in Regent Square.

But he ruled that the neighbours, through their company, could reasonably object to the ‘glowing glass box’ design entrance hall, as well as the extension of the house beyond the back of their own properties.

‘I accept that a reasonable person in the position of the defendant could have refused permission for the fully glazed design since alternatives that eliminated the ostensible concerns created by that design could be eliminated by an alternative design that is likely to obtain… planning consent,’ he said.

But he added the neighbours proved ‘unwilling’ to accept any design except a ‘Victorian pastiche construction that would never have got planning permission’.

‘I have little doubt that the entrance pavilion design issue could have been resolved by discussion around one of the three alternative designs put forward by the claimant.

‘The failure of the defendant sensibly and proactively to engage in that process but rather to stand on legal formality is one that regrettably I am critical of,’ he added.

But he went on to say: ‘I accept that a reasonable decision maker in the position of the defendant was entitled to refuse permission for the claimant’s proposed design on aesthetics grounds in relation to the glazed form of the entrance pavilion, but only on the basis of the concession by the claimant that there is a reasonable prospect of obtaining planning consent…for an alternative’.

He added: ‘In my judgment, a reasonable person in the position of the defendant was entitled to object to a construction that extended beyond the rear building line of 89 Holland Park unless it could be shown that development was only practical if it extended as planned. At no stage has the claimant ever alleged that to be so.’

John McGhee QC, for the neighbours, told the judge that while Ms Hicks can still build on the site after the ruling, ‘The house that Ms Hicks will now build will be not more than half the size of the one she intended to build as she can’t build behind the rear building line of no 89. 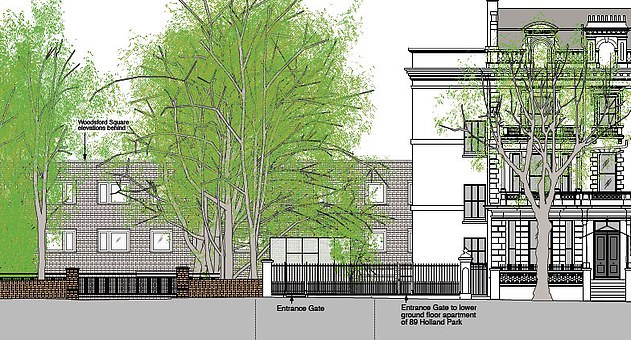 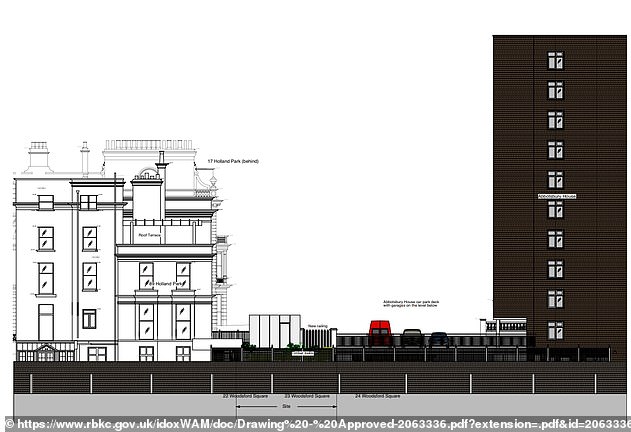 This image shows the street view of the new building, centre, with neighbours describing the entrance hall as a ‘glowing glass box’ 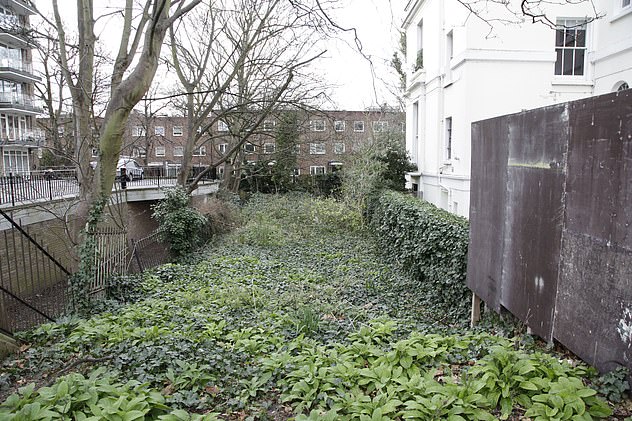 ‘We are better off aesthetically. When the defendants look out of the back of 89 Holland Park, they will see a garden on the site, not a property.

‘We succeeded on aesthetics. We won on the glass box and the extension at the rear.

‘We have won on the glass pavilion which my clients objected to,’ he added, asking for the whole of his client’s £1.3m costs bill to be paid by the architect.

Mr McGhee told the judge: ‘We don’t know how much the claimant spent on this trial but we know her costs of the first trial were £775,000.

‘Both sides have spent enormous amounts of money on this.’

Philip Rainey QC, for Ms Hicks, confirming she will still seek to build a smaller house with a redesigned entrance porch on the site, said of the neighbours’ win: ‘This is the most pyrrhic of pyrrhic victories.’

‘There is no suggestion that this development will have any effect negatively on the value of the defendants’ properties and yet they have spent £1.3m opposing it. This case is absolutely extraordinary.’

Judge Pelling went on to order Ms Hicks to pay 40 per cent of the neighbour’s court bill on top of her own costs.

An application for permission to appeal his ruling by Mr Rainey was refused.