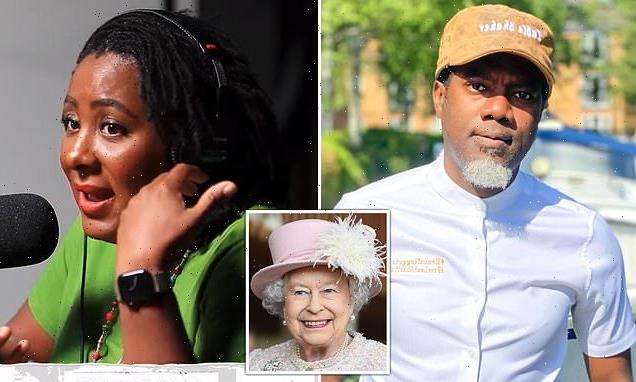 A best-selling Nigerian author has slammed a Carnegie Mellon professor for saying the Queen ignited the Nigerian Civil War – branding her comments ‘propaganda and pseudo history’.

Reno Omokri, who is also a priest and now lives in San Francisco, said he was ‘absolutely mortified’ by the ‘hideous’ claims Uju Anya aired last night.

He wrote it showed she was ignorant of the country’s history that has been ‘distorted’ and warped into creating bitterness in those who have not studied it properly.

Anya, who last week said she hoped the Queen died an ‘excruciating death’, took to a podcast to sling even more vicious attacks at the late Queen just days after she died in Scotland aged 96.

The linguistics professor at the Pittsburgh-based university bizarrely suggested the monarch was directly responsible for the death of millions during the Nigerian Civil War.

She also slammed the royal – who is being mourned by millions across the world, including in the African nation – for wearing what she claimed were ‘blood diamonds’ and said she sat on a ‘throne of blood’. 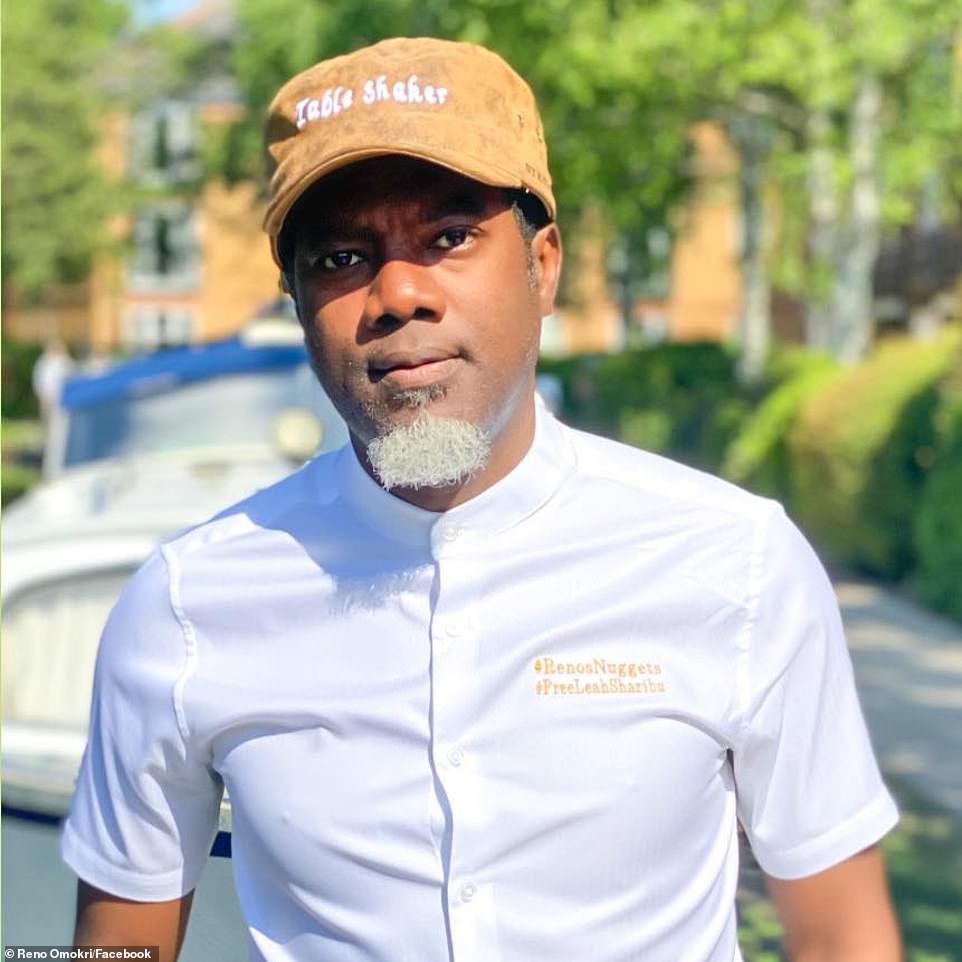 Reno Omokri, a Nigerian author and priest, slammed a Carnegie Mellon professor who has attacked Queen Elizabeth II for suggesting she was directly responsible for the death of millions in the Nigerian Civil War 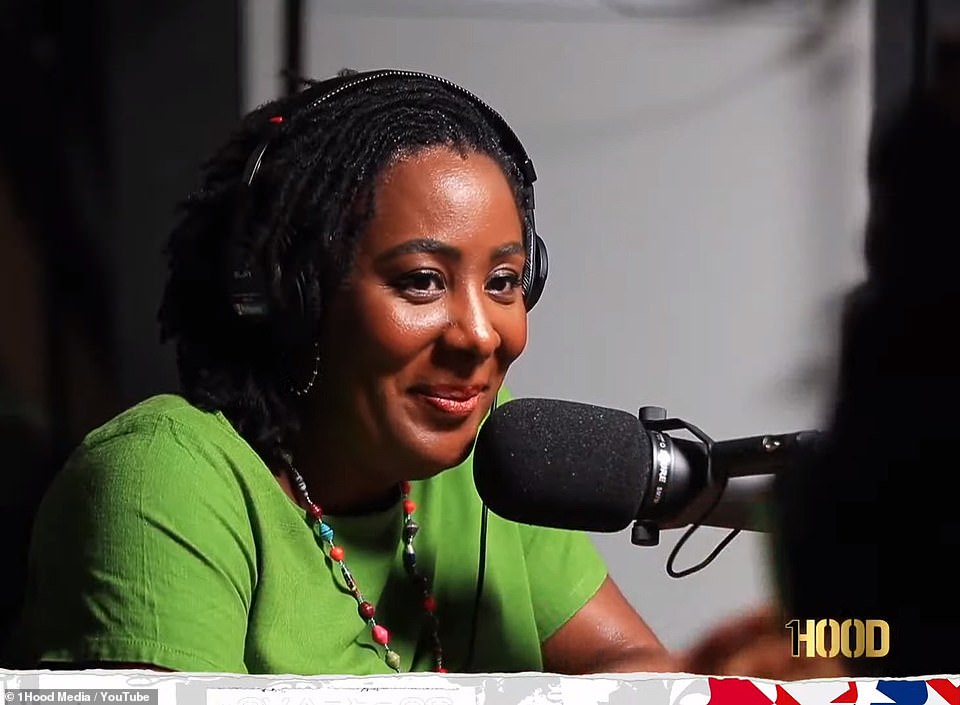 Uju Anya, a linguistics professor at the Pittsburgh-based university, wished the Queen an ‘excruciating death’ last Thursday and has since double down on her claims, arguing that she wore a crown made of ‘blood diamonds’

Anya has said her tweet last Thursday attacking the late Royal as the ‘chief monarch of a thieving, raping genocidal empire,’ and wishing that ‘her pain be excruciating’ was an ’emotional outburst’ because she was ‘triggered’ by the Queen’s death

The Nigerian Civil War was fought between the Nigerian government and a group of Christian Igbo who sought independence from a majority Muslim country.

It came after Nigerians to the North succeeded in a coup, and murdered military and civilian members of the Igbo people in 1967.

The Igbo people then declared their home in the Eastern region independent, calling it the Republic of Biafra, and put 33-year-old military officer Emeka Odumegwu Ojukwu at the helm.

But the Nigerian federal government did not want the oil-rich state to secede, and declared war.

It was backed by the British government, who provided the country with weapons to fight off the separatists. 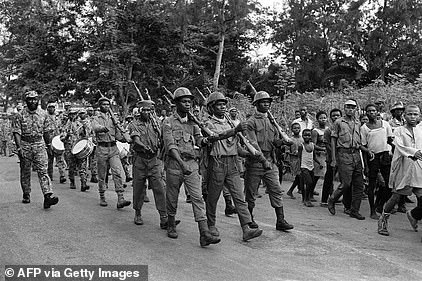 But the Nigerian government also had a policy of ‘no victor, no vanquished’ and was accused of weaponizing hunger and killing civilians in the war.

After 30 months of fighting, Biafra surrendered, and on January 15, 1970, the conflict officially ended.

It is estimated that more than one million people died in battle, as a result of ethnic cleansing, or because of starvation — which took the vast majority of lives.

Uju Anya’s claims the Queen was responsible was misleading as the monarch took no role in British politics despite it being branded as Her Majesty’s Government.

Omokri wrote in an op-ed that Anya must not understand Nigerian history — nor the ceremonial role the Queen played in British government if she believes that.

‘I was absolutely mortified by the hideous and historically inaccurate things that were said about the Queen and her family by a Nigerian woman living in America, whose name I will not dignify by mentioning,’ he wrote.

‘Let me tackle what the death of Queen Elizabeth II reveals about Biafra,’ he continued, referring to the once-separatist state.

Anya has said her tweet last Thursday attacking the late Royal as the ‘chief monarch of a thieving, raping genocidal empire,’ and wishing that ‘her pain be excruciating’ was an ’emotional outburst’ because she was ‘triggered’ by the Queen’s death.

Before she was born, she told The Guardian, her mother had to flee Nigeria during a civil war in which Biafra separatists sought autonomy for Nigeria’s Igbo people — an ethnic minority from the country’s south who faced persecution and pogroms in the north.

The UK government sided with its counterparts in Nigeria, supplying the government with guns to fight off the separatists in a deadly war that ended after more than 30 months.

Half of Anya’s family members died in the tragedy, she explained.

But Queen Elizabeth II did not have anything to do with the arms deal, Omokri pointed out in his op-ed on Thursday, as she only served a ceremonial role in the UK government.

‘Please let us stop pretending as if the late Queen Elizabeth II came to Nigeria and ignited a war,’ he wrote, saying it was instead ‘ignited by a series of unfortunate events that began with the cold blooded murder of 22 people from the Northern, Western and Midwestern region by people of mostly Eastern region origin, which led to a counter-coup by Northern Nigerian military officers on July 29, 1966, and the unfortunate pogrom of’66-’67.

‘She was a titular and ceremonial head of state, whose actions were limited to appointing the candidate who has won election directly or indirectly as prime minister, and declaring open the government.

‘She was a symbol,’ Omokri asserted. ‘She was not the initiator of the policies of the British government.

‘And even the British government is not to blame for the Nigerian Civil War,’ he said. ‘We must learn to take responsibility for our own actions. That was the result of the ill-advised January 15, 1966 coup.

‘These are the facts that we all should address, rather than blaming Queen Elizabeth II for a war she did not cause, not had any way of stopping.

‘We have all forgiven and moved on,’ Omokri concluded. ‘Yet, you want to reopen these old wounds and make them cancerous by blaming Queen Elizabeth II 50 years after the war? Leave the woman and her family to grieve in peace.’

He added: ‘By celebrating the Queen’s death, you are giving Nigeria a very nasty reputation that will affect all of us, not only you.

‘We cannot afford to be seen as a nation with anti-British and American sentiments, when we are not able to get a better deal from China and Russia.’

Omokri’s remarks come just hours after Anya doubled down on her claims about the former British monarch.

The Pennsylvania-based professor, 46, told the podcast This Week In White Supremacy Wednesday night: ‘This was a ruler. The very crown she had on her head signified the fact that she’s a monarch was made from plunder. Diamonds. Blood diamonds.

‘The throne that she was sitting on is a throne of blood. So you cannot say that she’s just this little old lady or this figurehead that really had nothing to do with anything and it was just the British government without relating it directly to her because she was directly benefiting, her very position as a monarch, the palace she lived in… were all paid for by our blood.’

She continued: ‘People expected me to be calm or to be… when the person who literally paid money for bombs and guns and military supplies to come and massacre your people is dying, you’re not supped to dance.’

When asked about her tweet that sparked outrage, she went on: ‘In other words, I said what I f****** said.’ She continued: ‘I had an emotional reaction. And an emotional outburst,’ she told the podcast hosts.

‘I was triggered by this news. It went deep into pain and trauma for me. Due to my family experience with the rule of this monarch.’

Anya, who said she was an ‘unapologetic, left-leaning’ provocateur used to contentious debate, said her tweet was ‘not planned, very spontaneous’ and ‘extremely real’.

‘I heard the chief monarch of a thieving, raping genocidal empire is finally dying. May her pain be excruciating,’ she wrote in a tweet to her approximately 70,000 followers.

She said she was surprised by how much attention the tweet received, but said it was designed to educate people.

‘I like to teach. I am fundamentally a teacher,’ she said. ‘And I bring evidence and support for the claims that I make.’

Other academics and writers also attacked the Queen in the aftermath of her passing, with Tirhakah Love, senior newsletter writer for New York Magazine, left, describing her 70-year reign as ‘devastating,’ and Jemele Hill, a writer for The Atlantic Magazine, saying journalists had a duty to cover what she called the ‘devastating’ impacts of Elizabeth’s reign

Eugene Scott of The Washington Post, also offered his opinions, asking when it would be a good time to talk about colonialism under Queen Elizabeth II

But Anya was not the only woke liberal trying to use the Queen’s death for social capital while the royals and millions mourned.

Other obscure writers piled in on her passing aged 96, with little-known journalists from The New York Times, New York Magazine and The Atlantic turned into online trolls as they also aired vile claims, with one promising to dance on her grave and Tirhakah Love, senior newsletter writer for New York Magazine, describing her 70-year reign as ‘devastating.’

He added: ‘You can’t be a literal oppressor and not expect the people you’ve oppressed not to rejoice on news of your death.’

Love, who was appointed in December, described by magazine editors as ‘creative and restless’ and ‘funny and surprising’, said he felt nothing but joy at her death.

‘Now I’m supposed to be quiet or, better yet, actually mourn what was a barely breathing Glad ForceFlex trash bag? Please, no,’ he wrote.

‘I just want to remind you that in the rest of the world, and I mean the actual world, most will be celebrating today.

‘We all have our methods of mourning friends; doing the electric slide on a colonizer’s grave just happens to be mine.’

Love knew his views on the Dinner Party newsletter would be provocative, tweeting: ‘lol make sure yall read dinner party’.

When someone reacted with mock horror, the Texan replied: ‘lmaooo whatchu meaannn???? im about to be as respectful and sweet as always!’

Meanwhile, in The New York Times, Maya Jasanoff, a history professor at Harvard University, where she focuses on the history of Britain and the British Empire, said it was wrong to ‘romanticize’ her reign.

‘The queen helped obscure a bloody history of decolonization whose proportions and legacies have yet to be adequately acknowledged,’ she wrote.

‘We may never learn what the queen did or didn’t know about the crimes committed in her name,’ she said.

‘Those who heralded a second Elizabethan age hoped Elizabeth II would sustain British greatness; instead, it was the era of the empire’s implosion.’

And a writer for The Atlantic magazine, Jemele Hill, chimed in on her Twitter account, saying journalists had a duty to cover what she called the ‘devastating’ impacts of Elizabeth’s reign.

‘Journalists are tasked with putting legacies into full context, so it is entirely appropriate to examine the queen and her role in the devastating impact of continued colonialism,’ Hill wrote.

That tweet was also met with a comment section full of critics, with one remarking ‘Lol ain’t no one gonna say a thing tho.’

Another journalist, Eugene Scott of The Washington Post, also offered his opinions, asking when it would be a good time to talk about colonialism under the queen.

Imani Gandy, a legal analyst at Rewire News, tweeted out a video of a group of men tap-dancing outside Buckingham Palace to the song Another One Bites The Dust.

‘The queen died and the Irish are already on it lol,’ she wrote.